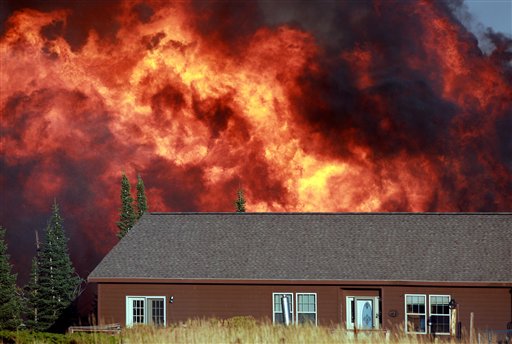 A wildfire burns near a home Sunday, Sept. 9, on Casper Mountain in Casper, Wyo. Residences and campgrounds were evacuated as the uncontained wildfire spread across the southeast portion of the mountain. 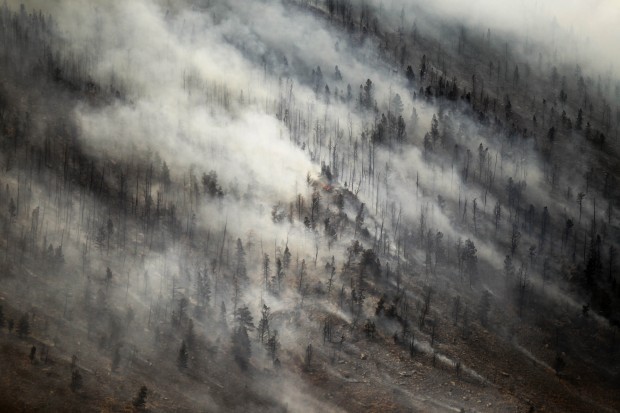 A sudden wind shift draws smoke back over the top of Sheep Mountain as the Squirrel Creek fire spreads Tuesday, July 3, 2012 near Woods Landing, Wyo.

CHEYENNE, Wyo. — This year's wildfire season was among the most destructive on record in Wyoming, with as many as 1,400 wildfires charring more than a half-million acres, state forester Bill Crapser said.

Normally Wyoming will see 700 to 750 wildfires in a year, and over the last 25 years Wyoming averaged only about 75,000 acres burned a year, meaning this year was about seven times worse than normal in burned acres, Crapser said Tuesday, noting final wildfire figures won't be known until the end of the year. He estimates 1,300 to 1,400 erupted in the state this year, burning 560,000 acres and costing about $100 million to fight.

The single largest fire that occurred was the Arapaho Fire, which burned about 98,000 acres in the Laramie Peak area in and around the Medicine Bow National Forest in southeast Wyoming.

This year's data rivals that of 1988, the year of the massive Yellowstone National Park wildfires that burned close to 700,000 acres, Crapser said.

In addition to 75 homes that were destroyed, the wildfires claimed as many as 60 outbuildings, he said.

"At the high point in July we had over 4,000 firefighters in the state from all over the country," Crapser said.

One firefighter suffered a stroke and died on the way to fight a wildfire, otherwise the most serious injury recorded was a firefighter who broke a wrist fighting a fire, Crapser said.

"Normally we would have a few fires in June and then our fire season would start in about mid-July," he said." This year, the first week in June we had several large fires and it just continued throughout the summer."

The vast majority of the fires were started by dry lightning, but at least five large fires have been ruled human caused.

"There's a couple still under investigation as far as the cause, but that's higher than we would normally see for large fires," Crapser said.

He attributed the increase in human caused fires to the extreme dry conditions rather than people being more careless.

The largest fire that was human caused was the Oil Creek Fire that burned about 62,000 acres in Weston County. It was started when a cross bar holding up a power line failed, dropping the power line to the ground where it sparked the fire, Crapser said.

While it cost $100 million to fight the fires, Crapser said about $60 million of that will be paid by the federal government because it involved federal forest and land.

Of the remaining $40 million, state and local governments are responsible for because the fires were on state and private land, some of that also will be paid with federal money reserved for fires that threaten homes and other buildings, he said.

Crapser already is concerned about what next year's fire season might bring because long term forecasts, while unreliable, foresee continued dry weather this winter.

Photos of the Alpine Lake Fire burning in the Shoshone National Forest.

Photos of the Blacktail Fire burning in Yellowstone National Park.

Photos of the Squirrel Creek Fire burning in the Medicine Bow National Forest in Wyoming.

Photos of the Arapaho Fire burning in the Medicine Bow National Forest in Wyoming.

Photos from the Fontenelle Fire burning in the Bridger-Teton National Forest.

Photos of the operations at the Cow Camp Fire near Wheatland, Wyoming.

A wildfire burns near a home Sunday, Sept. 9, on Casper Mountain in Casper, Wyo. Residences and campgrounds were evacuated as the uncontained wildfire spread across the southeast portion of the mountain.

A sudden wind shift draws smoke back over the top of Sheep Mountain as the Squirrel Creek fire spreads Tuesday, July 3, 2012 near Woods Landing, Wyo.