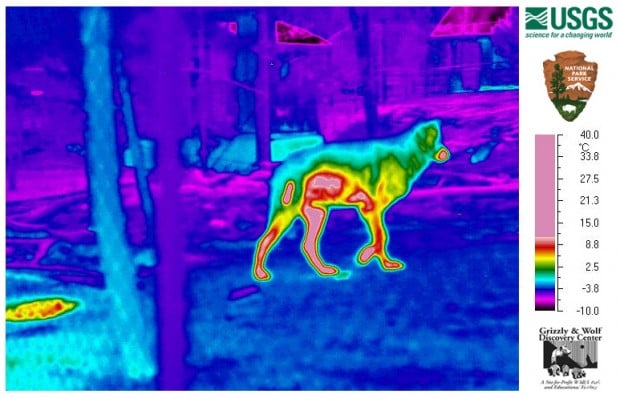 The bright red patch on the wolf's hindquarters in this thermal image of a captive wolf at the Grizzly and Wolf Discovery Center in West Yellowstone is where fur was shaved to replicate the loss of fur associated with sarcoptic mange. 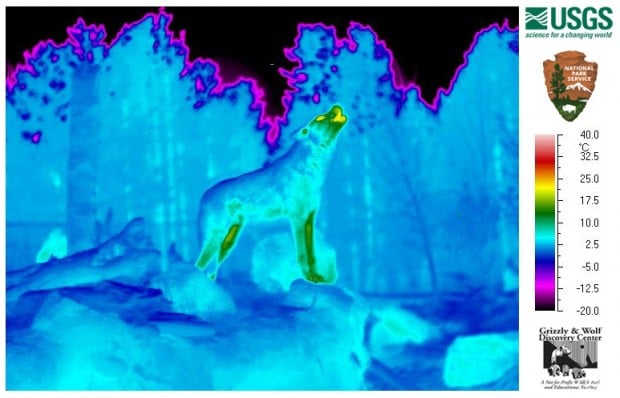 A wolf howls in this thermal image of a captive wolf at the Grizzly and Wolf Discovery Center in West Yellowstone.

Paul Cross found out it takes about five people to hold down an adult gray wolf so you can shave it.

Cross was cutting a patch of hair off a captive wolf in the Grizzly and Wolf Discovery Center in West Yellowstone as part of a study that he'll carry over to Yellowstone National Park in February. Cross is a disease ecologist with the U.S. Geological Survey in Bozeman.

By using remotely triggered thermal-imaging cameras, Cross is hoping to get a better idea of how sarcoptic mange affects wolves in the park. Shaving the wolf in the Discovery Center allowed Cross to get some baseline data.

The research is being conducted by the USGS Northern Rocky Mountain Science Center in collaboration with the National Park Service, Yellowstone National Park and the Grizzly and Wolf Discovery Center.

“Not much is known about mange,” said Doug Smith, Yellowstone's wolf biologist. “All the work done about it is descriptive. We think it's affecting the size of the population.”

Smith said the study will help park officials and the public better understand how disease affects the animals.

“Five years ago, disease wasn't even on the list of what kills wolves,” Smith said.

Right now, Smith said four or possibly five of the 10 wolf packs in the park have wolves with cases of mange, but none has a bad case.

Sarcoptic mange was introduced to the Northern Rockies by state wildlife veterinarians in 1909 as a way to wipe out wolves and coyotes.

The mites that cause the infection have been able to remain in the area by taking up residence on foxes and coyotes.

The mites burrow into the animal's skin, causing infections that lead to irritation.

As the animal repeatedly scratches its irritated skin, its fur falls out. Hair loss can range from patchy to about one-third or more of the animal's fur.

Cross is interested in how outbreaks of mange in wolves affect a pack's social dynamics, cohesion and a wolf's status; how many wolves survive infection; and what the caloric costs are of losing much-needed insulating fur during the winter.

Does the disease stay in the system, and at what level? He's also interested in whether the thermal-imaging cameras can detect mange more quickly.

Although the two-year study could provide interesting insights into the role that mange plays in wolf packs, Cross said there is no plan to use the study as a way to help infected animals.

“In general, we have very limited tools to do anything about any wildlife diseases,” he said.

Mange was first observed in the Greater Yellowstone Ecosystem around 2002, Cross said. By 2007 the disease was infecting wolves in Yellowstone National Park, peaking in 2009. Along the way, it is believed to have aided in the downfall of the park's pre-eminent pack in the Northern Range — the Druid pack, which winked out earlier this year.

Meanwhile, Mollie's pack, which forages in the interior of the park, contracted one of the worst cases of mange that Smith had ever seen, yet the pack stayed intact.

This February, Cross will set up two thermal-imaging cameras along with other remotely activated digital cameras inside Yellowstone.

The thermal-imaging cameras are being built by Montana State University engineers specifically for the project.

Cameras used at the Discovery Center cost about $40,000, so they were rented by the day to collect information.

The cameras will record the actual temperature of the animals photographed and save it onto a memory card, just like a digital camera.

Those images can then be collected weekly and downloaded to a computer for viewing.

Wolves are so well insulated that, when one is resting on the ground in the evening, it is hard for the thermal-imaging camera to differentiate the animal from a rock, Cross said.

“Like many cold-adapted animals, they're very good at insulating,” he said.

Once the wolves start moving around, the camera picks up heat signatures from the wolves' eyes and legs.

“Shaving patches in the wolves helps us make sure what our equipment should be detecting in the field,” he said. “And it gives us a baseline of healthy skin to compare to the infected wolves.”

Cross theorizes that infected wolves will have to increase their food intake to compensate for a loss of fur.

“We expect them to have to kill more to supplement their energy costs,” he said.

On the flip side, the wolves may be less-efficient hunters because of the loss of fur. He's also wondering if other wolves in the pack will help nurture a sick wolf by sharing food.

“It's a visible disease in a visible wildlife population,” he said. “We'll get information here that we won't get anywhere else about mange.”

In the 30 days that the park typically conducts flights to capture, collar, weigh and take blood samples from wolves, only four flights went up — the lowest number ever. Blizzards, cold and heavy snow disrupted the flights, as well as ground crews.

The data collected was enough to do a count — an estimated 110 wolves in 10 packs are roaming the park. That's up only slightly from last year when 96-98 wolves were counted in 14 packs.

The bright red patch on the wolf's hindquarters in this thermal image of a captive wolf at the Grizzly and Wolf Discovery Center in West Yellowstone is where fur was shaved to replicate the loss of fur associated with sarcoptic mange.

A wolf howls in this thermal image of a captive wolf at the Grizzly and Wolf Discovery Center in West Yellowstone.