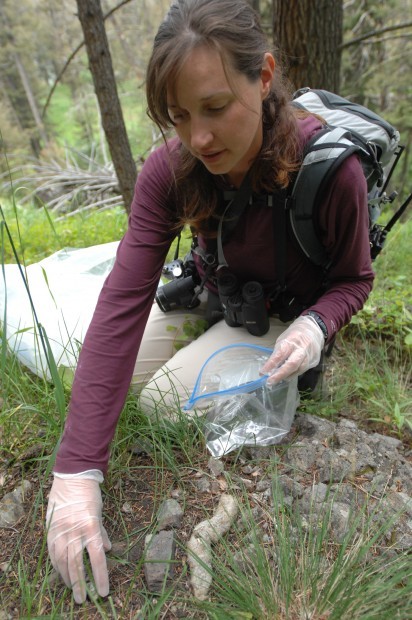 Bonnie Trejo, a graduate student at Humboldt State University in California, will later examine the scat in a lab to determine details, such as the age and type of prey consumed. 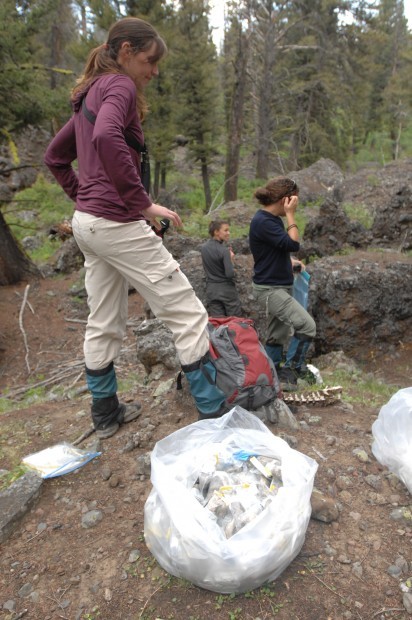 Bonnie Trejo stands next to a large garbage bag filled with smaller bags of wolf scat taken from a den site in Yellowstone National Park. Behind her are Brenna and Kira Cassidy of the Yellowstone Wolf Project. At top, part of a hoof, possibly from a calf elk, is found in a wolf’s scat. 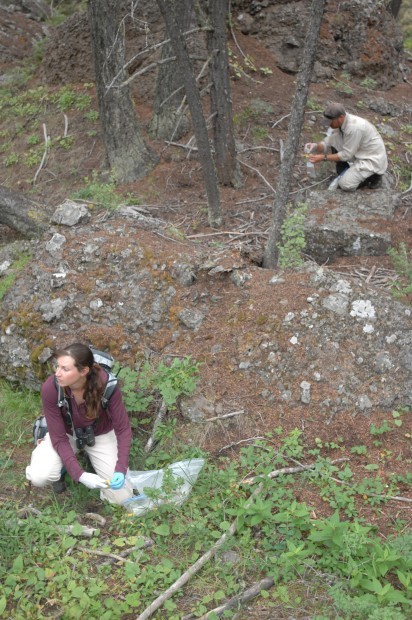 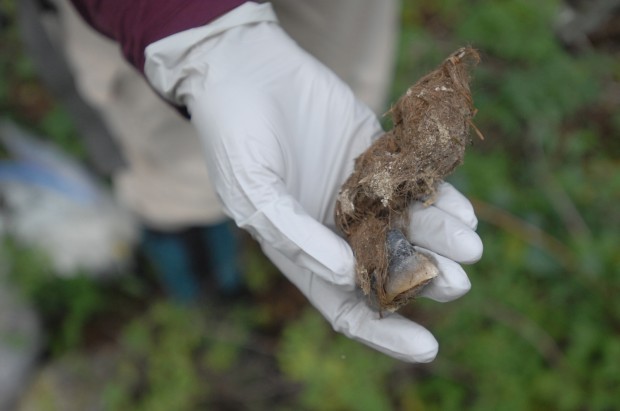 Bonnie Trejo collects a scat specimen from a wolf.
BRETT FRENCH Of The Gazette Staff

Her trek into the wilds of Yellowstone National Park to collect wolf scat from the Druid pack's den site on Friday had reaped plenty of samples, each in its own smaller bag within the trash bag.

"I'm not going to have a problem with sample size," she said to her crew of four helpers.

Trejo, 34, is conducting a study for her doctoral thesis at Humboldt State University that examines the diet of the park's wolves. One way to do that is by collecting and later examining wolf scat in the laboratory.

"Food habits are really important," she said. "It's directly tied to the health of wolves. It affects reproduction, community dynamics, how their diets overlap, seasonal fluctuations and prey composition."

Although a lot is known about what wolves eat in the winter, summer has been a more difficult puzzle for wolf researchers to solve.

"One of the hottest issues with wolves in the Northern Rockies is what are their impacts on the deer and elk populations," said Doug Smith, Yellowstone's wolf biologist. "They tend to eat the most in winter because elk are easier to catch."

Wolves eat better in the winter because the elk are bunched up. Snow makes it harder for the elk to elude wolves when pursued. Animals become weaker with less forage, and colder weather drains the elk's energy reserves.

For researchers, the packs and kill sites, which stand out against the snow, are easier to find. The packs are bunched up, wolves can be tracked in the snow and there is less vegetation for them to hide behind.

But, in the summer, elk travel to the high country, spread out and are in generally better health. That makes them a more difficult target for wolves. Consequently, wolves will often dine on smaller prey - deer, mice and beavers - and leave few remnants of the kill behind. As their prey spread out, so do the wolves. They're more active at night, making it harder for researchers to locate them in order to document kill sites and food habits.

Smith said that, if there were a chart showing wolves' food intake, the line would drop low from about July through December. From late December through May, as the effects of winter take hold, the wolves eat better. Weather plays a large role in when and how the line varies.

"We are close to an annual picture of what wolves eat," Smith said.

He added that there's a lot of variation, pack to pack, in what the wolves eat in the summer as they spread out in their range.

For decades, wolf researchers have collected scat to examine wolves' diets. Then, in 2001, Yellowstone began using radio collars to track wolves in the summer. The collars are fitted with GPS devices to mark the wolf's location every 30 minutes. By flying in a plane overhead every two weeks, Smith can download the data by radio signals.

Then, researchers can hike along the route and look for kill sites and scat to document the wolves' diet.

"About 30 percent of the time there's a kill," Smith said. "We calculate what they kill and eat in summer and compare it to winter."

The problem has been that the technology is new and failed frequently until the last three summers, when it worked "beautifully." The other problem is that the GPS locator collars are expensive, as well as more costly to monitor. After this year, the GPS study will end.

Trejo's research involving scat is a much cheaper means of determining a wolf's diet, though it is less precise. Consequently, her study will be compared to the GPS work to see if the data are comparable and consistent. She's also been collecting scat at the GPS locations to compare with the carcass remains at kill sites.

"One of the main tasks of my study is to take the age-old scat technology from the 1940s and compare it to the GPS cluster analysis," Trejo said.

Trejo said she'll spend six months to a year analyzing the scat she collects this summer, as well as about 1,000 samples taken from Grand Teton National Park. Back in the lab, she'll wash out the water-soluble portions of the scat and look at what's left - bones, maybe teeth, small hooves and lots of hair.

From her analysis, she should be able to rank prey importance, prey composition, the prey's age and compare it to the GPS analysis. Smaller scat, less than about 1.2 inches in diameter, that is not collected from den sites will additionally be tested for DNA to ensure that the scat came from a wolf and not another predator, like a coyote.

Because wolves are protective of their domain, scat collected from a den area is assumed to be from a wolf. Researchers wait a couple of weeks after they have confirmed that a den site has been abandoned before visiting.

Trejo will also compare diets between wolves in Yellowstone and Grand Teton and examine the seasonal differences in the wolves' diet. Based on studies of captive wolves, Trejo said, there is also a calculation to determine what proportion of the park's wolf scat researchers have collected.

"That will give us an idea if we have a representative sample," she said.

The crew of four helping Trejo on Friday included sisters Kira and Brenna Cassidy, biology professor Dave Unger and technician Nate Bowersock. In an average week, they will hike 40 to 45 miles to collect samples for the study.

"This will eventually help us find out what is the impact of wolves on elk," Smith said.

Since their visit to Yellowstone National Park's headquarters this winter and spring, wolves in the Canyon pack have been "model citizens," sa…

Bonnie Trejo, a graduate student at Humboldt State University in California, will later examine the scat in a lab to determine details, such as the age and type of prey consumed.

Bonnie Trejo stands next to a large garbage bag filled with smaller bags of wolf scat taken from a den site in Yellowstone National Park. Behind her are Brenna and Kira Cassidy of the Yellowstone Wolf Project. At top, part of a hoof, possibly from a calf elk, is found in a wolf’s scat.