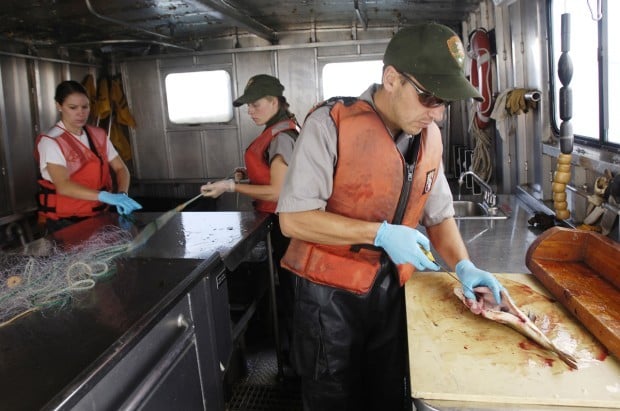 Fisheries technician Phil Doepke dissects a lake trout taken from Yellowstone Lake in August 2006 to see what it has eaten. The park plans to increase efforts to net the lake trout to help cutthroat trout, which are native to Yellowstone. 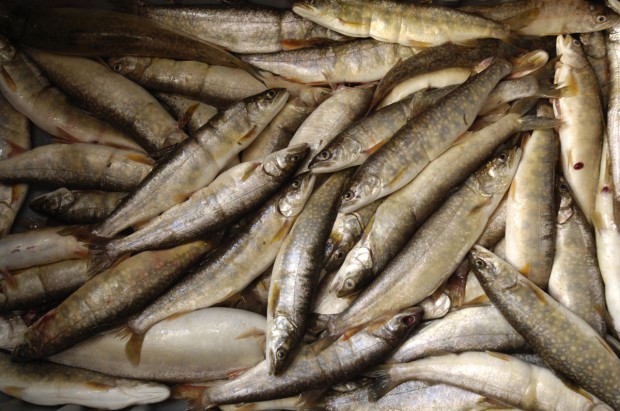 The size of fish caught by gill nets depends on the size of the net. This is a bucket of lake trout caught on Yellowstone Lake in August 2006.
Associated Press

CHEYENNE — Yellowstone National Park wants to bring in private contractors with large boats and more huge nets to get a handle on Yellowstone Lake’s pernicious and non-native lake trout once and for all.

The park last year netted more than 100,000 lake trout out of the lake — a record number but not exactly a good sign that efforts up to now have been effective.

“The numbers keep going up and up, which is a signal that the effort we’ve put out hasn’t been enough to stop the population growth,” said Yellowstone fisheries biologist Todd Koel.

Koel wants to double or triple netting efforts to help cutthroat trout, which are native to Yellowstone and important to the park’s ecosystem.

The stepped-up efforts would be part of a parkwide plan to restore cutthroat trout and arctic grayling in several waters where introduced fish have pushed out native species. The park is taking public comments on the possible new measures through April 30.

“We’ve had some success, but we felt like it was appropriate at this time to take a look at some more comprehensive ways to move forward,” park spokesman Al Nash said Monday.

If all stays on schedule, the new measures would get under way next year.

The cutthroat’s swimming in the streams feeding Yellowstone Lake makes them ecologically important. Entering shallow water exposes the fish to predators and cutthroat are an important food for grizzly bears, otters, bald eagles and other animals.

Lake trout, on the other hand, spawn in the lake and keep out of reach of most predators. And lake trout feed on cutthroat, growing ever-more voracious and large — 26 pounds is the record since lake trout began turning up in Yellowstone Lake in 1994.

The park has been catching lake trout using 1,800-foot-long nets placed off the lake bottom. The nets trap lake trout by their gills while allowing cutthroat trout and other smaller fish to swim through.

Plans call for switching to 1,000-foot-long nets that funnel fish into a box-shaped trap at their middle. More nets would be deployed than currently and they would be handled by professional crews, Koel said.

“It’s dangerous, so the people who know how to do it need to come and do it,” he said.

The park plans to continue its current practice of killing the trout, puncture their air bladders and dump them back in the lake where their biomass can recycle back into the ecosystem, Koel said.

In northwest Yellowstone, Koel said, such an approach could remove brown trout and help restore arctic grayling to Grayling Creek. In northern Yellowstone, the technique could remove rainbow trout and cutthroat-rainbow hybrids ahead of restoring genetically pure cutthroat to Slough and Soda Butte creeks, he said.

Koel said there’s no other way to successfully restore native fish to such streams.

“Much like the cutthroat of Yellowstone Lake, we can’t just sit by and watch that get lost. We have to address it,” he said.

Fisheries technician Phil Doepke dissects a lake trout taken from Yellowstone Lake in August 2006 to see what it has eaten. The park plans to increase efforts to net the lake trout to help cutthroat trout, which are native to Yellowstone.

The size of fish caught by gill nets depends on the size of the net. This is a bucket of lake trout caught on Yellowstone Lake in August 2006.
© Copyright 2021 Billings Gazette, 401 N Broadway Billings, MT | Terms of Use | Privacy Policy
Powered by BLOX Content Management System from TownNews.com.
You don't have any notifications.