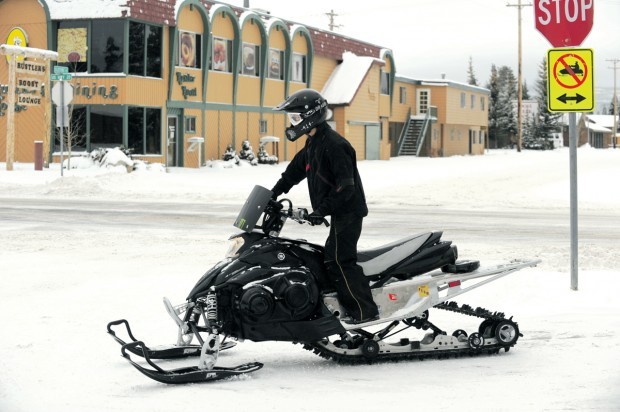 Plowing the road from West Yellowstone to Old Faithful would take snowmobiles and snow coaches out of that portion of the park in winter, but would make the park more accessible to the general public at a cheaper price, plowing advocates say. 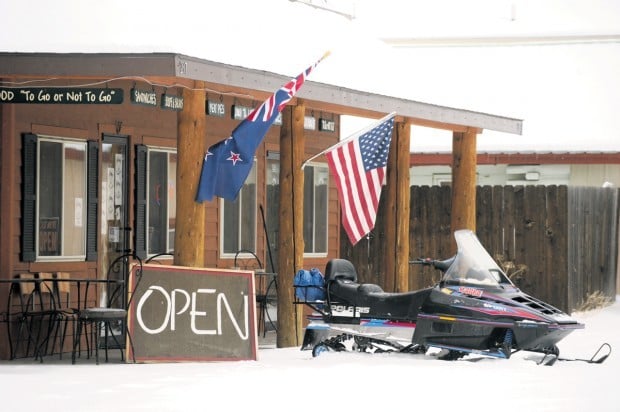 A lone snowmobile sits outside a West Yellowstone business in November. Some of the town’s businesses are hurting this year after a record low number of snowmobiles were allowed into Yellowstone National Park this winter.
BRETT FRENCH Of The Gazette Staff

Think of it as a populist push for plowing.

For too long, snowmobilers and environmentalists have controlled the debate about access to Yellowstone National Park in winter, said West Yellowstone businessman Doug Edgerton. He hopes to help change that.

Edgerton, who builds specialized track-setting equipment for cross-country ski trails, and David Robinson, who designed the Web site Plowyellowstone.org, are urging people to support plowing as a winter travel option between West Yellowstone and Old Faithful. The current system of allowing only limited snow coach and snowmobile travel into Yellowstone is damaging West Yellowstone’s economy, Edgerton said, and making the park the exclusive playground of the few who can afford to pay about $100 per adult to enter.

“The west side of the park is for the enjoyment of the few and wealthy, and that’s for the benefit of the public?” Edgerton said.

As evidence of the park becoming more exclusive, Yellowstone’s statistics show the park’s winter visitation dropping by more than 41,000 people from 1999 to 2009.

The National Park Service is crafting a new winter-use plan for Yellowstone. The agency plans to have its newest draft plan and environmental impact statement completed for public review by late winter or early spring 2011. The plan is expected to be completed by the fall of 2011 and implemented by November 2011.

“The Park Service should put in all reasonable alternatives, including plowing,” Edgerton said.

By allowing wheeled vehicles access through the West Entrance in winter, more vehicles can be allowed with lower emissions and at a cheaper cost to visitors, he said.

The scoping period for Yellowstone National Park’s winter travel plan ends on March 30. Chief planner John Sacklin has said that the Park Service always considers plowing and will again this time around — the fourth plan in more than a decade. In Yellowstone’s 1997 winter plan, the preferred alternative included plowing the road from West Yellowstone to Old Faithful for bus travel and some automobile use.

This year, the park is operating under a two-year interim rule. As part of that plan, Yellowstone cut the number of snowmobiles to the fewest ever allowed in the park, 318. Businesses in West Yellowstone, which for several decades was a humming burg in the winter thanks to snowmobiles, have suffered.

Rob Hermanson, owner of Gusher Pizza and Sandwich Shoppe in West Yellowstone, said it was his worst winter in the 10 years he’s been in business.

“Our business has gone downhill year after year after year as the Park Service has reduced the number of snowmobiles,” he said. “I believe that plowing the road would boost business in the winter as long as they allow individual public access” rather than busing the public in.

Environmental groups have long advocated for the Park Service to rid Yellowstone of snowmobiles and allow only snow coach travel. Although use of snow coaches is up, because of admission caps they haven’t been allowed to attract as many visitors as when snowmobiles had freer access.

The existence of fewer winter visitors may also be blamed on the uncertainty of the winter seasons, said Mary Sue Costello of the West Yellowstone Chamber of Commerce. It’s hard to market a product when the town isn’t certain what the winter season will bring. In the past, lawsuits have often resulted in changes to the Park Service’s winter plans. The other uncertainty is when, and how much, snow will fall. This month, the park closed the West Entrance to snowmobile traffic two weeks early because there wasn’t enough snow.

Hermanson said a good portion of the snow coach visitors never stop at his business. Instead, they’re bused from Big Sky Resort ski area, get on a snow coach for a park tour, and are bused back to Big Sky when they return to West Yellowstone. They never set foot in town, he said.

Plowing detractors say the cost of the work along with the snow berms that would be created alongside the road — making it difficult for animals to get off the roadway — is one reason not to support the idea.

Chris Kachur, who owns Tri-State Excavating in West Yellowstone and plows snow in the winter, disagreed. He said plowing would be cheaper than the park’s current grooming program and that newer plows push enough of the snow off the road to allow animals an escape route.

“Logistically, it would be no problem at all for the Park Service,” Kachur said.

The Park Service already plows the road from the park’s North Entrance near Gardiner to Cooke City all winter, attracting a steady stream of travelers and providing the only access for Cooke County residents to the outside world. Edgerton said that it’s only during the winter season that the North Entrance outpaces the West Entrance for visitors.

Kachur isn’t against snowmobiles. He used to be a test rider for Arctic Cat snowmobiles and still snowmobiles, but he said times have changed and West Yellowstone needs to adapt. Under the current winter access rules, it’s too expensive for most families to access the park’s West Entrance to Old Faithful in winter, he said, as costs start at about $100 per adult. Instead, he suggested that snowmobiles and snow coaches be staged inside the park for rides from Old Faithful to Lake or Canyon, or from Madison Junction to Norris and Canyon.

“You don’t have to shut snowmobiles completely out,” he said.

The chamber’s Costello said there’s no consensus among West Yellowstone residents about the best way to boost winter tourism. A recent town meeting allowed Edgerton and snowmobile advocate Clyde Seely to discuss the reasons why they believe their way is the right way.

Edgerton said plowing would bring more people from the regional market — southwest Montana, eastern Idaho and Salt Lake City. He contends that if the road from West Yellowstone to Old Faithful is not plowed, the town faces a bleak future.

“There will be a major turnover in this town,” he said. “And it’s really not just the economy that should be considered, it’s the basic fairness of should the most popular side of the park only be for the rich because it’s the easiest or most popular thing to do?”

People have until March 30 to submit their comments on Yellowstone National Park’s winter plan. On the Web, comments can be submitted by logging on to http://parkplanning.nps.gov/yell and clicking on the link to the winter use plan. Written comments can be sent to: Yellowstone National Park, Winter Use Scoping, P.O. Box 168, Yellowstone NP, WY 82190. Comments can also be hand delivered to the management assistant’s office in the headquarters building at Mammoth Hot Springs, Wyo. Once a draft plan is published, the public will be invited to comment.

Supporters of plowing the road from West Yellowstone to Old Faithful in the winter say another reason to support their alternative is that snowmobiles are not as popular as they used to be.

The International Snowmobile Manufacturers Association disputes that claim. According to the association’s figures, 1.65 million Americans registered snowmobiles in 2009, up from 1.63 million in 2008. More than 61,000 machines were sold in 2009. The association estimates that the sport of snowmobiling generated more than $28 billion in economic activity in North America in the 2008-09 season.

For more snowmobile facts from the association, go to www.snowmobile.org/stats-facts.asp.

Plowing the road from West Yellowstone to Old Faithful would take snowmobiles and snow coaches out of that portion of the park in winter, but would make the park more accessible to the general public at a cheaper price, plowing advocates say.

A lone snowmobile sits outside a West Yellowstone business in November. Some of the town’s businesses are hurting this year after a record low number of snowmobiles were allowed into Yellowstone National Park this winter.
© Copyright 2021 Billings Gazette, 401 N Broadway Billings, MT | Terms of Use | Privacy Policy
Powered by BLOX Content Management System from TownNews.com.
You don't have any notifications.