New research from Yellowstone Park has shown that a wolf’s peak hunting ability is short-lived, typically declining after about age 3. (Courtesy photo) 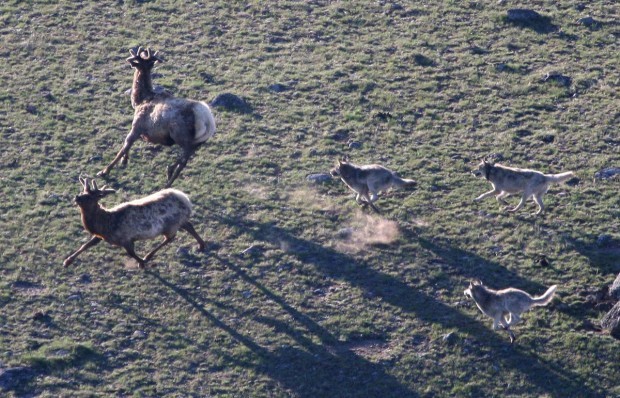 Wolf researchers in Yellowstone National Park are piecing together a better understanding of how wolves hunt. The second of three studies looked at the animal’s hunting ability vs. age. The first examined size and how it relates to hunting. The final paper will examine how group size determines wolves’ hunting success. (Courtesy photo)
BRETT FRENCH Of The Gazette Staff

A good wolf retirement plan is pretty simple - make sure that you live in a pack with other wolves 2 or 3 years old and that there are plenty of young pups.

That's because once wolves reach adulthood at about age 2, their peak hunting performance lasts only about one year, according to recently published research conducted in Yellowstone National Park.

Hunting ability steadily declines after age 3, roughly corresponding to when the animals breed, according to Dan MacNulty of the University of Minnesota, lead author of the study published in Ecology Letters. The other researchers on the project were the park's lead wolf biologist, Doug Smith, as well as John Vucetich, David Mech, Daniel Stahler and Craig Packer.

"The wolf population on the landscape is not a homogenous block," MacNulty said. "That seems obvious, but I think it sometimes gets lost.

"What my study really highlights is how the variation in age affects their use of the resource - which in Yellowstone is elk."

Smith said his reaction when he first read MacNulty's findings was disbelief, so he asked him to review the data.

"But, when you think about it, when half of the wolves are dead at 4 to 5, it makes sense," he said. "A lot of them are dead shortly after they reach their peak hunting ability."

The average wolf's life span in the park between 1998 and 2007, the study period, was six years. So wolves outside the prime hunting years need a Social Security-like supplemental feeding plan - meals on heels, so to speak.

That's where the benefits of living in a pack come in. The young toughs take down the game that helps feed the pups and old-timers. And, because maximum killing ability is short-lived, a pack wants plenty of young pups coming up to help out in the future.

"The point is they can only maintain maximum efficiency as a predator for a very short time, about 25 percent of their adulthood," MacNulty said.

Smith noted that the loss of ability, however, occurs more slowly than its acquisition.

"Their physical ability declines but they've learned how to hunt better," he said. "They're masking their decline in ability with wisdom."

He compared an older wolf to basketball superstar Michael Jordan at age 34, when he made a comeback in the NBA. Although not the aerialist he once was, Jordan could still score 20 points for the Washington Bullets.

"Predation is a physically demanding activity," MacNulty said, not to mention a dangerous one with a high possibility of injury or death.

That sometimes makes older wolves more reliant on the younger members of the pack for food.

MacNulty pointed to the Crystal Creek pack as an example. There, MacNulty witnessed the pack's older breeding pair sitting on the sidelines while the rest of the pack made a kill. Then the old-timers padded down to join the feast.

Up till now, MacNulty said, ecologists had classified the predatory pressure of adult wolves the same, no matter their age. But MacNulty said this study shows that the age of the pack members needs to be factored in to assess the pack's chance for a successful kill. Given two packs of equal size, the one with the younger adults should be more successful in bringing down prey.

"For each 10 percent increase in the proportion of wolves older than 3, there is a decline in the kill rate of about 10 to 15 percent," he said. "That was a surprising result. I wasn't expecting such a dramatic number."

How the information could be applied by wildlife biologists in the field is not certain, MacNulty said. Capturing wolves to assess their age is a costly undertaking.

"What we're saying is there's an effect we need to explore further," he said. "What are really the implications of this at the population level explicitly, that's what we're trying to assess now."

MacNulty is also working on another paper that will help complete the picture of wolf hunts, looking at group size and its effects on success. His previous research looked at the size of individual wolves and their success at hunting and their role in the hunt.

"When you take those three papers together, it gives us a clearer picture of how wolves hunt," Smith said. "We're really moving the yardstick ahead on how they kill elk."

Montana's inaugural wolf hunting season has been almost too successful in the Absaroka-Beartooth Wilderness.

Continuing the trend that began in May, visitation to Yellowstone National Park set a new record in September.

New research from Yellowstone Park has shown that a wolf’s peak hunting ability is short-lived, typically declining after about age 3. (Courtesy photo)

Wolf researchers in Yellowstone National Park are piecing together a better understanding of how wolves hunt. The second of three studies looked at the animal’s hunting ability vs. age. The first examined size and how it relates to hunting. The final paper will examine how group size determines wolves’ hunting success. (Courtesy photo)
© Copyright 2021 Billings Gazette, 401 N Broadway Billings, MT | Terms of Use | Privacy Policy
Powered by BLOX Content Management System from TownNews.com.
You don't have any notifications.