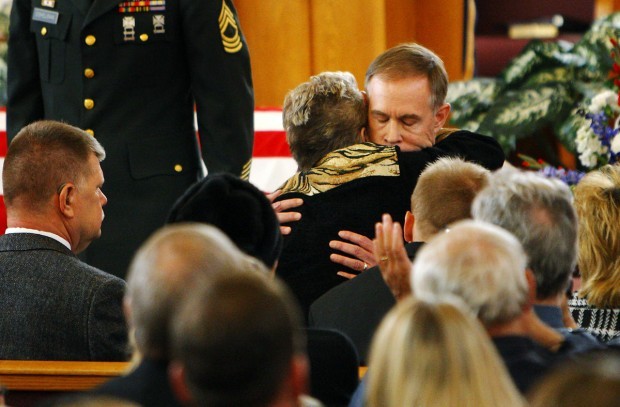 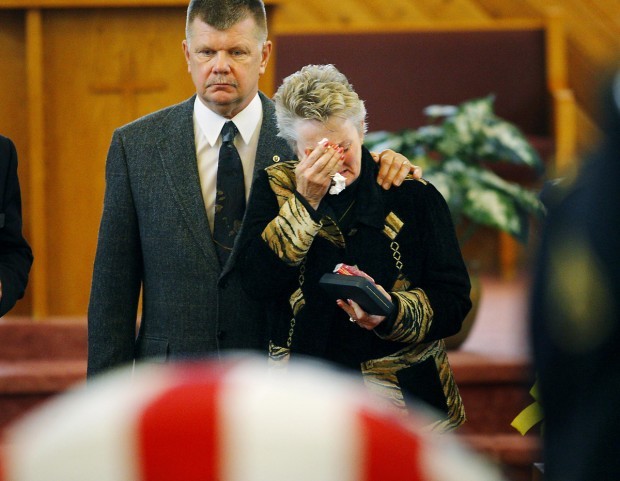 Myron and JoAnn Zorn follow the flag-draped casket of their son, Staff Sgt. Ryan Zorn, after his funeral service at the Wright Baptist Church on Tuesday in Wright, Wyo. Ryan Zorn, who was part of the 311th Military Intelligence Unit of the 101 Airborne Division, was killed on Nov. 16 when his armored vehicle overturned in northwestern Iraq. (Courtesy photo)
JOSHUA WOLFSON Casper Star-Tribune

WRIGHT — Staff Sgt. Ryan Zorn gave a simple answer when his father once asked him to consider leaving the military.

Zorn, who died last week in Iraq, was remembered Tuesday at his funeral as a model soldier who gave his life for a cause he passionately believed in.

“He had an undying loyalty to his country, to his family and to his God,” said classmate Jeri Gibson, one of more than 300 people who packed Wright Baptist Church for the service.

Zorn, 35, died Nov. 16 when his armored vehicle overturned near the city of Tal Afar in northwestern Iraq. The Wright resident had been helping Iraqis develop communications and intelligence operations as part of the 311th Military Intelligence Unit of the 101st Airborne Division.

In his 16 years in the U.S. Army, Zorn served tours in Saudi Arabia, Korea, Germany and Iraq. He was a battle-hardened officer who embodied Army values, said Brig. Gen. Tom Cole, who addressed mourners during the 75-minute service.

“Ryan was not a complainer,” Cole said, standing near Zorn’s flag-draped casket. “He would just say a simple ‘Roger.’ That was his hallmark.”

Cole presented Zorn’s mother, JoAnn, with a Bronze Star earned by her son.

“It’s not just our soldiers who sacrifice so much for our freedoms,” the general told mourners. “Families give so much.”

While stationed in Iraq, Zorn made sure the soldiers under his command received care packages. A deeply religious man, when back in Wyoming he’d ask his pastor to pray for his men’s safety.

“He was proud of what he did, and he died doing what he believed in,” said his father, Myron.

Zorn never married, explaining that he didn’t want to find a wife only to be sent back to war. But he had a close relationship with his parents and other family members, said the Rev. Clay Alexander, who officiated the service.

Alexander read from two letters written by Zorn’s nieces. In one, Paige Zorn called her uncle a hero. “He’s a little chubby and had short, spiky hair,” she wrote. “He is really cool.”

Mourners — including Gov. Dave Freudenthal and Sen. Mike Enzi — watched a video that showed Zorn grow from a skinny, blond boy into a burly soldier, posing with other troops in front of a mural of former Iraqi leader Saddam Hussein.

The video also included footage of the scene in Gillette on Sunday, when thousands of people lined the streets to watch a hearse take Zorn’s casket from the airport to a funeral home. Dusty McClintock attended that procession and made the 50-minute drive to Wright for the funeral.

“We just wanted to come out and show our support,” said McClintock, who traveled with a group of about 10 motorcyclists.

Zorn was born in North Dakota but moved shortly after his birth to Upton, in northeastern Wyoming. His schoolmates described him as a big-hearted person with a constant smile.

He didn’t have a single enemy, said Hidie Bland, who traveled to the funeral from Sheridan.

Friends said Zorn was soft-spoken but had a hearty laugh. He enjoyed athletics and possessed an encyclopedic knowledge of sports that some claimed rivaled the ESPN staff’s.

“He had a distinct laugh,” Glodt said. “Everybody knew it was Ryan when they heard it.”

Even after Zorn joined the military, Glodt maintained contact with his former student. The educator remembered the pride Zorn had for the military’s mission in Iraq.

“He kept telling all of us that we were over there for a reason and helping out the Iraqi people,” Glodt said. “He was proud to be part of it.”

Myron and JoAnn Zorn follow the flag-draped casket of their son, Staff Sgt. Ryan Zorn, after his funeral service at the Wright Baptist Church on Tuesday in Wright, Wyo. Ryan Zorn, who was part of the 311th Military Intelligence Unit of the 101 Airborne Division, was killed on Nov. 16 when his armored vehicle overturned in northwestern Iraq. (Courtesy photo)
© Copyright 2021 Billings Gazette, 401 N Broadway Billings, MT | Terms of Use | Privacy Policy
Powered by BLOX Content Management System from TownNews.com.
You don't have any notifications.