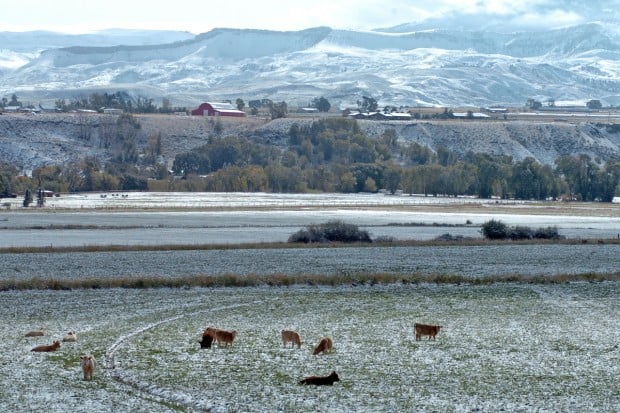 Cows graze on abundant green grass on Thursday despite snow accumulations of 3 inches or more south of Cody. Weekend temperatures are expected to approach record lows of 8 degrees. 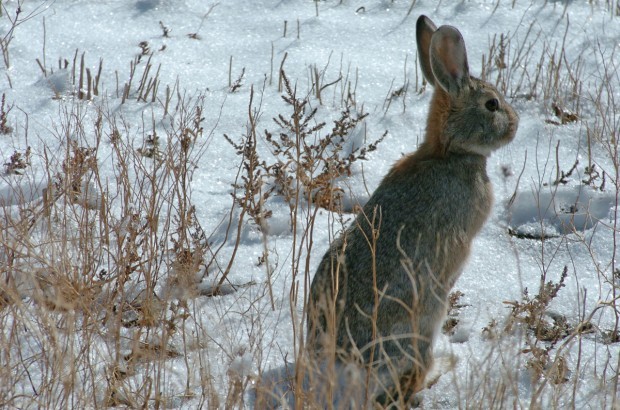 A cottontail rabbit looks for green grass under a blanket of 3 inches of snow that fell south of Cody on Wednesday night and Thursday. Weekend temperatures are expected to approach record lows of 8 degrees. 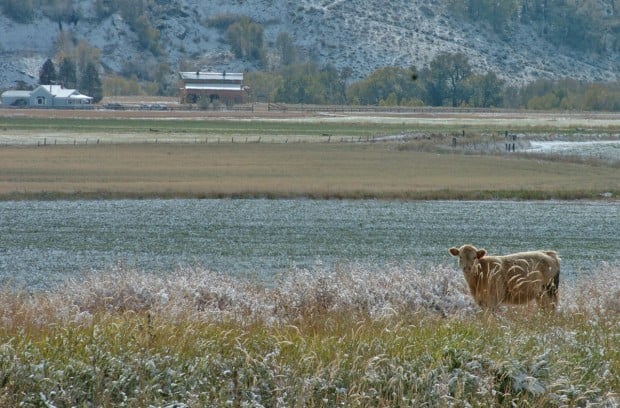 CODY - Early snows around the Bighorn Basin have hampered the efforts of everyone from farmers to road contractors, and a frigid blast of arctic air expected this weekend could push temperatures close to record seasonal lows.

"There is a strong cold front moving through the Bighorn Basin," said Bill Murrell, a forecaster with the National Weather Service in Riverton. "We have a strong northwesterly flow from the arctic moving down, bringing extreme cold weather for October."

Low temperatures on Friday and Saturday nights in Cody could reach 8 degrees, a temperature not seen here on Oct. 10 since 1919, Murrell said. The last such cold snap in recent memory for this time of year was in 1985, when there was an Oct. 10 low of 15 degrees.

"Snow is likely for Friday, and Cody could see another 1 to 3 inches, with slight chances of snow for the remainder of the weekend," Murrell said, adding that highs for Friday and Saturday may not rise above the mid-20s.

Average temperatures for Cody at this time of year range from a high of 63 to a low of 38.

"So with temperatures 30 to 40 degrees below average, this is an extreme event for the middle of October," he said.

The unusually cold temperatures have beet farmers across the region worried, but Powell vegetable farmer Rick Martin is concerned about his pumpkins.

Martin said that he greatly expanded his pumpkin and squash plantings this year to accommodate increasing local demand, but a cool summer has meant a late harvest, leaving nearly all of his gourds stranded in muddy fields.

"If it gets down to 15 degrees, they'll start to freeze and split. But if we get a little snow cover, it will help insulate them, and they may be all right," said Martin, whose crops are sold through a Powell grocer and at his own Straw Igloo vegetable market.

"They're too spread out to tarp, and I can't even take a light garden cart in because it sinks into the mud, so we're just playing the weather to see what it does," Martin said.

Highway contractors around Wyoming are also watching the weather, as some paving projects are stalled until the arrival of warmer, drier weather, said Cody Beers, spokesman for the Wyoming Department of Transportation.

"Most of our paving occurs late in the season, so when we do get these really early fall snowstorms, it kind of grinds things to a halt," Beers said.

With paving crews requiring dry conditions and preferring temperatures of 40 degrees or higher, work is halted on paving a six-mile section of the Togwotee Pass along U.S. Highway 26, between Dubois and Jackson.

"We're a little concerned about it right now, because we haven't even started paving on that road," Beers said, adding that any dirt sections of the road must be paved before winter to allow snow plowing on the year-round pass.

"We're pushing the envelope a little bit, but we're confident we'll get to the point where the road will be passable this winter," he said.

Resurfacing work is nearing completion, but also stalled due to bad weather, along a six-mile section of Wyoming Highway 291, or the South Fork Road, near Cody.

That project should wrap up before winter, Beers said, adding that construction will continue throughout the winter on widening and resurfacing of U.S. Highway 14-16-20 between Cody and Powell.

Beers urged drivers to slow down in work zones, and to be especially cautious on bridges, where ice and snow often accumulate first, even when roads are clear.

Cows graze on abundant green grass on Thursday despite snow accumulations of 3 inches or more south of Cody. Weekend temperatures are expected to approach record lows of 8 degrees.

A cottontail rabbit looks for green grass under a blanket of 3 inches of snow that fell south of Cody on Wednesday night and Thursday. Weekend temperatures are expected to approach record lows of 8 degrees.

A cow grazes on abundant green grass on Thursday despite snow accumulations of three inches or more south of Cody. Weekend temperatures are expected to approach record lows of 8 degrees.
© Copyright 2021 Billings Gazette, 401 N Broadway Billings, MT | Terms of Use | Privacy Policy
Powered by BLOX Content Management System from TownNews.com.
You don't have any notifications.