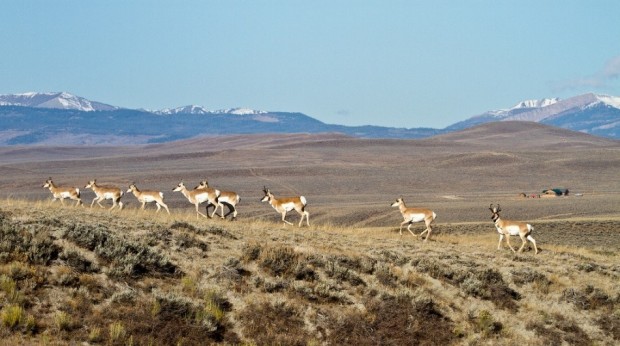 A small herd of pronghorn move through Trappers Point during their annual migration between Grand Teton National Park and the Upper Green River Basin in Wyoming. 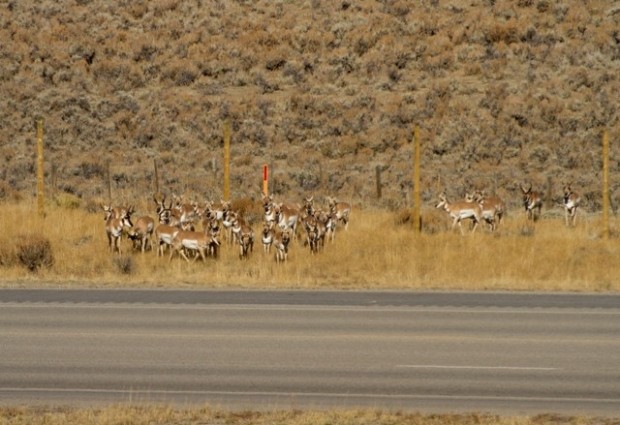 Pronghorn gather on the shoulder of Highway 191 during their fall migration between Grand Teton National Park and the Upper Green River Basin. 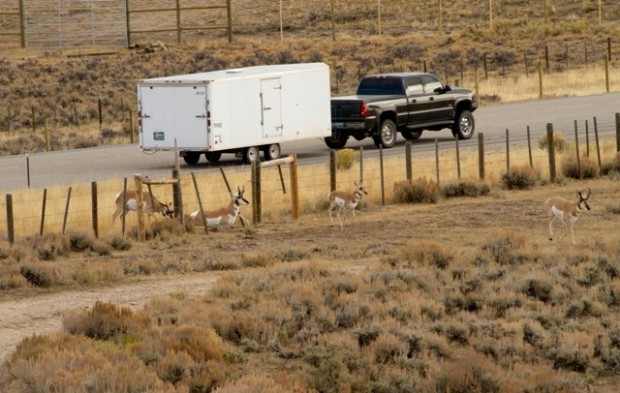 Roads, fences and natural gas fields serve as hazards to thousands of pronghorn that migrate each season between winter and summer ranges in Wyoming. 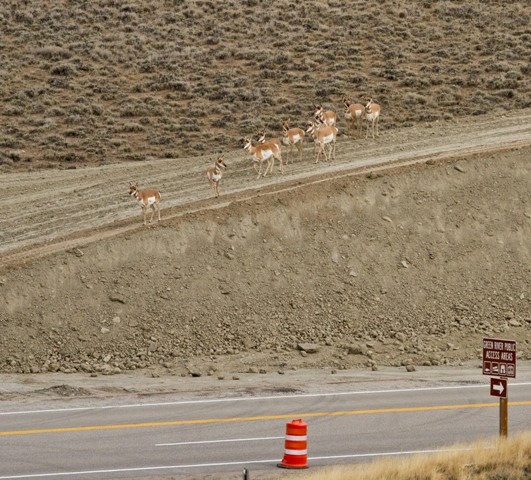 On their fall migration, pronghorn navigate a berm near Highway 191 where the Wyoming Department of Transportation is building a series of wildlife underpasses and overpasses. 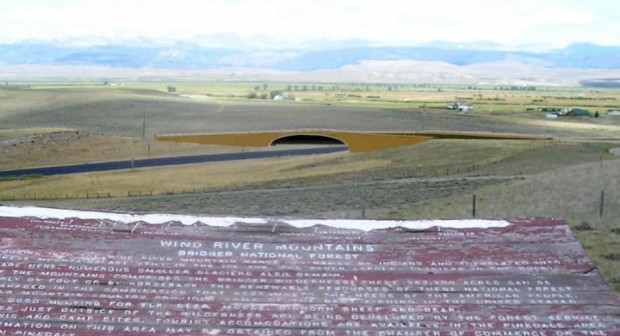 The Wyoming Department of Transportation is building the state’s first wildlife overpass on Highway 191 as part of a bigger project to help wildlife navigate the busy highway.

CODY, Wyo. — Throughout the fall, Jon Beckmann watched as thousands of pronghorn dodged cars and trucks while crossing a busy Wyoming highway during their annual migration.

It’s something the pronghorn have been doing for as long as there have been highways. But this time the animals encountered something different, and Beckmann, a biologist with the Wildlife Conservation Society, was there to watch.

“We observed very uneasy behavior in the pronghorn as they approached Highway 191,” Beckmann wrote in a National Geographic blog. “One group of animals was led by an adult doe that anxiously approached the highway and made several attempts to run across.”

In that 23-mile stretch of Highway 191, between Pinedale and Bondurant, the Wyoming Department of Transportation is building a series of wildlife crossings to help pronghorn and other big game complete their annual migration between Grand Teton National Park and the Upper Green River Basin.

Billed in part as a public safety measure, the $9.7 million project was set last December by the Wyoming Transportation Commission. The work includes six wildlife underpasses and two wildlife overpasses. The overpasses are the first in Wyoming designed for wildlife.

Beckmann and fellow Wildlife Conservation Society biologist Renee Seidler spent several weeks at the project site this fall. As winter closed in on Grand Teton National Park, they watched 1,000 pronghorn move east and noted their behavior as they encountered the busy construction site for the first time.

While the animals appeared confused at moments, Beckmann said, they weren’t deterred by the changes to the landscape. The doe he mentioned in his blog turned back across the highway, leading the herd “like a school of fish” this way and that. Other groups of pronghorn, led by more confident animals, “proceeded with poise” across the roadway.

The willingness to cross at certain locations in the project area gives Beckmann hope that the animals, no matter how skittish, will learn to use the wildlife crossings once they’re finished next fall.

“The construction was certainly something new in their environment,” Beckmann said. “We observed over 1,000 animals cross at those locations. It’s my guess that the pronghorn will use the overpasses more. It’s just the nature of pronghorn.”

An estimated 35 million pronghorn roamed North America in the early 19th century. With habitat loss, only 700,000 remain, and more than half of them live in Wyoming.

Thousands of pronghorn embark on the 90-mile journey from Grand Teton to the Upper Green each fall and reverse the trip in the spring. The journey takes a healthy animal roughly three days to complete — the entire population, roughly six weeks. It is the longest ungulate migration in the lower 48 states.

For the past six years, Beckmann and other Wildlife Conservation Society biologists have collared dozens of animals to collect GPS data on when the population moves and the routes the animals take. They’ve documented pronghorn survival rates and the obstacles encountered along the migration, including the natural gas fields at the Pinedale Anticline, barbed-wire fences and Highway 191.

“The animals migrate to find food, fawn, mate and look for suitable habitat and other resources they need to survive,” Beckmann said. “The ability to migrate from summer range to winter range is especially important in places that have harsh winters, like western Wyoming.”

For Beckmann, the principal investigator for several wildlife projects across the Greater Yellowstone Ecosystem, the Highway 191 project marks a big step in road ecology and the understanding that highways do impact wildlife movement and alter animal behavior.

As rural as Wyoming is, thousands of animals still die on the state’s roads each year. One gas-field water hauler killed 20 pronghorn in a single collision in 2007.

But highways do more than kill an occasional individual animal, Beckman said. They slice migration corridors and fragment already shrinking habitats, including that in the Upper Green River Basin, where mule deer numbers have fallen as much as 47 percent in the past five years.

“That’s really what we’re talking about, ways to mitigate the impacts of roads,” Beckmann said. “This project is really a win-win. It benefits the wildlife and it maintains these migrations. It also benefits the traveling public. Anytime you hit an ungulate going 65 to 70 mph, it’s going to be a human safety issue.”

According to state figures, two people on average are killed and 140 are injured each year in roughly 1,800 motor-vehicle collisions with Wyoming wildlife. The public safety argument for the crossings is strong, as is the need to reduce the impacts of human development on the natural environment.

When discussing the crossings, Beckmann points out that wildlife projects like this aren’t new to the western U.S. and Canada. Elaborate overpasses in Banff, Alberta, are used by grizzly bears and moose, and they now serve as models for reconnecting habitat cut by major highways.

Crossing structures in Arizona also have aided that state’s elk herds. Washington state is considering similar projects near Snoqualmie Pass, as is Nevada.

In Wyoming, smaller projects have already proven successful, and remote cameras have captured grainy images of the common users. An underpass on Highway 789 near Baggs is frequented by deer, elk, bobcats and coyotes. Moose have been seen using the underpass at Nugget Canyon on U.S. 30 near Kemmerer.

But the Trappers Point project on Highway 191 marks the first time that Wyoming has built new underpasses in conjunction with an overpass, and it’s the state’s first attempt at designing a crossing with pronghorn in mind.

Beckmann doesn’t think the pronghorn will use the underpasses, although they have done so at other locations. Their fondness for the open range is partly due to their preference for good line of sight and being able to see long distances — something only an overpass can offer.

Based on their observations this fall, Beckmann and Seidler believe the crossings will pay off when the animals return next fall to find the project finished and the machinery gone. Whether they pass above it or below it, Highway 191 won’t be as hazardous to the migrating animals.

“Wildlife will benefit — the pronghorn and mule deer — and multiple other species will benefit as well,” Beckmann said. “It was a smart decision by everyone involved to make sure there were overpasses and underpasses at those critical locations.”

A small herd of pronghorn move through Trappers Point during their annual migration between Grand Teton National Park and the Upper Green River Basin in Wyoming.

Pronghorn gather on the shoulder of Highway 191 during their fall migration between Grand Teton National Park and the Upper Green River Basin.

Roads, fences and natural gas fields serve as hazards to thousands of pronghorn that migrate each season between winter and summer ranges in Wyoming.

On their fall migration, pronghorn navigate a berm near Highway 191 where the Wyoming Department of Transportation is building a series of wildlife underpasses and overpasses.

The Wyoming Department of Transportation is building the state’s first wildlife overpass on Highway 191 as part of a bigger project to help wildlife navigate the busy highway.