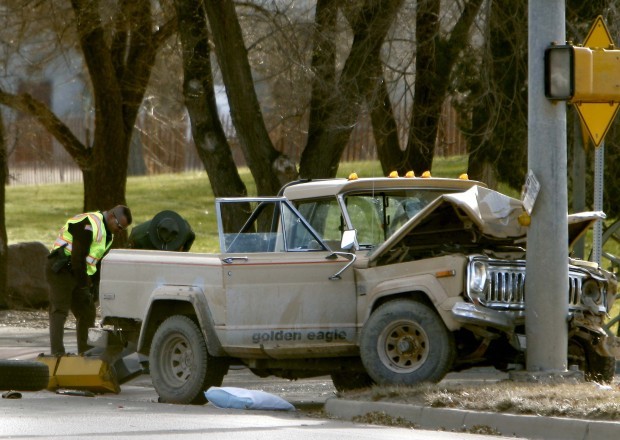 Police investigate the scene of an accident at the intersection of 13th and Wyoming Boulevard near Mills, Wyo., on Nov. 14. The passenger in the truck died from his injuries shortly after being transported to Wyoming Medical Center. The driver is accused of huffing prior to the crash. 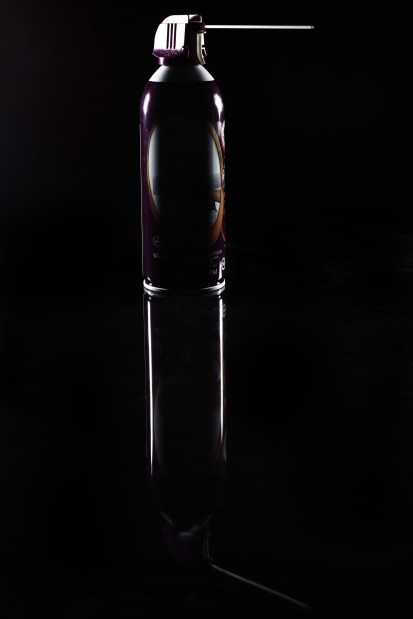 Inhaling chemicals in household products with the intention of getting high — called huffing — is one of the most common forms of drug use, according to the National Inhalant Prevention Coalition. 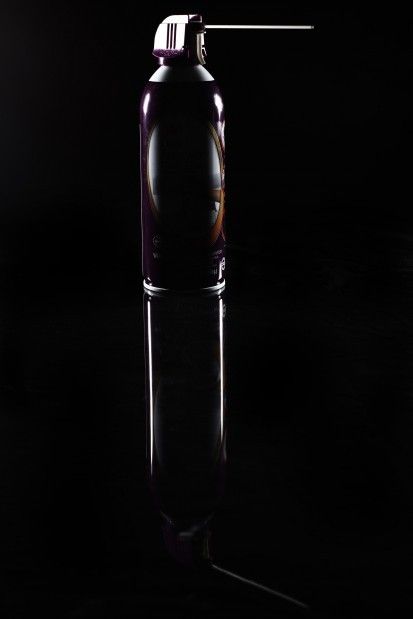 CASPER, Wyo. — Sitting in a treatment specialist’s dimly lit office one day last week, a dark-haired woman explained how one can costs roughly $5. She went through 15 or 20 a day. Each one lasted about 45 minutes. Each hit brought a short-lived but powerful high.

“If you talk to people about it, they will tell you it’s the highest they have ever (been),” she said.

The 26-year-old Casper resident and client of the Natrona County Adult Drug Court spoke with the Star-Tribune on the condition of anonymity because of the stigma around her drug of choice: chemicals found in many household products.

She began, like experts say most people do, in her early teens. A friend introduced her. A towel over the nozzle helps tame the bad taste. The high is immediate. It lasts about 30 seconds. It’s addicting.

“I don’t know, really, how people come around to start huffing air duster,” she said. “But now, it’s just like another drug. It’s like alcohol or (marijuana).”

Huffing, a term used to describe inhaling chemical vapors with the intention of getting high, is one of the most common forms of drug use, according to Harvey Weiss, executive director of the National Inhalant Prevention Coalition.

More people get high by huffing than by meth, heroin, cocaine “and all of the other drugs that get all the attention,” Weiss said. “The size of the problem is far bigger than most people are willing to accept.”

“I’m guessing Casper has a problem with it as big as any big city,” said Eric Fernelius, a therapist with the Natrona County Adult Drug Court. “In my opinion, it’s all the way across (generations). But for the most part, we’re seeing it in younger people. It’s easy to get, it’s cheap and it’s accessible.”

It’s also not something drug users might just reach for when they cannot find illegal means.

“It becomes a preference, I’m sure,” Fernelius said, “because it is so immediate.”

Toxic substances that can lead to intoxication are found in paint thinners, gasoline, glues, spray paints, deodorants, aerosol cooking oils and felt-tip markers. But authorities say the most popular are in the cans of compressed air commonly used to clean electronic equipment.

According to a 2008 survey by the National Institute on Drug Abuse, 729,000 people age 12 or older had used inhalants for the first time within the previous year. Of that number, 70 percent were under the age of 18. The survey indicated that the use of legally purchased, toxic substances as a means to get high is most prevalent among junior high students.

“There is no secret among kids when it comes to these inhalants,” Weiss said. “It’s adults who don’t want to talk about it.”

In 2010, Casper police made five arrests directly related to huffing. This year, officers have made 15: nine for the illegal use of a toxic substance, four for driving under the influence and one for vehicular homicide.

Police say the DUI and homicide charges each stem from drivers huffing behind the wheel and wrecking.

The homicide charge came after a Jeep hit a utility pole in November, killing a 50-year-old man riding in the passenger seat. The driver, 39-year-old Heather Christensen, admitted to purchasing two cans of compressed air cleaner at Walmart just before the crash. She huffed out of one of the cans before leaving the parking lot, according to an arrest affidavit from the case.

Christensen, who faces up to 20 years behind bars if convicted, has a preliminary hearing scheduled for Tuesday in Natrona County Circuit Court.

Two and a half years ago, a Ford F-250 hit a station wagon head-on in Casper. The truck drifted across three East Second Street lanes before the collision. The driver of the station wagon, a 72-year-old grandmother, died. The driver of the truck — 23-year-old Justin Daniel Breazeale — is serving an 18- to 20-year prison sentence after being convicted of aggravated vehicular homicide. Police say he was huffing moments before the crash.

In both wrecks, evidence suggests the vehicles’ brakes were not applied prior to the collisions. Authorities say this is because of the blackouts associated with huffing.

The drug court client became one after she was arrested in August following a car wreck in the parking lot of a local eatery. At the time, she had been huffing for four days straight. She wrecked about 11 a.m. after roughly five hours of steadily inhaling “duster.”

“All I remember is pulling into McDonalds,” she said. “Then I don’t remember anything. When I wrecked, I felt the impact because I hit my mouth on the can. You’re driving and you don’t even realize you’re doing it because you’re blacked out.”

Why drive and huff?

“For me, I would go get it and I wouldn’t want to wait to go home,” she said. “It’s like people drinking and driving. You don’t really think about what’s going to happen, or what could happen. It’s just — you want to get high.”

The concentrated chemicals found in the substances can lead to irregular, rapid heart rhythms and heart failure within minutes of prolonged sniffing, according to the NIDA. This syndrome is known as “sudden sniffing death.”

What troubles Fernelius is the perception that air duster is only canned air.

Those chemicals, according to the NIDA, can inflict serious damage to the heart, brain, lungs, liver and kidneys.

“By the time I got caught, I felt like a (handicapped person),” the drug court client said. “I honestly felt like I couldn’t think. I couldn’t remember anything. I couldn’t talk. My hands were starting to curl up. I was tense. The effects that it does to you are extreme.”

She has been sober 90 days today. The sole lingering side effect: migraines.

Awareness and education are the ways to diminish huffing, especially in younger generations, authorities say.

“In my experience, the way you combat it is to talk to your kids about the dangers,” Weiss said. “When you sit them down and talk to them about sex, drugs and rock and roll, talk about huffing. And not as a drug, but as a poison. Because that’s what it is — a poison.”

Walsh urged parents to not only talk with their children, but also to be aware of telltale signs.

“I mean, there is nobody in the world who needs to go through 18 cans of Dust-Off in one day to clean the house,” he said.

Police investigate the scene of an accident at the intersection of 13th and Wyoming Boulevard near Mills, Wyo., on Nov. 14. The passenger in the truck died from his injuries shortly after being transported to Wyoming Medical Center. The driver is accused of huffing prior to the crash.

Inhaling chemicals in household products with the intention of getting high — called huffing — is one of the most common forms of drug use, according to the National Inhalant Prevention Coalition.