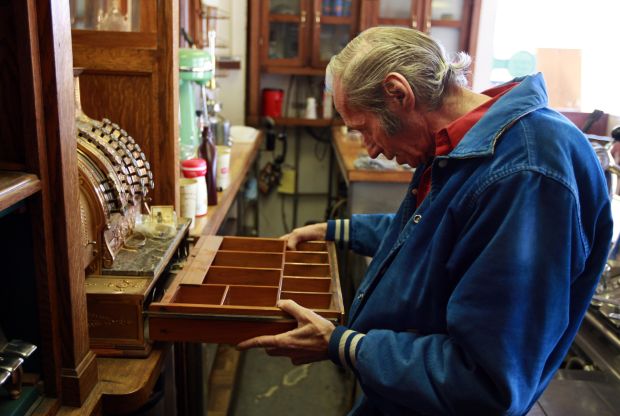 Neil Rogers, owner of the Rialto Cigar Store in downtown Casper, Wyo., replaces the cash drawer of his National Cash Register on Wednesday. The mechanical cash register was originally purchased in 1917 and Rogers acquired it about ten years ago. 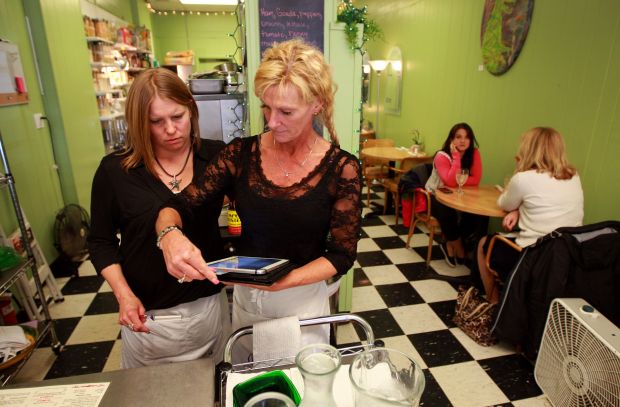 Tracy Hinds, left, and Sheila Foley swipe a customer’s credit card on a tablet computer Wednesday at Jacquie’s Bistro in Casper, Wyo. Bistro servers use the tablet to process all card payments and to record cash transactions. The system is paperless, and allows customers to receive their receipt in the form of an email or text message.

Neil Rogers, owner of the Rialto Cigar Store in downtown Casper, Wyo., replaces the cash drawer of his National Cash Register on Wednesday. The mechanical cash register was originally purchased in 1917 and Rogers acquired it about ten years ago.

Tracy Hinds, left, and Sheila Foley swipe a customer’s credit card on a tablet computer Wednesday at Jacquie’s Bistro in Casper, Wyo. Bistro servers use the tablet to process all card payments and to record cash transactions. The system is paperless, and allows customers to receive their receipt in the form of an email or text message.

Known as a terminal in the service industry, the machine’s back is against the wall. It’s almost as if it knows its time is running out.

Employees at the bistro don’t tally totals or print receipts on the machine.

“We only use it to hold cash,” said Jacquie Anderson, the bistro’s owner and chef.

As the neglected terminal sat alone, Roger Hillibush finished his lunch and asked his waitress for his check. She showed him the ticket. Hillibush passed her his credit card.

When the waitress scooted behind the counter to total his check, she walked past the monolithic mound of plastic as if it didn’t even exist. Instead, she picked up a touch-screen tablet.

She glided Hillibush’s card through an insert that plugs into the bottom of the handheld device and returned to her customer’s table.

Hillibush didn’t receive a paper receipt when she returned his card. Instead, she flashed the tablet in front of his eyes. She wasn’t offering a peek at a movie or a glance of an article. She was asking him to sign his bill and leave a tip.

Hillibush hit the screen to choose what he would tip and then used his finger to sign his name.

As for the receipt, he received it via email.

Despite the craze over the new technology, cash register relics can still be found in Casper. A few doors down from Jacquie’s Bistro is the Rialto Cigar Store. Anyone who goes inside for a malt or a pack of smokes can find a solid brass register with flowery ornamentation decorating the side of the machine. It was made in 1913 and its ring sounds like something from an era long gone. If Butch Cassidy would have seen the machine, his eyes would have twinkled with dollar signs.

But he wouldn’t have been able to lift it out of the store.

“It takes two men and an itty-bitty boy to move it,” said Neil Rogers, owner of the cigar store. “But it works perfectly.”

It functions via levers and springs. To open the drawer he has to turn a crankshaft on the side of the hulking, antiquated machine.

“When the power goes out,” he said, “I am still in business.”

In a low-tech state like Wyoming, innovations in the retail sector are slow to appear on the radar. But the increasing presence of tablets and smartphones in the hands of consumers has expanded the technology’s use beyond Netflix and email. In Wyoming, there is a growing number of tablets and smartphones functioning as registers, which are referred to in the industry as point-of-sale systems. The tidal shift signals that more and more businesses are likely to send their terminals by the wayside and let handheld devices serve as new conduits for cash collection.

Businesses like the 5150 Rock Gym along with local hairstylist Danae Counts use the technology. But no sector of the Casper business community is showing a greater use of tablets than the food industry.

Along with Jacquie’s Bistro, Great Harvest Bread, Stuft Gourmet Baked Potatoes and the Trailhead Lodge make up a contingency of businesses using the machines for food service. In Lander, Old Town Coffee uses a tablet. In Cheyenne, Freedom’s Edge Brewing Company does the same.

To facilitate the transactions at her bistro, Anderson bought a card reader and then downloaded an app.

She paid about $300 for the tablet and $150 for the app. For every swipe, the app’s manufacturer charges her 2.75 percent. Credit card companies, Anderson said, can charge more than double that amount.

After the breakfast and lunch rushes on Wednesday, the company only charged Anderson 86 cents for its services. That’s a small price to pay for what the service offers, she said.

The software tracks her daily earnings down to the minute. It tracks her gross and net sales while accounting for tax. It’s an accountant’s dream, she said.

“My accountant actually recommended it to me,” she said.

At Great Harvest Bread, owner Tony Scott tracks how many brownies, pastries, coffees and loaves of bread he sells each day.

At 1 p.m. on Wednesday he sold 24 scones and seven cookies.

“This way I know what to bake for the next day,” he said.

When he was out of town last week, he was able to watch the store’s sales minute by minute.

His only complaint with the software is that it can’t split a payment automatically. If someone wants to pay using the $3 remaining on a gift card and orders $4 worth of food, he needs to make a custom transaction, which doesn’t allow him to track the products in the sale.

Square, PayPal, ShopKeep and Intuit are some of the companies cashing in on both the ubiquity of touch-screen technology and credit card use at stores.

The biggest loser in the mix may be banks because proprietors can sidestep them for a new, cheaper middle man.

Theresa Combs is the owner of Stuft Gourmet Baked Potatoes. Her restaurant was the first in town to use the technology. A bank was going to charge her more than 4 percent for every transaction, she said.

Then her children told her about an app.

“It’s easy and cheaper,” she said.