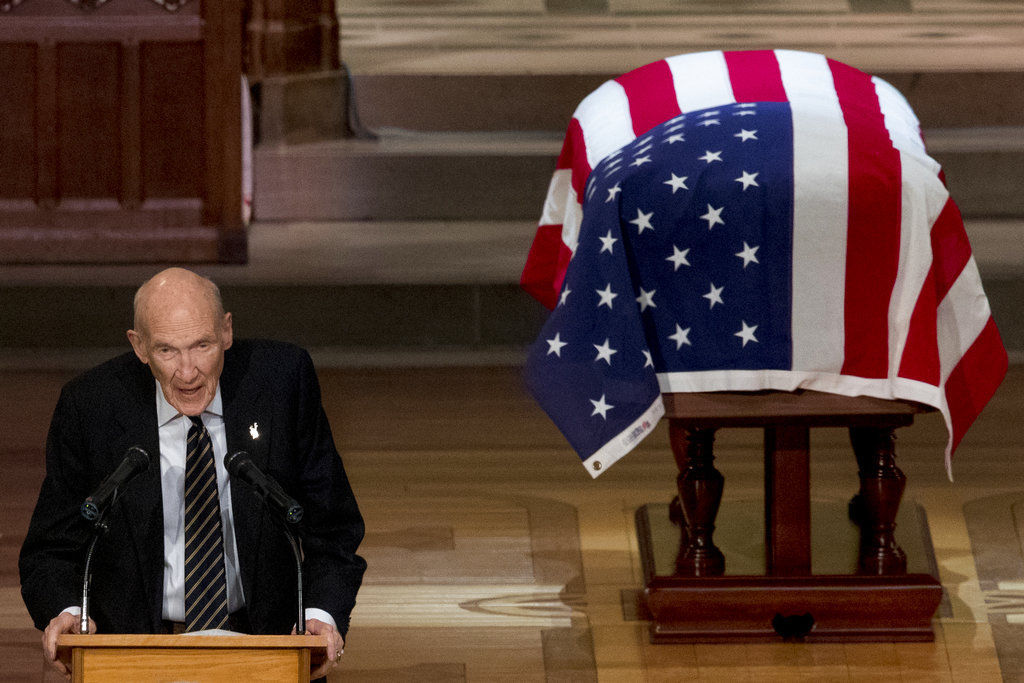 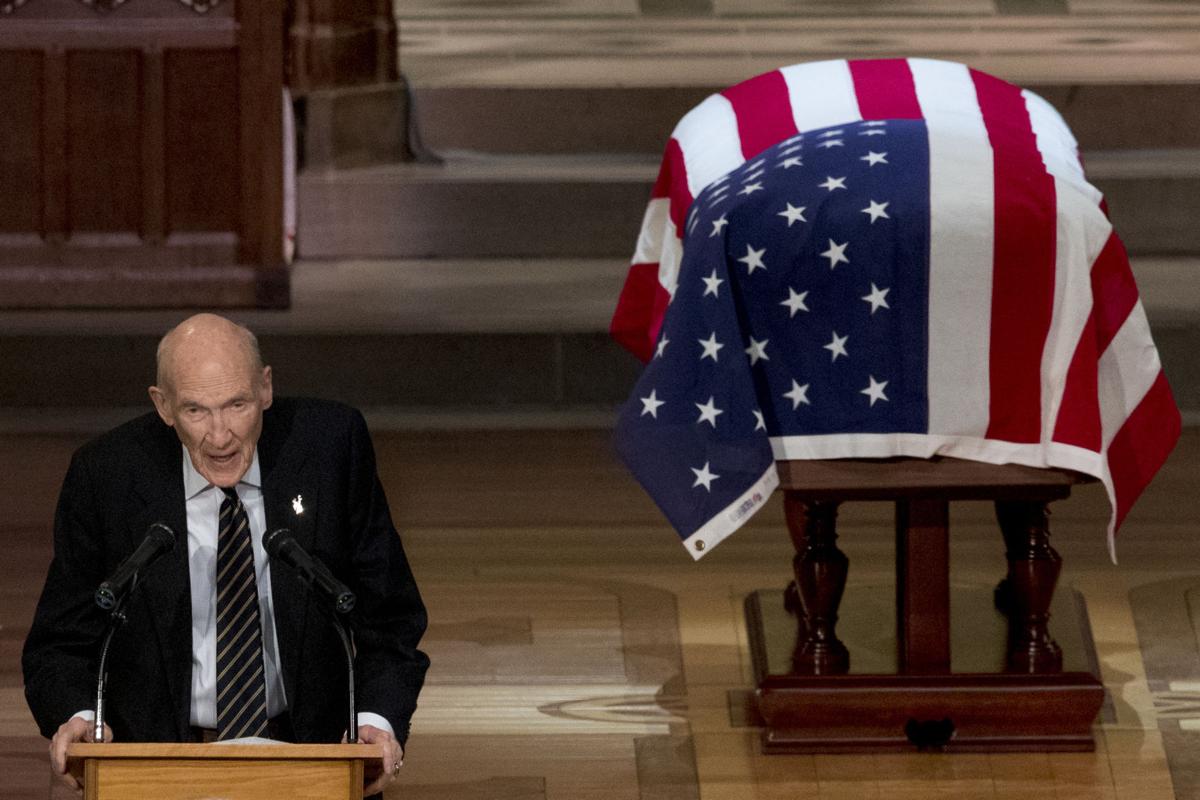 In a eulogy to the nation’s 41st president last week, former Wyoming Sen. Alan Simpson remembered that while George H.W. Bush loved a good joke, his biggest flaw was that he “could never remember a punchline.”

Fortunately, Simpson — for much of his time in government, as well as in the National Cathedral on Wednesday — had a few of his own up his sleeve, delivering them in a heartfelt remembrance of one of America’s more quietly consequential leaders of the 20th century.

Simpson’s eulogy tracked the course of a friendship that lasted more than half their lives, from their chance meeting in a congressional office building in 1962 to their time in government. Running roughly 11 minutes, Simpson’s speech was peppered with moments of brevity and gravity, rich in fondly recollected anecdotes and rare insights into the personality of a man few Americans knew once the notepads and television cameras were tucked away.

He remembered both the mischievous times and the candid carousing back to the White House while singing the theme to “Evita” and other Andrew Lloyd Weber classics — something that inspired Bush to break into song at a presser that, Simpson joked, may have made them think he was “losing his marbles.”

Simpson shared the story not just of the difficult times in Bush’s tenure (including the decisions that led to Bush becoming a one-term president), but of the tumultuous times in his own career, going from the toast of Washington to the “Z” list in short order, only to be awakened early one morning by a ringing phone with Bush’s voice — and blaring country music twanging in the background — on the other end of the line.

“And he said, ‘Aha! I see the media is shooting you pretty full of holes!’” Simpson recalled the president saying, before Bush invited the troubled senator for a fishing trip to Camp David. “At the time, his approval rating was 93 percent. Mine was more like .93 percent.”

“And so we went, media of course, all gathered as we headed toward Marine One,” he continued. “And George said, ‘Why don’t you wave to your pals in the media, Al?’”

“And they didn’t wave back,” he deadpanned.

As it turned out, Simpson said, Bush was told by staff members not to associate with Simpson, who was undergoing widespread criticism in the press at the time. More important to Bush, however, was friendship and loyalty.

“In the theme of George Bush’s life — during all the highs and lows — there was a simple credo: what would we do without family and friends?” said Simpson.

“So the punchline for George Bush is this,” Simpson said. “You would have wanted him on your side. He never lost his sense of humor. Humor is a universal solvent against the abrasiveness of life. He never hated anyone — he knew what his mother and my mother always knew: hatred corrodes the container it’s carried in. The most decent honorable person I’ve ever met was my friend George Bush. His epitaph? Probably just a single letter: the letter ‘L,’ for loyalty. It coursed through his blood.”

You can watch the whole eulogy here.

George Bush made multiple visits to Wyoming during his tenure as president and vice president, including a trip to Yellowstone National Park a…

The Washington Post delivers live video coverage as the nation's capital bids its final farewell to the late former President George H.W. Bush on Wednesday in a service of prayer and praise that is drawing together world envoys, Americans of high office and a guy from Maine who used to fix things in Bush's house on the water. 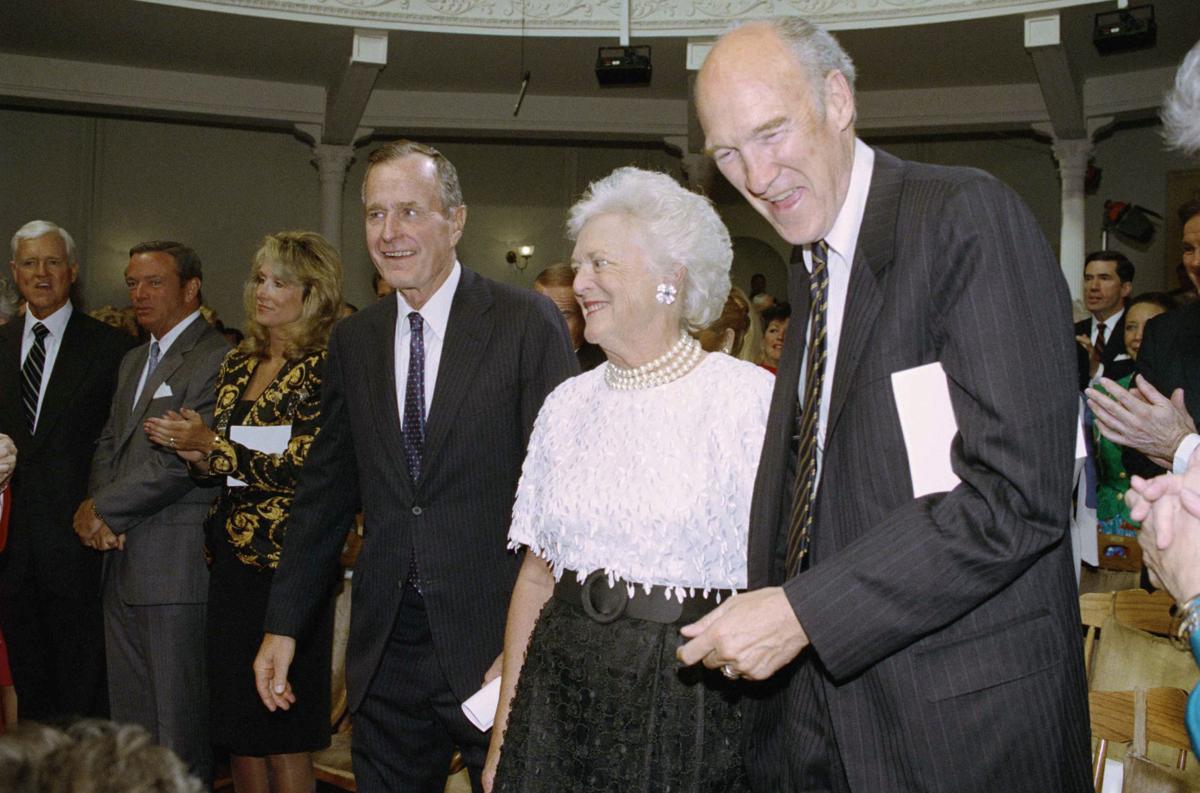 U.S. President George Bush and his wife, Barbara, share a laugh with Sen. Alan Simpson, R-Wyo., on June 14, 1992 in Washington prior to the start of "A Festival at Ford's," the annual gala benefit by the theater.