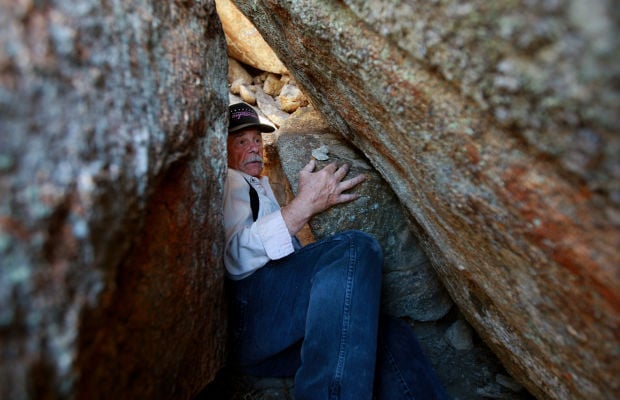 George Gill, a forensic anthropologist and University of Wyoming professor emeritus, crawls into a small cave while searching for the origin of the Pedro Mountain Mummy on Sept. 6 on Heaths Peak in Carbon County. A group of amateur historians found the spot in 2009 and believed it could be the cave where Cecil Main and Frank Carr discovered the Pedro Mountain Mummy while prospecting for gold in the early 1930s. However, there is no known record that indicates if the Little Man Mine claim, which surrounds the cave, is in fact the mummy discovery site. 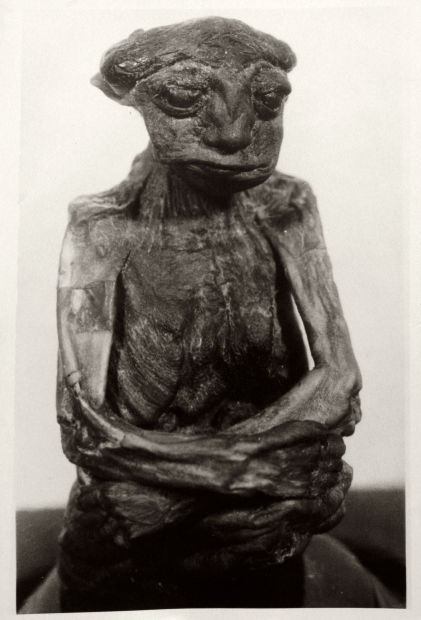 The Pedro Mountain Mummy was discovered in the early 1930s by Cecil Main and Frank Carr, two prospectors looking for gold in the Pedro Mountains south of Casper. Now known to be an infant born with the birth defect anencephaly, Pedro was touted as a pygmy and displayed around the state as a curiosity. The mummy vanished in 1950.

CASPER, Wyo. — We zigzagged across the sage and stone, following a line visible only on a map — 7,700 feet above sea level.

Look up, covering eyes against the midday sun. Does that rock look right? Look down. A careful step on sagebrush-shaded rock. Fish the small GPS out of a pocket. The satellites say we’re close.

The heart of the mummy cave.

In the early 1930s, a pair of gold prospectors blew open the cave and found a leathery mummy, half a foot tall. Over the next two decades, the mummy changed hands. Scientists and sideshow visitors gawked at it. The celebrated Pedro Mountain Mummy.

The facts were always swamped by rumors: It was an old man. A lost species. A troublesome “little person” of Native American lore. It would disprove evolution. It had pointy teeth.

George Gill has heard all the stories. The Pedro Mountain Mummy and other tiny Wyoming mummies have fascinated the noted forensic anthropologist from the University of Wyoming since he first heard about them decades ago.

Actual research on the mummy checked out. It was an infant, born with anencephaly, a severe birth defect. Age unknown. It wasn’t a lost species or an old man.

But the cave is still here, somewhere in central Wyoming, in the Pedro Mountains, on the south side of Heaths Peak. The steep slope is covered with rocks like popcorn spilled on a blanket.

Today, Gill is going to find it, aided by directions from Mike Metcalf, a Wyoming geologist who formed the organization WYBREX to explore historical sites in the state. He and a few others hiked to the site in 2009 and printed a booklet detailing the cave.

Satellite navigation isn’t very useful to find a nearby thing. Better clues: a particular set of rocks sheltering the cave, split by dynamite, accented by a large dead tree and a small live pine.

Not right, that one. Maybe over here. One of us splits away to scramble up the heights, moving away from the invisible line.

Ask anyone: Mummy caves are awesome.

Howard Carter’s opening of King Tut’s tomb in the early 1920s was an international sensation. It launched the mummy into the popular imagination, populating Hollywood movies with curses and torch-lit chases.

Even removed from their burial spots, shoved from reality into myth, mummies live.

The better the dead are preserved, whether by nature or man, the more we’re compelled to stare. We peer into their faces like a mirror, and wonder.

We marvel at still-braided hair, skin dried to jerky, carefully woven clothes and injuries thousands of years old. What was he like? Who did she love? What do they know that I don’t?

A popular exhibit in the Egyptian Museum in Cairo is the royal mummy room, where kings of yore are laid out for public inspection under subdued lights and heavy guard.

Thousands every year trek into the empty burial chamber at the heart of Giza’s Great Pyramid, one of the seven ancient wonders of the world. The rock room is haphazardly lit by floodlight. Visitors fill the sacred room with the stench of urine and sweat.

We, the living, are suckers for the dead.

The inside of the Pedro Mountain Mummy cave smells like dust, a waft of sage from brushes outside bruised under boot heel. Its opening is partially covered by a sheared-away rock pulled down to the ground by gravity. The uneven cave floor is gritty with gray-brown dust.

“I should’ve brought a shovel, or a trowel or something,” Gill says.

It’s hard to even call this a cave. It’s a poor shelter where three large rocks rest upon each other, with space opened to the sky. A spotted rock ledge a few feet into the cave looks like a promising location to place a mummy, but the rock above it angles too sharply over the flat space.

The back of the cave angles away, a smaller rock ledge at the base, and ends hard at a jumble of rocks. We eye the ledge. It could hold a tiny mummy seated on its haunches.

Gill wriggles inside, using his own body to measure the cave. It’s about 10 feet deep, 4 feet wide at its widest, and a couple of feet high. That’s a generous measure.

We munch snacks and swig water. Gill talks about the Pedro Mountain Mummy and about another, similar mummy possibly found in the vicinity. Both were left forever with their arms and legs carefully wrapped around them.

“They weren’t treated as deformed infants,” he says. “They were put in very special places.”

They were treated as if they were sacred. But the cave we just crawled into doesn’t feel like it was sacred to anyone.

What did we expect? What if this was it, a small cave, split open by prospectors’ dynamite and left exposed to the elements for 80 years? It seemed plausible.

The slope drops down to a broad basin cut by the North Platte River wending its way north to Pathfinder Reservoir. It’s a kingly view — from a place you don’t end up unless you really want to be there.

So we took a mummy cave selfie.

Back down below the peak, we review what we know, what we’ve seen. If the stories about the cave are to be believed, we’ve failed to find it.

All the stories of the mummy’s discovery are united on just a few basic points. Gold prospectors Cecil Main and Frank Carr found the mummy while looking for gold. Their use of dynamite led to the cave. They found the mummy on a ledge in the cave.

That mention of a ledge, at least, seems sound based on an archived affidavit dated 1936 and signed by Cecil Main. The mummy was “found in a sealed cave, on a rock ledge about two and one half feet from the ground … there was nothing else in the cave.”

After that, unverified details abound, although everyone seems to know the cave’s dimensions.

The two were working a “rich vein” of gold, said Kathy Weiser on the website legendsofamerica.com. “The small cavern was about 15 feet long and 4 feet high and had been totally sealed off from the outside world by a thick wall of rock.”

“When the dust settled, they saw they had opened up a small room, approximately 4 ft tall, 4 ft wide, and about 15 ft deep,” said the Wikipedia page about the mummy.

None of these descriptions match the site at Heaths Peak. But then, none of the describers have likely been on Heaths Peak.

Yet there are still good reasons to believe we found the mine.

It’s not clear if Main and Carr staked out a mining claim at the site, but there is one that surrounds the mummy cave, stretching up and down the slope for about 200 feet.

Its name: the Little Man Mine.

Two geologists assessed Heaths Peak in 1970. Their report found signs of a uranium-rich mineral known as uraninite at the site. The Little Man Mine site was “rumored” to be a gold claim, they wrote, so they checked the rocks for gold.

The conclusion: One hundredth of an ounce of gold and silver per ton of rock at the site. Main and Carr were never going to strike it rich at the Little Man Mine site.

The only gold at the site was pyrite.

Gallery: Searching for Little Man Mine

George Gill, a forensic anthropologist and University of Wyoming professor emeritus, crawls into a small cave while searching for the origin of the Pedro Mountain Mummy on Sept. 6 on Heaths Peak in Carbon County. A group of amateur historians found the spot in 2009 and believed it could be the cave where Cecil Main and Frank Carr discovered the Pedro Mountain Mummy while prospecting for gold in the early 1930s. However, there is no known record that indicates if the Little Man Mine claim, which surrounds the cave, is in fact the mummy discovery site.

The Pedro Mountain Mummy was discovered in the early 1930s by Cecil Main and Frank Carr, two prospectors looking for gold in the Pedro Mountains south of Casper. Now known to be an infant born with the birth defect anencephaly, Pedro was touted as a pygmy and displayed around the state as a curiosity. The mummy vanished in 1950.