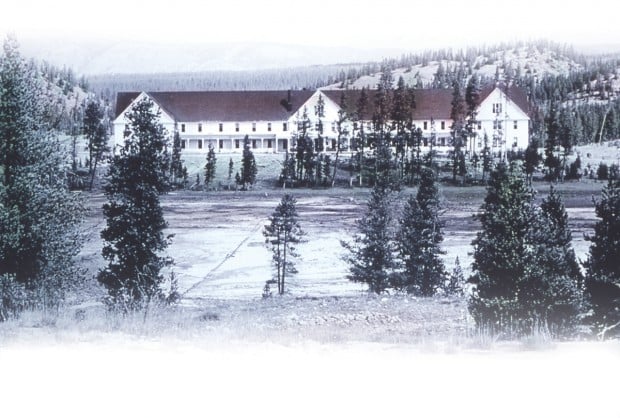 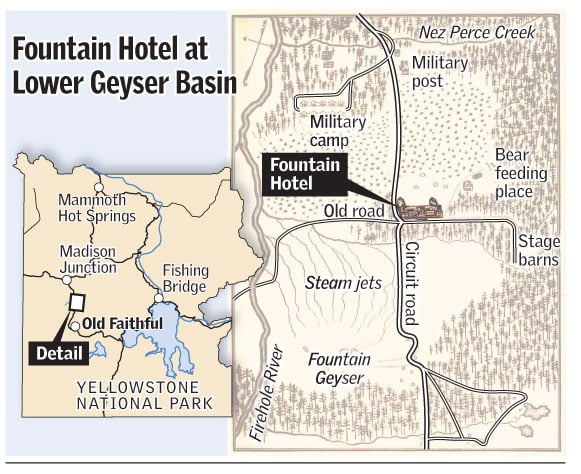 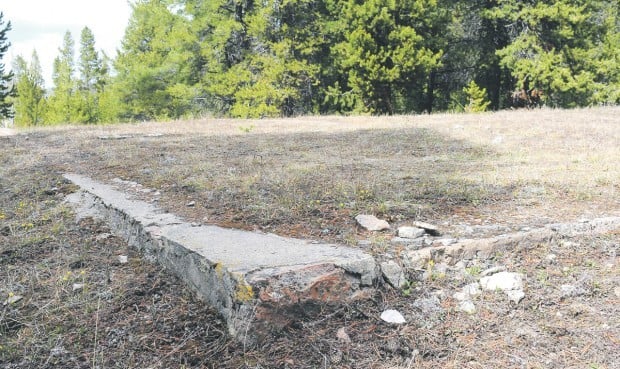 Pieces of the foundation are all that’s left of the Fountain Hotel.

The slight rise to the right of the Grand Loop Road once supported the expansive Fountain Hotel. The facility, opened to the public in 1891, was razed in 1927. 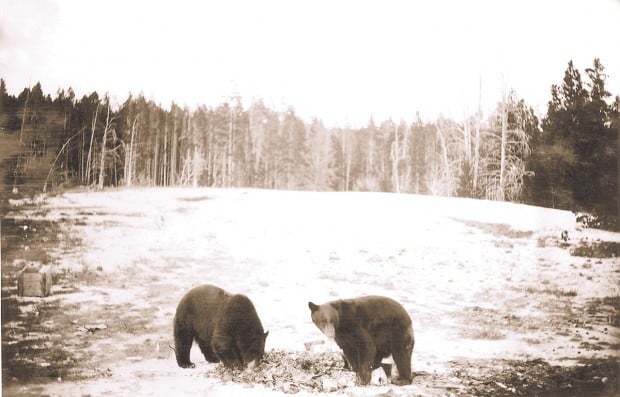 Bears forage in the vicinity of the garbage dump near Fountain Hotel in August 1897. The hotel was one of the first places in Yellowstone National Park where tourists could reliably see bears. (Courtesy photo)
{{featured_button_text}}
1 of 5

Pieces of the foundation are all that’s left of the Fountain Hotel.

The slight rise to the right of the Grand Loop Road once supported the expansive Fountain Hotel. The facility, opened to the public in 1891, was razed in 1927.

Bears forage in the vicinity of the garbage dump near Fountain Hotel in August 1897. The hotel was one of the first places in Yellowstone National Park where tourists could reliably see bears. (Courtesy photo)

YELLOWSTONE NATIONAL PARK — After visiting Yellowstone National Park in 1888, traveler Patty Selmes returned in 1891 to find the newly constructed Fountain Hotel one of the “great improvements since my former trip.” She called the structure “a most imposing lodge for so vast a wilderness,” according to a history of the hotel compiled by park historian Lee Whittlesey.

“It was a very romantic place,” he said of the hotel, once located on the east side of Fountain Flats.

Little remains of this once grand structure, a stopover for travelers visiting Old Faithful geyser, paint pots and fumaroles in the Upper and Lower geyser basins. Visitors would typically spend two nights in order to travel to Old Faithful and back before proceeding on to Yellowstone Lake.

Travelers on the Grand Loop Road today are unlikely to know the two-story F-shaped structure even existed on the small rise north of Fountain Paint Pots. Only vague outlines of cement foundations, some bricks, broken glass and rusty nails remain scattered across the hillside. Some of the small trees that have grown up where the hotel once stood are scarred by bull elk as they rubbed the velvet off their antlers. Bison scat is evidence of the current residents at the hotel site. Below what would have been the entrance, frogs sing in a throaty pond chorus. Would visitors more than 100 years ago have been serenaded by the same sounds?

On her previous visit, Selmes may have stayed at the nearby Firehole Hotel near the juncture of Nez Perce Creek and the Firehole River. The park’s first public lodging facility, it was built in 1880 and was closed when the Fountain Hotel was built.

The contrast between the two facilities was great.

In his 1886-87 official reports, Capt. Moses Harris, military superintendent of Yellowstone, said the 37-room Firehole Hotel was of “rude construction” and “needlessly ugly in architectural design.” One traveler even wrote a letter to the secretary of the Interior complaining about the cramped and inadequate lodging.

In comparison, the Fountain Hotel had 133 rentable rooms with 141 beds, steam heat, electric lights and hot water piped in from nearby hot springs for bathing. The hotel also contained a wine room, bar, dining room, kitchen and pantry.

It was undoubtedly a welcome respite for weary stagecoach travelers touring the park.

At the time, Nash would have been comparing the Fountain Hotel to the similarly designed Lake Hotel, which had also just opened to the public. Earlier lodging facilities included the Canyon Hotel, opened in 1890, and the National Hotel at Mammoth, completed in 1886.

The Fountain and Lake hotels were built by the Yellowstone Park Association. Owned by Northern Pacific Railroad, the association had a vested interest in increasing visitation to the park.

Construction began in the fall of 1890 and the $100,000 facility was opened in June 1891. Its longest side and front porch faced south toward Fountain Geyser, the hotel’s namesake. Eventually, it was painted yellow on the outside and mud from nearby paint pots was used to color inside walls a pinkish hue.

Whittlesey writes that between 1881 and 1898, Fountain Geyser regularly erupted every two to eight hours, shooting water 60 feet into the air for 15 minutes to an hour. In comparison, Old Faithful erupts roughly every 92 minutes for one and a half to five minutes and can shoot more than 180 feet high.

Edmund Erk said of his 1904 stay, “Music, song and laughter was general and ever present, and all shared therein, in full accord.”

The hotel was closed after the summer of 1916. In 1927, the empty structure was torn down and much of it burned.

“They must have been uncertain about tearing it down, because it stood there for 10 years after abandonment,” Whittlesey said.

The Fountain Hotel was doomed by location and mobility. Guests wanted to stay at Old Faithful, rather than make the eight-mile day trip from Fountain Hotel. Initially, tent camps were set up to accommodate guests at the famed geyser as well as a building called the “Shack Hotel.” In order to cater to a more particular clientele, the Old Faithful Inn was opened to the public in 1904, providing upscale lodging next to the namesake geyser.

The Fountain Hotel’s demise was also hastened by the admittance of automobiles into the park in 1915. Capable of traveling farther in one day than stagecoaches, and also allowing people more freedom to camp on their own, autos took visitors away from the Fountain Hotel.

Although the Fountain Hotel is gone, its legacy is carried on in other ways. The hotel’s garbage dump was the first place in the park that visitors could regularly count on seeing bears come to feed. A photograph of one of the bears was eventually incorporated into the Yellowstone Park Association and the Yellowstone Park Transportation logo. The bear, looking out quizzically, was framed inside red, white and blue circles.

The hotel was also one of the first in the park to maintain a large herd of cattle, maintained to feed guests. One theory has it that these cows may have introduced brucellosis, a disease that can cause pregnant cattle to abort, to the park and its bison.

To imagine what the hotel looked like, tourists can visit Yellowstone’s Lake Hotel. The same set of plans was used to construct both facilities, Whittlesey said. In 1903, though, architect Robert Reamer, who designed the Old Faithful Inn, modified the Lake Hotel by adding the Colonial-style columns in front, extending the roof in three places and adding false balconies. In 1929, other changes were made to the dining room, portico, sunroom and a refurbishing of the interior to create the Lake Hotel that welcomes visitors today.