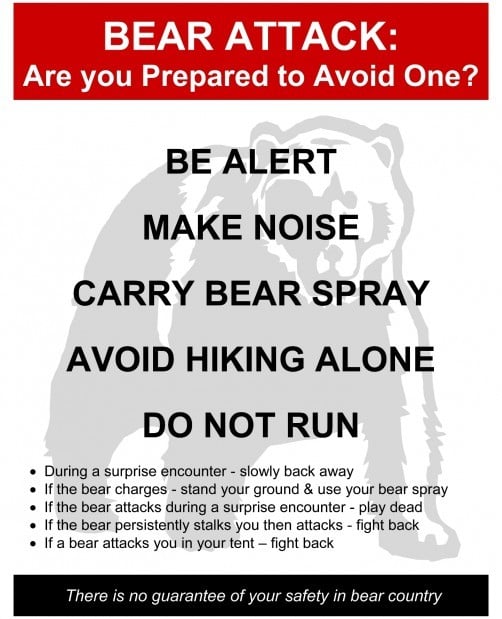 This is the new grizzly bear warning sign for Yellowstone National Park. 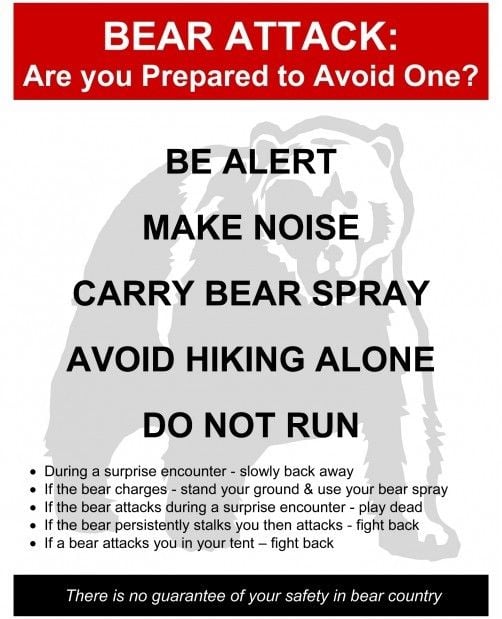 Hunters should follow a few tips when in bear country.

JACKSON, Wyo. — People who venture onto the trails in Yellowstone National Park this summer will see new signs warning them about avoiding bears and what to do if they should encounter one.

Last summer two people were killed in the park in separate bear encounters. Neither hiker carried bear spray. One ran when attacked and one was hiking alone. The park recommends hiking in groups, carrying bear spray and not running if you surprise a bear, said Kerry Gunther, a Yellowstone bear management biologist.

Park surveys found only 16 percent of day hikers carried bear spray while up to 70 percent of backpackers did so, Gunther said.

Backpackers must get a backcountry permit, during which time they receive additional bear safety information from rangers. They also must watch a video, which includes information on bears in the park and bear spray, he said.

The old bear signs had been in use since the 1980s. They provided a block of text warning people about how to behave in bear country and in different kinds of encounters. The signs were intended to be concise, complete and attention-grabbing, Gunther said.

The new signs are simplified, with a large "Bear Attack" at the top to catch hikers' attention. They provide basic safety suggestions: Be Alert. Make Noise. Carry bear spray. Avoid hiking alone. Do not run.

The concept might be simple, but a lot of work went into creating the design, said Greg Losinski with the Idaho Game and Fish Department, who was part of an information and education working group that helped create the signs.

The signs needed to be direct, he said. The old signs were not garnering the appropriate reaction from people, he said.

"People are becoming blasé and not taking it seriously," he said.

The signs will hang about 50 to 100 yards down the trail, instead of at the trail head where people often don't stop, Gunther said.

The design is the result of a collaboration between staff members from different agencies. Sign production was funded by a grant of a little less than $3,000 from the Interagency Grizzly Bear Committee, Gunther said.

The signs will be available to all agencies in the greater Yellowstone ecosystem, although some might need to make modifications because of land use, he said. For instance, areas on national forests may have people who bike or bring their pets, he said. Hopefully, he said, all the agencies will keep the basic look of the sign to help standardize the message.

JACKSON, Wyo. — Grizzly bears could again be recommended for removal from the endangered-species list — in approximately two years — after fed…

Gazette opinion: Enjoy the high country, but be 'bear aware'

As the days grow longer, the temperatures rise and the snow in the high country melts, filling mountain streams and rivers with cold runoff, o…

Hunters warned to watch for grizzlies near Red Lodge

Montana wildlife officials are warning hunters and others to watch out for grizzly bears along the Beartooth Front west of Red Lodge.

POWELL -- A lawsuit over a fatal bear mauling near Yellowstone National Park is set to go to trial at the end of the year.

Grizzly bears in and around Yellowstone National Park will keep their threatened status for at least the next two to three years, as wildlife …

This is the new grizzly bear warning sign for Yellowstone National Park.

Hunters should follow a few tips when in bear country.