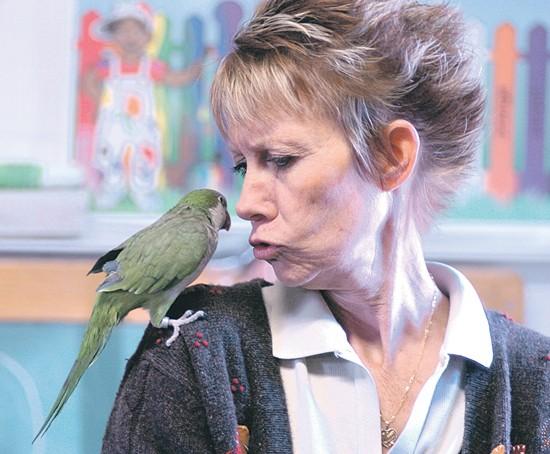 Debbie Dawe shows off Sweet Pete, a pet she has had since June. Pete is a Quaker parakeet, an invasive species banned in Wyoming under state Game and Fish Department regulations. He must be sold or given to new owners in another state. 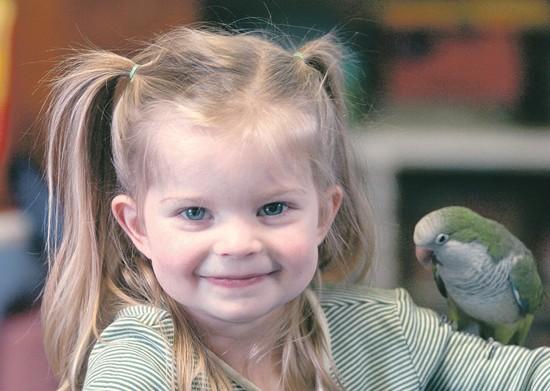 Day care student Mahayla Allred, 3, lets Sweet Pete perch on her arm Tuesday. Pete is a Quaker parakeet, an invasive species banned in Wyoming under state Game and Fish Department regulations, and must be sold or given to new owners in another state.
RUFFIN PREVOST Of The Gazette Staff

CODY - Pete is a good boy, and he is usually the first to tell anyone that.

In fact, he was loudly proclaiming his goodness when the authorities carted him off to face an uncertain future, possibly even an untimely death at the hands of the law.

"The whole time they were confiscating him, he was saying, 'I'm a good boy. I'm a good boy,' " said Debbie Dawe, owner of Sweet Pete, a Quaker parakeet she has had since June.

Also called Monk parakeets, Myiopsitta monachus are considered an invasive species and a potential agricultural pest in Wyoming, where they are banned under state Game and Fish Commission regulations.

So when Dawe placed an ad in the newspaper to sell the bird, she got a call from the Game and Fish Department that led to its seizure. The experience left her mad as a wet hen, but it looks like things will end in a pardon for Pete.

Deputy Park County Attorney Sam Krone said he worked hard in the days leading up to Thanksgiving to come up with a resolution, but acknowledged that his decision is likely to leave a few ruffled feathers.

Pete has been returned to Dawe and her husband, Tim, who together run an in-home day care where the bird often chatted with the young kids.

They could have received a $750 fine and Pete could have been destroyed. But the Dawes each got a warning for violating Game and Fish regulations, and have until Sunday to find Pete a new home - probably in Montana, where Quakers are allowed.

Dawe said she bought Pete for $500 from a seller in Montana, and because she runs a day care, she spent extra time and money to make sure he had a clean bill of health.

Like most Quakers, which are prized for their extensive vocabulary and quick adoption of human catch phrases, Pete talked a lot. But he also squawked too loudly for Dawe's newborn granddaughter and the sleeping infants at the day care.

Dawe said she had no idea the bird was contraband in Wyoming, listing it as a Quaker in her classified ad, which wildlife investigator Kathy Crofts said she learned of through an anonymous tip.

But Crofts did not identify herself at first as a Game and Fish employee when she called to ask about the bird, Dawe said, catching her off-guard and launching a wild goose chase for Pete.

"That's when you get a big knot in your stomach and wonder, 'What am I supposed to do?'" she said. So she told Crofts to come by around 9:30 on a Friday morning earlier this month to pick up the bird.

But after hanging up and considering her options, Dawe realized that Pete might be killed and she would not be able to sell him. She sought some quick legal advice and decided to exercise her Fourth Amendment protection from unreasonable search and seizure.

When Crofts showed up, Dawe declined to let her in. That's when Crofts decided to get a search warrant.

"I met with her at 9:30. She gave me an indication that she would be obstructing justice," said Crofts, who would not elaborate on what that indication was.

"It is in my experience with people who have illegally possessed pets that they will attempt to hide those pets and involve other innocent people in concealing and obstructing justice," she said.

It only got worse from there, and the two women offer sharply differing accounts of the details of the search for Pete and his eventual seizure later that day.

Dawe said that Crofts - worried that Pete might fly the coop - told her to arrange for the day care kids to be picked up in preparation for a four-hour search that would involve tearing the house apart.

The warrant was approved by a county attorney and a judge.

"I'm not a person who goes out looking for a fight," Dawe said, adding that she was trying to sell the bird, and would have been more cooperative if Crofts had been less aggressive and more interested in conflict resolution.

"I've got enough problems that I don't need Fish and Game barking down my neck for our classroom pet," she said.

"The Dawes had several opportunities to talk to me, and they refused to cooperate," Crofts said.

Dawe said she was upset when Crofts brought an armed, uniformed Cody police officer to help serve the warrant and witness the search.

Though the officer was courteous and tried not to spook the kids, calling a cop to help nab a parakeet at a day care was unnecessary, Dawe said.

Crofts said she routinely requests assistance from local law enforcement agencies, both to help with additional manpower and to add another officer's perspective and expertise to any search.

"There was no event whatsoever during our contact with the Dawes that would indicate that any child was upset or otherwise disturbed from their daily routine," Crofts said.

Day care client Buffy Allred said she contacted a Game and Fish supervisor about the search.

Allred said Mahayla, her 3-year-old daughter, was "very concerned" after the incident, and dreamed that night that police came to take her away, also worrying that they would take her dog, Yoda.

"They could have done it in a completely different manner," Allred said.

After his arrest, Pete was placed under the wing of a willing local bird expert.

"I was the warden for about a week and half," said Cody resident Susan Ahalt, owner of the nonprofit Ironside Bird Rescue.

Ahalt said she owned six parakeets, but had never before seen a Quaker.

"They are a cute little bird. They're very clever. They're independent, like border collies. They need something to do," she said.

"There might be other people in this state that have them without knowing it's against the law," she said.

Ahalt said she spoke with a bird expert from Florida who told her that Quakers have become a serious nuisance in parts of the state, where there are tens of thousands of the feral birds.

Though Quakers are banned in eight states, according to enthusiast Web sites, it's legal to own them in Montana, Idaho, South Dakota and Colorado.

"They have established feral populations in some states … but it's questionable whether they could live in Montana," said Tim Feldner, commercial wildlife permitting manager for that state's Department of Fish, Wildlife and Parks.

Feldner said Montana revised its laws on exotic species in 2004, and wildlife officials considered banning the Quaker parakeet then, but met opposition from a few groups of bird lovers.

"We have since prohibited venomous snakes, primates, things like that which are, from an agricultural standpoint, native species or human health and safety view, more critical in our eyes," he said.

Some experts warn that the Quaker, which eats seeds, breeds prodigiously and is highly adaptive to foreign climates and habitats, has the potential to be an agricultural pest that could rival crows or starlings.

In urban settings, where it builds large twig nests on buildings, antennas and power poles, it can be a nuisance. And in rural areas, the birds can form large colonies that force out native species, Crofts said.

But the Internet is full of Quaker fans who say that apocalyptic warnings began with the bird's arrival from South America in the 1960s, and have proven unfounded.

"For my purposes, the bird does not belong in the state of Wyoming. We don't want it here. It's against the law. My only goal in this case was to have the parakeet out of the state and to protect our native birds," Crofts said, adding, "It is a passionate issue."

Debbie Dawe shows off Sweet Pete, a pet she has had since June. Pete is a Quaker parakeet, an invasive species banned in Wyoming under state Game and Fish Department regulations. He must be sold or given to new owners in another state.

Day care student Mahayla Allred, 3, lets Sweet Pete perch on her arm Tuesday. Pete is a Quaker parakeet, an invasive species banned in Wyoming under state Game and Fish Department regulations, and must be sold or given to new owners in another state.
© Copyright 2021 Billings Gazette, 401 N Broadway Billings, MT | Terms of Use | Privacy Policy
Powered by BLOX Content Management System from TownNews.com.
You don't have any notifications.