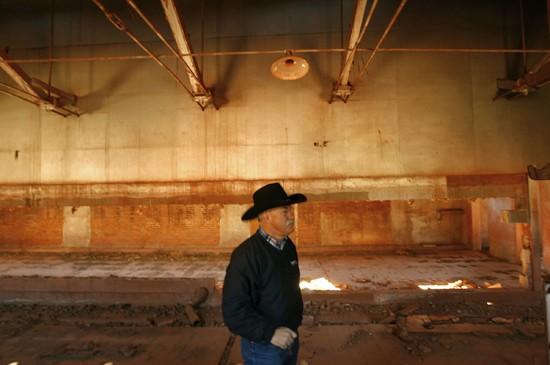 Selling agent Curtis James stands Jan. 21 in what used to be the large shower room where miners would wash themselves of the thick red dirt after working deep in the mines in Sunrise, Wyo. The abandoned iron ore mining town has been listed for sale. 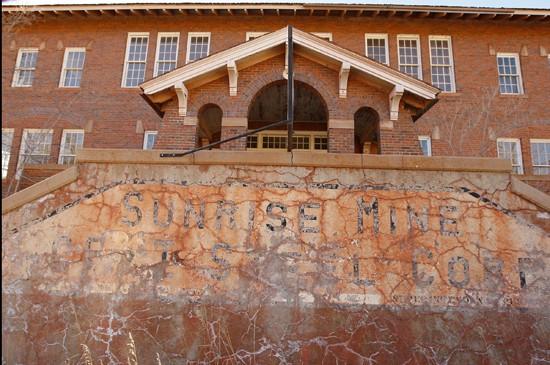 A sign for the Sunrise Mine adorns the steps leading up to the old YMCA building at Sunrise. Sunrise was a company town owned and operated by the Colorado Fuel and Iron Co. of Pueblo, Colo., from 1899 to 1980.
The Associated Press

With the right combination of patience, money and imagination, it might turn out to be temporarily vacant rather than permanently abandoned.

Sunrise is nestled among the ponderosa pines of Eureka Canyon in Platte County, near the town of Hartville.

Mining began in the area 8,000 to 12,000 years ago. It wasn't iron or copper the early people sought, but the red ochre that stains the landscape.

Colorado Fuel and Iron Co. of Pueblo, Colo., mined on the surface and underground between 1899 and 1980, extracting 42 million tons of iron ore.

Miners from many countries labored at Sunrise. Some lie buried in graves bordered with elaborate wrought-iron fences near Hartville. Their surnames were Greek Italian, Japanese, Scandinavian and Mexican.

Jesus Rodriguez, 81, of Hartville, started working at the Sunrise Mine in 1950. Following a stint in the service, he returned in 1952.

Rodriguez was paid $1.09 per hour to start. But it beat his former life as a sharecropper. He later became an underground supervisor and was there when the mine closed in 1980.

"After grubbing on the farm and for Uncle Sam, and with a wife, it was the best job I had," he said.

Thousands of tons of ore were extracted from a 650-foot-deep pit called the "Glory Hole." Within an short walk, miners washed away grit and sweat in a shower house that still stands, complete with light fixtures and old pipes.

The Glory Hole, with its formidable stone face and ore still in evidence, is now full of water.

The grandest structure is the Italian Renaissance Revival-style YMCA building constructed in 1917. It included a combination auditorium-gymnasium-movie theater, a reading room, a sewing room and even bowling lanes. The building has managed to preserve its air of importance, along with its window glass.

Saloons sprang up in Hartville since liquor was prohibited in the company owned Sunrise. There also were diversions of a feminine sort.

Today, only a caretaker remains.

Although dilapidated, most buildings still standing - which include several bungalow-style houses for miners and their families - and have survived in relatively good condition, owing to their brick construction.

Sunrise now seems at the dawn of a new, and if still uncertain, era. The 225-acre Sunrise Mine and Town Site Historic District and surrounding land is up for sale, 1,400 deeded acres in all.

Curtis James, owner of the James Land Co. in Saratoga, said the asking price for the whole kit and caboodle, including water and mineral rights, is $3.5 million. Despite some inquiries, there have been no offers. The property is owned by a Boulder, Colo., man, whose father bought it years ago for back taxes.

James said the site might be developed in a couple of ways. A person or private group might want to restore some of the buildings and perhaps build cabins on portions of the site.

Alternatively, he suggested it might be turned into a state park. The Sunrise Mine and Town Site Historic District is listed on the National Register of Historic Places.

Along with opportunities, former mine sites often pose challenges.

Bill Locke, manager of the state Abandoned Mine Land program, said hazards like mine shafts and dangerous high walls are still present in the Sunrise district. Subsidence is also a concern, though apparently not at the town site itself.

A berm was constructed at the Glory Hole to stop a possible wave that could result if portions of the pit walls collapse. The fear is a Sunrise tsunami of sorts could wash into the buildings nearby or even the town of Hartville a mile down the canyon.

"It's a very historic site," Locke said. "I hope something good comes of it. If they do find a good use for it, I'd hope they would mitigate those hazards before they let people anywhere close to them."

Copyright © 2009 Associated Press. All rights reserved. This material may not be published, broadcast, rewritten, or redistributed.

Selling agent Curtis James stands Jan. 21 in what used to be the large shower room where miners would wash themselves of the thick red dirt after working deep in the mines in Sunrise, Wyo. The abandoned iron ore mining town has been listed for sale.

A sign for the Sunrise Mine adorns the steps leading up to the old YMCA building at Sunrise. Sunrise was a company town owned and operated by the Colorado Fuel and Iron Co. of Pueblo, Colo., from 1899 to 1980.
© Copyright 2021 Billings Gazette, 401 N Broadway Billings, MT | Terms of Use | Privacy Policy
Powered by BLOX Content Management System from TownNews.com.
You don't have any notifications.