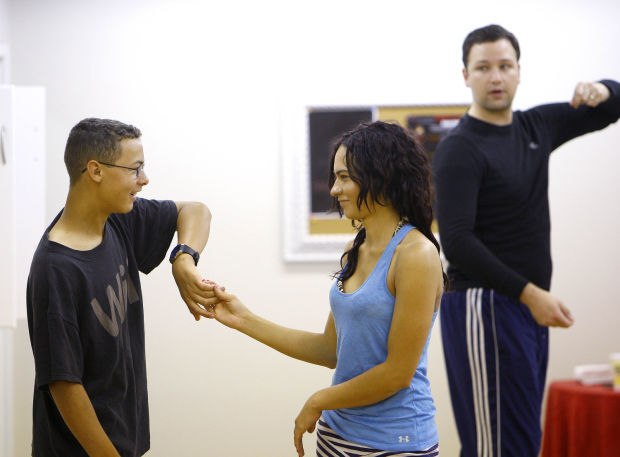 Carissa O’Malley, center, and her brother Cameron, 15, take instructions from dance teacher Andrew Nelson at the Heart of Dance Productions dance studio recently in Casper, Wyo. Carissa, 22, legally adopted Cameron after he was drifting through different foster families. After the adoption, she took him off of his prescribed psychotropic medications and increased scheduled activities such as cycling and dance lessons. 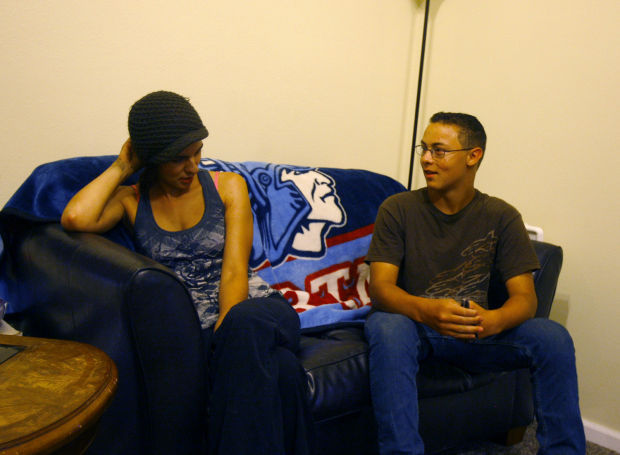 Carissa O’Malley sits with her brother Cameron in the house they rent in Casper.

CASPER, Wyo. — For Cameron O’Malley, weekends at his sister’s house meant tucking a pair of jeans, a few shirts and his toothbrush into his backpack. The 15-year-old’s foster mom would zip a weekend’s worth of pills the size of jelly beans into plastic baggies.

Cameron and his sister Carissa, 22, knew the routine: Take daily with food.

They made Cameron’s brain feel weird, like he was thinking in fog. But if the adoption was to go through, he and his sister had to follow the rules.

Nearly one in three foster children in Wyoming is prescribed psychotropic medications like the ones Cameron took. That’s more than four times the rate found in other low-income children not living in foster care, where the frequency is one in 12.

Critics say psychotropic drugs — any medication that affects a patient’s mood, thought or behavior — lack evidence as to their effectiveness and safety in children.

Many of the medications have not been studied in children, and doctors say they can’t assume what works on adults will be safe for children, whose central nervous systems are still developing.

Carissa believes state and medical officers rushed to use prescriptions to control Cameron, who acted out as a child.

“They want to put a diagnosis on everything,” she said.

Cameron was a “lost” child in the middle of a large family, one social worker wrote in a 2011 report. His parents focused on the youngest of the family’s 12 children, giving little to no attention to the older kids, the worker wrote.

In reports filed with the Wyoming Department of Family Services between 2004 and 2011, doctors attributed Cameron’s conditions and behaviors to abuse and neglect he endured as a young boy.

His mother was charged with neglect, and Cameron left his biological family for good about 2010.

By 2011, he’d been diagnosed with ADHD, mild long-term depression, post-traumatic stress disorder and anxiety. He had lived with foster families on five separate occasions.

Carissa didn’t like the medications, and she wasn’t alone.

He felt lethargic while on them. He was tired, not himself. Carissa recalls how out-of-touch he was, slow to engage in conversation.

But to not take the medications? He thought he’d get in trouble.

Reports on file with DFS suggest that while in foster care, Cameron attended classes regularly. His teachers described him as respectful but easily distracted. He required multiple prompts to stay on task.

He had an active imagination and was easily absorbed into his drawings. Cameron received a few disciplinary procedures in school but was never suspended. His grades varied tremendously — from A’s to F’s.

“Cameron needs to work on listening to directions,” one teacher wrote on a report card. “When Cameron tries hard in class, he does excellent work.”

Cameron told doctors repeatedly he was sad about leaving his brothers and sisters, who were also living in foster care.

A doctor once noted that fluoxetine, prescribed for Cameron’s depression, seemed to calm Cameron down. Beyond that, doctors never noted whether the medications were working or not.

Nearly 30 percent of the state’s 3,500 foster children were prescribed at least one psychotropic drug last year, according to data from the state Department of Health.

In comparison, only about 8 percent of the 57,000 Wyoming children whose low family income qualified them for Medicaid took psychotropics.

Though no definitive national average has been tabulated, several regional studies suggest that Wyoming is among the most frequent prescribers of the medications.

In 2004, a report showed that psychotropics are prescribed to foster care kids at rates three to 11 times greater than the rate for Medicaid-insured youngsters.

Though the rate of psychotropic medication use among foster children has decreased in Wyoming since 2010, the number of children taking the drugs has increased slightly.

Some experts attribute the higher rate of psychotropic drug use to the fact that foster care children are more likely to have suffered emotional or mental trauma than their peers, said James Bush, the state medical officer for Wyoming Medicaid.

Foster children have often been abused or neglected seriously enough to draw the attention of state authorities. On top of that, many have been taken from their homes.

Some experts say children in foster care are up to twice as likely to be diagnosed with a mental health disorder than other children.

But that doesn’t account for the fact that a child in state custody in Wyoming is four times as likely as his peers to be taking the mind-altering medications.

Carissa’s fondest memory of her brother is at a doctor’s office when Cameron was about 3 years old and his younger sibling needed blood drawn.

As the nurse brought the needle toward their infant brother, Cameron broke out into tears.

“No!” Carissa remembered him saying. “Don’t poke my brother!”

Carissa lost touch with most of her siblings around the time she aged out of the foster care system. She moved into her own place about five years ago and works now as a welder and hairdresser in Casper.

She said she wanted to adopt as many of her 11 brothers and sisters as she could. Carissa believed that DFS allowed her to communicate with Cameron because no foster parent was pushing to adopt him, unlike the case with her other siblings.

And when he did, Carissa said no more medications.

Cameron’s prescriptions always made his sister uneasy. Carissa rented books from the library on mental health and ADHD. She researched the side effects of many psychotropic medications — suicidal thoughts, severe liver damage, heart-related problems.

She signed up Cameron for a local mountain biking club. She volunteered him to shovel stalls and groom horses at a nearby therapy farm, and when his grades started slipping, she wrote him a daily schedule.

“He needed an activity, not medication,” Carissa said.

She signed the last page of adoption paperwork on Valentine’s Day.

Bush, the state medical officer for Medicaid, wanted to know how doctors were prescribing the drugs to Wyoming children. To find out, the Department of Health examined Medicaid claims from 2009 to 2013 and counted how many listed a psychotropic prescription.

Bush looked for children who fell into one of several categories and found that between 1 and 2 percent of foster care children in Wyoming were prescribed more than 150 percent of the dosage recommended by the U.S. Food and Drug Administration during those years.

Between five and 11 children under the age of 5 were prescribed psychotropic medications, and one child in each of his study years took more than five of those medications at the same time.

Little is known about the drugs’ long-term and short-term risks, especially when they’re used in combinations. That prompted the Health Department to add an extra layer of accountability to outlier cases, where a child’s dosage is high, his age is young or the number of prescribed medications is greater than five.

Now, every case that exceeds one of Bush’s parameters — too many, too much or too young — will receive a second look from medical faculty at the University of Washington, which partners with the University of Wyoming as the state’s medical school.

It’s not that in all cases doctors made mistakes in prescribing these children’s medications. Sometimes, exceeding the recommended dose is advisable, Bush said.

But those cases should be rare, he explained.

Psychotropic drugs themselves are not problematic, he said. Being underdiagnosed is a problem, too. With kids, it’s often a very tentative diagnosis.

“How can you diagnose a 2-year-old as psychotic?” Bush said. “The children’s brain is still evolving, it’s still maturing.”

Marty Nelson, clinical services administrator for the Wyoming Department of Family Services, said he advocates as few medications as possible.

“It’s better for kids to not be on medications or to be on as few medications as they need,” Nelson said.

But there are cases when medications like psychotropics are necessary, Nelson said. For foster care children, that’s a decision reached by a group of physicians, case workers and, ideally, the child’s biological parents.

“While we want the therapy to deal with the depression and anxiety, that’s going to take a little time,” Nelson said. “So for the six months before the talk therapy, the children are better off not beginning depressed or anxious.”

As talk therapy increases, ideally the medications should decrease.

“What I’m hoping for them as adults is saying, ‘Get your talk therapy and you won’t have to get your medications,’” Nelson said. “But I don’t know how that tracks out over time.”

Cameron doesn’t fall asleep in class anymore. He said he has matured since moving in with Carissa a year ago. He’s not angry. No tantrums, no behavioral problems, Carissa said.

Why? Cameron threw a thumb in Carissa’s direction.

Before moving in with his sister, Cameron had never played an organized sport, never been part of a team. So far, mountain biking makes the short list of Cameron’s favorite things.

“You feel free because you get to go as fast as you want,” he said.

His favorite thing, though, is hanging out with his sister. He walks their dogs, Capone, Delilah and Envy, outside every day.

Carissa knows she has three years left with Cameron before he is 18. She hopes that by then he will have found a passion in his life.

She recently sent him on a three-week adventure trip in California so he’d have some positive childhood memories. They plan to spend time at a brain center in Colorado to explore alternative treatment options.

Cameron still deals with attention issues, and because of developmental delays, he needs help focusing. But the two of them steer clear of the medications that doctors once proposed to address those problems.

“By taking a pill, it doesn’t just automatically make things better,” Carissa said. “That is not the answer, especially not by itself.”

A few days ago, a postcard came in the mail.

On the front was a picture of teenagers jumping into the air, flanked by ice-capped mountains. On the back, she read Cameron’s scratchy handwriting.

“I have been haveing (sic) the best time of my life so far,” he wrote. “One amazing thing I found was a dead baby octopus. I picked it up and chased people with it. I found a whole bunch of sea shells. Well I better get going. Sincerely, Cameron O’Malley.”

Carissa O’Malley, center, and her brother Cameron, 15, take instructions from dance teacher Andrew Nelson at the Heart of Dance Productions dance studio recently in Casper, Wyo. Carissa, 22, legally adopted Cameron after he was drifting through different foster families. After the adoption, she took him off of his prescribed psychotropic medications and increased scheduled activities such as cycling and dance lessons.

Carissa O’Malley sits with her brother Cameron in the house they rent in Casper.