Subscribe
Read Today's E-Edition
Share This
Voices of the Past: A suitcase full of letters helps tell stories of World War II prisoners of war
0 Comments
Share this 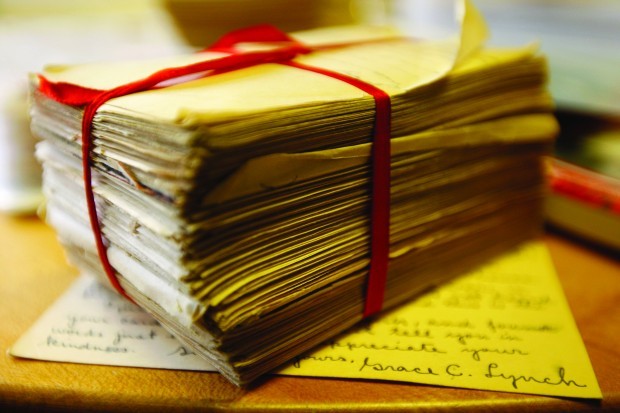 A stack of 3-by 5-inch notecards that Cora Reed used to take notes on during Japanese POW broadcasts. 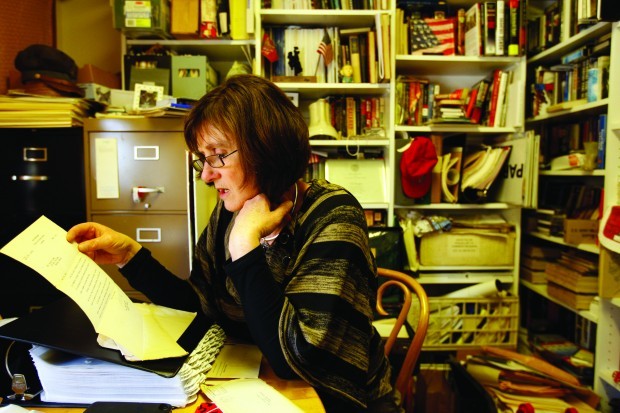 Val Burgess of Sheridan reads a letter written to Cora Reed. Burgess is researching the letters written to the former Sheridan woman.

SHERIDAN, Wyo. -- The letters came from all over. They came from small towns like Keokuk, Iowa, and Rockland Ill., and big ones like St. Louis, Mo., and Philadelphia. Some arrived on fancy letterhead, others on postcards. Most start like this: Dear Mrs. Reed, thank you.

I wish to thank you for sending me the message from my husband, Col. Thomas Austin Lynch, who is a prisoner of war in Taiwan Camp on Formosa. I have not heard from him since Dec. 1941 and this is the first message I have had.

We sincerely appreciate and thank you for relaying the message from our son… We thank God and may He bless you for your kindness in writing us.

We have been writing since Jan. when the war department sent us instructions etc. but evidently the mail has not yet been received. I appreciate your interest in writing to me along with many others.

Letters like these were all but forgotten -- stashed in an old suitcase found in an old house -- until last fall. They tell of the Americans captured by Japanese troops during World War II and the agony of their families, waiting for word of their loved ones.

They also tell of a woman sitting by her radio, scanning the airways for shortwave broadcasts from Japan, in hopes of hearing news of American POWs.

Val Burgess, a Sheridan resident, is an amateur historian with a longstanding interest in prisoners of war. Her uncle Vernon Burda was a navigator in a B-24 bomber crew shot down over Croatia during World War II. He survived 10 months in a German POW camp.

Burda expressed a desire in 1993 to return to the place where he was once held captive. Burgess was fascinated. It was the first time her uncle spoke of his experience in the war. A commercial designer, she offered to help organize the fundraising campaign helping Burda and other survivors of the camp go back. Soon her phone started ringing with people eager to learn more about the trip. Many were old POWs.

“They turned into these amazing people with these stories they were telling me,” Burgess said. “It was like ‘Are you kidding me? You did what?’”

She’s been interested in POWs and recording their stories ever since. Over time she has built up a reputation, interviewing POWs across the country. It was in this way that Burgess came by the suitcase.

A woman in the 1980s bought a home in Sheridan. There, she found an old, black suitcase stuffed with letters. She held onto it for years, waiting for the right person to give it to. Then Burgess came along.

A look inside the suitcase reveals a jumbled stack of 3-by 5-inch notecards tied with a red bow, scrolls of paper and stacks of letters and postcards.

Together they might tell a hundred stories, or a thousand.

Her obituary says she was born in 1897 in Denton, Texas. In 1932, she married George E. Reed in Hardin, Mont. George was a therapist with the Veterans Administration at Fort McKenzie. He died in 1978. Cora died in 1980. The couple’s two sons are also dead, each passing at a relatively young age.

During the war, the Sheridan Press interviewed Cora about her letter writing. She began listening to Japanese POW broadcasts in December 1942. Whenever she heard an American prisoner's name, she wrote to members of his family.

At that time, she had received 300 responses from families in every state in the union except Delaware, South Dakota, Mississippi and Wyoming.

She told the paper that it was sometimes difficult to hear the names of the soldiers because the Japanese broadcaster flipped his l's and r’s. Noise at a construction shop across the street from her home also made it difficult to hear sometimes.

“A name like Smith or Jones isn’t so bad, but when you try to get a name like Uczyuski or Kondrzsiewicz coming in Japanese phonetics with a little static mixed in, it’s a real job to get it right,” Reed told the paper.

She frequently used a postal directory with listings throughout the country to track down the right names. George filed the names of all the soldiers’ families to whom she wrote. On a large map of the United States, he placed a white pin for each card sent and a red pin for each card received.

Little else is known about the Reeds, Burgess said. She has researched the former Sheridan couple since October, when she acquired the suitcase, but has turned up little outside of the newspaper article.

It says the Reeds were longtime hobby radio listeners before they started listening to the Japanese broadcasts.

Theirs was a common hobby, said David Hochfelder, assistant professor of history at the State University of New York, Albany, who is researching wartime radio broadcasts from Germany, Italy and Japan.

It is unknown how many Americans tuned into these wartime broadcasts, Hochfelder said, but he knows of one family that received around 140 letters regarding an interned relative mentioned on Radio Tokyo.

“There were a lot of women,” Berg said in a telephone interview from his home in Massachusetts. “This was something they could do at home and feel they were doing to help the war effort.”

Many of the responses received by Reed mention other letter writers.

Soldiers sometimes spoke during the POW broadcasts, Hochfelder said. In other instances Japanese broadcasters read out letters composed by the prisoners. They typically listed the soldier’s name, his next of kin and a message for his family.

“The purpose of these broadcasts was to draw listeners,” Hochfelder said. “They would intersperse the POWs in with the slanted news items.”

The recordings appear accurate, he said, noting they were designed to boost the rest of the broadcast’s credibility. Listeners were urged to record the POW messages and inform their next of kin.

That made them unpopular with the U.S. government, who worried about citizens listening to enemy propaganda. Listening was not illegal, but disseminating the content was.

The Foreign Broadcast Intelligence Service attempted to discourage letter writers like Reed. Sometimes they wrote writers asking them to stop. Other times they sent uniformed military personnel to writers’ homes.

“In the 1930s and ’40s radio was so new, people didn’t understand the social psychology,” Hochfelder said. “People attributed the fall of France to Nazi propaganda.”

Cora Reed received a letter from the War Department.

“Dear Mrs. Reed,” Col. Howard F. Bresee wrote in a letter dated April 17, 1943. “You may rest assured this government is greatful (sic) for your sincere desire to render a service to the relatives of prisoners of war.”

But, he added, “It is the policy of this office to discourage individuals in forwarding shortwave messages. To do so is a duplication of the service now rendered by government agencies.”

Reed told the Press she stopped writing after receiving the War Department message, but that responses from her previously written letters were still coming in from across the country. She never wrote the families back after hearing from them.

“Our family isn’t much to write,” she explained.

Burgess hopes to make an online database of all the soldiers and families listed in Reed’s letters. She spends her free time pouring over the documents and researching the men and women mentioned.

She has, for instance, located the descendants of a general and his wife who were captured in the Philippines. The family, who lives in Connecticut, was exhilarated at news of their forbearers.

Yet to catalog all the letters, research all the individuals involved and compile that information on a website is labor intensive. Burgess is writing grants she hopes will allow her to take on the work full time.

Building an online archive will allow people today to learn more about what their families went through during the war, Burgess said. These letters represent their family history.

“These are peoples’ lives,” she said. “Right now we are bringing so many thousands home.”

Contact Val Burgess with information about Cora Reed or POW letters at vburgess@burgessdesigngroup.com

Christmas celebrations kick off in Frankfurt and Stockholm

Ukrainian and Russian soldiers train for a harsh winter ahead

Ukrainian and Russian soldiers train for a harsh winter ahead

A stack of 3-by 5-inch notecards that Cora Reed used to take notes on during Japanese POW broadcasts.

Val Burgess of Sheridan reads a letter written to Cora Reed. Burgess is researching the letters written to the former Sheridan woman.