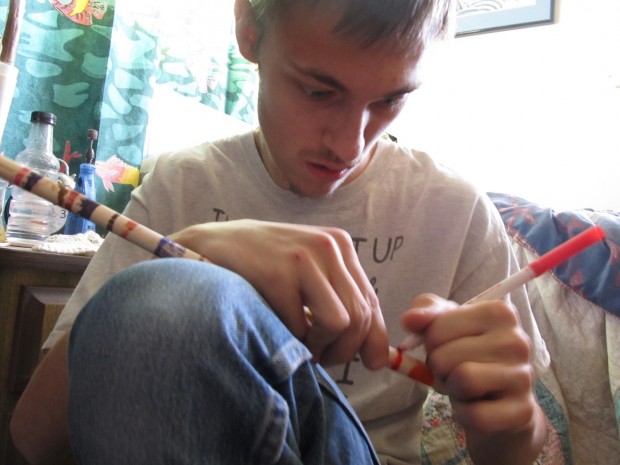 Leonard Williams works on coloring a walking stick in his Riverton bedroom. Williams, who is autistic, started creating walking sticks as a hobby, but as people began to request his creations, he launched a business called Autisticks. Each stick he creates is different. 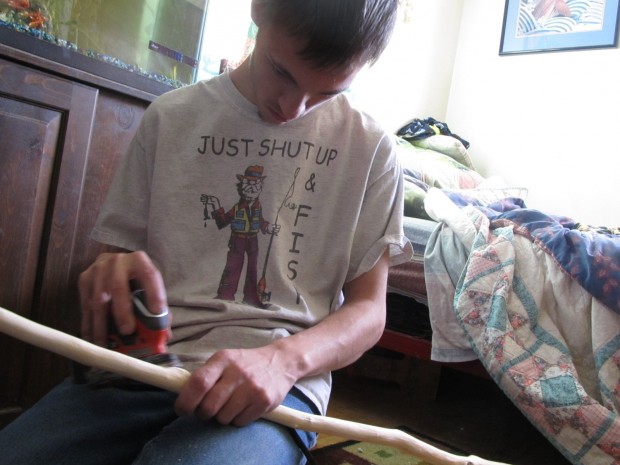 Leonard Williams sands a future walking stick in his bedroom in Riverton, Wyo. Williams works from room for now, but will eventually be moving into a shop in the backyard when it’s finished. 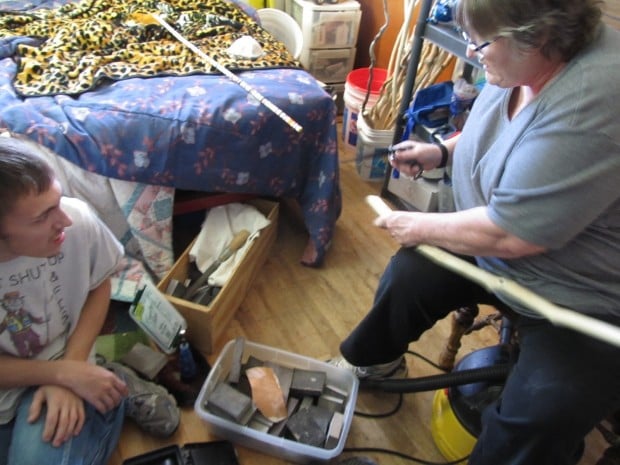 Debra Williams helps her son Leonard Williams by cutting off the end of a stick he will eventually transform into a walking stick. Debra helps her son when he needs it, but for the most part the sticks are entirely Leonard's own creations. 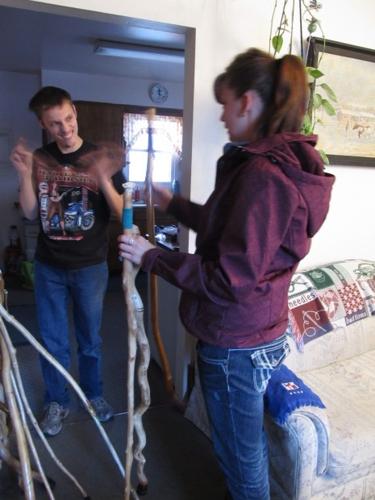 Leonard Williams flaps his hands in excitement as he makes a walking stick sale in his Riverton, Wyo., home. Williams, who is autistic, creates walking sticks and sells them from his home, at art and craft fairs and at a gallery in Lander.

RIVERTON, Wyo. — A walking stick is meant to offer support, easing weight from joints to wood. It is meant to assist in independence, relieving a need for support from someone else. It can open new possibilities: suddenly a walk isn’t too long, or terrain quite so treacherous.

Leonard Williams’ walking sticks give his customers these things, but they also provide them for him.

Williams, 21, collects sticks and peels, sands, shapes and sometimes colors them before adding a finishing varnish. It is the only time he is truly focused and calm, when his fine motor skills are at their best and his signature “flicking” or flapping of his hands stilled so he can wield drills and saws and sanders.

Leonard was diagnosed with autism as a baby, about 20 years ago, before the term filled headlines and people knew what it meant.

Autism is a developmental disability, varying in the ways it impacts a person. Some autistic people can’t speak at all, while others are quite articulate.

Leonard didn’t hit developmental marks at the same rate as other kids.

When the family heard the diagnosis, they accepted it, said his mother, Debra Williams. They didn’t want medication or even to use the word disability.

“Leonard was just Leonard,” she said.

Leonard received help at school working on motor and social skills, but the real work was constant at home, Debra said.

Specialists told Debra her son wouldn’t be able to put on his own jacket. She sewed hand prints inside so he’d know where to place his arms through the sleeves. They said he’d never tie his own shoe. Debra vowed he would — and he did, although it took several years.

“We knew the world would never adjust to Leonard, so we better work hard to make Leonard adjust to the world,” Debra said.

Leonard showed an autistic characteristic early on, becoming infatuated or obsessed with a certain topic. Debra calls it being “stuck.” When he was little, it was bugs. He wanted bug clothing, to read only bug books and play with bug toys.

As he got older, his parents helped ease him away from bugs trying to find something more age appropriate, such as dinosaurs and then cars. They’d explain to him simply that something was better for boys his age. And Leonard looked to his older brother as a role model. The whole family went on outings, hunting, fishing, or — as Leonard is quick to remind everyone — sledding.

They’ve tried to keep him well rounded, and he no longer seems to get “stuck” on one thing, Debra said. He loves his fish, but also his lizards and his walking sticks.

His love of walking sticks started as a 4-H project about six years ago. His older brother had entered a walking stick in the county fair a couple of years before. Leonard insisted he wanted to create the same project.

Through the years, Debra tried to find something that incited passion from her son. The house is cluttered with the activities he’s tried: painted rocks, watercolors, molding clay into orange fish, dried leaf collages.

Debra thought a walking stick would require the attention span Leonard didn’t have, but she agreed to let him try, thinking it was a project he could chip away at, even if took all year.

A couple of hours after he had started, she checked on him, expecting to find he’d moved on to a new interest. Instead, he presented a finished stick, a smile and a serious question: Do another one?

Debra, a wood artist, held the stick and found it perfectly smoothed. It won Leonard a purple ribbon that year at the fair.

Afterward, Leonard wanted to make another and then another. But that isn’t how Debra knew her son had discovered something he loved.

“When Leonard is working on a stick,” she said, “he doesn’t flick.”

A few years ago, the school began to pressure Debra to have Leonard take a job to learn responsibility and develop a work ethic.

Debra agreed with part of the suggestion. She did want her son to feel the sense of accomplishment from productivity and the pride from a job well done.

But the choices were limited and none seemed to suit her son.

Meanwhile, Leonard was still making walking sticks, collecting sticks from the ground while out walking or using ones his uncle brought from Utah. Friends and family were starting to ask about buying them. The family saw the sticks as a perfect opportunity for Leonard to work.

They talked with Leonard, who loved the idea, and decided they’d eventually make a plan to help him start his business.

Walking sticks, Leonard yelled, pointing at a man cutting limbs from a tree. Debra stopped and together they asked the man for his tree limbs, telling him about Leonard’s business.

The man said they could have them all and said he knew other people cutting trees, did they want more?

Debra gave the man her address and said people could leave sticks or branches in the yard.

More similar incidents happened, Leonard yelling stop, the two talking to a tree pruner and giving their address, explaining the business to people in town, encouraging anyone to drop off sticks or limbs to their yard.

A couple of days later, Debra returned home from errands. She found her yard brimming with sticks.

Leonard’s speech is limited and sometimes hard to understand, but not when he’s describing his sticks.

“Pretty,” he says, showing one.

“Split,” he says, shaking his head and frowning at one with a crack down the middle he isn’t sure he can use.

One woman bought a colorful short stick for her granddaughter who had a disability that limited her walking. The little girl didn’t want a “grandma cane,” and Leonard’s creation was the perfect fit, Debra said.

He debuted at a craft and art fair in Dubois in August. Leonard took 18 sticks to sell. Debra wasn’t sure how it would go, if people would be receptive to her son and his walking sticks.

Leonard sold out within two hours.

He also sells sticks at Global Arts in Lander.

Reanna Heil, a respite provider who has worked with Leonard for about a year, attended the first show with him.

The business gives him a chance to practice real-life social skills, Heil said. She has to work with him, reminding him not to interrupt people. Sometimes he likes to shout at people at other booths, wanting them to come see his walking sticks. And he’s learning about money, the hardest thing for him to understand. Sometimes he thinks he’s supposed to pay people instead of the other way around.

For now, Leonard creates his sticks in his bedroom in the family home in Riverton, sitting on the floor. A light dust covers the house from the sanding that happens down the hall.

Eventually he will move to the shop that local high school students built in the backyard. The small shed, “Leonard’s shop,” as he proclaims it, is not quite finished.

Debra tries to step back and leave the business up to Leonard. He picks the sticks from the stockpile in the backyard and creates the design.

His mother helps when he asks, often running her hands over the sticks to offer her approval of the smoothness. She also paints the finishing varnish on the sticks and adds the brand with Leonard’s company name: Autisticks.

Debra also deals with the money, used mostly to buy new supplies for the business.

The family thought at first Leonard’s business would be Internet-based. But the interest locally was so big. Plus it allowed Leonard to meet his customers and form connections in the community. It seems everywhere they go, Leonard is waving and greeting people who know him by name.

While Leonard still dictates his work hours, his mom does have to remind him about the orders placed for Christmas.

Leonard doesn’t seem to mind the work. He happily grabs sticks and, when his mom asks if he’s done for the day, he answers no, reaching for another, pausing to show off others recently finished. All the things Debra wanted for her son, industriousness and purpose, pride and confidence, he’s found in the sticks he creates.

While he doesn’t use a stick for walking, they still support him.

Digital director at the Billings Gazette.

Leonard Williams works on coloring a walking stick in his Riverton bedroom. Williams, who is autistic, started creating walking sticks as a hobby, but as people began to request his creations, he launched a business called Autisticks. Each stick he creates is different.

Leonard Williams sands a future walking stick in his bedroom in Riverton, Wyo. Williams works from room for now, but will eventually be moving into a shop in the backyard when it’s finished.

Debra Williams helps her son Leonard Williams by cutting off the end of a stick he will eventually transform into a walking stick. Debra helps her son when he needs it, but for the most part the sticks are entirely Leonard's own creations.

Leonard Williams flaps his hands in excitement as he makes a walking stick sale in his Riverton, Wyo., home. Williams, who is autistic, creates walking sticks and sells them from his home, at art and craft fairs and at a gallery in Lander.