Wolf packs attack the toughest prey in Yellowstone
Share this
× 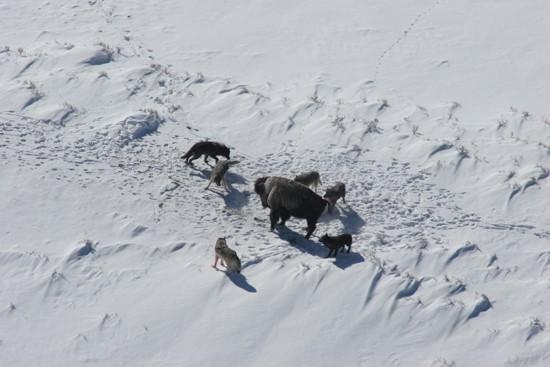 Members of the Mollie's pack surround a bison in this February 2005 photograph. The wolves try to harass the bison into deeper snow, where the bison are less of a threat and easier to attack. Bison that stand their ground typically aren't attacked. 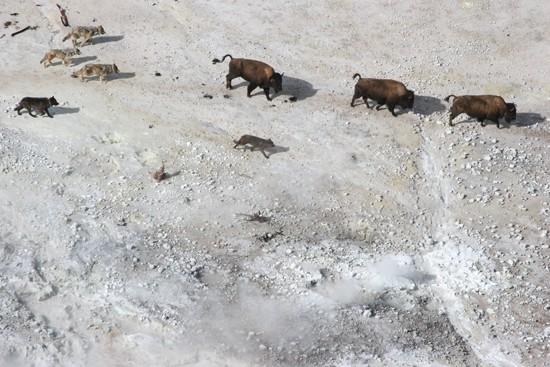 Wolves from the Mollie's pack trail bison in Yellowstone National Park in March 2007. The pack lives in the Pelican Valley in the east-central portion of the park. Elk migrate out of the region in winter, leaving bison as the pack's only large prey. Consequently, the wolves have had to adapt to killing bison. 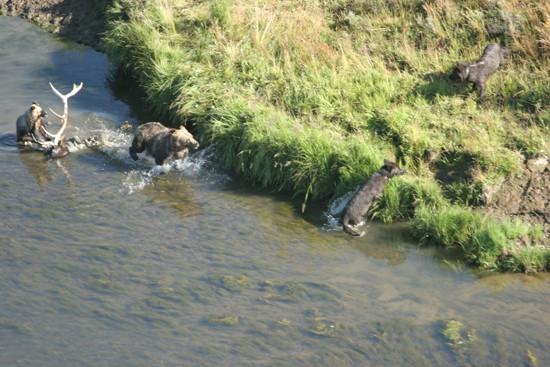 A grizzly sow chases wolves from the Mollie's pack away from a bull elk that was killed in a stream in August 2005. Grizzlies often take over wolf kills. 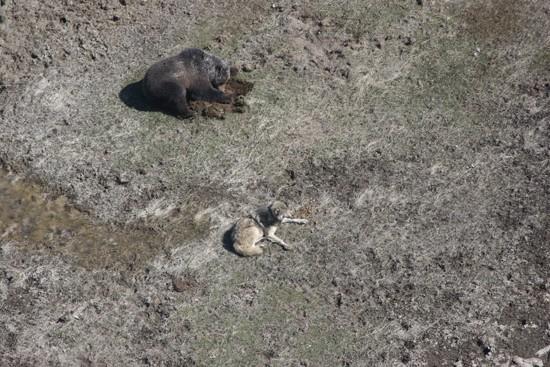 A grizzly bear, left, sits atop a carcass in Yellowstone National Park in late April 2007 as a Mollie's pack wolf rests nearby. Grizzly bears usurp about 80 percent of the Mollie's pack kills in Pelican Valley between March and October, researchers have found.

It's not easy being a bison-eating wolf in Yellowstone National Park.

"Why get your head bashed in if you can take an elk," said Doug Smith, leader of the Yellowstone Wolf Project. "They have to have the deck stacked in their favor."

Yet in the winter, one pack in particular, Mollie's pack, has few other options. Elk migrate out of the wolves' range - the Pelican Valley in the east-central portion of the park - leaving only bison as large prey. That means the pack either has to migrate or adapt to kill bison. Mollie's adapted.

In general, such kills take a long time because the wolves have to "juke and jive" to avoid being kicked or gored by the bison. One bison kill documented by the team took more than nine hours.

"They attack the back, not the front," Smith said. "It's a dirty job."

For that reason, they prefer prey that runs away. Animals like bison that typically stand their ground may be more intimidating to the wolves, and they quickly lose interest.

"They hate things that stand their ground," Smith said. "This may sound bad, but they're cowards. We think 95 percent of the things they kill are fleeing. Things not fleeing that they kill are weak, have a broken leg or are starving."

He recounted seeing one bison churning through deep snow as wolves jumped up and grabbed on to its neck. Once the bison hit a bare patch of ground, it shook its massive head and the wolves went flying. Another researcher saw a bison kick and kill a wolf. And the Mollie's pack alpha female was spotted hobbling around on a broken leg, possibly from a run-in with a bison.

"One of the biggest topics of wolf research is what they kill and why," Smith said. "They're not going to kill a bison unless it has a problem. They tend to be pretty selective with elk, too, but occasionally they will kill a healthy elk. Not so with bison."

Two other packs have also adapted to opportunistic killing of bison - the Cougar Creek and Gibbon Meadows packs on the west-central side of the park. They don't take as many bison as Mollie's pack. Common to all of the packs is that 95 percent of bison taken by wolves are killed in the winter. The more severe the winter, the more bison wolves will kill. Come summer, the wolves switch back to preying on elk, which are more abundant and easier to kill.

Overall, bison are a small part of the Yellowstone wolves' diet, and wolf kills make no dent in the bison population. Out of 323 wolf kills documented by the park's staff in 2007, only 11 (3.4 percent) were bison. Of those kills, six were calves, three were bulls and two were adults of unknown sex.

There's only one area left in North America where wolves make a living eating mostly bison - the Wood Buffalo National Park and nearby Slave River Lowlands in Canada. Bison there make up 80 to 90 percent of the wolves' diet. In other areas where bison are present, such as the Mackenzie Bison Sanctuary in Canada, wolves would rather kill moose than bison, even though bison are more abundant.

"Bison may be the most difficult to kill of all prey items," Smith said, more so than a moose or even a musk ox.

Yet years ago, when bison freely roamed North America by the thousands, wolves likely ate a lot of bison.

"North America pre-European settlement was a bison-wolf economy," Smith said. "The percentage of wolves that lived off of bison I'll bet was 60 to 70 percent. Now, it's less than 1 percent. Now, the only wolves that eat bison in North America are here and in Wood Park. Wolves in the McKenzie game sanctuary eat bison occasionally, but they prefer moose. When they can pick, they pick moose.

"Those are the three main areas, which is kind of sad."

Given that the plains wolves were exterminated, wolves in Yellowstone did not learn their skill culturally; they had to relearn the process in the park, Smith said, proving how adaptable the animals are to killing new prey.

Wolves that used to follow bison herds to feed were probably much bigger than the wolves of today, Smith said, noting that "you had to be big to kill bison."

Such a scenario goes against a classic zoology standard called Bergmann's rule, which says that an animal's body mass increases with colder climate conditions and the higher the latitude at which it lives. Smith said wolves of the central Plains were probably the biggest wolves because of bison. Those wolves may have weighed as much as 170 pounds.

Not surprisingly, some of the biggest wolves in Yellowstone are in Mollie's pack. Out of the 350 wolves that have been weighed in Yellowstone National Park since their reintroduction in 1995-96, only 10 weighed more than 130 pounds, Smith said. Half of those big wolves were found in Mollie's pack. One Mollie's pack wolf is the biggest weighed so far, tipping the scales at 142 pounds. But the wolf had about 10 to 15 pounds of meat in its stomach when trapped, Smith added.

"The Mollie's are among the biggest wolves we handle in the park," he said. "They're just a bigger, more robust animal."

It only makes sense, Smith said. As former park scientist John Varley once told him, "Only the big wolves survive. If you're not big and strong, you're not going to live."

Especially if you're a wolf that hunts bison, Varley could have added.

Mollie's pack is about average in number compared with the park's 10 packs, totaling nine adults and five pups when counts were taken last winter. But Smith said it's a pack stacked deeply with four big, adult males. The alpha male, number 586, is 6 to 8 years old.

"Their pack retains more big males more so than other packs," he said. "We're seeing that adult male wolves are key in killing bull elk and bison."

In killing bison, the more big males the better, Smith said, whereas in packs that kill elk, "You do best killing elk if you have one big male. It does not matter if you have two or three."

Male wolves bulk up at age 3 but don't achieve their maximum body size until they're between the ages of 4 and 5, Smith said. Adult males probably have little time to enjoy their beefy stature, however, since the average age of death for Yellowstone wolves is 5.

Because there's a lot of work that goes into killing a bison, it's important that the payoff is worthwhile. In the case of a full-grown bull that can weigh up to a ton, the benefit can be some serious snacking. Even a smaller bison offers a lot of meat, meaning that other predators quickly take notice. Wolf kills of bison are often overtaken by grizzly bears.

"Every kill that we document from March to October is taken over by grizzly bears," Smith said.

Wolves may tolerate a bear's usurping their kill, or they may try to annoy it so much that it leaves.

"They peck and poke and the bear gets annoyed and leaves," Smith said. "But 80 percent of the time the bears win."

Adult female grizzly bears with cubs of the year are at a disadvantage in taking over kills, since they have to protect the cub, which wolves will kill if given the chance. November through February, though, the bears are hibernating, so wolves get the meat largely to themselves.

That's probably important for wolves. Recent studies are showing that the summer months can be arduous for Yellowstone's wolf packs.

"Essentially what's emerging is that summer is a hard time for a wolf," Smith said, as their prey disperses throughout the 2.2-million-acre park. "I think if we trapped them in the summer we'd see pretty lean wolves."

Kerry Gunther, bear management biologist for the park, said the introduction of wolves has helped bears by providing carcasses throughout the year, instead of just in the spring when animals drop from winterkill. When crops such as whitebark pine nuts are thin, the bears turn to wolves to provide carcasses as a supplement.

"Overall, I'd say it's a positive for the bears," Gunther said.

Although bull bison would make a hearty meal, they are rarely killed by wolves. More typically, wolves kill bison cows and calves. Bison bulls are more likely to die when they gore each other during the summer rut, or from natural causes such as disease, starvation or injury.

Only time will tell if Yellowstone's wolves - especially Mollie's pack - continue to adapt until they're more efficient bison killers, or if they foster a bigger genetic subculture of wolves better-suited to killing bison. One thing is already clear, though: The park's wolves quickly dispelled researcher's predictions that it would take several years for wolves to learn to kill bison, their most formidable prey. The first documented wolf kill of a bison occurred 25 months after wolves were released.

Members of the Mollie's pack surround a bison in this February 2005 photograph. The wolves try to harass the bison into deeper snow, where the bison are less of a threat and easier to attack. Bison that stand their ground typically aren't attacked.

Wolves from the Mollie's pack trail bison in Yellowstone National Park in March 2007. The pack lives in the Pelican Valley in the east-central portion of the park. Elk migrate out of the region in winter, leaving bison as the pack's only large prey. Consequently, the wolves have had to adapt to killing bison.

A grizzly sow chases wolves from the Mollie's pack away from a bull elk that was killed in a stream in August 2005. Grizzlies often take over wolf kills.

A grizzly bear, left, sits atop a carcass in Yellowstone National Park in late April 2007 as a Mollie's pack wolf rests nearby. Grizzly bears usurp about 80 percent of the Mollie's pack kills in Pelican Valley between March and October, researchers have found.
© Copyright 2020 Billings Gazette, 401 N Broadway Billings, MT | Terms of Use | Privacy Policy
Powered by BLOX Content Management System from TownNews.com.
You don't have any notifications.