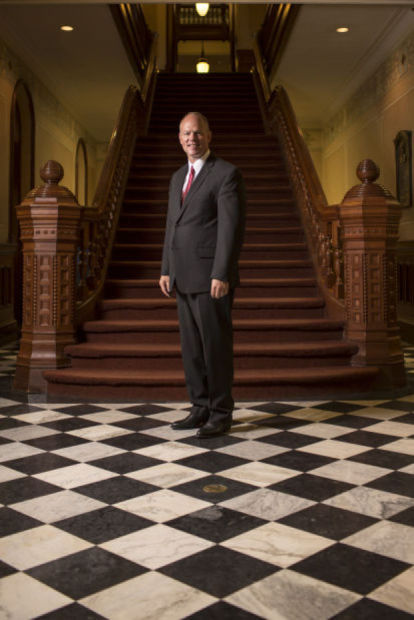 Gov. Matt Mead stands for a portrait Wednesday at the Wyoming Capitol in Cheyenne. 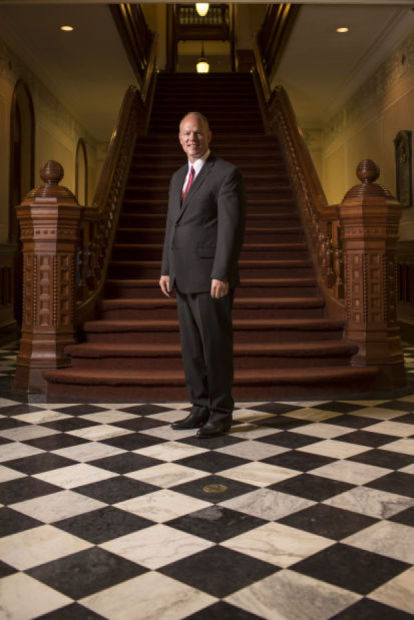 Gov. Matt Mead stands for a portrait at the Wyoming Capitol in Cheyenne. A panel overseeing renovation of the state Capitol has voted that the governor will be the only statewide elected official with an office in the building when the project is done.

Gov. Matt Mead stands for a portrait Wednesday at the Wyoming Capitol in Cheyenne.

Gov. Matt Mead stands for a portrait at the Wyoming Capitol in Cheyenne. A panel overseeing renovation of the state Capitol has voted that the governor will be the only statewide elected official with an office in the building when the project is done.

CHEYENNE, Wyo. — Wyoming Gov. Matt Mead believes marriage is between one man and one woman, not between same-sex couples.

While Mead recently told reporters at a news conference that he thinks the state law that defines marriage as between a man and a woman should be defended in a gay-marriage lawsuit, he didn’t expound on personal beliefs.

On Wednesday, during an interview with the Star-Tribune, he said his personal beliefs and religion influenced his opinion. Mead is an Episcopalian.

But Mead thinks gay couples married outside Wyoming should have access to the state courts.

“While I disagree with perhaps what other states have done in regards to gay marriage, it’s a reality in other states,” he said. “And those married couples will move to Wyoming. They are moving to Wyoming, and one of the hallmarks and strengths of Wyoming is our judicial system.

"And we need to make sure in Wyoming that those married gay couples know they have access to the courts, and then with that goes your dying spouse is on the deathbed and will you have access to say goodbye? Those types of things.”

“When I’ve met with him personally in the past, he has said the same thing to me,” Artery said. “What I would hope, though, is like so many other Americans, his views will evolve. I know a lot of the country is not where they need to be on this, but attitude and hearts and minds are changing very quickly. He doesn’t seem to me like he’s a close-minded person.”

Artery is also chairman of the gay-rights group Wyoming Equality, which sued Mead and other state officials in First District Court in Cheyenne last month to allow same-sex couples to marry.

The parties have not appeared in court yet. Artery believes the case will ultimately be appealed to the Wyoming Supreme Court.

Artery is encouraged by Mead’s comments about gay married couples getting court access. But the governor needs to go further, he said.

“That has been the issue for us in the past, and that was one of the reasons why this lawsuit was filed is so we do have access to equality in the courts, and health care and benefits, and everything else heterosexual couples are afforded with a $15 marriage license,” he said.

Mead, a Republican, is up for re-election. The primary is Aug. 19, and he will face Superintendent of Public Instruction Cindy Hill and Cheyenne rancher and physician Taylor Haynes.

Hill did not reply to text and voice messages Friday about her views on gay marriage.

Haynes thinks it should be reserved for a man and woman.

“If you want the state to sanction your marriage, you have to meet the requirements that everybody else meets,” Haynes said.