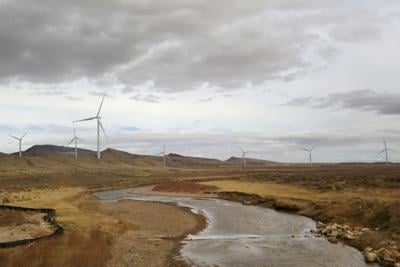 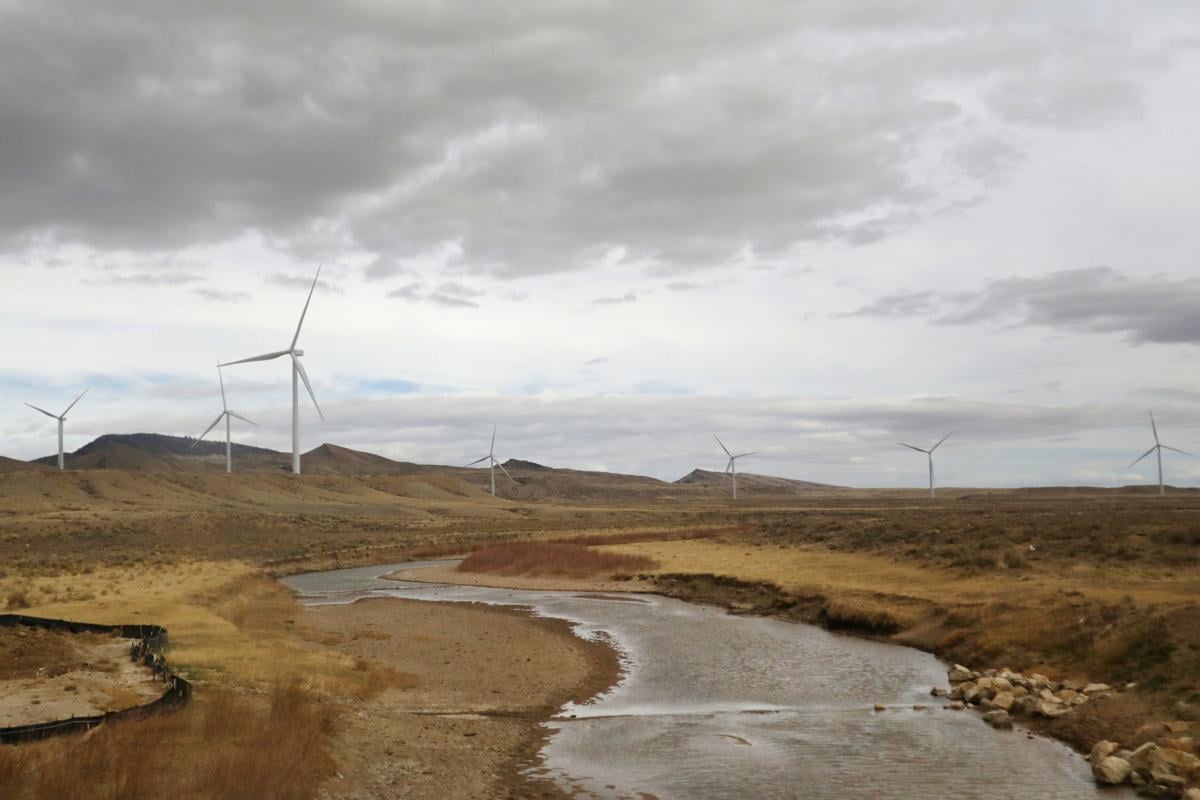 A stream winds through Rocky Mountain Power's Ekola Flats Wind Energy Project outside Medicine Bow where wind turbines are spread out across the landscape in October 2020. 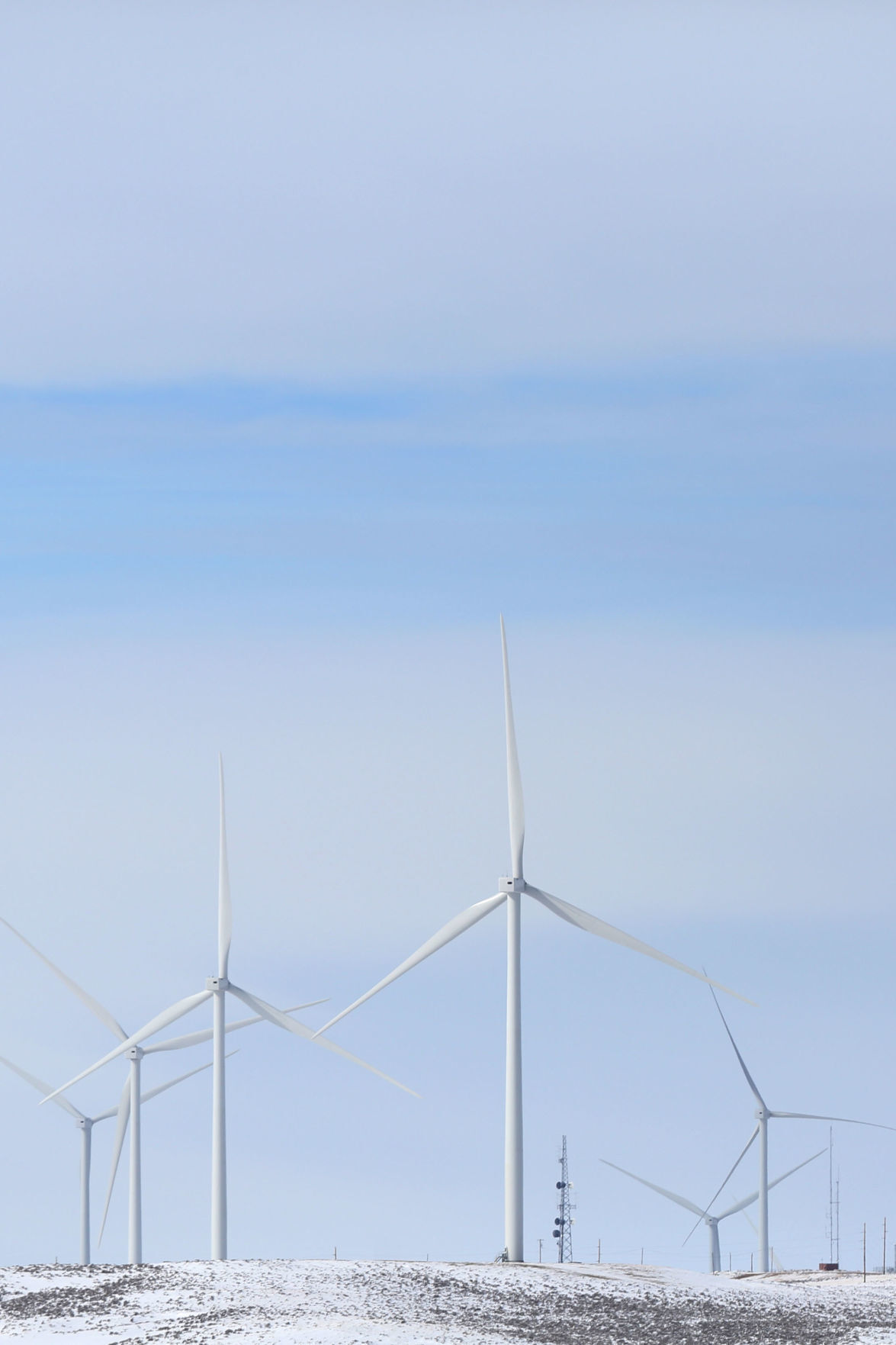 The wind energy sector in the U.S. shattered records in 2020, recording its biggest year yet in terms of new capacity added to the grid.

Last year, 16,913 megawatts of new wind power capacity was installed in the U.S. — an 85% increase compared to 2019, according to a report compiled by the American Clean Power Association. That amount of power is roughly equivalent to what 11 large coal plants can produce.

In 2020, the state installed 1,123 megawatts of wind power, nearly doubling its capacity.

When it comes to new wind capacity added in last year’s final quarter, Wyoming ranked second nationwide, after Texas, adding 895 megawatts of new capacity. A significant portion of the development was undertaken by Rocky Mountain Power, the state’s largest utility.

That said, energy experts have warned Wyoming shouldn’t take the growth in wind development for granted, or expect it to continue year after year. Wyoming has some of the nation’s best conditions for building wind energy. But some here remain skeptical about making the state an attractive location for wind development in the coming years.

So what’s the next chapter for wind energy in Wyoming?

To Jonathan Naughton, a University of Wyoming engineer specializing in wind energy, the key to future growth of wind energy in Wyoming is whether the state can maintain a stable business environment for developers, especially in the competitive Mountain West region.

“We really need to figure out how much we want to develop and then come up with policy that supports that,” he explained. “We need to decide, and then we need to go for it. Because if we don’t, it’s just going to be built elsewhere.”

“If we want to do this, we have to send a clear message, which I don’t think we’re doing right now,” Naughton added.

Wyoming may have prime conditions for converting wind into electricity, but so do plenty of other states in the region, he and other wind energy experts said. What’s more, technology has advanced to the point that wind turbines can now perform just as well in environments with lower quality wind.

The Industrial Siting Council, the regulatory board in charge of reviewing big wind project applications in Wyoming, has not received a new proposal for a wind project since 2019.

Though the utility Rocky Mountain Power has big plans for expanding wind and associated infrastructure in the coming years, other utilities, like Black Hills Energy, do not have near-term plans for building or buying renewable energy, according to a spokeswoman.

As a majority of Wyoming counties reported dramatic declines in tax revenue last year during the pandemic, sales and use taxes poured into Carbon County, largely thanks to wind projects.

In the third quarter of 2020, Carbon County’s taxable sales jumped by 95%, compared to the year before. The increase in revenue could be traced back to the wind projects springing up across the county. In addition to the sales and use taxes, wind developers also pay property and electricity generation taxes.

Though Naughton is also quick to note that the revenues collected from wind energy will be nowhere near what coal once provided, a chance to diversify Wyoming’s economy shouldn’t be quickly tossed aside, he said.

“The sales and the property taxes do help out local economies,” the engineer said. “That is going to be important as the state government is not going to be able to do that as much. Letting those local communities control their own destinies is important.”

If Wyoming showed a willingness to build out wind, he wonders what that could attract in the way of other industries. Companies may want to take advantage of inexpensive, reliable and clean electricity, he noted.

Rikki Seguin is the executive director of Interwest Energy Alliance, a regional trade association for utility-scale renewable energy developers and manufacturers working across in the region, including in Wyoming.

“Business likes stability,” Seguin said. “But each year, literally, we are faced with a new bill in the Wyoming Legislature to modify the tax treatment on renewables. The annual discussion at the Wyoming Legislature about renewable energy taxation creates uncertainty, and that type of uncertainty really does not create a business environment that companies want to invest in.”

In the past legislative session, lawmakers debated several bills that would have increased taxes for utility-scale wind farms.

The bundle of proposed legislation didn’t pass, but the recurring conversation is enough to chill some developers thinking about coming to Wyoming, Seguin said.

Since May 2016, Wyoming legislative committees have considered increasing the tax burden on wind energy 18 separate times.

“What is unique to Wyoming is the way that renewables are currently taxed in the region,” Seguin said.

Wyoming levies a $1 per megawatt hour generation tax on electricity, property taxes, and sales and use taxes.

“There is no other state in the West that does that,” Seguin remarked. “That automatically puts Wyoming projects in a less competitive light when it comes to building renewable energy facilities.”

According to Ryan Fitzpatrick, a representative of renewable energy firm NextEra Energy, more taxes would likely result in Wyoming receiving less revenue in the long term.

“Increasing taxes now, during a time when several neighboring states with similar wind and superior solar resources are competing for renewable projects, certainly risks Wyoming losing out on hundreds of millions of dollars in future tax revenue,” Fitzpatrick told lawmakers during a committee meeting on March 4.

“For every incremental increase that we add to solar and wind projects, it just makes it less competitive,” he said.

Still, other lawmakers and Wyoming residents consider the costs of wind energy — like potential obstructions to viewsheds or disruption of wildlife — an important factor to consider before swinging the state’s doors wide open for wind development.

The bottom line to Naughton, the UW engineer, is that Wyoming just needs to decide. The window for Wyoming to capitalize on potential wind development will not last forever, he cautioned.

Powerful advancements in offshore wind technology — think massive wind turbines on floating platforms out in the ocean — could shift developers’ attention away from the Great Plains region to the coasts in the near future.

“Offshore is ramping up quickly,” Naughton said, “But there are still a lot of unknowns.”

Talen Energy, in a joint venture with Pattern Energy, is pursuing lease agreements for a wind farm in a targeted project area of roughly 14 square miles in Rosebud and Treasure counties.

Only three power plants buying Montana coal now indicate they could still be burning coal beyond 2030.

A stream winds through Rocky Mountain Power's Ekola Flats Wind Energy Project outside Medicine Bow where wind turbines are spread out across the landscape in October 2020.