The destruction of a 90-year-old bridge across the Yellowstone River is nearing completion, and the river could soon be reopened to boat traffic.

The bridge in Stillwater County is about six miles east of Reed Point and parallels a railroad bridge, hence the “Twin Bridges” nickname for the area.

The river has been closed to boaters above and below the bridge since January out of concern that the structure might collapse. An inspection of the bridge by the Montana Department of Transportation had revealed one of the bridge’s main concrete piers in the river had a hole in it and could fail at any time.

Given the danger of collapse during spring runoff, the destruction project was fast-tracked, with work beginning near the end of March.

Sletten Construction was awarded the contract to tear the old bridge down. Blowing up the structure with explosives was initially considered, but rejected because of the difficulty of containing the debris, according to Tony Ewalt, senior vice-president at Sletten.

To facilitate tearing down the bridge, the company first built a new bridge alongside that could hold two 225,000-pound cranes capable of lifting 120 tons, Ewalt said. Although barges are sometimes used, the current in the channel was too swift to secure them.

Construction of the work bridge soon ran into problems when the pipes being driven into the riverbed hit bedrock.

"It was such a fast project we didn't have a lot of good data to provide them," Johnson said.

That meant Sletten's engineers had to quickly redesign the structure with more supports since the temporary piers could not be sunk as deep as originally conceived.

“It’s engineered to the equipment we’ll have on it, so it’s a pretty in-depth process,” Ewalt said.

Then the crew had to stabilize the old bridge’s pier. To do that a temporary coffer dam was built around the abutment with steel sheet piling. Concrete was poured into and around the old pier to stabilize it while workers used heavy equipment to cut up the old bridge’s decking piece by piece. Ewalt said they removed about 5 million pounds of concrete decking.

Three steel trusses stretched across the bridge, each weighing 190,000 pounds. Their removal required having both cranes on the work bridge at the same time. The center span was cut in half.

With that done, the workers began tearing out the old piers using an excavator. Concern rose as the water level climbed 3.5 feet in one weekend as warm weather prompted spring runoff, but the coffer dams weren’t breached.

Removal of the old bridge left a large hole on the bank of the river, so the engineers are calculating how much riprap to place into the hole to armor the stream bank.

While that was being done, the crews demolished the old ranch buildings on the north shore of the river and hauled the scrap out.

The buildings were part of the 580-acre Deeny ranch, which was purchased by the Montana Department of Transportation in 2019 for $2.8 million. The agency bought the ranch because that was cheaper than fixing the bridge, which would have cost an estimated $4.5 million to $6 million. The bridge was the only access point to the land.

MDT has offered the land to the Montana Department of Natural Resources and Conservation. If the DNRC chooses not to buy the property, it will be sold at auction.

As part of the land purchase, the Montana Department of Fish, Wildlife & Parks has acquired two islands upstream from the ranch as a new primitive fishing access site that can only be reached by boat. The 45 acres were purchased for $54,000 with funds from the Department of Justice’s Natural Resource Damage Program’s $9.5 million settlement with the ExxonMobil Pipeline Co. due to the 2011 oil spill into the Yellowstone River at Laurel.

FWP is also prepared to build a new boat ramp at the old bridge site on the south shore of the Yellowstone River. The access point would be eight miles downstream from the Indian Fort FAS near Reed Point and five miles upstream from Holmgren FAS.

Although Sletten’s contract for the old bridge’s removal runs through October, Ewalt said the crew hoped to have the work bridge removed so the river could be reopened to boats by early to mid-June.

“It was a fast operation,” he said. “We worked two full shifts” to ensure the old bridge was torn down before high spring runoff might force it to collapse.

“Fortunately, we have a specialty bridge crew,” Ewalt continued. “They know their way around the business, working with these big loads and big crane picks.”

He credited project manager Mike Anderson and superintendents Dusty Varty and Jason Plouffe for executing the work so quickly and professionally.

“It was a quick, risky job but our team took care of it,” Ewalt said.

A MDT webcam set up at the work site gives a time-lapse and live view of the work going on at the river. The cam can be found online at http://www.montanadotwebcams.com/silver.htm.

Money for the land would come from $9.5 million in settlement funds paid by the ExxonMobil Pipeline Co. to the state of Montana following the 2011 Yellowstone River oil spill near Laurel.

Bridges of Yellowstone and Carbon counties get the spotlight this summer

A live webcam, at mdt.mt.gov/pubinvolve/billingsbypass/camera.shtml, allows the public to view "real-time construction progress" of the bridge as it goes up this spring and summer.

The secret is the cranes.

A bridge on 56th Street West at the intersection of Danford Road will be closed to traffic Thursday and Friday for an emergency repair.

Section of Yellowstone River reopens to boaters after bridge torn down

A stretch of the Yellowstone River east of Reed Point, which has been closed to boat traffic since January, will reopen Wednesday in time for …

Water levels at most Bureau of Reclamation-managed reservoirs in Eastern Montana are near average for this time of year. 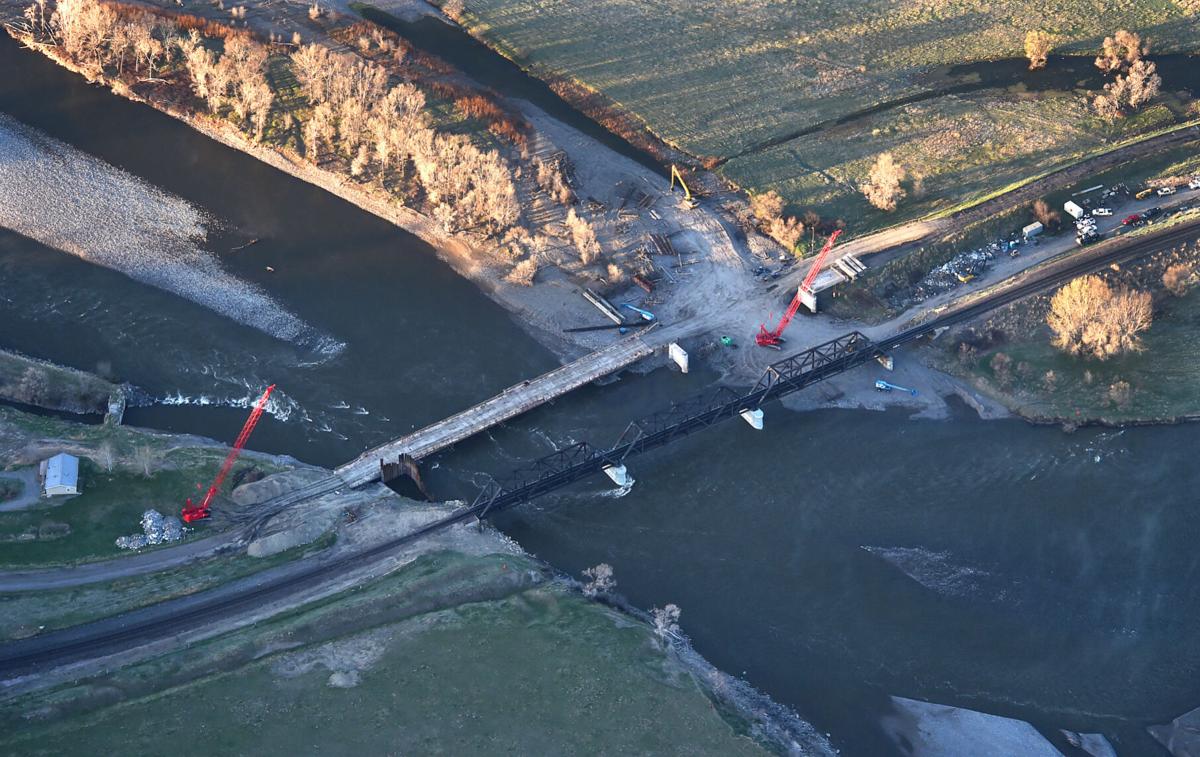 An aerial view shows the work bridge erected on Twin Bridges Road that traverses the Yellowstone River. The bridge was built to tear down a 90-year-old bridge that was failing. 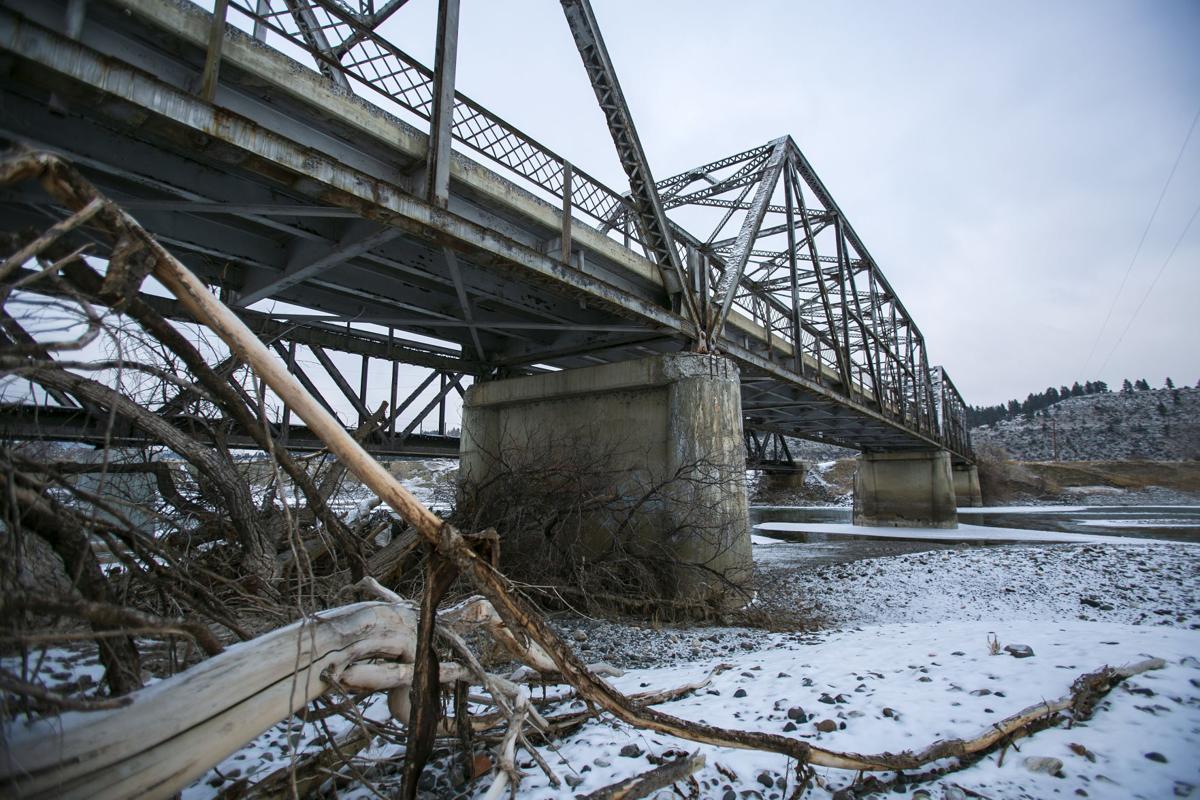 The bridge on Twin Bridges Road that traverses the Yellowstone River has been torn down after it was discovered one of the bridge piers was failing. 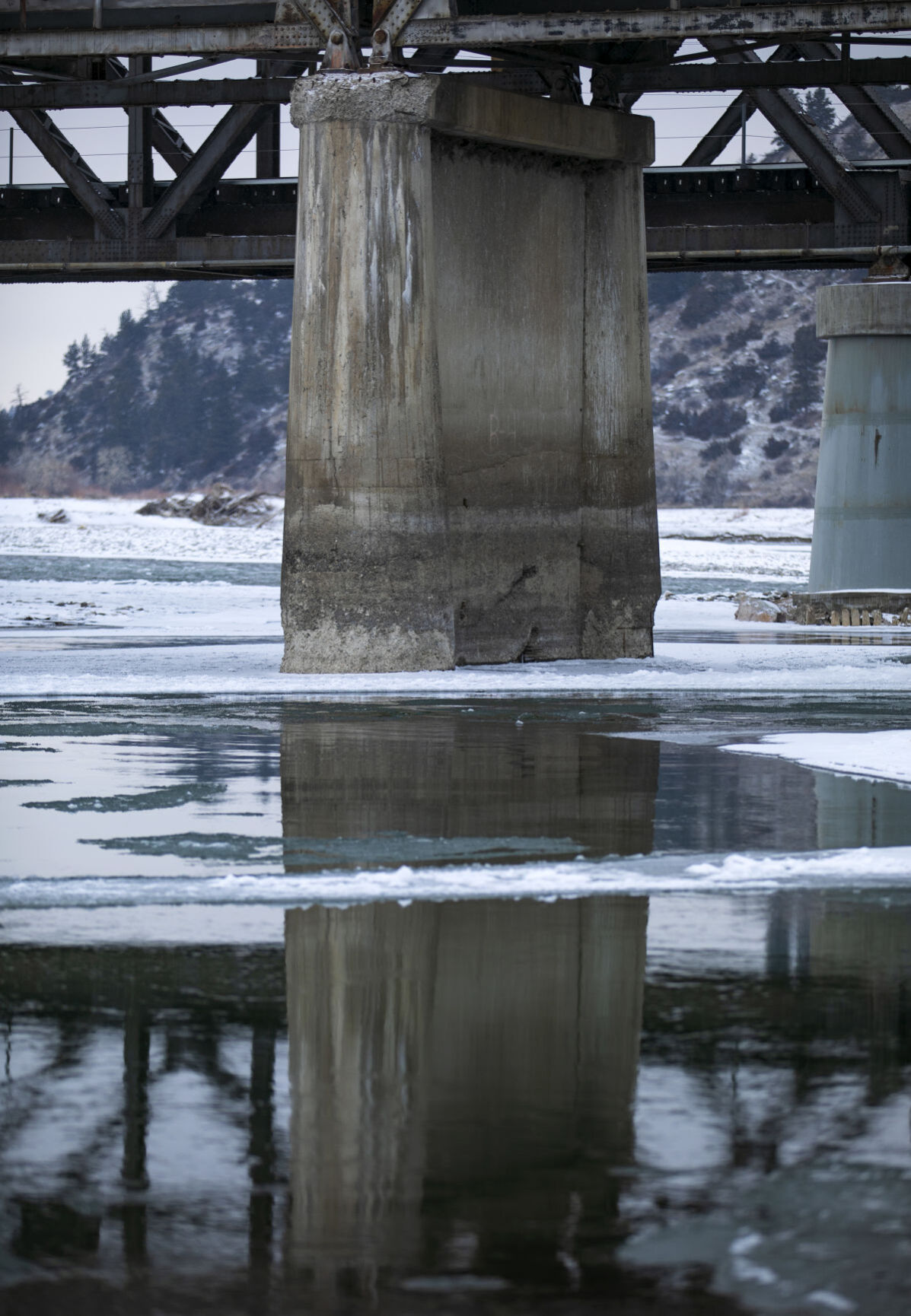 The problematic bridge pier on Twin Bridges Road is seen surrounded by the Yellowstone River. Underwater inspectors discovered that half of the pier’s material has been eroded away. 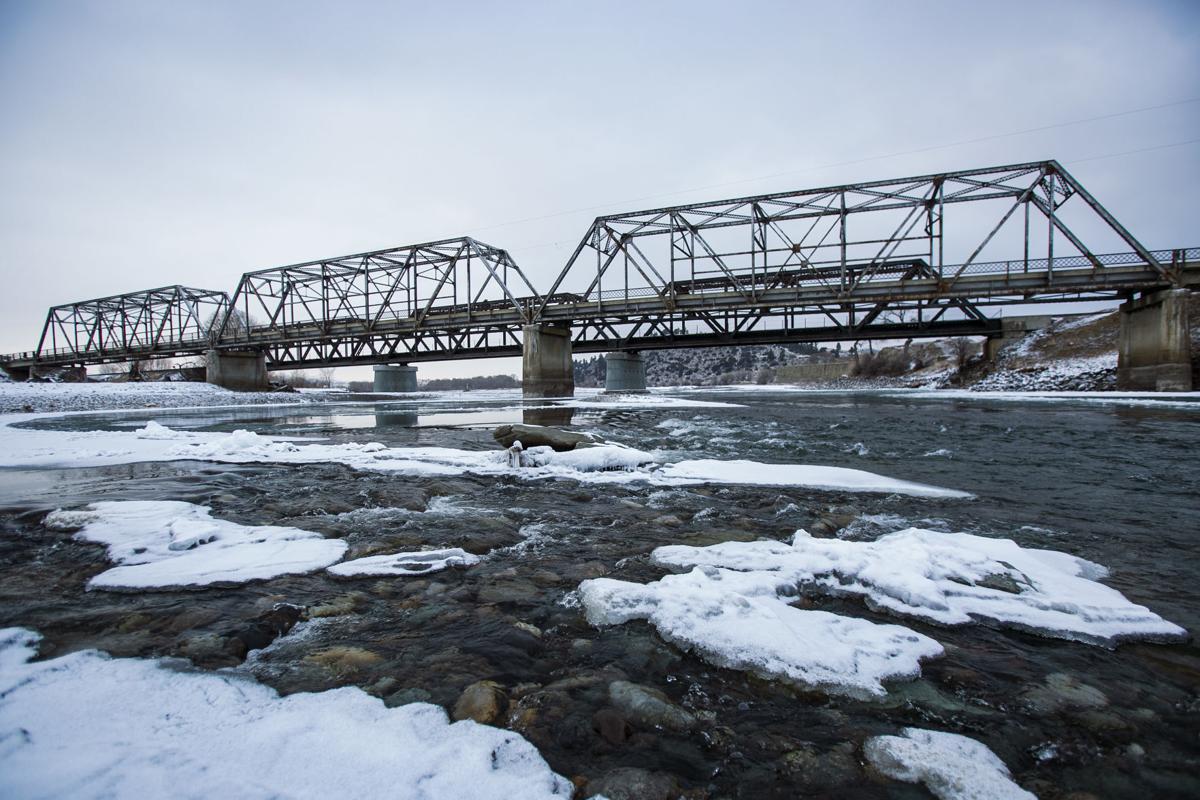 The bridge on Twin Bridges Road that traverses the Yellowstone River is now gone. 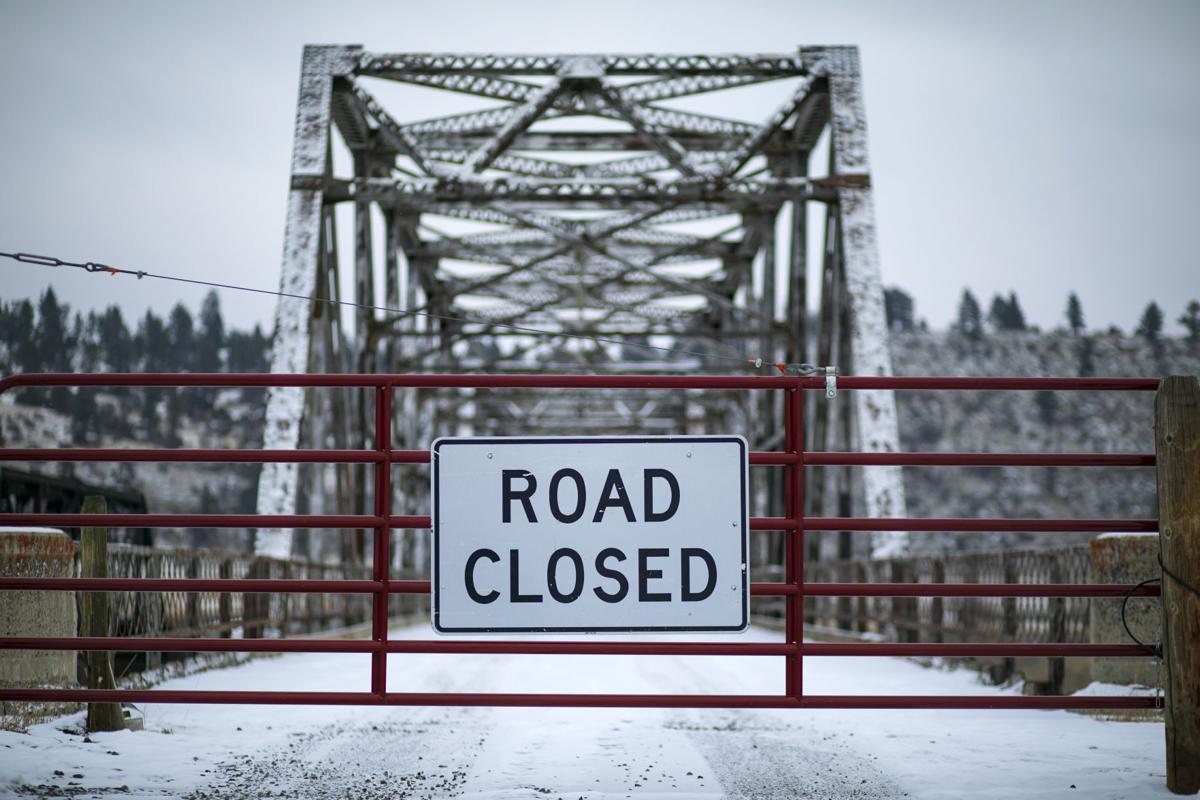 In January the bridge on Twin Bridges Road that traverses the Yellowstone River was closed.