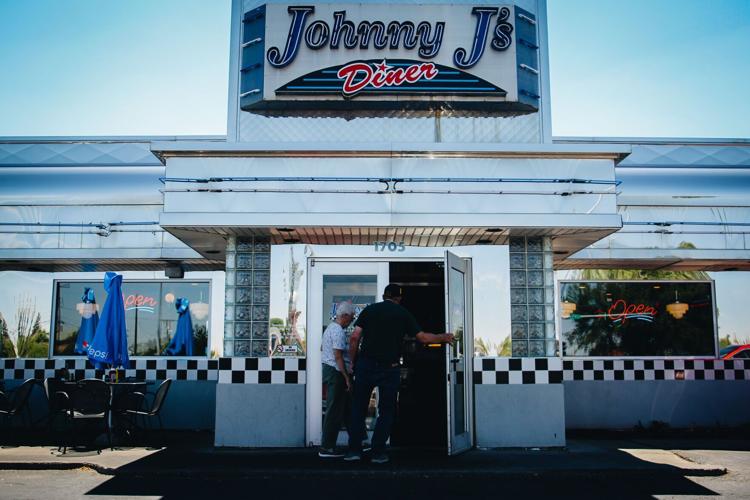 Customers walk into Johnny J's Diner for lunch Thursday in Casper. The restaurant has been a staple in Casper for decades. 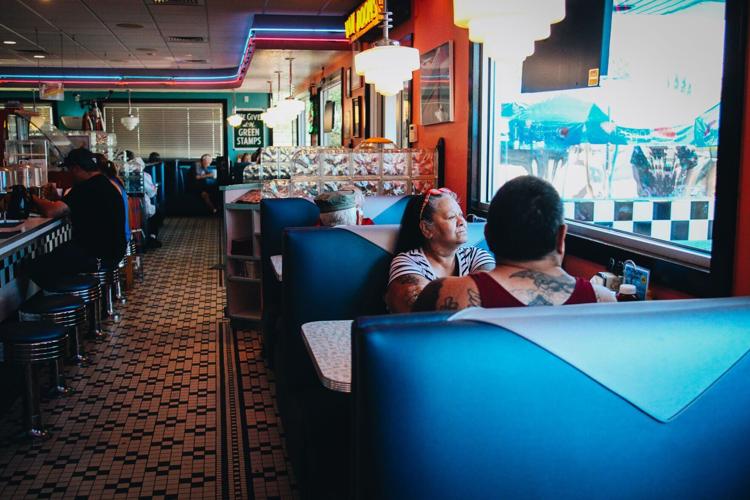 A woman looks out the window of Johnny J’s Diner on Thursday in Casper.

Visible through the glass doors, even when just driving past the silver chromium building on Second Street, a large illuminated clock with the words “Johnny J’s Diner” lit up and curving around the numbers. The diner doesn’t open until 6:30 a.m., but when the hands of the clock point to 6:15, waitress Nicole Moyer said there’s often cars sitting in the parking lot.

All waiting for the sign with neon cursive lettering reading “open,” to flip on.

“We have a lot of our regulars, like our coffee drinkers usually sit here and it’s an all day kind of thing,” Moyer, who’s been with the diner for two years now, said. “A lot of times in the mornings, when we set up, we’ll set up certain sections that people always sit at and that way they already have their coffees and everything ready.”

The diner has been open at its current location at 1705 E. Second St. since the early 2000s, and when asked by anyone who frequents the diner what’s changed since then, they’ll tell you, “Not much.”

After entering the doors, guests are greeted with a black and white checkered counter with six blue stools sitting in front, the two swinging doors leading to the kitchen on both sides. Filled to the brim with 50s signs and décor, the diner looks similar to a scene that would be found in a sitcom.

If that were the case, the frequent visitors of the diner would fit the cast.

“We know them all by name,” she said. “Half the time we fight over who wants to take them.”

Sure enough, a man wearing a patterned shirt covered in flamingos took a stool at the counter on the opposite side. Tom Loepp, a local painter, who Moyer said was one of the diner’s regulars.

A different waitress across from him made a face, hinting Leopp visited much more often.

Most, if not all of the waitresses, know Leopp by name. Lightly poking fun at each other is a regular part of the relationship.

“See that one right there,” Leopp said, nodding towards a server standing on the opposite side of the counter. “She’s the worst, she doesn’t care. You say ‘What’s good here?’ and you don’t want to hear what she says.”

“Tom stop it,” she joked back, shaking her head.

When handed one of the plastic menus, he began listing off what to eat, what to skip and occasionally, what he hadn’t tried yet. He recommends the Cobb salad and anything with the chicken.

The seat of choice for Leopp is always the counter, near the register and glass containers displaying pies and other baked goods. The reason is pretty simple he said: it’s where everything is happening.

“Everybody’s traveling through here. If you sit over there,” he pointed to a table in the corner. “You might be isolated. I usually go places by myself, not all the time, but you can hang out and talk with all the people that work here. But now I’m here and all these people do is give me a hard time.’’

Across the diner, in a window booth on the left side of the restaurant, two more regulars — Rick Ullery and his daughter Siri Ullery.

After discussing just how long Rick has owned his dental practice located three blocks from the diner, and just how old Siri actually is, the pair concluded that Rick has visited the diner almost every day over the past 21 years.

“The waitresses know him,” Siri added. “They’ll bring him out the biggest thing of ice tea that they can every single time… there used to be bigger glasses and they basically just gave him a giant pitcher with a straw for a while.”

Other than ice tea, recommended by Rick, the guacamole bacon burger, the Frankie Avalon. He ate it almost every day for eight years and has since switched to salads and the club sandwich. He still gets it as a treat sometimes. Siri said she’d also recommend the coconut cream pie, and that it’s her favorite pie, possibly ever.

The duo’s order changes from day to day. However, the diner Rick said, hasn’t changed much.

“I’ve been here longer than any waitress,” he laughed. “The food’s always good, I like the music and the décor is relaxing. It doesn’t change a lot… the only thing I don’t know is the table numbers, I still need to learn them.”

He called over a nearby waitress, by name, to ask her about the sequence.

“So the corner’s one,” she started, pointing to the far booth in the corner. “Then two is here, three, four, five, six-”

The waitress laughed, finished explaining the order of tables and moved to help her next table.

Sitting a few booths down from the entrance, Shannon Carranza with three of her kids, David, Alejandro and Jullian Carranza.

The recommendation of the table is the vanilla coke, a drink that pairs well with french fries, Shannon said. Both items from the menu sat on the table of the booth, alongside a half eaten kid portion of spaghetti and two boats, empty, other than a leftover mix of mustard and ketchup.

Growing up in Casper, Shannon said she used to get a similar order when she visited the diner as a kid.

“We used to come here every weekend,” she added. “I was with a group of church friends and after we played volleyball down the street at the rec center, we would come down here and get a bite to eat.”

Now with kids of her own, Shannon says the diner has barely changed at all since she was around their age. The décor, the music, the look just stays consistent.

“Like everything tastes exactly the same,” she said, gesturing towards the food left on the table.

The trip to the restaurant isn’t one made very often anymore, but it’s still a favorite of her and her kids she said.

“Johnny J’s is a favorite of mine since I was a kid,” Shannon added. “And still, the place is friendly and has a good menu. And the shakes of course, a really big hit for the kids as well.”

In a few hours, most of the lunch crew will finish up their food and start heading out. It will slow for a bit, then the dinner crowd will make their entrance, Moyer said. She’ll leave around 3 p.m., but the diner won’t close its doors until 9 p.m.

“Everybody loves a diner,” she said.

The information indicated that the transmission of child pornography was from an account that was connected to the school and to Gayo’s residence.

As veteran boaters have returned to explore the Stillwater River following historic June flooding, they’ve been amazed at what they are finding — one famous wave caused by a rock ledge named Beartooth Drop has been filled in, a new series of large waves has appeared just upstream.

'Yellowstone' seeks extras for filming in Helena on Aug. 24

The television show "Yellowstone" put out an online open casting call on Monday, seeking local talent to work as extras for filming in Helena on Aug. 24.

In the midst of temperatures reaching the mid-90s, the 82nd annual Sturgis Motorcycle Rally began at full throttle on Friday afternoon.

A fall victim who died in Glacier National Park on July 25 has been identified as Bob Biondi of Lutz, Florida.

Customers walk into Johnny J's Diner for lunch Thursday in Casper. The restaurant has been a staple in Casper for decades.

A woman looks out the window of Johnny J’s Diner on Thursday in Casper.