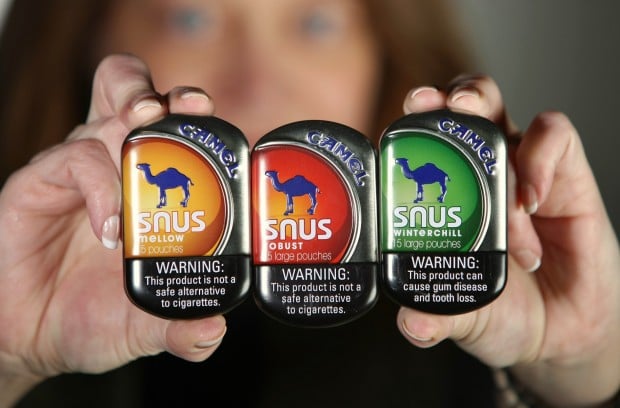 Tammy Perkins, a Rimrock Foundation addiction counselor at Senior High School, holds varied flavors of tobacco pouches that are becoming popular at schools. The popular tobacco product comes in flavors such as spearmint and peppermint, which are attractive to teens. 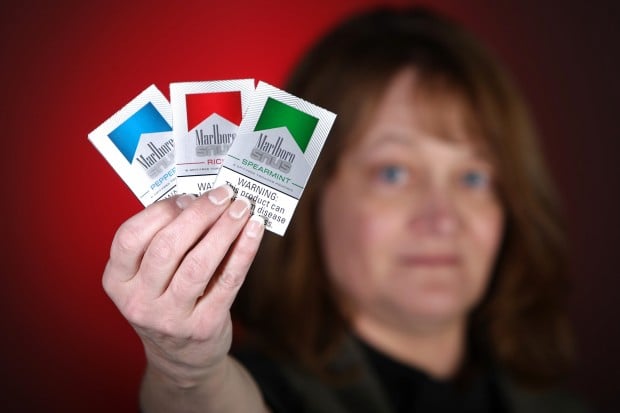 Tammy Perkins, a Rimrock Foundation addiction counselor at Senior High School, holds flavors of tobacco pouches that are becoming popular at schools. The tobacco comes in flavors such as spearmint and peppermint that are appealing to teens. 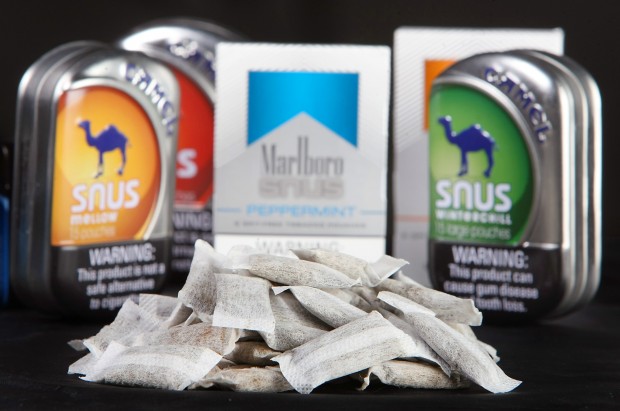 Snus features tiny pouches filled with tobacco. The pouches are so small that they can discreetly fit under a person's lip or even between his toes to fulfill the nicotine craving. 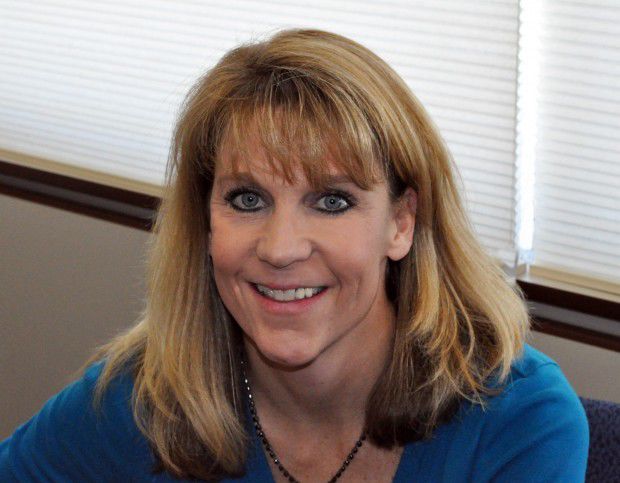 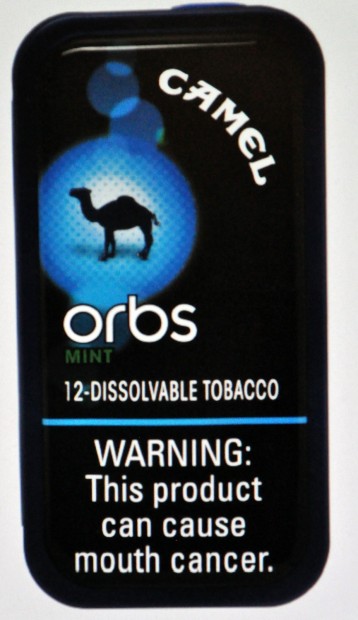 A Skyview High School wrestler was caught in school this month — one day before the state wrestling tournament — with a $4.55 can of Copenhagen. The penalty resulting from the ill-conceived decision was priceless.

He was suspended from school for three days and prohibited from participating in the state tournament. The student athlete also was required, per school policy, to complete a drug and alcohol class, according to Skyview wrestling coach Rich Malia.

"It was pretty traumatic for both him and his parents," Malia said.

The incident underscores the ongoing and growing issue of tobacco use among youth in Montana. Montana males, both adults and kids, are using smokeless tobacco at alarming rates — about twice the national average, according to the Campaign for Tobacco Free Kids.

The popularity of smokeless tobacco coincides with the tobacco industry's creation of an array of smokeless-tobacco products in response to the nation's move toward clean indoor air policies and laws. The products, such as Snus, are made even more appealing by fun, bright, colorful packages and candylike flavors such as spearmint, peppermint and winterchill. The products are sold throughout Montana, with the tobacco industry spending an average of $34 per Montanan per year, according to the Montana Tobacco Use Prevention Program.

The spike in smokeless-tobacco use in Montana comes when getting a nicotine fix is more convenient and less noticeable than ever. No longer is smokeless tobacco associated with a bulging mouthful of intense-tasting, wet, smelly, brown crud and drooling spit.

The current product of choice among youth is Snus, a tiny pouch filled with tobacco that kids can discretely tuck under their lip. Gone is the telltale bulge in the check and the tobacco juice. Snus curbs the craving as nicotine absorbs into the gums. Kids like it because it is not easily detected and they can stay buzzed 24/7.

It turns out that Snus is no longer just for the cheek and lip. The latest craze to capitalize on the nicotine punch of the pouches is to use it not with the mouth but with the feet. There is a growing trend among high school kids of cutting slits between their toes and tucking a pouch there. The nicotine absorbs directly into the blood, giving them a nicotine high at school or during practice. No one is the wiser.

The trend has caught the attention of the Centers for Disease Control and Prevention, the Montana Department of Health and Human Services and an addiction counselor for Billings School District 2.

"The kids are telling me they put it between toes, put on their shoes and socks and no one can detect it," said Tammy Perkins, a Rimrock Foundation addiction counselor at Senior High. "There's no big ol' pouch in their mouth." Perkins said the method is particularly popular among student athletes.

Stacy Campbell, section supervisor for Healthy Lifestyles with the Montana Department of Health and Human Services, tells a similar story. "I don't think it's a rampant problem in Montana by any stretch of the imagination. We've heard of it. There are kids in Montana doing it, but usage itself is a huge issue. However they absorb it, to me, isn't the issue. The issue is the usage."

Snus, considered a "starter kit" to cigarette smoking, has been available in Montana for about six years but has "definitely increased greatly" over the past five years, Campbell said.

With tobacco use among high school youth already well-documented, state health officials are bracing for the next wave of tobacco products aimed at youth and putting parents and educators on notice. The products that are Montana-bound are Camel Sticks, Camel Strips and Camel Orbs.

The smokeless-tobacco sticks, sold in matchbook-like packs under the brand names Marlboro and Skoal, are aimed at adult smokers and snuff users who want a smokeless, spit-free alternative. The sticks are coated with finely milled tobacco and come in different flavors such as "cool mint." They carry the same potential health risks as other tobacco products and bear similar warnings.

The strips are a film strip for the tongue and also are made from finely ground, flavored tobacco. The products melt in the mouth within three to 30 minutes.

Orbs look similar to a Tic Tac. They, too, are made of finely ground tobacco with mint or cinnamon favoring. They are loaded with nicotine and dissolve in the mouth, like a breath mint. They can poison children. Given the candylike quality, youth are easily and readily attracted to them, Campbell said.

The Sticks, Strips and Orbs were test-marketed in a few locations and re-released in March 2011. They were recently pulled from the market to redesign the packaging. The new package just recently hit Colorado, so it won't be long before the products are in Montana stores, Campbell said.

"Is there an uptick in kids using new products?" Campbell asked rhetorically. "Oh, yeah, across the board. The issue is that the tobacco companies know that so they manufacture it in flavors kids will like. Do you seriously think a 50-year-old person that smokes is going to go in and buy those? No!"

Since much of the tobacco advertising is now restricted by law, cigarette companies focus on retail marketing and display advertising, with the tobacco industry paying retailers for product placement near candy and at levels viewed by children, Campbell said.

The tobacco industry outspends Montana's tobacco prevention program by a margin of four to one, annually spending $33 million marketing tobacco in Montana.

Smokeless-tobacco products can contain up to four times as much nicotine as in a cigarette, Campbell said.

"The addiction is created so quickly, it doesn't take much," she said. "These are definitely starter products. They taste good. They're less harsh and less intense. If a kid puts a cherry-flavored little pouch of tobacco in their lip, it won't be as abrasive. It does become addictive."

add copy, keywords and any photos we get. Stacy Campbell already attached.

After an extensive search, authorities found the body of 2-year-old Athian Rivera in a dumpster near where he went missing.

Laurel man again gets 80 years in prison for slashing death

A 69-year-old Laurel man received the same 80-year prison sentence on Friday that he did after his first trial in 2015 for killing a man during a knife attack.

The boyfriend of a Wyoming woman whose 2-year-old son was found dead in an apartment complex dumpster has been arrested, police said Tuesday.

In his 2016 campaign, the governor called on his opponent to sell the state's aircraft.

Gov. Greg Gianforte got a firsthand look Friday at the material that will go unused and talked with the people who stand to lose income and ta…

Judge rules for Culbertson in dispute with Knudsen family

A District Court judge has ruled in favor of the town of Culbertson and the local American Legion in a lawsuit against the family of Attorney General Austin Knudsen in a longtime dispute over an easement to a 40-acre park.

Police suspect the pair were involved in stealing a black GMC Yukon, later found in Cheyenne. After the shootout, the two were taken to a hospital, where Hailey Stainbrook died.

A New York-based medical school is looking at a new site in Great Falls.

Montana reported another two deaths due to COVID-19 on Saturday, as well as 288 new cases.

Tammy Perkins, a Rimrock Foundation addiction counselor at Senior High School, holds varied flavors of tobacco pouches that are becoming popular at schools. The popular tobacco product comes in flavors such as spearmint and peppermint, which are attractive to teens.

Tammy Perkins, a Rimrock Foundation addiction counselor at Senior High School, holds flavors of tobacco pouches that are becoming popular at schools. The tobacco comes in flavors such as spearmint and peppermint that are appealing to teens.

Snus features tiny pouches filled with tobacco. The pouches are so small that they can discreetly fit under a person's lip or even between his toes to fulfill the nicotine craving.