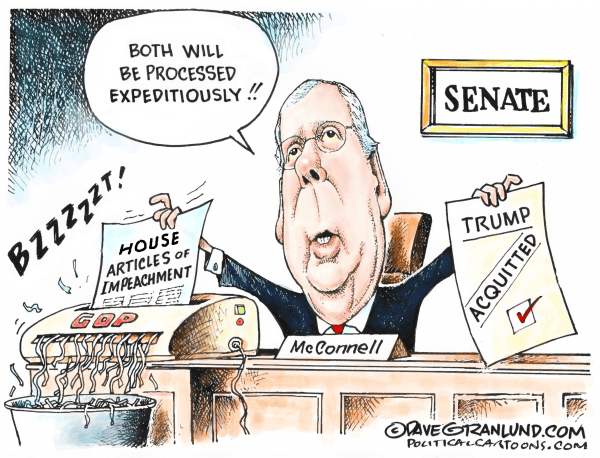 As I cringe while watching GOP Senate Leader Mitch McConnell, my mind turns to revered Montana Sen. Mike Mansfield, who served as Senate majority leader longer than any other person in U.S. history. The impeachment of a president puts great stresses on the institutions of our constitutional democracy, stresses that call for integrity and commitment to the nation from our elected leaders. All of them.

Faced with taking an impeachment-specific oath to “do impartial justice according to the Constitution and laws, so help me God,” McConnell is daily proclaiming that he will not be impartial, proudly stating: "I'm not an impartial juror." Contrary to that oath, McConnell has pledged to run the impeachment trial in "total coordination with the White House.”

McConnell’s shameful approach stands in great contrast to the way Mike Mansfield operated as Senate leader. In a marvelous tribute to Mansfield, Montana author James Grady noted that “Mike reasoned that fairness and respect are the best tactics and strategies to make democracy feasible.” He recalled that when Mansfield “caught a Democratic colleague breaking a promise to a Republican, Mike used the rules of the Senate to give the Republican his promised fair shot. Mike insisted that senators act like they belonged to ‘the world’s greatest deliberative body.’ ”

Even when dealing with Richard Nixon’s impeachment-related Watergate improprieties, Mansfield insisted that neither Nixon fans nor Nixon haters could serve on a special Senate committee investigating the unfolding sins of the Nixon era. Mike stood for the co-equal constitutional status of Congress but also for even-handed impartial justice.

To directly quote Montana’s Mike, the way the Senate got things done was “by accommodation, by respect for one another, by mutual restraint” Mike lived his leadership by personally helping things along, doing his “best to be courteous, decent, and understanding of others.”

Contrast that with McConnell, who bends rules to absolute partisan advantage. After his unprecedented refusal to allow Republican senators to even meet with President Obama’s Supreme Court nominee Merrick Garland, McConnell said "One of my proudest moments was when I looked Barack Obama in the eye and I said, 'Mr. President, you will not fill the Supreme Court vacancy.'"

McConnell called his shameful and partisan decision to block the Garland nomination as "the most consequential decision I've made in my entire public career". He was most proud to have limited President Obama to the fewest judicial nominees confirmed in the final two years of a presidency since 1951–52. Can you imagine Mansfield sullying his office and sacrificing his honor in such a way? No honorable person of either party should condone such acts, done in the name of political power.

It’s no wonder that when recently lunching with several good friends I answered “Mike Mansfield” to the question “Is there any political-governmental leader you know who stands out the most, who exhibits what we really mean by leadership?”

Grady recalled Mansfield as a “complex man [whose] staff often found him sitting in his office alone — thinking, actually thinking, as he smoked a pipe.” Mansfield loved to read and favored the style of politics championed by the Chinese philosopher Lao Tzu, who preached subtlety instead of Machiavelli‘s knife. “He met regularly with Senate Republicans, listened far more than he talked, gave his word and kept it... Mike believed that all Americans have a civic duty to act civilly.”

From his understated gravestone at Arlington Cemetery, Mansfield sees a McConnell dominated “Washington where money rules politics, [where] our TV airwaves and the Internet” are dominated by pundits for whom “name-calling, snappy one-liners and smears disguised as questions substitute for journalism and reasoned debate.” Talking heads, pretending to be neutral, cheer lead hatred and fear, creating “an America where being famous is more rewarded than being of service.”

Leaders like Mike Mansfield made America great and we can do so again if only we find the courage to be honorable and require that in our leaders. To hold everyone accountable for their acts but to do so in a respectable way. To find strength in dignity, not in anger, and to remember the American dream belongs to us all.

“Where have you gone Joe DiMaggio, a nation turns its lonely eyes to you.”

Evan Barrett lives in Butte after retiring from a career in Montana economic development, government, politics and education. He continues to write columns and commentaries and occasionally teaches Montana history.

When Mansfield “caught a Democratic colleague breaking a promise to a Republican, Mike used the rules of the Senate to give the Republican his promised fair shot. Mike insisted that senators act like they belonged to ‘the world’s greatest deliberative body.’ ”

Guest view: Get the facts on the coronavirus, COVID-19

In January, Chinese health officials identified a novel (new) coronavirus, now known as COVID-19. More than 75,000 people across the globe, in…

The State of the Union speech was less a report to the nation than a well-produced reality show and well-staged campaign rally. But what reall…

Attorney General Tim Fox has chosen to waste our taxpayer money to fund a lawsuit against the state of Washington. The lawsuit's sole purpose …

Women were once Republicans. In this centennial year of women’s suffrage, it is interesting to see what a difference a century can make.

FROM THE EDITOR: The Billings Gazette puts the public at the heart of its mission

The Billings Gazette unveils its new mission statement, and what it means for readers.