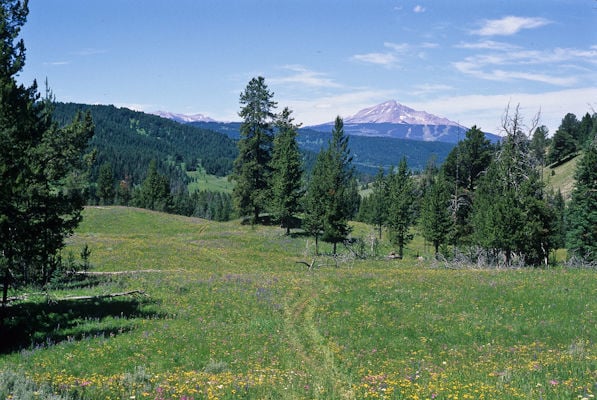 The Gallatin Range runs south from Bozeman to Yellowstone National Park. The range is the largest unprotected roadless area in the northern Greater Yellowstone Ecosystem and exceptional wildlife habitat.

In particular, the Buffalohorn and Porcupine drainages along the border of Yellowstone Park contains the best grizzly habitat in the northern Yellowstone ecosystem. These drainages are also a significant elk winter range and home to bighorn sheep, moose, cougar, wolf and wolverine as well as genetically pure Westslope cutthroat trout.

Gifford Pinchot, the first chief of the Forest Service, was so impressed with the wildlife value of the Gallatin Range that in 1910, he recommended that the mountains should be set aside as a wildlife refuge.

Eventually, this concern for safeguarding the area led to the 1977 passage of Senate Bill 393, the Montana Wilderness Study Act, which created the 155,000-acre Hyalite Porcupine Buffalohorn Wilderness Study Area (HPB WSA). The legislation directed the Forest Service to manage the WSA as wilderness until Congress determined otherwise.

Also, during the 1980s and 1990s, the Forest Service eliminated through purchase and trade the checkerboard private sections of land in the Gallatin Range, a relic of the railroad giveaways of the 1800s. Much of the Forest Service land in the Big Sky area was part of this trade and ultimately led to the consolation of private properties that enabled the creation of the resort.

The land trades were done to eventually allow the designation of the Gallatin Range as wilderness.

With wilderness designation in mind, one critical section of S. 393 allowed existing uses so long as they did not disqualify the area for further wilderness designation and permitted only those uses in existence in 1977. Unfortunately, the Forest Service allowed uses like dirt biking, mountain biking and snowmobiling in the WSA.

The failure to prohibit conflicting recreational use is codified in the 2018 release of a proposal by the Gallatin Forest Partnership to divide up the Gallatin Range into recreation zones. While recreation dominates, conservation appears to be a secondary concern.

The GFP proposal would eliminate the 155,000-acre HPB WSA and only protect 100,000 acres as designated wilderness. Especially egregious is the removal of wilderness protections for the Buffalohorn and Porcupine drainages.

Instead, the GFP replaces the WSA with a nebulous “Wildlife Management Area” (WMA) designation. WMA provides less protection than wilderness and jeopardizes the exceptional wildlife values of these drainages.

Such designation does not protect an area from increasing mountain biking use as well as other non-conforming intrusions, including logging for "forest health."

While recreational interests were at the table, grizzly bear, and elk were not seated at the table in the GFP discussions.

We are better than this. We have an ethical duty and responsibility to put aside our recreational desires and to make protection of the wildlife and wildlands the priority by designating a 275,000-acre-plus Gallatin Range Wilderness under the 1964 Wilderness Act. Wilderness is the “Gold Standard” for conservation.

George Wuerthner, of Livingston, is an ecologist who has published 38 books on natural history and environmental issues.

Billings will receive over $84,000 from the U.S. Department of Justice to support public safety efforts within the city.

A mountain biker, logger, wilderness advocate, and dirt biker walked into Montana’s Capitol. It sounds like the start of a bad joke.