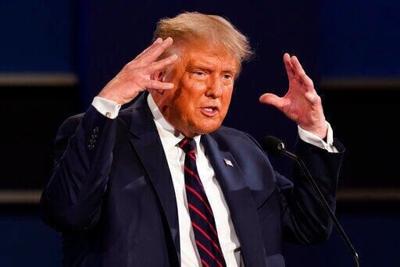 Wisconsin has suffered Donald Trump’s chaos and narcissism for far too long.

Get over him, Republicans. Your party is, or at least was, so much better without him.

Trump announced his third bid for the White House last week. Only the GOP, through its primary process, now has the power to pick someone else for the Republican nomination. Even if Trump stands little chance of winning the general election for president in 2024, given his poor record and soiled reputation, America can’t take that chance.

Trump declared himself a candidate just one week after most of his hand-picked hopefuls for U.S. Senate and governorships failed. Many of them were inexperienced celebrities in his mold. Republicans stumbled Nov. 8 in what should have been a big night for the GOP. The party out of power typically dominates the midterms. Inflation is high, and Democratic President Joe Biden’s popularity is low.

But not as low as Trump’s, who is repelling independent voters, energizing the left and ever so slowly — yet surely — turning off conservatives with his stale denials that he lost the 2020 election. He’s so stuck in the past. And all the evidence for years has proven that he did in fact lose by 7 million popular votes and 74 Electoral College votes.

Here's who really won and lost in Wisconsin's election

The Republican Party used to have some discipline and dignity under Wisconsin leaders such as former House Speaker Paul Ryan, R-Janesville. It tried to offer compelling ideas, not just rhetorical barbs. Trump trashed and chased Ryan and other reasonable Republicans out of office, including U.S. Rep. Liz Cheney, R-Wyo. Both Ryan and Cheney are far more fiscally and socially conservative than the reckless and opulent Trump ever was.

The deadly Jan. 6, 2021, riots at the U.S. Capitol led to Trump’s unprecedented second impeachment. Trump sat idle for hours while a mob he inspired terrorized Congress and chanted for Vice President Mike Pence’s hanging. A bipartisan majority of Congress voted to convict him (though not the two-thirds required to keep him out of office for good).

Trump mostly failed on the national and international stage. Yet his record in Wisconsin alone should have cost him all trust in the Badger State by now.

Trump’s snake-oil promise that Taiwanese manufacture Foxconn would create the “eighth wonder of the world” in Racine County predictably fell flat. If something sounds too good to be true, it probably is. Many Wisconsin Republicans need to relearn that lesson.

Trump launched reckless trade wars, creating havoc and lost sales for Wisconsin manufacturers and farmers overseas, and higher prices for consumers at home. He urged a boycott of iconic Wisconsin motorcycle company Harley-Davidson for making sensible business decisions. He tried to raid billions from the armed forces — including $8 million for the Wisconsin National Guard’s 115 Fighter Wing at Truax Field in Madison — to pay for his fake wall.

Worst of all was Trump’s lack of character, his juvenile behavior, his chronic lying and insults. The Republican Party, founded in Wisconsin on an anti-slavery platform that the Wisconsin State Journal championed, should never stand for any of that.

None of Trump’s antics mattered enough to most Republican leaders in Wisconsin for them to forcefully object when Trump was on top. But now that Trump has fallen, some are changing their tunes.

Assembly Speaker Robin Vos, R-Rochester, called for Wisconsin Republicans to move past Trump in light of the party’s poor showing in the Nov. 8 election. Another positive sign was the Assembly GOP expelling from closed meetings the election-denying chair of their elections committee, Rep. Janel Brandtjen, R-Menomonee Falls. They said she can’t be trusted. No kidding.

Vos, reelected speaker by his peers, should go further and remove Brandtjen, a gullible conspiracy theorist, from even sitting on this important committee.

Even U.S. Rep. Scott Fitzgerald, R-Juneau, one of the earliest Trump supporters back in 2016, may have finally had enough, if based on nothing more than his own political survival. Fitzgerald supported Trump’s attempt to overturn a fair election on Jan. 6, 2021 — even after the riot. Yet last week Fitzgerald declined to voice support for Trump’s third presidential bid.

Ultimately, Republican voters will decide Trump’s fate. We urge them to back other GOP candidates for the party’s presidential nomination, and to make their wishes clear to elected officials. The sad Trump era must finally end with no chance of him ever getting near the White House again.

Hugs, a humming economy and help from neighbors should make Wisconsin thankful

OUR VIEW: It's great to be back doing what we love