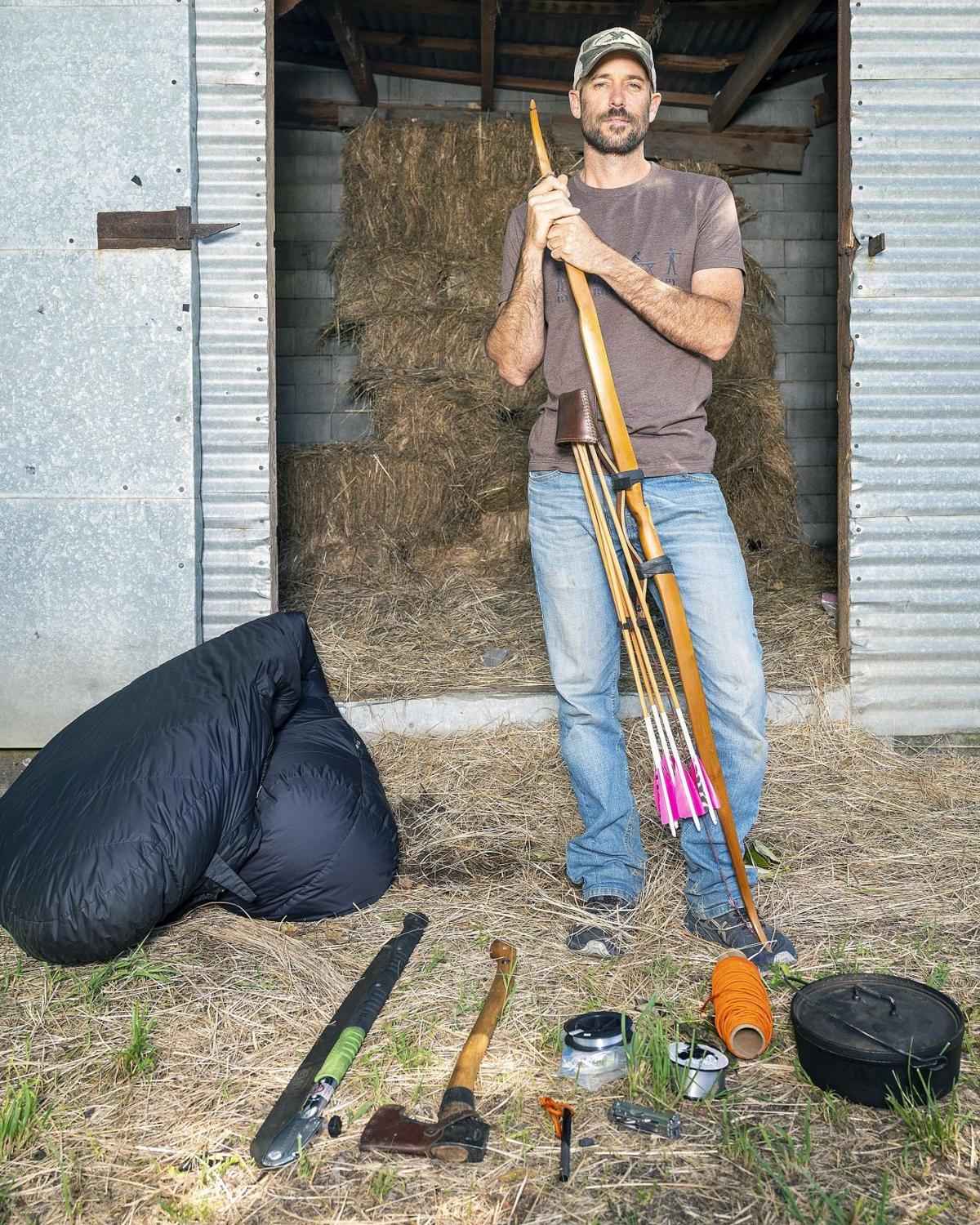 Clay Hayes, of Kendrick, Idaho, poses at his home with the 10 belongings he was allowed to take on the television show “Alone.” Last fall Hayes — an avid outdoorsman, bow maker and videographer — competed in the eighth season of “Alone,” which took place at Chilko Lake in British Columbia. Contestants are only allowed to bring 10 items with them and are challenged to survive in the wilderness by themselves for as long as possible. The winner is awarded $500,000. 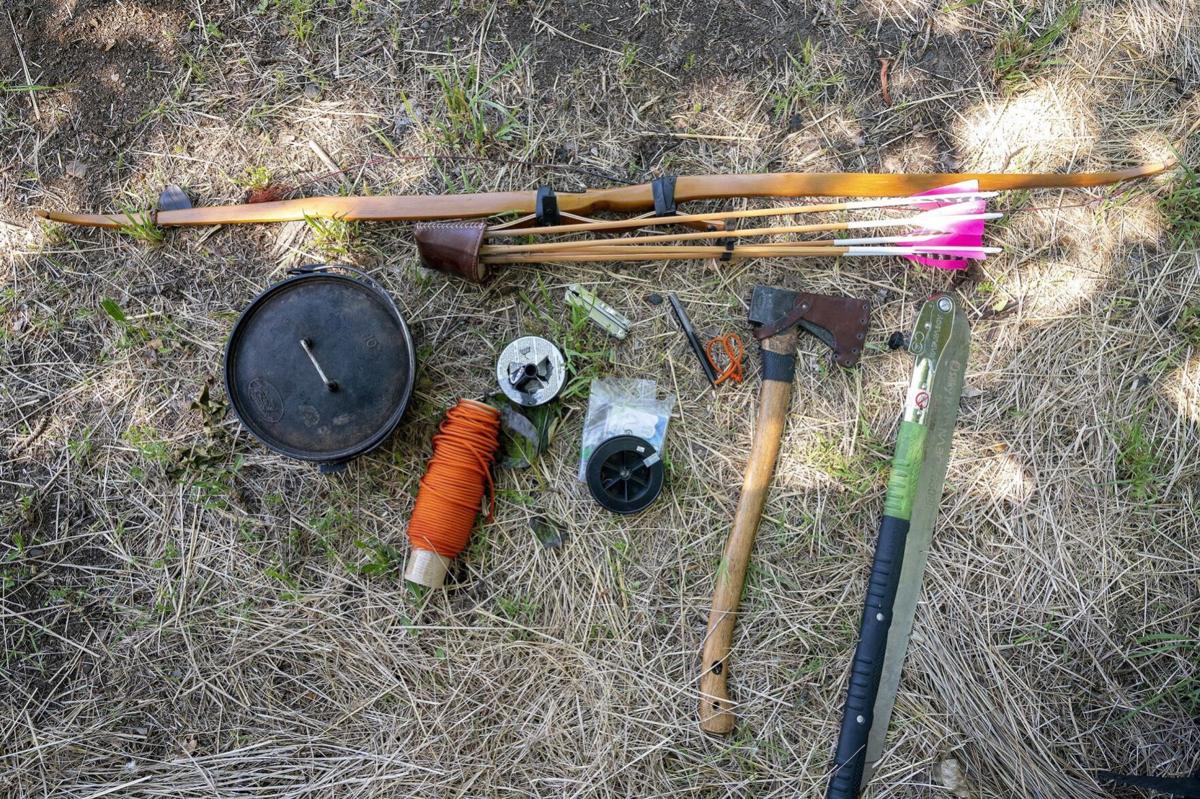 Nine of the ten items Clay Hayes brought with him to Chilko, British Columbia, are: a large saw, a small forest axe, hook and line, a ferro rod, a Leatherman, snare wire, paracord, a two-quart pot, a bow he made himself and nine arrows. Contestants could choose from over 40 items.

He’s a seasoned primitive bowhunter who relishes trips deep in the mountains of Idaho and swamps of the Southeast. But this was new.

“This challenge is different because there is no ending, there is no foreseeable end,” he said. “You are out there as long as you can stand it or until you are the last person, and you don’t know how long that is going to be.”

Hayes, who lives in the northwestern Idaho town of Kendrick, is a contestant on season eight of the History Channel’s “Alone” TV show. The premise is simple: Ten people are dropped off alone in remote wilderness. Each picks 10 survival items to take with them. The person who lasts the longest wins. In this case, the prize is $500,000.

They must secure the basics — shelter, food and water. They must survive the elements and any wild animals that may be in the area. During it all, they film themselves and treat the camera like a diary and their only companion.

During a recent interview, Hayes was able to talk about the basics of his experience but not allowed to reveal how long he lasted or details of anything that hasn’t already aired.

“You just have to wait and see,” he said.

Season eight of the show was filmed last fall and was the first to be set in occupied grizzly bear country — Chilko Lake in British Columbia, Canada.

“There were bears all over that place. There was just bears everywhere,” he said. “I think everybody ran into bears.”

But his first wildlife encounter was with another predator, one he knows well. Hayes was cooking on his first day when he heard a twig snap and soon spotted a mountain lion only about 30 feet away. The experience was shown on Episode 1 of the show.

“I was shocked. There is lions all over these mountains. North Idaho is full of lions,” he told the Lewiston Tribune. “I have spent a lot of time in the backcountry, and I have never seen a lion like that, so close and just doing his thing.”

Hayes is a wildlife biologist who was formerly employed by the Idaho Department of Fish and Game. Now, he works for himself making YouTube videos focused on hunting, woodcraft and natural history. He also teaches people how to build primitive bows and other archery equipment. He and his family — wife Liz and sons Coye and Fen — live near Kendrick, but spend part of their winters in Florida. They frequently are outdoors, and both professionally and recreationally; Hayes has had run-ins with cougars. But not like this.

“The only time I’ve seen mountain lions that close was in trees above dogs. So to have one, on day one, walk up behind me, yeah I was in shock,” he said. “But you know, I also wanted to eat that cat.”

Securing food is one of the primary concerns of contestants, and Hayes is thin.

“My body is just not designed to hold weight,” he said.

He viewed the animal as an opportunity to put on protein. As he turned to grab his bow, one of his 10 chosen survival tools, the lion melted into the forest.

“When I saw him turn to leave I tried to run at him to try to get him to tree,” he said. “But it was too late.”

Hayes viewed being on the show as a way to learn something about himself and to test the craft he has long practiced.

“It’s something that I have always wanted to do, to put all of your knowledge and skills to the test. This is the test, the ultimate test. Like can you do it? I wanted to know that.”

He said he also felt the wilderness and the isolation held lessons.

“I knew the solitude and the challenge, all of that stuff in combination, could reveal things that maybe I hadn’t seen before,” he said.

So what did he learn?

“You just have to wait and see.”

People aware of his appearance on the show often ask him if he enjoyed it, if it was fun.

“Fun is not a word I would use to describe this. It had its moments, for sure, but there was a lot of suck,” he said. “You can imagine. You are hungry like you have never been hungry before; but in the end there were definitely lessons out there that I kind of knew before but you never really know until something like that just really drives it into your bones. And I think that will come through in the series.”

The show airs at 6:30 p.m. on Thursdays and streams later on Amazon Prime. Hayes releases related videos on his YouTube channel before each episode. A recent video featured a fishing rod he built and used in episode one, and another details which 10 items he chose to bring and why.

“I spent a lot of time thinking about the gear choices, the items I would take,” Clay Hayes said.

Some were a given. His self-made Osage orange bow (“That is my life, that goes everywhere with me”), sleeping bag, Leatherman tool and his his 2-quart cast iron pot.

For a few months, he agonized over some of the other choices.

“You are weighing the pros and cons of taking these things, but the final 10 items I ended up taking I was very happy with,” he said. “I never had a time when I was out there when I was wishing I had made a different choice.”

The way Lane Bunner tells it, the wolf was chasing his Jack Russell terrier, had closed to within 40 yards or so, and he had to make a split-s…

Locating earthquakes in Yellowstone is a time-intensive process that requires the trained eye and extensive experience of a human analyst. But advances in computer algorithms, known as “machine learning” tools, hold promise for automatically locating earthquakes that might otherwise be overlooked, and the dawn of a new age in seismology.

Much is known about how the chemical compositions of gases vary across the Yellowstone volcanic system, but how they vary in time has remained largely a mystery. Our understanding should greatly improve with a recent installation of a station that continuously monitors gases and communicates those data in real time.

Montana Fish, Wildlife & Parks will be using the chemical rotenone to remove invasive goldfish from an unnamed private pond on upper CK Cr…

Animals that dig underground are called fossorial. The word comes from the Latin word fossor, which means digger.

MOOSE, Wyo. — The culling of non-native mountain goats from Grand Teton National Park will begin Sept. 22 as part of a multi-year management p…

A National Public Lands Day event for adults and children will be held on Saturday, Sept. 25, from 10 a.m. to 2 p.m. at the Montana Audubon Center.

CHEYENNE — The Wyoming Game and Fish Department is tracking an outbreak of epizootic hemorrhagic disease (EHD), a virus that primarily impacts…

Clay Hayes, of Kendrick, Idaho, poses at his home with the 10 belongings he was allowed to take on the television show “Alone.” Last fall Hayes — an avid outdoorsman, bow maker and videographer — competed in the eighth season of “Alone,” which took place at Chilko Lake in British Columbia. Contestants are only allowed to bring 10 items with them and are challenged to survive in the wilderness by themselves for as long as possible. The winner is awarded $500,000.

Nine of the ten items Clay Hayes brought with him to Chilko, British Columbia, are: a large saw, a small forest axe, hook and line, a ferro rod, a Leatherman, snare wire, paracord, a two-quart pot, a bow he made himself and nine arrows. Contestants could choose from over 40 items.