Yellowstone Caldera Chronicles is a weekly column written by scientists and collaborators of the Yellowstone Volcano Observatory. This week's contribution is from Jeff Havig, researcher in Earth and Planetary Science, and Plant and Microbial Biology, at the University of Minnesota.

When visiting Yellowstone National Park you may spend time exploring places where neutral to alkaline pH hot springs (those with pH values that are from around 7 — or neutral — to approaching 10 — about the value of bleach) are dominant features, precipitating silica (SiO2) to produce sinter deposits. This includes the Upper Geyser Basin (where Old Faithful and dozens of its geysing compatriots reside), the Midway Geyser Basin (home of Grand Prismatic Spring), the Lower Geyser Basin, and the West Thumb area, to name a few of the most popular.

While the charismatic geysers and bubbling hot springs may immediately draw the eye and consume your focus, take a moment to look at the bleach-white siliceous sinters that surround the springs and geysers. The sinters form due to dissolved solids in the hot spring water precipitating as the thermal waters cool. To the naked eye, they may not seem all that exciting, but when we use imaging techniques to zoom in and look more closely, they become much more fascinating.

First off, a little background is in order. The hydrothermal water that comes out as geysers and hot springs started off as snow and/or rain that percolated down into the groundwater. In Yellowstone, the cold groundwater can circulate down toward the magma chamber, where it is heated to very high temperatures, and this hot water can dissolve the rock that it comes in contact with.

Specifically, the rhyolitic volcanic rocks at Yellowstone are rich in SiO2, present as the mineral quartz or in aluminum-silicate minerals like feldspar. Thus, the hot water dissolves the silica present in the volcanic rock. If the hot water reaches the surface, we see it as hydrothermal features, like hot springs and geysers. But as this water cools, the dissolved silica becomes super-saturated and precipitates. Perhaps you have dissolved large amounts of salt in hot water and then observed the precipitation of salt crystals as the water cooled and evaporated. This is the same principle.

Back to the siliceous sinters. Using a scanning electron microscope (or SEM for short) — an instrument that uses electrons to essentially take pictures of microscopic features — textures of the sinters are revealed that you might not have expected to see. Using the SEM at the Continental Scientific Drilling facility in the Department of Earth and Environmental Sciences at the University of Minnesota, it is clear that some Yellowstone sinter is made up of very small string-like features, looking almost like a bunch of cooked spaghetti laid out on a plate, only here the strings were the diameter of a human hair. Zooming in more, it is apparent that those ‘strings’ are in fact hollow tubes. This is a big clue for figuring out how this siliceous sinter precipitated. So let’s look at some context.

While walking around the boardwalks of the Geyser Hill Group, Castle Group, and others in the Old Faithful area of the Upper Geyser Basin, you may first notice the more dramatic features, such as Castle Geyser. But you also likely notice the brilliant colors in the outflow channels of geysers and hot springs, such as the orange pool in the outflow of Tortoise Shell Spring next to Castle Geyser. The yellows, greens, oranges, reds, and browns that you see in these hot spring outflows (or in the pools of cooler-temperature hot springs) are pigments produced by photosynthetic bacteria such as cyanobacteria, chloroflexi, and chlorobi (as well as photosynthetic algae in the cooler zones). These photosynthetic microorganisms thrive in temperatures that would cause second to third degree burns with exposure for just a few seconds for humans. But they also act as nucleation points for silica that is dissolved in the hydrothermal water.

An SEM image of an algal filament shows that a silica sheath (the round outer part) has precipitated around the algae. So now we know what formed those little tubes. While algal filaments can be 5 to 10 micrometres across, bacteria are smaller — typically around 1 micrometre across for cyanobacteria — so bacterial filaments living in a hot spring outflow channel had silica precipitate around them. Then, when the outflow channel changed direction, the photosynthetic microbial community died and decomposed, but the silica sheaths remained as siliceous sinter.

These physical features are what scientists call a biosignature — something formed by life that in this case can be preserved in rocks. This is an example of a type of biosignature, or sign of past life, that the Perseverance Rover on Mars is currently looking for in a location called Jezero Crater. These are also the types of biosignatures that we can use to look for evidence of the earliest forms of life that existed more than 3.5 billion years ago on Earth.

So hopefully when you are enjoying a visit to the hydrothermal areas in Yellowstone National Park, or marveling at photos or videos of the spectacular geyser eruptions, you will take a moment to appreciate the siliceous sinter under your feet, and the geologic processes and billions of bacteria that contributed to its formation.

Many of Yellowstone’s hot springs, geysers, mud pots and fumaroles look different depending on the season, year, or sometimes even the day one visits. Colloidal Pool, in Norris Geyser Basin, is an interesting example of a feature that changed over the course of summer 2021.

Just south of Mammoth Hot Springs, near the north entrance of Yellowstone National Park, lies a jumble of white/gray rock known as the Hoodoos or, more formally, Silver Gate. The origin of this deposit is a quintessential tale of the dynamic nature of Yellowstone.

Caldera chronicles: Where acid-sulfate hot springs come from and why they are important

Yellowstone hosts thousands of thermal features which have diverse chemistries and origins. The most iconic features, like Old Faithful, have neutral to alkaline pH. Some Yellowstone features, however, can be acidic enough to break down the very rock that hosts them. 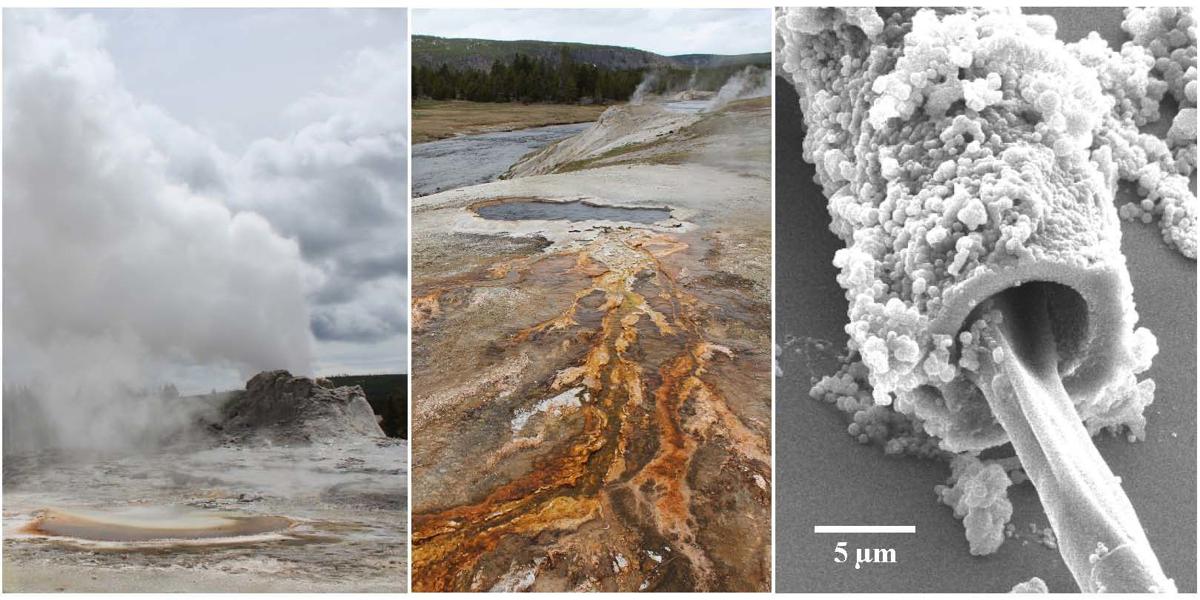 On the left is Castle Geyser during an eruption with a pool from nearby Tortoise Shell Spring showing photosynthetic pigments at the bottom. The middle image is of a small pool in the Geyser Hill Group in the Upper Geyser Basin with an outflow channel full of yellow, green, orange, red, and brown pigmented phototrophic microbial mats. On the right is an SEM image of a single algal filament (desiccated due to drying) inside a silica sheath — silica has precipitated around the outside of the filament, with small spheres of silica attached to the sheath. 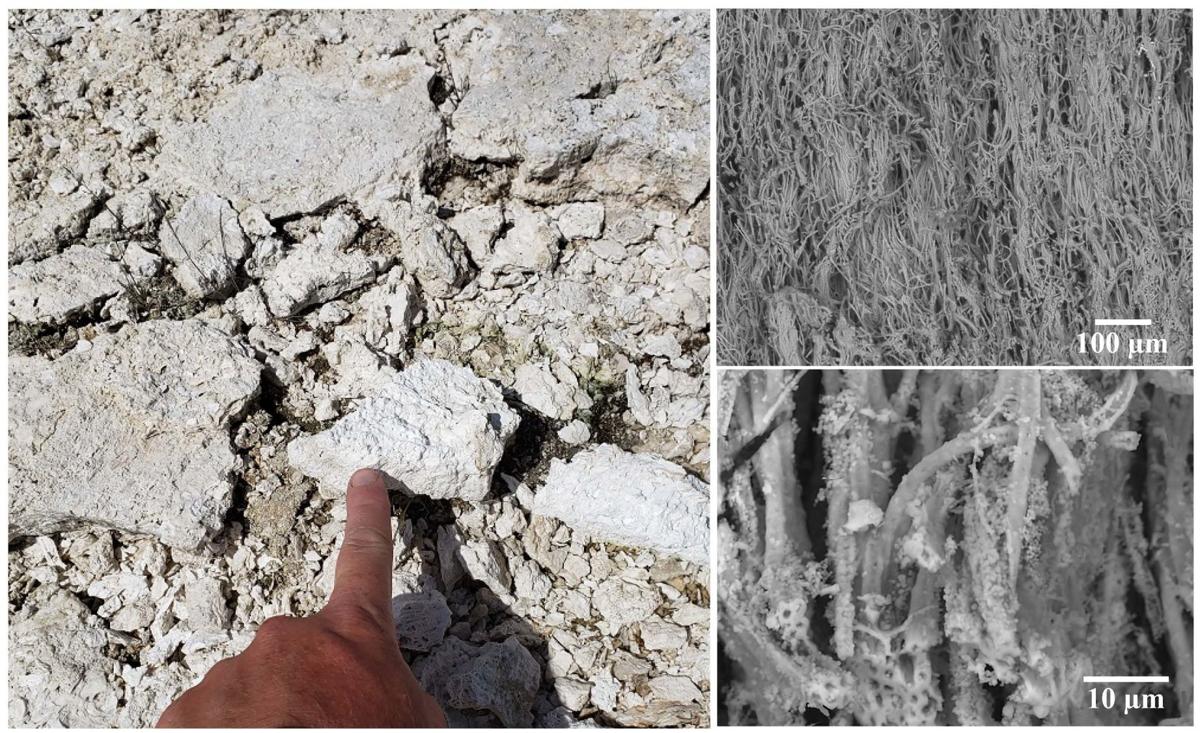 Left photo shows a loose piece of siliceous sinter that was precipitated around a photosynthetic microbial mat in the Lower Geyser Basin. The microbial mat died when the outflow channel changed positions. In the upper right, a Scanning Electron Microscope image of siliceous sinter, with sheaths of silica that had precipitated around the once-living phototrophic microorganisms, making a texture that looks like cooked spaghetti. In the lower right, a closeup SEM image of the broken ends of those ‘spaghetti’ pieces, showing the hollow inside where there once was a bacterial filament that was part of a photosynthetic mat. The original bacterial filaments were about the diameter of a human hair.