The proposals will go to the Fish and Wildlife Commission when it meets Monday in Helena. The meeting starts at 8 a.m. and can be watched at regional headquarters or listened to online.

The proposals target hunting districts near the Big and Little Snowy mountains and along the eastern side of the Crazy and Little Belt mountains, which are meeting only 43 to 68 percent of their antlerless elk harvest objectives. In Hunting Districts 411, 511 and 530 around the Snowies the elk population is estimated at about 7,300. That figure is 918 percent over the population objective of 800 elk.

“If we meet the harvest criteria it only stops the population from growing,” said John Vore, FWP’s Game Management Bureau chief. “Even if we doubled the harvest it would take a couple of years to lower the population.”

Republican lawmakers narrowly passed legislation in 2003 requiring FWP to manage to population objectives that are based on landowner tolerance, not what the land can biologically support. But that has proven complicated in areas with large swaths of private land where public hunters are not allowed access, or public access is limited. Even where access is allowed, elk will migrate off any property where they are being hunted and hide out on nearby land where hunting isn’t allowed.

“Access is definitely a big issue in many of these places,” Vore said. “We could have elk season all year around and allow hunters to shoot 10 elk,” but without access to the animals even that would fail.

As proof that elk are a difficult animal to kill, consider that in 2016 only 12 percent of Montana’s roughly 113,500 elk hunters were successful.

In response to growing elk populations, two years ago FWP instituted an elk shoulder season that allows hunting in the fall before the archery season, in between the archery and rifle season and after the rifle season in 43 hunting districts where elk were over objective.

The extended season has demonstrated some success. “In the last two years 32 percent of adult cow (elk) harvest totaling 590 cows in these five HDs was during shoulder seasons,” according to FWP.

Under the proposals, FWP would make an unlimited number of antlerless elk B licenses available for purchase over the counter in the hunting districts, rather than through a drawing that has limited the number of licenses. The tags would be good in the archery or rifle seasons. Hunters could buy only one of the B licenses. Either-sex permits offered in the districts would remain.

For example, in HD 580 along the east side of the Crazy Mountains, only 1,500 antlerless elk B licenses were offered through a drawing this past season. Under the new proposal those would be unlimited and available without applying through a drawing.

Offering the licenses over the counter also allows any nonresident elk hunter to purchase a B tag. When the elk licenses are limited and offered through a drawing, nonresidents are allowed only 10 percent of the total number of licenses offered.

Whether that change would result in an increase in the number of nonresident elk B tags sold is unknown, Vore said. But last year when FWP offered doe tags in Carbon County to assess the spread of chronic wasting disease, they sold out in minutes and people drove from as far away as Washington in the middle of the winter to hunt.

“When we offer opportunity, certainly a lot of hunters look forward to that,” Vore said.

Limited elk B tags in the five hunting districts did sell out this season, he added, demonstrating that there may be an appetite for more of the cow elk tags.

The changes would also limit the bull elk harvest in four of the hunting districts. For example, in 580 a general elk A license last year allowed a hunter to shoot any elk — bull or cow. Under the new proposal that would be limited to any elk only the first two weeks of the rifle season. The final three weeks would be cow elk hunting only.

In the Little Belts’ HD 540, the change would mean an elk A license — which had been good for a cow or bull with brow tines the entire rifle season (no spike bulls) — would allow only spikes to be shot in the first two weeks of the season. The final three weeks would be antlerless only.

In HDs 511 and 530, on the south side of the Snowies, an elk A tag would change from allowing spike or cow harvest the entire rifle season to a spike harvest only in the first two weeks of the season. The final three weeks would be cow elk hunting only.

Only HD 411 hunters would see additional opportunity. In that district an elk A tag had been good for cow elk-only the entire archery and rifle season. Under the proposed change spike bulls or cows could be killed in the first two weeks of the archery or rifle season with an A tag.

The reason FWP wants to focus hunters on cow elk is that they are the ones responsible for growing herds. Shooting a bull elk reduces the population by one. Shooting a cow elk, which can get pregnant, reduces the herd by two or more if the same cow gets pregnant more than once in its 10-year lifespan.

But reducing the bull harvest can hit the pocketbook of landowners who outfit their land. Bull hunts are more attractive to hunters and therefore worth more money.

“There’s some good stuff in there, I think, to help us get rid of the problem,” said Chuck Rein, a hunting outfitter and landowner along the east side of the Crazy Mountains in HD 580. “But taking the bull elk harvest out of the scenario is a pretty clear affront to the landowners.”

Rein said any notion that landowners might respond to the loss of revenue by “swinging the gates open” to allow more public access is unfounded. “That’s not how landowners are wired,” he said.

He also said that many public hunters aren’t interested in packing a cow elk out on their back, even if the opportunity were available to hunt private land.

As proof that bull elk hunting is more popular, FWP’s statistics show that in the last two years in HD 580 hunters killed 541 bull elk when a harvest of 369 bulls was needed to meet FWP objectives. The cow elk harvest, on the other hand, was 383 animals, while 554 were needed to meet objectives. For the entire season the harvest fell more than 580 elk short of FWP requirements, even though 167 cow elk were taken during the shoulder season, which allows pre- and post-season hunting.

FWP, some commissioners at odds over Montana's extended elk season

Some argue that the elk objectives should be altered to make the numbers more in line with the amount of elk that exist on the landscape today. Vore said that would just push a resolution of the problem farther down the road as elk would continue to multiply.

“The longer we don’t reach our objective the harder the problem is to fix,” he said.

Added into the complexity of the situation is the unpredictability of the weather. Snow, especially heavy snow, can push elk out of the mountains and into areas where they are easier for hunters to kill. But heavy snow also limits hunter movement by vehicle as well as on foot. Likewise, mild weather can limit hunter success.

“It took us 30 years to get into this mess, we’re not going to get out of it in three years.”

Hunters on both sides of the U.S.-Canada border worry that chronic wasting disease cases have accelerated in the past year. 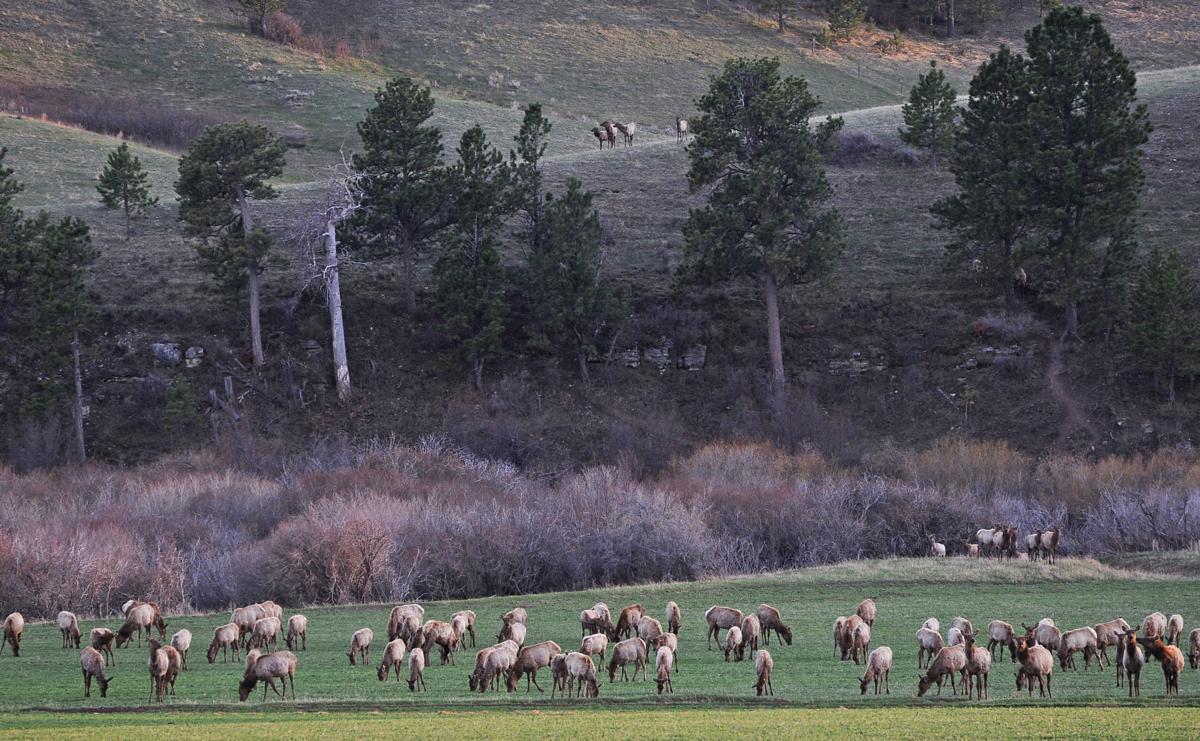 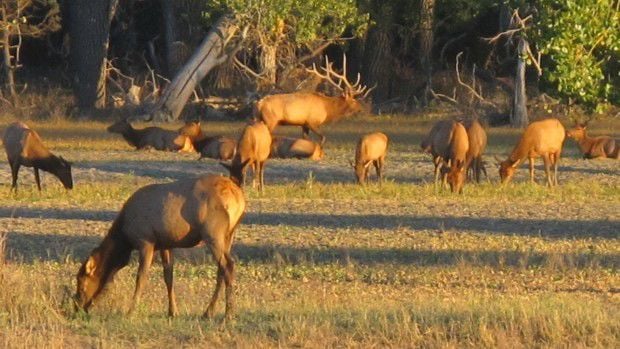 Cow elk hunting opportunities would increase in five hunting districts where the animals' population continues to grow if the Fish and Wildlife Commission agrees to changing regulations on Monday. 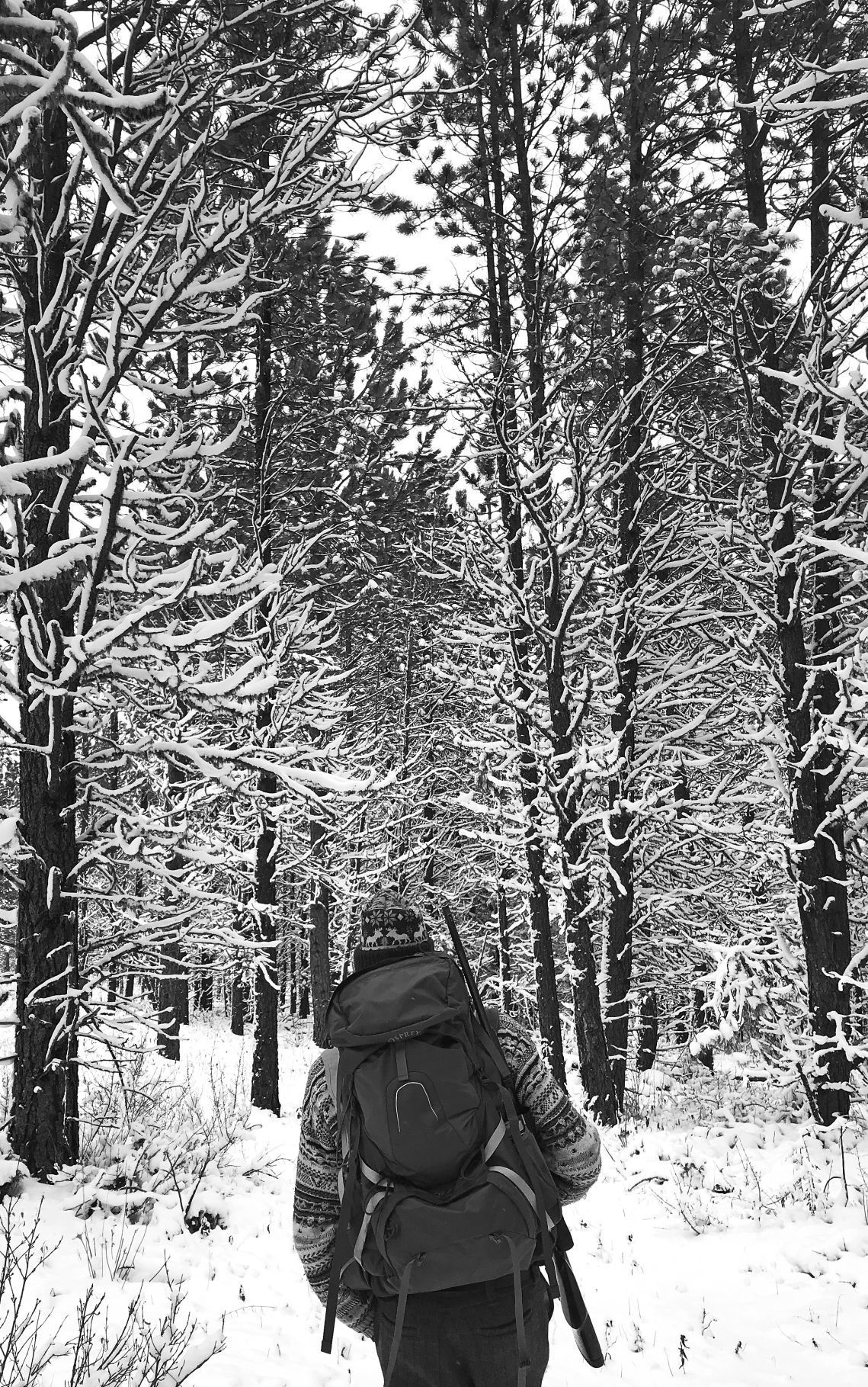 Elk hunters could have more opportunity to kill a cow elk next season if the Fish and Wildlife Commission approves a proposed increase in antlerless tags. 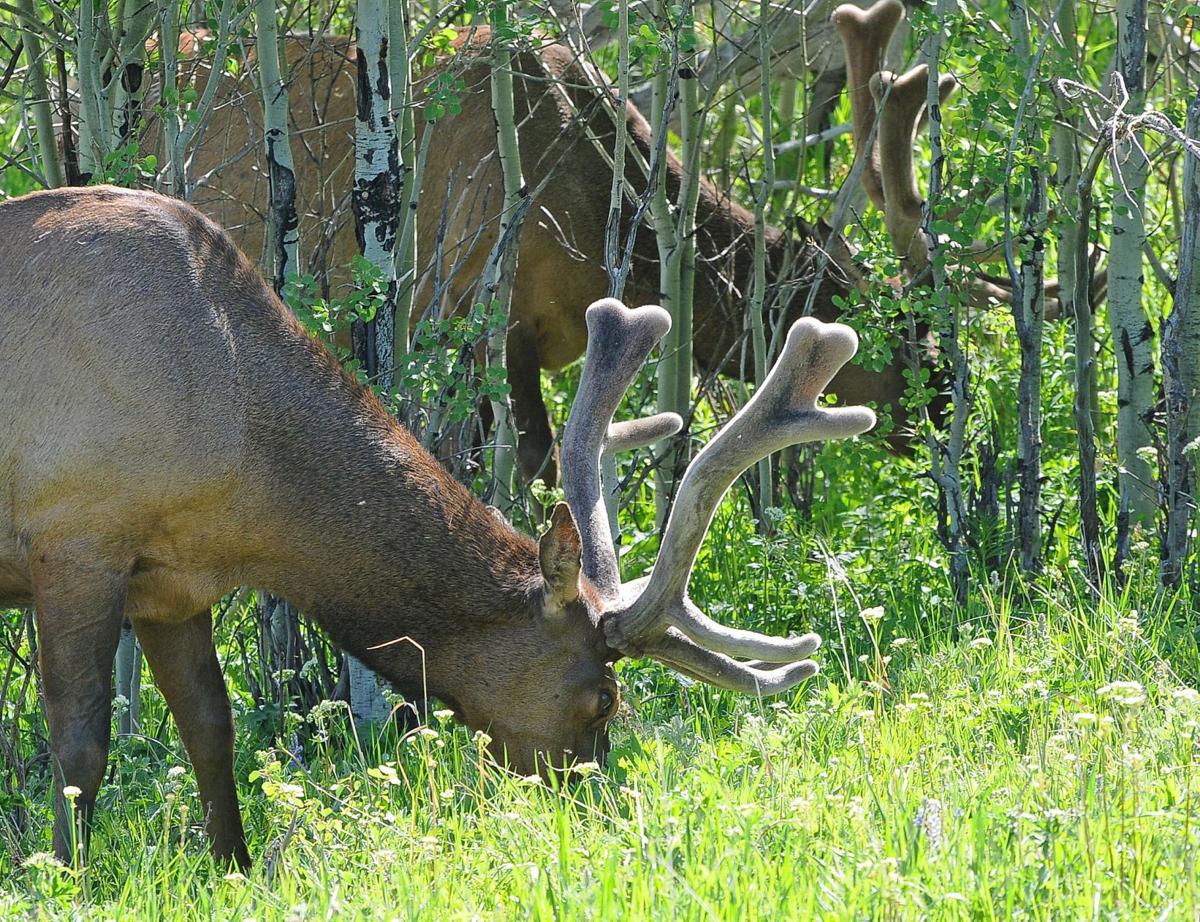 Bull elk hunting opportunities in four of the five hunting districts would be reduced.