It was a wild and unusual confrontation that Judy Lehmberg and her husband Verne witnessed four years ago in Yellowstone National Park in May.

While capturing video footage of ruddy ducks at Floating Island Lake a young black bear unknowingly got too close to a sandhill crane’s chicks.

“It was pretty neat to watch,” she said.

The footage she shot of the crane and bear just came to wider public attention last week when CBS Sunday Morning aired the scenario. Lehmberg has been providing content for the show’s nature segment for about three years.

A retired Texas professor of biology, Lehmberg guessed the bear was a youngster who had just been kicked out by its mother because it seemed young and dumb. As it wandered near the lake the bear got too close to the chicks, sending the male crane into full attack mode.

Standing about 4 feet tall with a 6-foot wingspan, a 7- to 11-pound adult sandhill crane can appear much more fearsome and threatening than its real size might imply, even if it is one of the largest birds to live seasonally in Yellowstone. They punch above their weight, to use the boxing analogy. And like many birds, sandhills are very protective of their young.

“I’ve seen geese chase off various predators over the years,” including much larger coyotes, he said. “They’re aggressive enough that they can turn the tables on predators sometimes.”

The sandhill crane proved so threatening that it drove the young black bear toward a pine tree, which it climbed partway up while looking at the crane with an almost quizzical expression, as if to say, “What did I do to make you so mad?”

To heighten its fearsome behavior, the male crane stood with its wings partly outstretched to appear larger.

But this black bear chose not to risk fighting back, eventually running off with the crane on its tail. At one point the crane hopped atop a boulder, exaggerating its size even further.

Lehmberg could relate to the bear’s confusion and fear. She was once walking across Swan Lake Flats in Yellowstone when she accidentally walked between two adult sandhill cranes.

“They kept circling me and yelling, and I was afraid to move,” Lehmberg said. “You look at the bills on those things and they could do some damage. And they know where your eyes are.”

She has also seen sandhill cranes fight each other. In another instance Lehmberg witnessed a grizzly bear amble past a sandhill crane on the west side of the park, but the two didn’t interact.

“They kind of gave each other the eyeball,” she said, but it was almost like the grizzly bear decided “I don’t want to eat you today.”

As Case noted, birds have a few different tactics to protect themselves and their young. One is camouflage, a reason that female birds are often less colorful than male birds, he said. Killdeer, he pointed out, will fake a broken wing and run to lure predators away from their nests as a form of distraction behavior. Birders will also often see smaller fowl attacking larger predators, like hawks and owls, sometimes when both birds are in flight, an aerial combat as amazing to watch as World War I biplanes swooping, climbing and diving.

Getting such unusual photos and video has become a source of retirement income for the Lehmbergs, who camp out along the Yellowstone River outside Gardiner about six months of the year to be close enough to visit the park in search of wild scenarios.

“This is the hardest industry in the world I’ve had to break into,” she said of video production.

Luckily, it’s not her main source of income. Instead, money from videos helps supplement the couple’s retirement income, allowing them to also visit other wild places like South Africa, where Lehmberg once taught biology in Johannesburg. But in the fall and spring, Yellowstone is one of her favorite places to visit.

“The bears are coming down now,” she said.

Fall is when bears are on a feeding frenzy, packing on calories as quickly as possible so that their fat stores can carry them through the long winter months of hibernation.

The Lehmbergs avoid the busy summer months of June, July and August in Yellowstone, when the majority of the year’s roughly 4 million visitors cram into the park.

“The tourists scare the heck out of me,” she said.

Most of the sandhill cranes that visit Montana in the spring and summer are members of the Rocky Mountain Population, or RMP, which numbered about 21,800 birds as of 2018. An estimated 7,500 of that population summer in Montana.

"In the Dillon-Twin Bridges area the staging area count can be as high as 2,500-3,000 cranes," according to Claire Gower, a Bozeman-based Montana Fish, Wildlife & Parks wildlife biologist. "We commonly count upwards of 500-700 in the Paradise-Shields valley; 650-1000 in the Clark Fork of the Yellowstone River near Red Lodge; about 700 in the Toston area, and about 500 in White Sulphur Springs."

According to the U.S. Fish and Wildlife Service, there are five populations of greater sandhill cranes (Grus canadensis tabida) in North America: the Eastern, Rocky Mountain, Lower Colorado River Valley, Central Valley, and the MidContinent — the largest population at more than 640,000 birds.

One reason sandhills may be so defensive of their young is that they have so few of them. Two eggs are commonly laid, but predators like raccoons, skunks, ravens and crows are known to target the eggs for food. Once hatched, the young — called colts — have about two-and-a-half months to grow large and strong enough to fly south in September.

“We have a lot of pairs that don’t pull off young,” Gower said.

This summer Gower helped net two adult sandhills at night, one each in the Paradise and Ruby valleys. GPS transmitters were attached to the birds’ legs to track their travels as part of a larger USFWS study of wetland use, staging areas and how cranes are redistributing across the landscape as land use changes, Gower said.

Adult cranes are long lived — 15 to 20 years — and monogamous, returning to the same territory each year. The pairs will aggressively defend their wetland nesting territories from other cranes. After colts hatch, the family moves to open uplands or meadows to feed. The family returns to the marsh each night to roost, often at the nest site or on platforms built by the parents, according to the USFWS.

The Rocky Mountain Population of cranes will migrate to the San Luis Valley in Colorado for about three to four months each year. Their main wintering area is the Middle Rio Grande Valley in New Mexico.

As part of a multi-year partnership between the university and America's first national park, MSU engineering student Megan Oaklief monitors how electricity and propane are used at Yellowstone National Park's Lamar Buffalo Ranch.

A man suffered burns to much of his body after falling into a hot spring near Old Faithful on Sunday.

The U.S. Fish and Wildlife Service and Montana Fish, Wildlife & Parks are seeking information on the shooting of a grizzly bear in northwe…

Wildlife officials in Montana say they captured and killed a grizzly bear that killed livestock east of Rogers Pass along the Rocky Mountain Front.

Snowfall has closed the Yellowstone National Park route from Tower Falls to Canyon Junction over Dunraven Pass, the Park Service announced on …

A presentation on Oct. 21 during the Yellowstone Valley Audubon Society meeting will focus on birds and other fliers that migrate to and throu…

After questioning hikers in Yellowstone National Park a Utah research came up with suggestions to get people to be more bear aware. 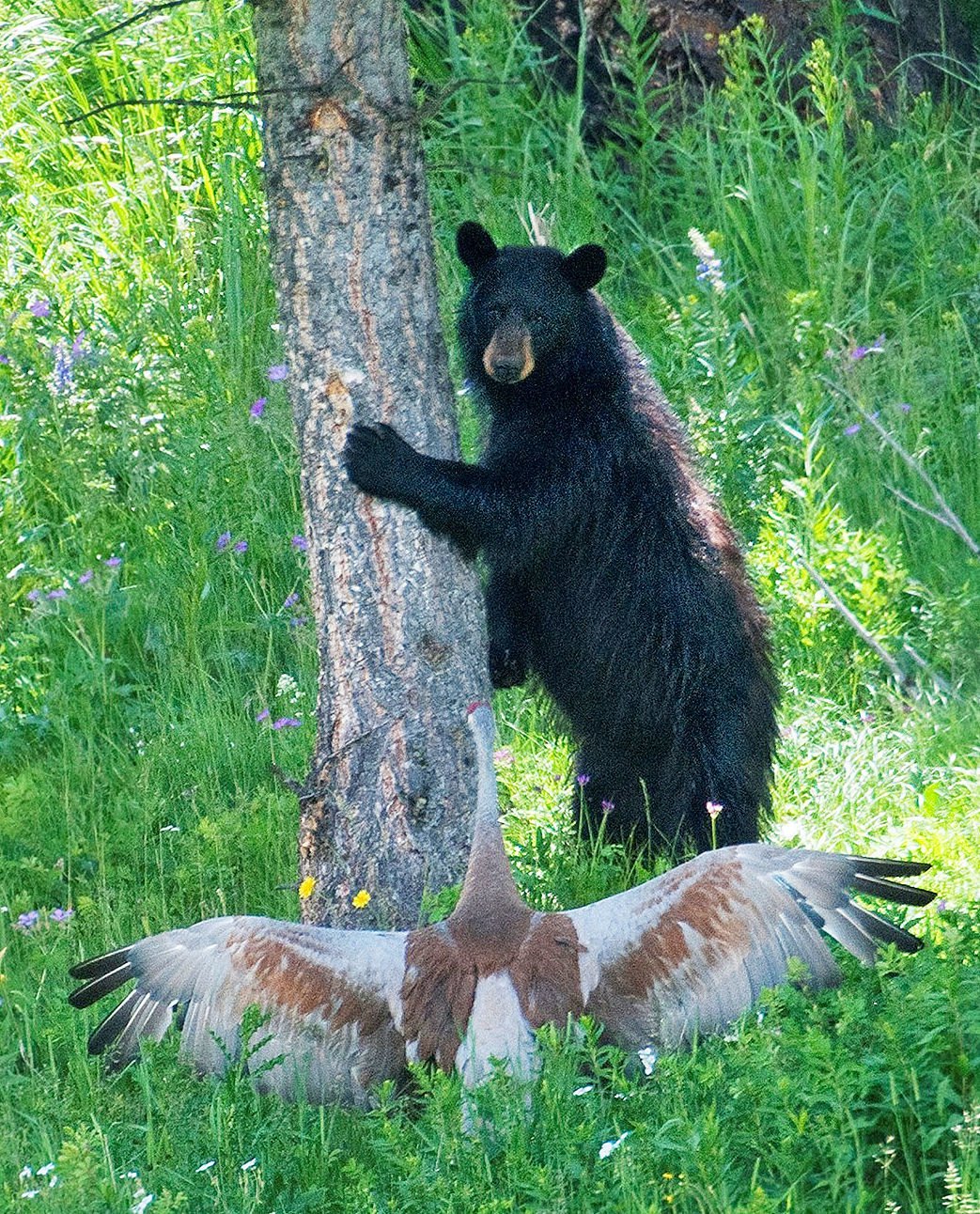 A black bear warily eyes a male sandhill crane that assumes a threatening posture. The confrontation took place in Yellowstone National Park in 2015 but recently gained attention via broadcast on CBS Sunday Morning. 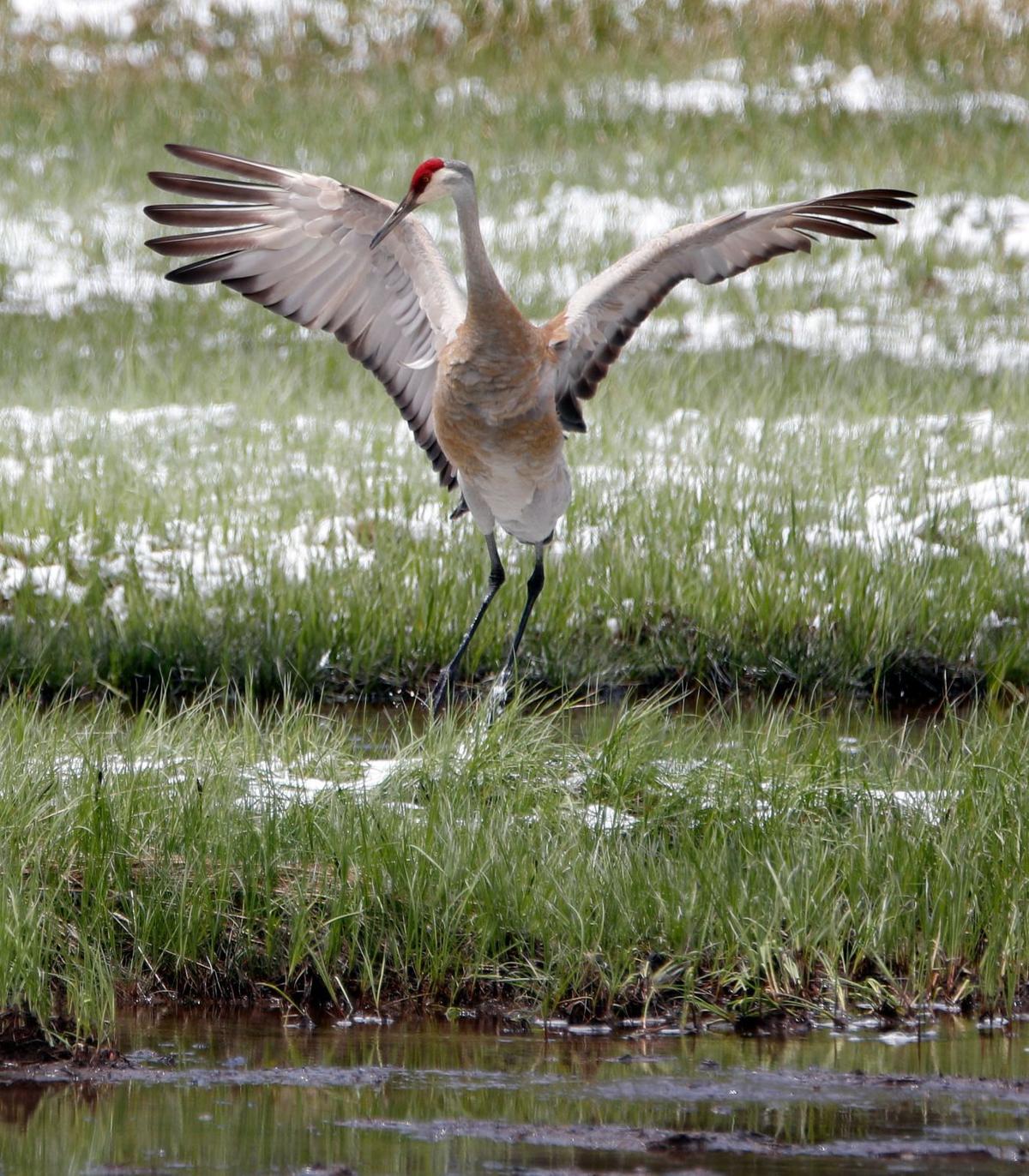 A sandhill crane spreads its wings along a creek in Yellowstone National Park. Cranes are one of the largest birds found in the park, standing up to 4 feet tall.