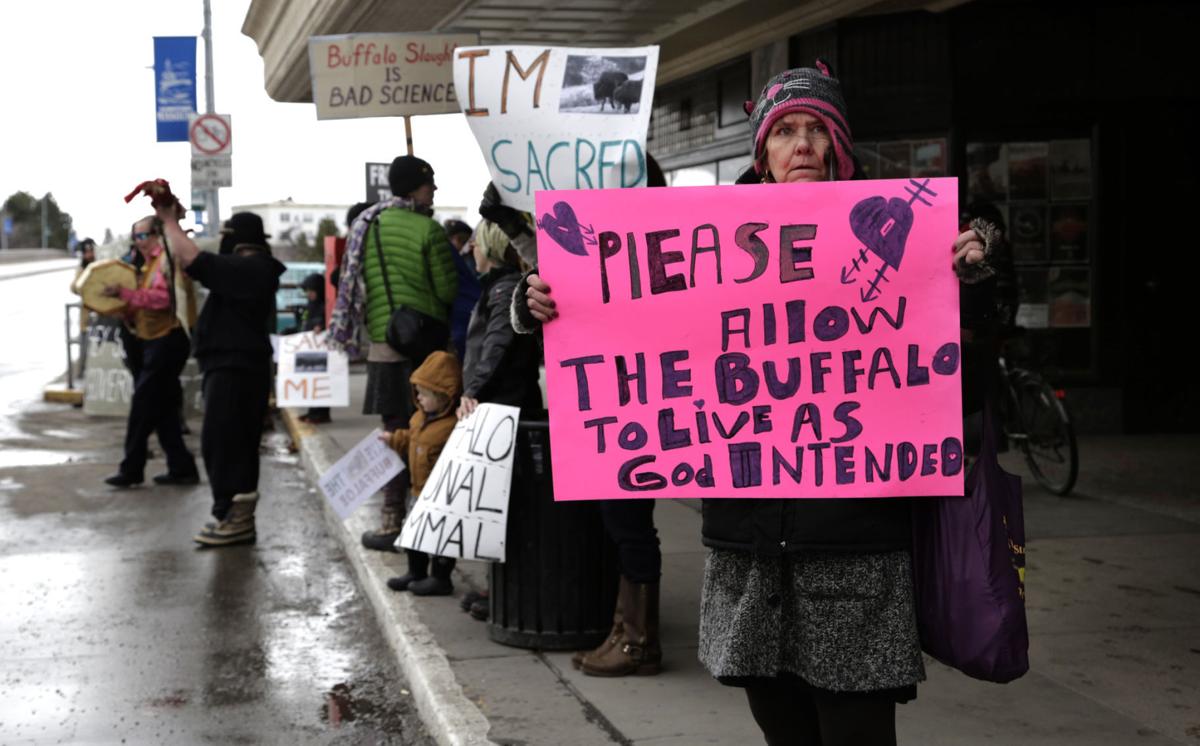 Laurie Blessing, of Whitefish, stands with a sign outside the Wilma Theater near the Higgins Avenue bridge in 2018 with a group of supporters for a rally held by the Buffalo Field Campaign. The group has filed two lawsuits in seeking to have FOIA requests fulfilled. 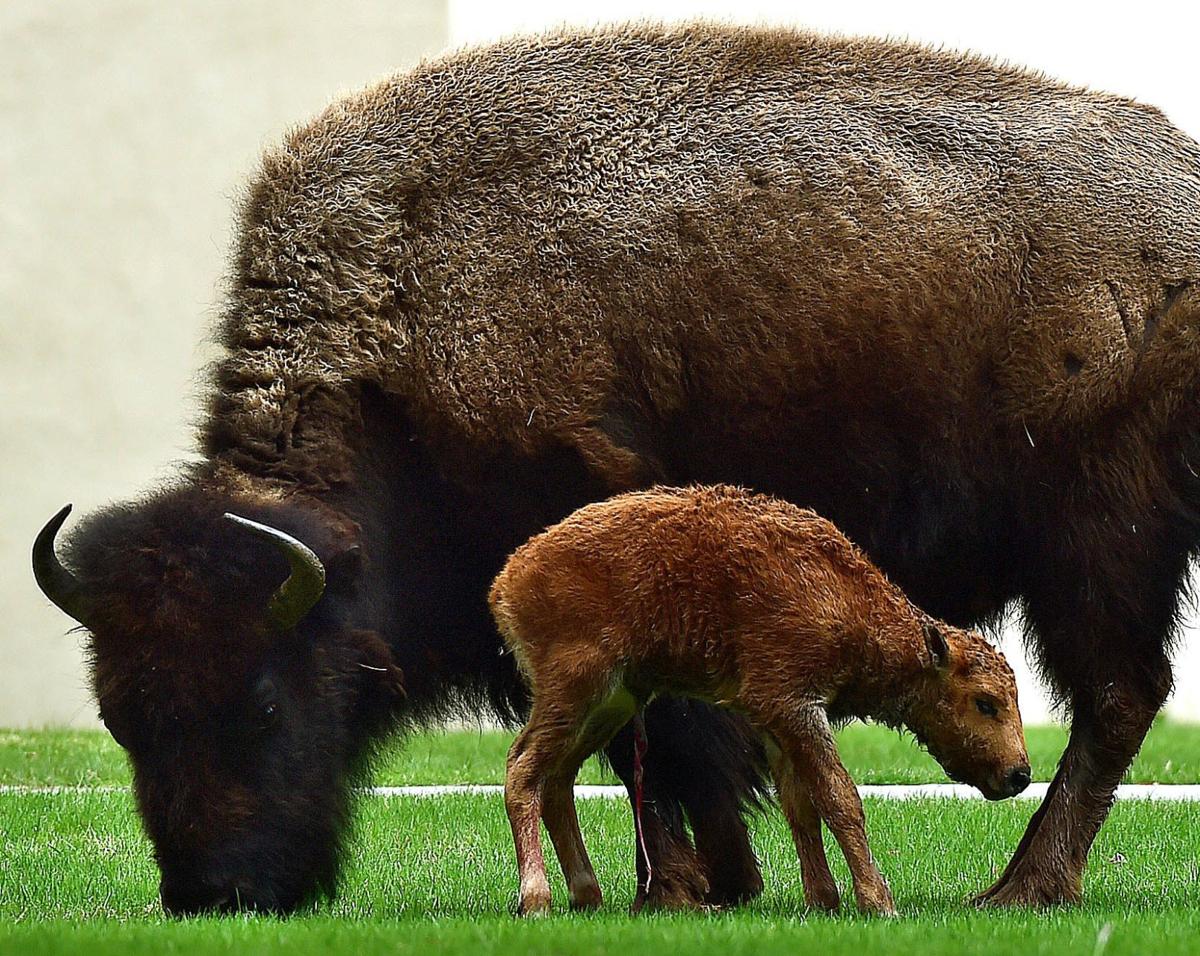 A bison calf, born on a lawn in Mammoth, stands for the first time as springtime arrives in Yellowstone National Park.

A Montana-based bison advocacy group has filed a lawsuit against Yellowstone National Park and the Department of Interior after not receiving requested records through Freedom of Information Act requests more than a year ago.

Attorneys for Buffalo Field Campaign filed the complaints in U.S. District Court in Missoula on Thursday. In a press release the group charged that the federal agencies are “unlawfully withholding public records on how the agencies manage wild bison in Yellowstone National Park.”

Yellowstone released a portion of the documents requested, some with redactions BFC is challenging. The suits seek release of the rest of the documents and reimbursement for attorney expenses. Yet in its press release BFC acknowledges that by the time it receives any documents from the agency they will be outdated.

In 2016 the American bison was designated the official mammal of the United States. As of October 2019 it was estimated that about 4,800 bison were living in Yellowstone National Park, a 6.4% increase over 2018. The park’s animals are recognized as some of the purest bison, genetically speaking, since they were never interbred with cattle. Three distinct genetic lines were once found in the park, including a native population, one from Texas and another from northwestern Montana. 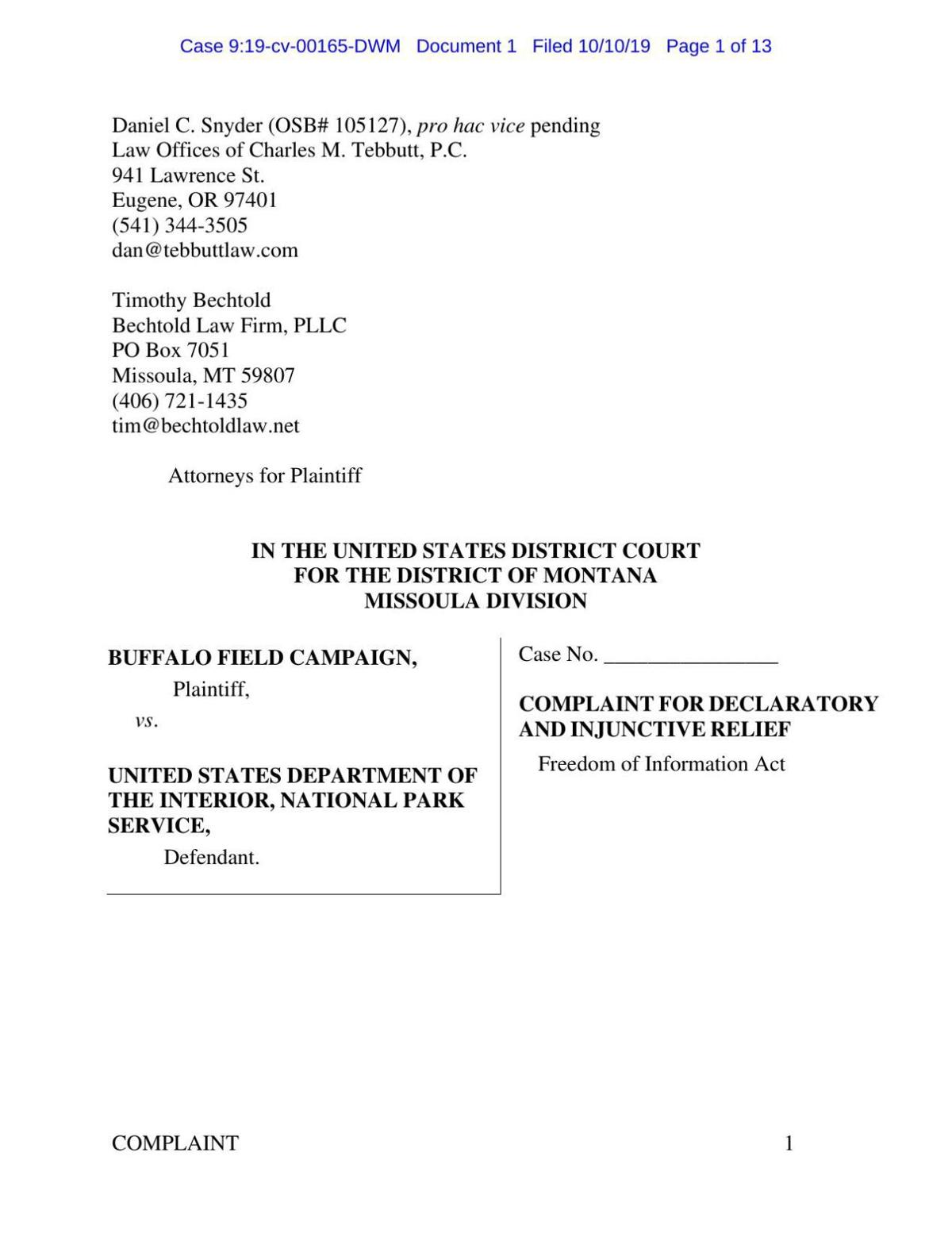 BFC is not alone in its frustration with receiving prompt responses to FOIA requests.

Some federal judges are calling for Congress to allocate more funding to federal agencies to speed up the processing of FOIA requests, which have climbed under the Trump administration. Denials or delays, such as the ones cited by BFC, are leading to a heavier caseload for judges with already cramped calendars. 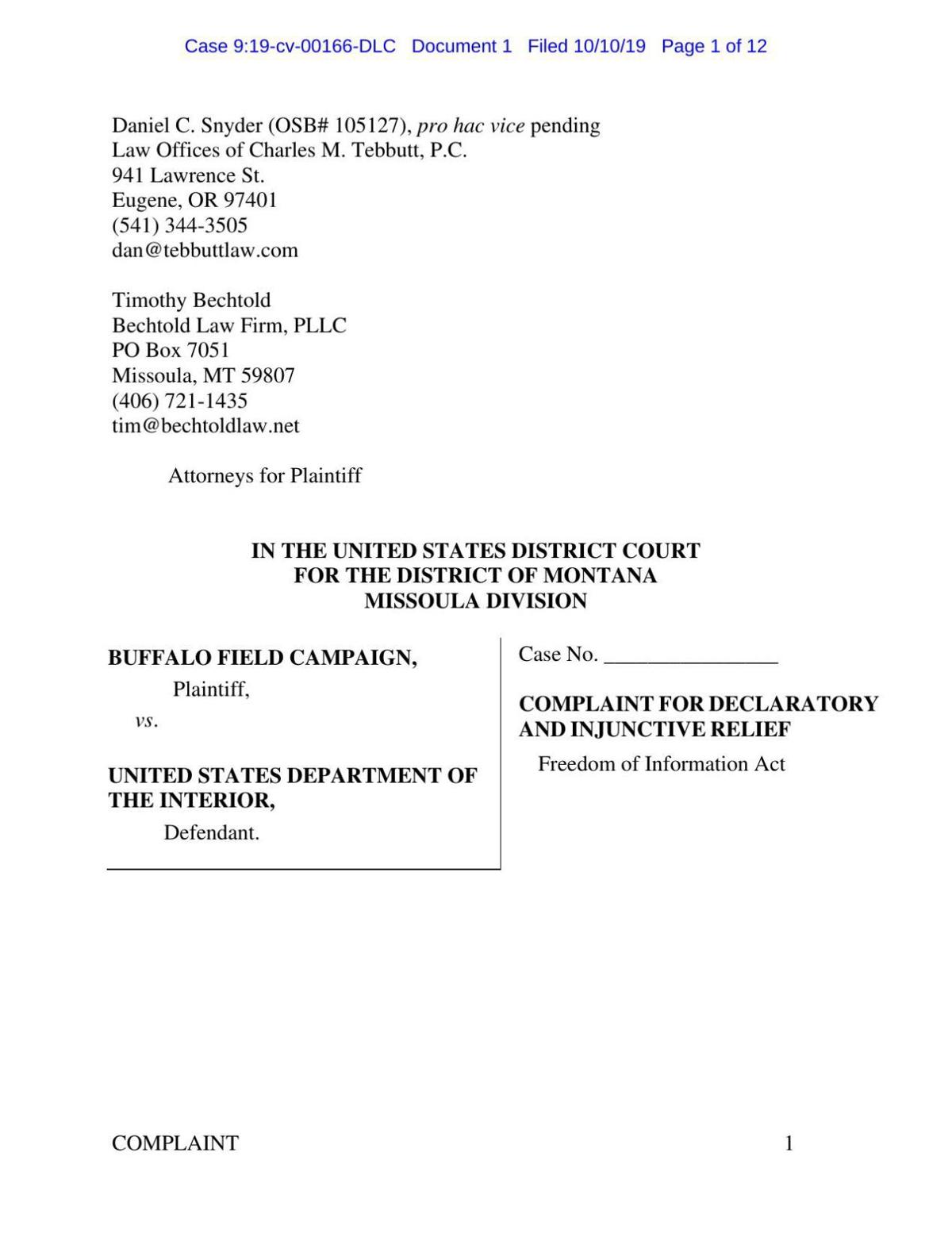 “It shouldn’t fall on the backs of the citizens to wait years to find out what the government is up to,” U.S. District Judge Reggie Walton was quoted saying in an Oct. 1 Courthouse News Service story. The story related to the judge’s concern that federal agencies were slow to respond to FOIAs.

A 2018 Associated Press analysis found that in 2017 the Trump administration set a new record during the past decade for denying FOIA requests, completely filling only about one in five requests.

Since then agencies have moved to further increase their control over FOIAs. In December 2018 the Interior Department proposed regulations to “expand its discretion to block” FOIA requests, according to the Public Employees for Environmental Responsibility.

In June the Environmental Protection Agency enacted a new rule, without public comment, to allow agency officials — including political appointees — more power over which documents are distributed in a FOIA request.

Critics say the changes have made it easier to deny FOIA requests while agency officials say the moves help streamline a sometimes lengthy and time-consuming process.

BFC requested the documents more than a year ago.

“Closing off public access to records of what the U.S. government is doing to the buffalo in our name is against the law,” said James Holt, Buffalo Field Campaign’s executive director, in a press release.

Montana has pressed for a reduction in Yellowstone's bison herd as a way to reduce their presence outside the park. A large portion of the herd has been exposed to the disease brucellosis, which can be transmitted to cattle. Yet hundreds if not thousands of elk, which also carry the disease, are allowed to roam freely.

To reduce the risk of elk transmitting brucellosis to cattle, herders try to keep the animals separated in spring. Kill permits are also issued to landowners and hunters when elk refuse to leave cattle pastures. To contain the disease, the state monitors the distribution of infected elk on the landscape inside what’s known as the designated management zone.

In an attempt to lessen the shipment of bison to slaughter, Yellowstone National Park has been working with the Fort Peck Indian Reservation to ship live bison to a holding facility. Montana refuses to allow transport of the bison until they have passed quarantine, out of fear of spreading brucellosis to Eastern Montana. With its quarantine capacity limited, the Park Service is attempting to find partners to fund more facilities for holding bison next to the park. 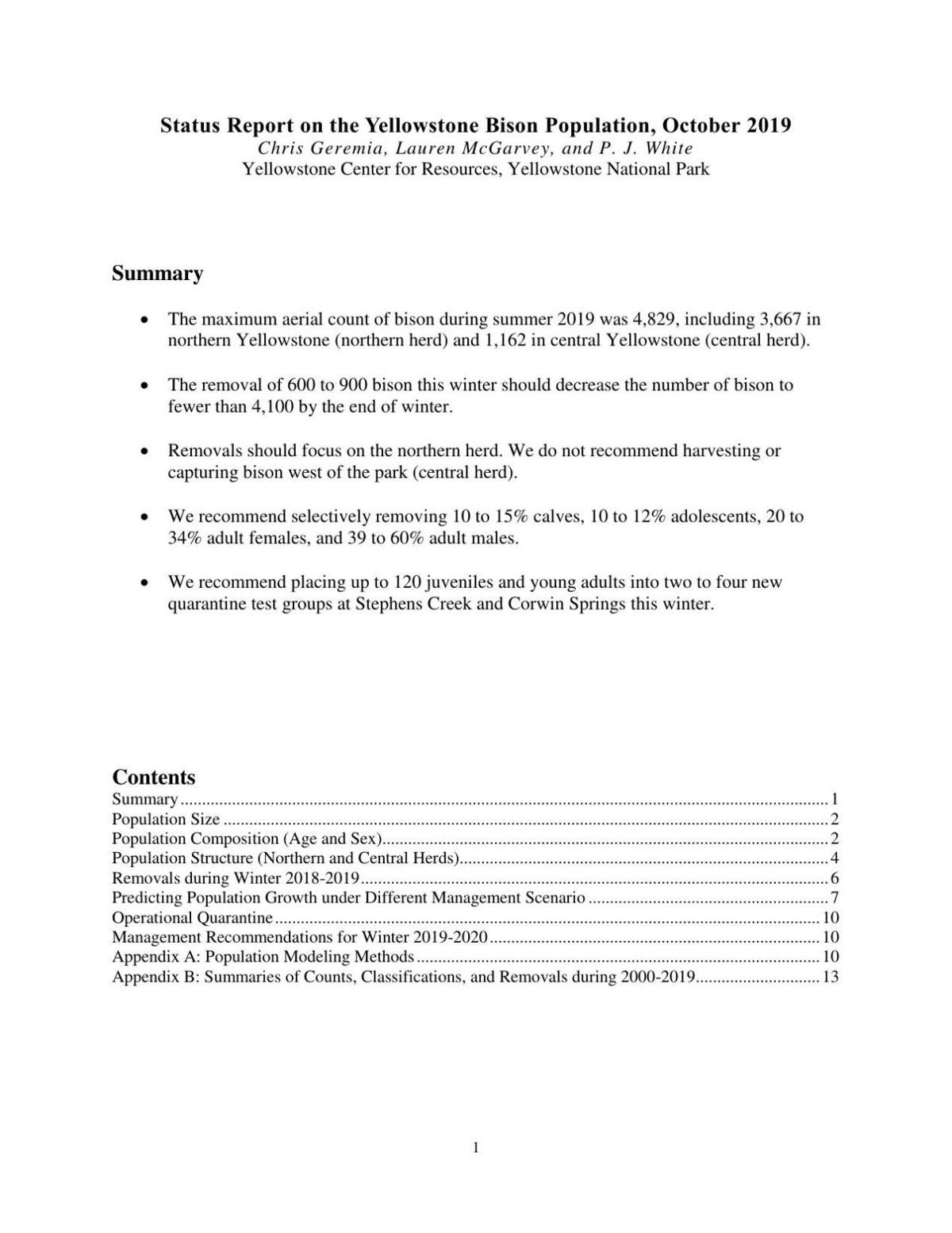 Buffalo Field Campaign has long opposed the organized slaughter of Yellowstone’s bison. In an agreement with the state of Montana, the Park Service annually rounds up a portion of the wild animals that migrate out of the park in winter. Those animals are culled with some shipped to slaughter plants where the animals are killed, the meat butchered and dispersed to select American Indian tribes.

Last winter, 460 bison were removed from the population by culling and hunting. Most of the hunting is by American Indian tribes with treaty rights. In its October report the Yellowstone Park said the removal of 600 to 900 bison this winter would reduce the herd to about 4,100 animals. Out of the total removal the agency suggested putting 120 juveniles and young adults in quarantine this winter. Last winter no animals were removed for quarantine because of a lack of facilities to hold the bison.

The park had the same objective for bison removal last year but didn’t hit the target because fewer animals left the park near Gardiner, the area where they are rounded up or hunted just outside the park boundary.

Yellowstone’s bison are split into two populations, the northern and central herds, although there is some exchange. The northern population has been stable or growing with an October count of about 3,600. The central population, which winters along the Madison and Firehole rivers, has shrunk but stabilized at a lower level of 1,100. The makeup of the central herd has concerned the park’s bison biologists.

In its October report the agency noted that central herd contained more males (64%) than females, and a low juvenile population — 20% compared to the northern herd’s 27%.

“Since winter 2013-2014, managers have removed more than 1,233 calves and nearly 800 adolescents (12 to 16 months) from the bison population,” according to the Park Service. “Removing large numbers of calves and adolescents disproportionately reduces the number of animals reaching reproductive maturity.”

The trend has concerned park biologists who can control which animals they send to slaughter, but have no say in which animals hunters may kill.