Yellowstone Caldera Chronicles is a weekly column written by scientists and collaborators of the Yellowstone Volcano Observatory. This week's contribution is from Pat Shanks, research geologist emeritus with the U.S. Geological Survey.

Three main varieties of hot spring fluids are recognized in Yellowstone: alkaline-chloride, acid-sulfate and calcium-carbonate waters. Previous editions of Yellowstone Caldera Chronicles covered the stories behind alkaline-chloride features, like Old Faithful, and acid-sulfate systems, like that at Mud Volcano. Today, we focus on calcium-carbonate hot springs and examine possible sources for the travertine-depositing fluids, like those that are responsible for the amazing terraces at Mammoth Hot Springs.

Studies have shown that calcium-carbonate-rich fluids at and near Mammoth Hot Springs:

• Are meteoric waters (rain or snow) that are heated by contact with hot rocks at depth to temperatures of about 100 degrees Celsius (212 degrees Fahrenheit);

• Circulate through and react with older limestones and sedimentary rocks beneath the surface;

• Occur well outside the Yellowstone caldera and therefore are removed from the main Yellowstone magma chamber beneath the caldera;

• Contain some carbon dioxide and helium gases incorporated from magmatism that occurs between Norris Geyser Basin and Mammoth Hot Springs; and

Samples of hot spring fluids at Mammoth Hot Springs, including from USGS drill hole Y-10, show that measured near-surface temperatures never exceed 73 degrees Celsius (163.4 degrees Fahrenheit), and the chemistry of the water suggests that subsurface fluid temperatures have not exceeded 100 degrees Celsius (212 degrees Fahrenheit). Compared with alkaline-chloride waters, like those from Old Faithful, thermal waters at Mammoth Hot Springs are rich in calcium, magnesium, bicarbonate and sulfate. The bicarbonate comes from two sources: magmatic carbon dioxide and reaction with marine carbonate rocks (limestone), resulting in a slightly acidic fluid pH of about 6. When hot spring fluids emerge from the subsurface into the pools on Mammoth terrace, pressure release causes them to degas (like opening a can of soda), and this loss of carbon dioxide causes the pH to increase to about 8. Calcium carbonate is less soluble at higher pH, causing travertine to precipitate out of the water and forming the famous terraces of Mammoth Hot Springs.

Geologic studies indicate that the most likely rocks to react with the thermal fluids in the subsurface are dolomitic limestones of Mississippian age (about 350 million years old) that are present in a rock unit called the Madison Formation. This formation is well known as an important petroleum-producing unit and aquifer throughout Montana, Wyoming, North Dakota and South Dakota. Detailed studies of rocks in this unit show the most abundant minerals are calcite (CaCO3), dolomite (CaMg[CO3]2), and anhydrite (CaSO4). Minor minerals include feldspars, quartz and clays. Detailed studies of samples typically show evidence that anhydrite and dolomite have been leached by warm waters, and dolomite is often replaced by calcite.

Using geochemical reaction calculations, it is possible to confirm that the Madison Formation is indeed the main contributor to the chemistry of Mammoth Hot Springs water. By assuming a cool 25℃ (75℉) dilute water reacts with dolomite and anhydrite and minor amounts of feldspar minerals at 100℃ (212℉), it becomes clear that most of the dolomite and anhydrite dissolve, and minor amounts of clays and pyrite (also known as fool’s gold) form. The reacted fluid has a pH of 6.2 and a chemical composition similar to the Mammoth Hot Spring waters.

Mammoth travertine deposits and hot spring fluids are very different from the other types of systems in Yellowstone because of the very different geologic setting around Mammoth Hot Springs. This system is still dependent on magmatic heat and gases related to sporadic young volcanic activity along the massive and active tectonic corridor that extends north from the caldera boundary near Norris Geyser Basin to the Mammoth area and beyond. Compared to the hot alkaline-chloride or acid-sulfate fluids within the caldera, however, the Mammoth fluids are relatively cool and react with sedimentary limestones, instead of high-silica rhyolite volcanic rock in and near the caldera.

Thermal features are dangerous, and not all have been photographed diligently throughout the decades. Scientists have developed a kind of 3D photography to accurately capture the features.

Man who guided illegally in Yellowstone gets week in jail

A judge has sentenced an Oklahoma man to a week in jail and ordered him to pay $1,100 for guiding visitors illegally in Yellowstone National Park. 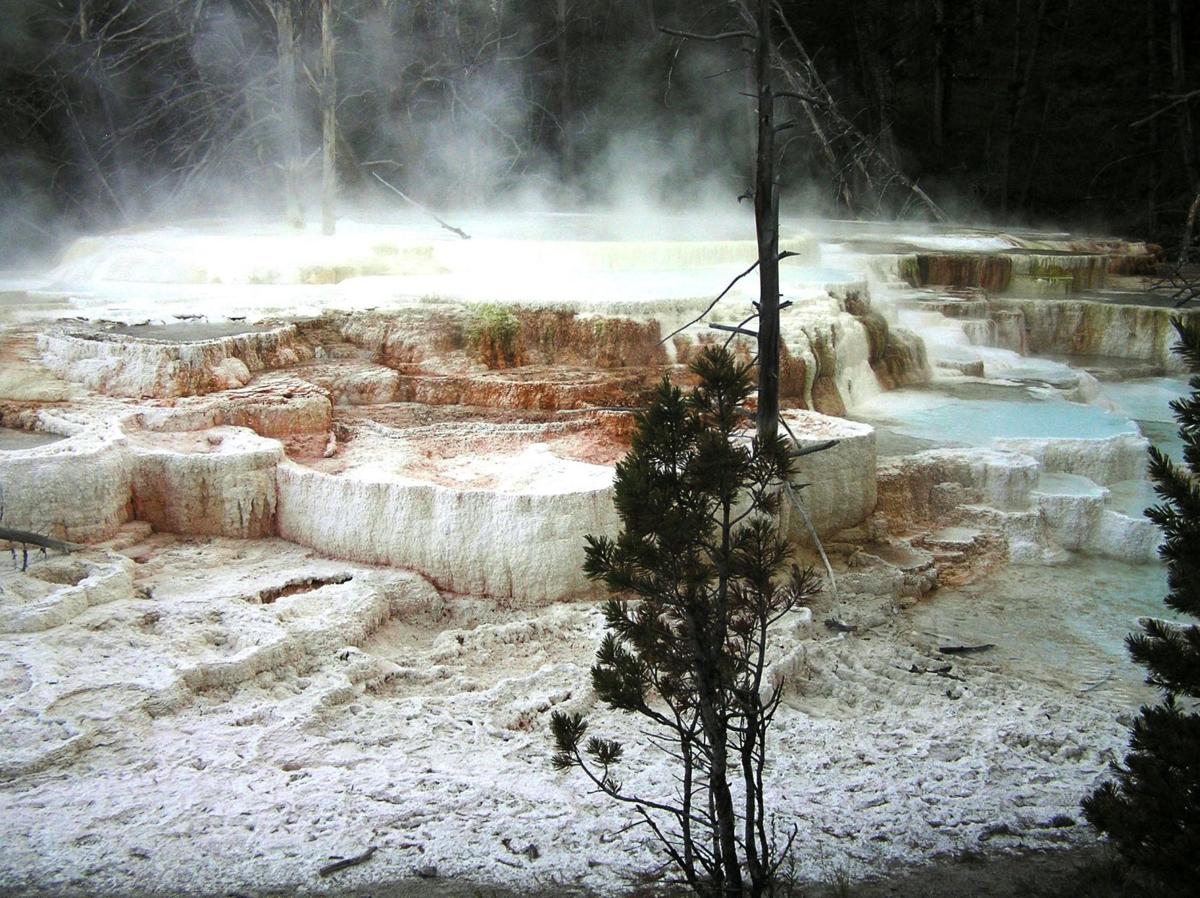 Narrow Gauge Spring, part of Mammoth Hot Springs in Yellowstone National Park, vents between two trees on top of the travertine deposits. Terraced pools form due to deposition of travertine from the fluids as they cool and degas carbon dioxide. 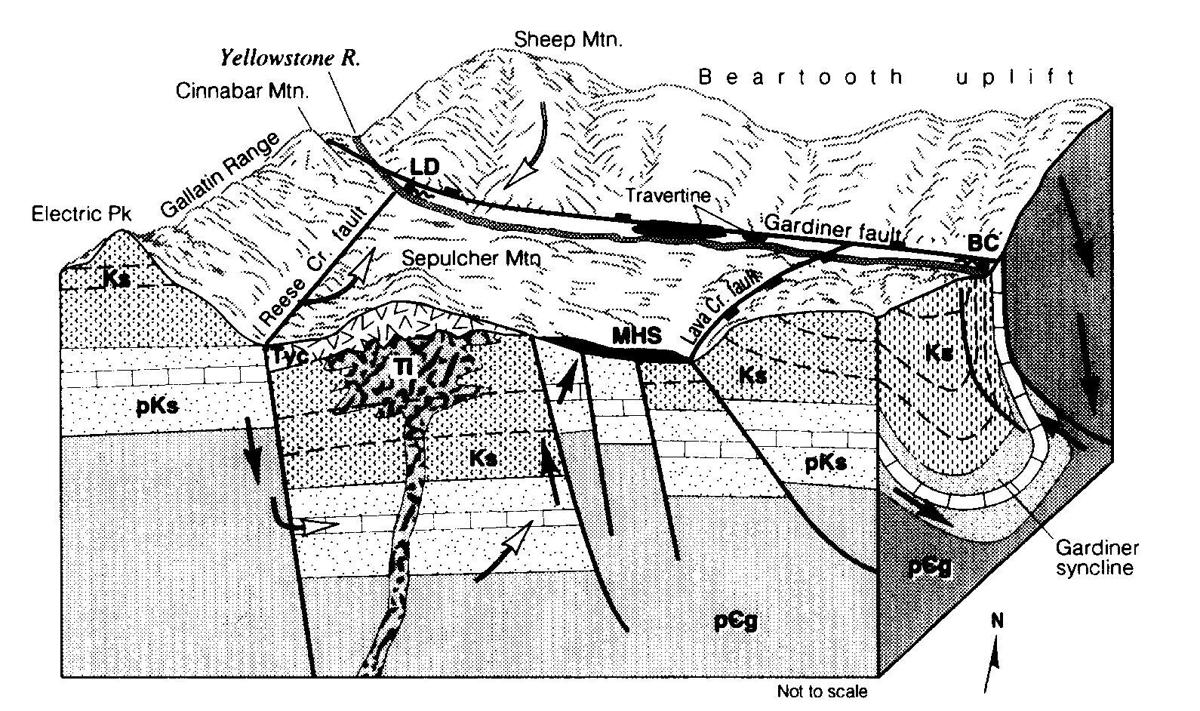