Earlier this year, an issue of Yellowstone Caldera Chronicles reported on the discovery of an emerging thermal area within Yellowstone National Park. The area was identified in thermal infrared satellite imagery as a region of warm ground that was not in the park's database of known thermal features. It is located along the northeast boundary of the Sour Creek dome, near West Tern Lake, and it appears to be an extension of the previously known Tern Lake thermal area.

A review of archived aerial photos taken by the Department of Agriculture revealed that the thermal area was a hillside of healthy trees in the 1990s. We do not know its exact birthday, but satellite images acquired in summer 2001 show the first evidence of trees beginning to die. By 2006, there was an increasingly large zone of dead or dying trees and a measurable thermal anomaly at the surface. By 2009 the ground had the white chalky color that is typical of many other thermal areas in the park.

To better understand the characteristics of the new thermal area, a team of USGS and Yellowstone National Park scientists visited the site last week. They mapped the extent of the area, acquired air- and ground-based thermal infrared and visible imagery, and took the temperature of the subsurface using a handheld thermistor.

There was no water discharging from the new thermal area, but there was an arch-shaped core of warm ground, 70-80 degrees celsius  at the surface, that was covered in fallen trees. This zone was surrounded by cooler ground that was also littered with recently fallen trees. Within the warmest area there were steam emissions from several points, and sulfur crystals lined some of the steaming areas. The ground temperature in these fumaroles was 92°C (198°F) — the boiling temperature at that elevation (about 8,000 feet or 2,500 meters). Throughout this zone, just 5-10 centimeters below the surface, the temperatures were consistently boiling.

These observations raise many questions about the formation and evolution of the thermal area. Was a slug of gas released over a broad area first followed by more localized ground heating, or did surface warming accompany gas discharge? What killed the trees — the gases, or the heat, or both? And why is the vegetation in some areas already recovering?

One hypothesis is that over time, high temperatures were localized around preexisting weak zones underground — for example along existing cracks or other geological structures. This progression is the reason that we see a broad area of tree kill now, but boiling temperatures only in the core of the new thermal area.

While in this region of the park the research team also took the opportunity to visit other thermal areas that have long been known but are seldom visited due to their remote location. Mud pots, hot spring pools, and boiling fumaroles characterized these thermal areas, but there were also zones that have clearly cooled down over time. These areas contain the telltale white hydrothermal mineral deposits, but no longer have elevated temperatures, gases, or hot springs, and young trees are growing.

"Dynamic" is the name of the game in Yellowstone, especially when it comes to thermal features which can change rapidly. Sometimes they heat up, like the Norris Geyser Basin did in 2003, and at other times they cool down, which is evident from the countless "dead" thermal areas — places of altered whitish ground but without elevated temperatures or discharge of gas or water. The appearance of the new feature near West Tern Lake is not an indication of heightened volcanic activity, but rather is part of the life cycle of Yellowstone's dynamic hydrothermal systems.

We have been lucky to witness the birth of a brand new thermal area, and to have been able to visit it and collect data and observations early in its life. Stay tuned to future issues of Yellowstone Caldera Chronicles to stay up to date as the data collected last week are further analyzed and new observations are made.

What caused Yellowstone's past eruptions, and how do we know?

How the largest earthquake in the region affected Yellowstone National Park

Yellowstone National Park, known for its volcanic landscape, has an icy past

A half-acre fire burning on the eastern shore of Yellowstone Lake was detected Monday.

Portions of the Upper Gibbon River in Yellowstone National Park will be closed to angling Sept. 2-13 as fisheries personnel work to remove non…

How many thermal features are in Yellowstone?

A man suffered burns to much of his body after falling into a hot spring near Old Faithful on Sunday. 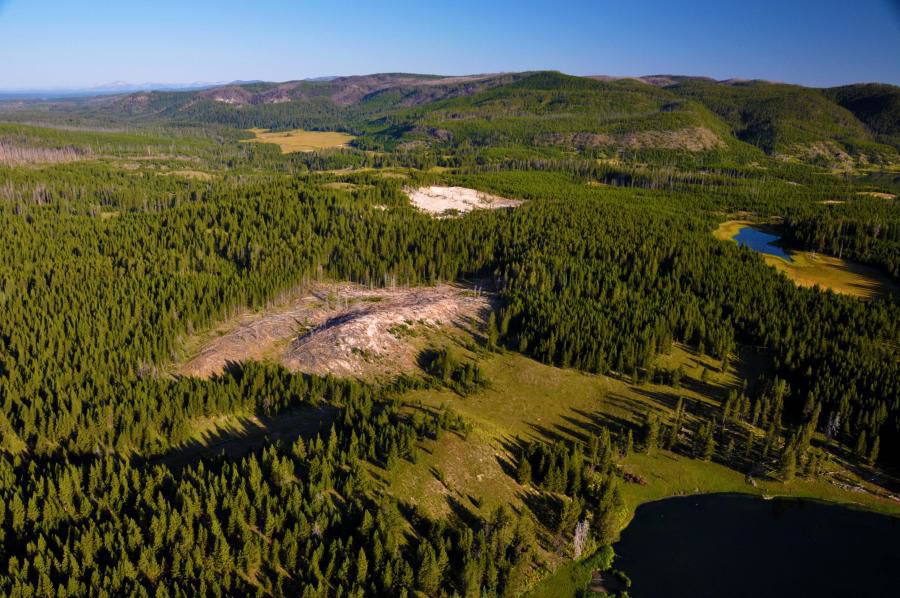 An aerial view shows the new thermal area, in the center left. The existing Tern Lake thermal area is the bright white patch of ground in the upper middle part of the image. West Tern Lake is in the lower right.

An aerial view shows the new extension of the Tern Lake thermal area looking southwest. Note the steam in the central part of the image. At right, a FLIR (Forward Looking InfraRed) image of the thermal area, with the field of view indicated by the red box in the visible aerial view. The warmest areas are bright white/yellow, while cooler areas are purple.