Yellowstone Caldera Chronicles is a weekly column written by scientists and collaborators of the Yellowstone Volcano Observatory. This week's contribution is from Zach Lifton, geologist with the Idaho Geological Survey.

The Yellowstone hotspot left behind a trail of distinct volcanic deposits across southern Idaho. Eruptive centers migrated northeast along the hotspot track as the North American tectonic plate moved southwest over the hotspot.

Early eruptions produced rhyolite, a light-colored volcanic rock that has a high concentration of silica (quartz), in large caldera-forming eruptions. These eruptions often produce airborne ash which falls to the ground and fuses together into a rock called a tuff — deposits that can be found today exposed at the surface along the edges of the Eastern Snake River Plain.

Later phases of Yellowstone hotspot eruptions produced basalt, a dark-colored volcanic rock that has relatively low concentration of silica. Basalt tends to erupt as lava flows, similar to what can be seen today in Hawaii. These lava flows can travel long distances and fill in low topography, leaving flat volcanic plains.

The Eastern Snake River Plain is covered in such basalt flows. Most of the basalt erupted by the Yellowstone hotspot is contained in the low-elevation depression formed as the crust of the tectonic plate moved over the hotspot. However, some of these lava flows, such as the Blackfoot Volcanic Field, are located well outside the hotspot track.

The Blackfoot Volcanic Field is a relatively young (less than about 1 million years old) volcanic field located around Blackfoot Reservoir, north of Soda Springs, Idaho. It consists of basalt flows that filled in the floors of Gem Valley, the Blackfoot Reservoir basin, Willow Creek drainage, and several other smaller valleys.

This volcanic field is far from the edge of the Eastern Snake River Plain, which is up to 50 miles away, but the chemical composition of the basalt lava flows from the two locations are very similar. The Blackfoot Volcanic Field is therefore likely related to the Yellowstone hotspot via complex heat transfer away from the main hotspot track.

The Blackfoot Volcanic Field also contains several rhyolite domes, which form when rhyolite lava erupts nonexplosively. While basalt’s low viscosity causes it to ooze out of the ground and flow long distances, rhyolite has high viscosity and tends to pile up in tall, steep-sided mounds.

Three rhyolite domes (China Hat, China Cap, and North Cone) erupted in the middle of the Blackfoot Volcanic Field. These rhyolite domes are only about 58,000 years old, much younger than the basalt flows that they erupted through. The rhyolite comes from the same magma source as the basalt but has evolved chemically due to the crystallization of basalt magma over time.

Perhaps the most striking thing about the Blackfoot Volcanic Field is that it is cut by dozens of young fault scarps — breaks in the ground surface caused by movement along a fault plane. The faults are younger than the basalt because the faults cut the basalt, but the same age or slightly younger than the rhyolite domes because the domes either cover fault scarps or are offset only a small amount. Thus, we know that the faulting probably occurred before 58,000 years ago, with perhaps some minor fault movement since then.

The origin of the Blackfoot Volcanic Field faults is not clear. The region is part of the Basin and Range Province, which is characterized by young, active faults that accommodate east-west extension of the crust.

Because volcanic activity and tectonic fault activity occurred simultaneously in the area of the Blackfoot Volcanic Field, it is difficult to determine which is the driving force. Did volcanic activity cause rifting and faulting at the surface, or did faulting thin the crust and facilitate volcanic eruptions? And is the Blackfoot Volcanic Field still capable of eruptions, or is the field extinct?

Further research will help solve these questions, and Idaho Geological Survey scientists are on the case — stay tuned as we continue to investigate this fascinating corner of Idaho.

Caldera chronicles: How big was that earthquake?

Earthquake magnitudes may seem straightforward, but a lot goes into their calculation, and multiple methods can be used. These methods must account for many complications, like the impacts of local geology on the amplitude of shaking. In Yellowstone, a modern seismic network and experienced analysts make it possible to determine the magnitudes of even the smallest earthquakes.

Yellowstone National Park will open for its snow season at 8 a.m. on Tuesday, Dec. 15.

Have you noticed there has been an increase in the number of earthquakes happening in Yellowstone National Park over the last week? This is because there is an active earthquake swarm occurring beneath Yellowstone Lake. Although it looks impressive, it pales in comparison to past sequences, including the 2008–2009 Yellowstone Lake swarm.

Yellowstone National Park is known for its unique hydrothermal features and array of animals and plants, but what about its fossils? From tiny invertebrates to large marine reptiles, Yellowstone’s boundaries include a wide range of paleontological resources that date back more than 500 million years.

Caldera chronicles: Scientific drilling in Yellowstone looks beneath the surface

Geology is inherently a three-dimensional science — it’s not just about what is at the surface, but what is beneath the surface, as well. This is especially true at Yellowstone National Park, where complex geology controls subsurface geyser plumbing systems. Fortunately, a long history of scientific drilling has pulled back the curtain on this hidden world. 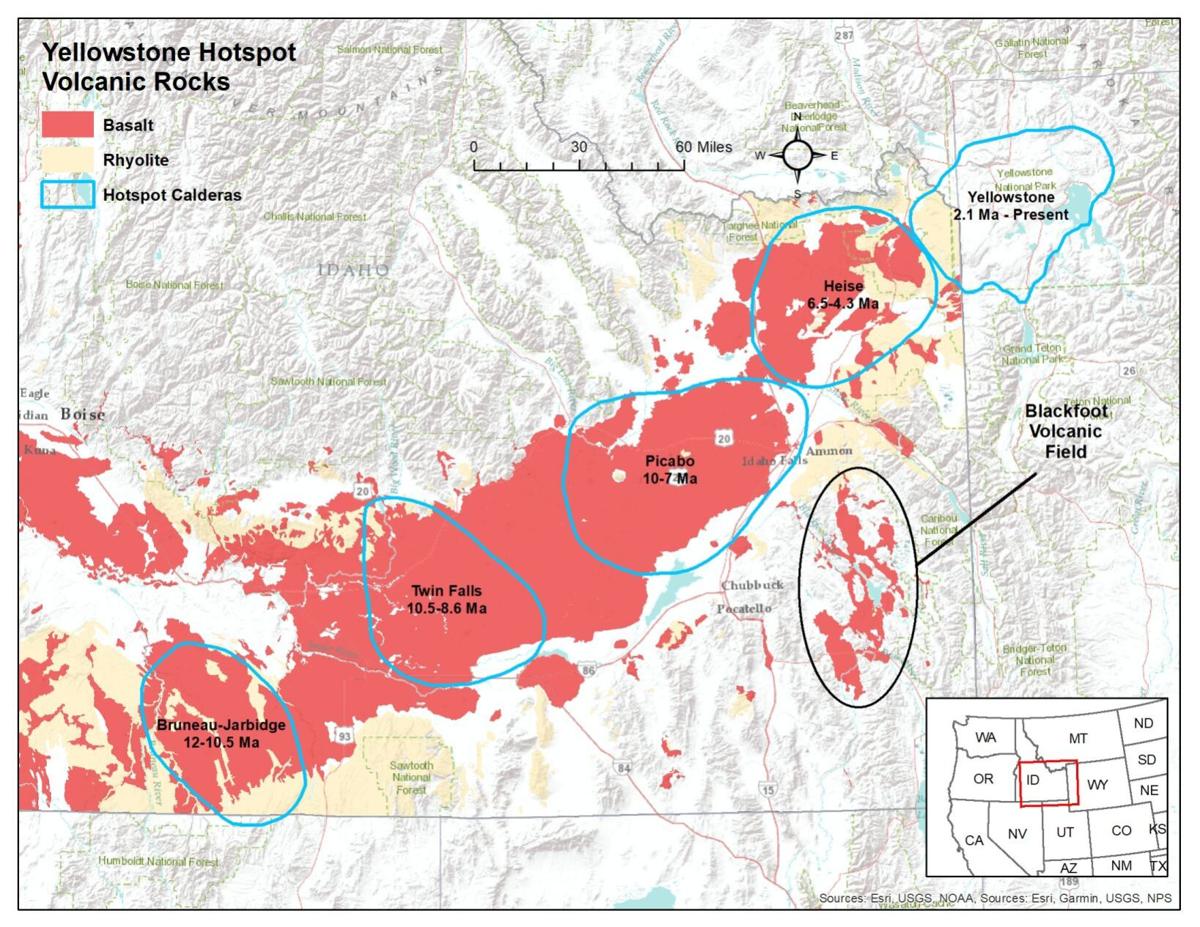 This map of southeastern Idaho shows volcanic rocks related to the Yellowstone hotspot. Basalt is shown in red and rhyolite in yellow. Blue circles indicate the location of past Yellowstone calderas; caldera names and approximate ages are shown in Ma = million years old. 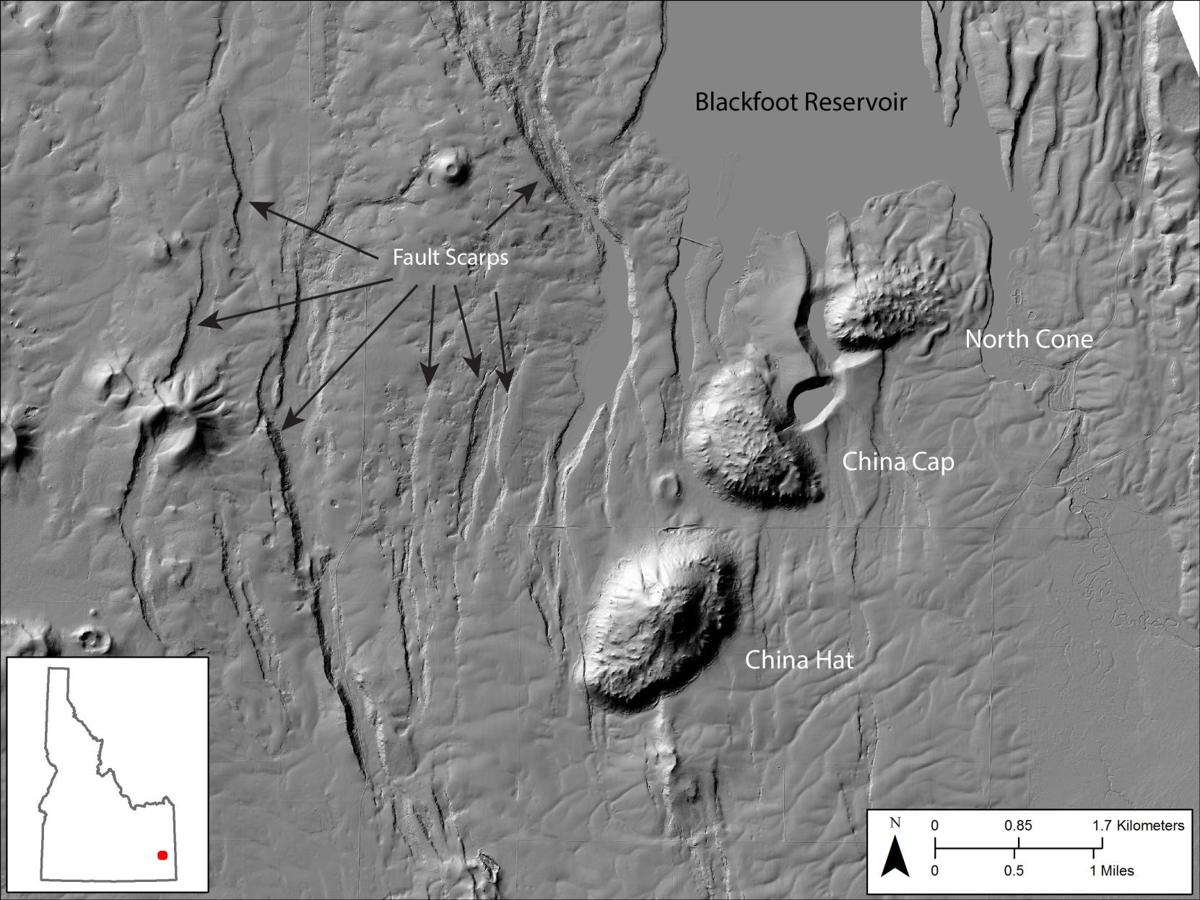