Panoramic photo of Pocket Basin, a hydrothermal explosion crater in Yellowstone National Park's Lower Geyser Basin, taken from the northeast rim looking southwest into the crater. Pocket Basin is a U-shaped crater that is dissected on the SW edge by the Firehole River, visible on the far-right of the photo. 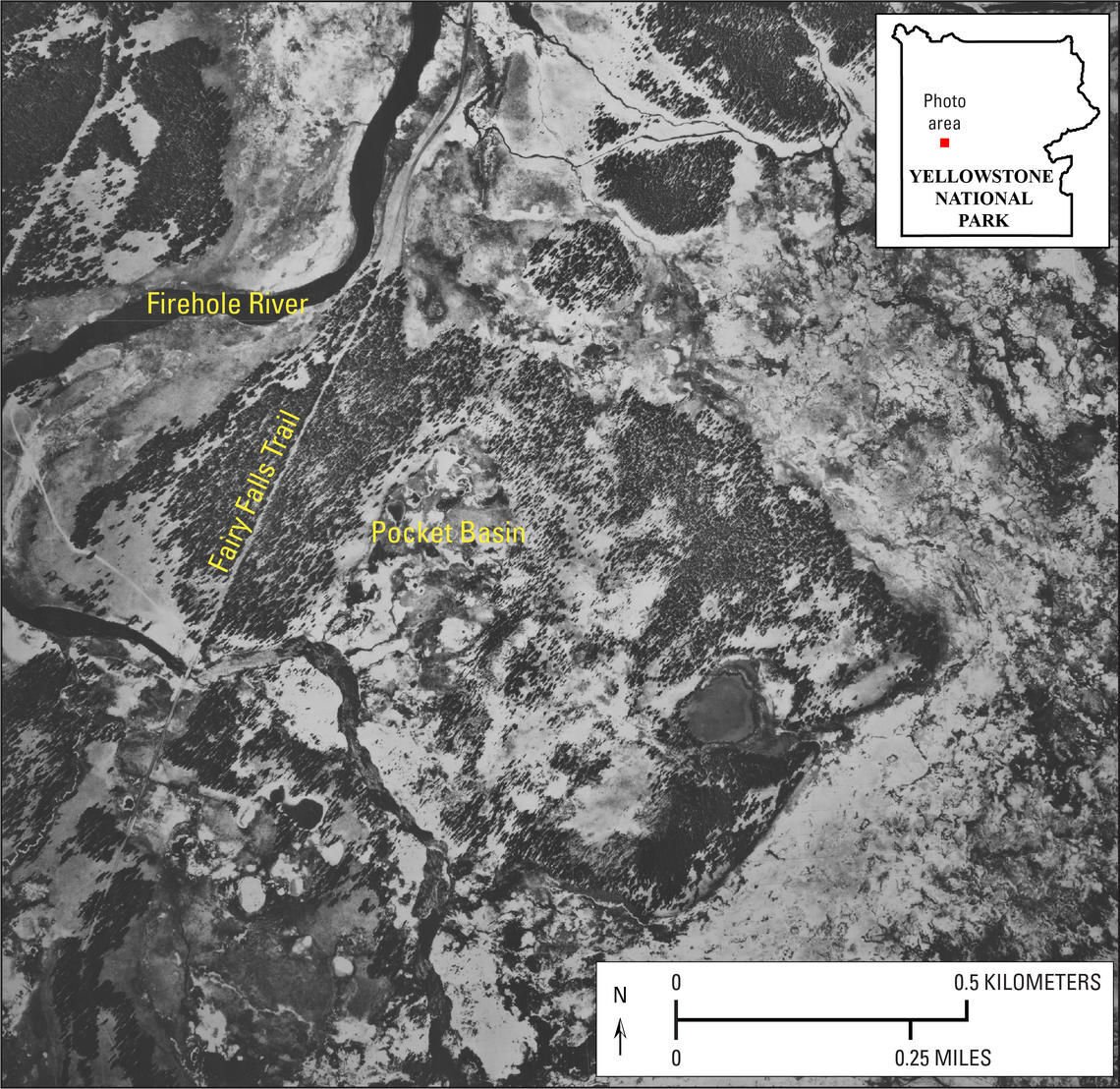 This orthophoto of Pocket Basin, a hydrothermal explosion crater in Yellowstone National Park's Lower Geyser Basin, was created from aerial photos taken in 1965 that were corrected to have uniform scale for use in geologic mapping.

Yellowstone Caldera Chronicles is a weekly column written by scientists and collaborators of the Yellowstone Volcano Observatory. This week's contribution is from Dakota Churchill, contractor with the USGS and student at UC Berkeley.

In the 1960s and 70s, a group of USGS Geological survey scientists began to tackle the challenge of mapping Yellowstone.  The team included Bob Christensen, Don White, Robert Fournier, Alfred Truesdell, and L.J. Patrick Muffler, and they spent every summer between 1966 and 1971 doing fieldwork in Yellowstone. This was a huge undertaking, as the entire park is just under 3,500 square miles—about the size of Puerto Rico. As a result, the mapping was broken down into subsections, often falling along the lines of the different thermal basins. One of these areas was the Lower Geyser Basin. It is the second-largest geyser basin in Yellowstone, spanning just about 18 square miles, and the location of approximately 100 major thermal features.

To aid with mapping the Lower Geyser Basin, photos taken by airplane in 1965 were merged, orthorectified to a uniform scale, and printed on multiple 15 by 15-inch sheets. This was in the days long before Google Earth, when black-and-white air photos were exceptionally valuable resources for geologists!  Clear plastic was laid over these images so that the scientists could draw directly on top of the orthophotos to keep track of their observations. Within the Lower Geyser Basin, there is a smaller hydrothermal area known as Pocket Basin. This basin was mapped in the same way, and it was done almost entirely by Patrick Muffler, who believed the Basin to be a hydrothermal explosion crater—a result of a large phreatic explosion, and thus important for understanding hydrothermal processes and hazards in the park.

These efforts helped lead to the publication of an article in GSA Bulletin on hydrothermal explosion craters. They also led to the production of many maps, such as the geologic map of the Lower Geyser Basin, which was published in physical format in 1982 as USGS Miscellaneous Investigations Series Map I-1373. Unfortunately, despite being compiled in 1979 by A.L. Cook, the detailed Pocket Basin geologic map was never published in any form on its own.

Today, geologic mapping is done digitally and is easily accessible in a Geographic Information Systems (GIS) database, like the Geology of Yellowstone map, which is made possible by the Wyoming State Geological Survey.  But what of the old paper maps, made before digital mapping was possible?  It is critical that these maps are preserved and digitized, so that the information we have gained in years past remains accessible to all. A part of that effort is to convert older printed maps, as well as unpublished field mapping and observations, into digital GIS database products. In 2020, the geologic maps of the Lower Geyser Basin and Pocket Basin were targeted as ones that needed to be properly digitized. The Lower Geyser Basin had previously been digitized in 2012, but its format was outdated; Pocket Basin, in contrast, remained only in paper format.

To understand the conversion of a printed map to a digital format, it helps to have a general understanding of how geologists map. When out in the field, geologists look for outcrops of bedrock, and try to put together their stratigraphy in order to understand when and how each was deposited. All the different types of bedrock found within the extent of a mapping area make up the geologic units. If geologists can find the location where one geologic unit makes contact with another, then this contact is “certain”, and it is shown as a solid line on a map. However, in many places geology can be obscured. For example, if a thick layer of alluvium or soil covers the ground, there is no way to know exactly what rock unit lies beneath it by just looking. So, sometimes, geologists must infer rock units or the location of contacts. On a map, an inferred contact appears as a dashed line. Geologists can get additional information from the rock outcrops by measuring their orientations. This can expose if a rock was rotated, folded, or even sometimes flipped upside-down since the time when it was deposited. Information such as this is often put into a table within the database.

The transfer from a physical map to a digital one requires many steps, and must be done by a geologist who understands how geological mapping works, so that the old notes and maps can be properly interpreted.  As of early 2021, the digital versions of both the Lower Geyser Basin and Pocket Basin geologic maps have been largely completed and will soon be reviewed by other scientists, who will identify any remaining errors or missing information.  We hope that later this year the maps will join the ranks of digitized maps that have aided in our understanding of Yellowstone’s geology.  The maps may have been created decades ago, but they are no less valuable today.  Making them available digitally will ensure their use by a new generation of geologists and mappers, who will build on these results to add to the geologic story of Yellowstone.

Yellowstone officials are considering the removal of the park’s aging telecommunication system and replacing it with an underground fiber optic line.

Steamboat Geyser has been wowing visitors to Yellowstone National Park since March 2018. Seismic studies of the geyser and nearby Cistern Spring are now revealing details of the hydrothermal plumbing system that would not otherwise be known, possibly explaining why the geyser eruptions are the tallest in the world.

Volcanoes in Iceland, Italy and Guatemala have put on displays that are captivating audiences worldwide. But did you know that the same sort of activity could also occur in the southwestern United States?

Panoramic photo of Pocket Basin, a hydrothermal explosion crater in Yellowstone National Park's Lower Geyser Basin, taken from the northeast rim looking southwest into the crater. Pocket Basin is a U-shaped crater that is dissected on the SW edge by the Firehole River, visible on the far-right of the photo.

This orthophoto of Pocket Basin, a hydrothermal explosion crater in Yellowstone National Park's Lower Geyser Basin, was created from aerial photos taken in 1965 that were corrected to have uniform scale for use in geologic mapping.