First, there was the March 18, 2020, magnitude 5.7 (M5.7) earthquake near Salt Lake City. Then there was the M6.5 earthquake in central Idaho on March 31. What's with all of these quakes? And will they affect Yellowstone?

These questions dominated the Internet, especially after the Idaho event. We see spikes in questions about Yellowstone erupting every time there is an earthquake in the western United States — like after the July 5, 2019, M7.1 Ridgecrest, California, earthquake. Remember that?

Strong earthquakes are a way of life in the West. Since 1900 there have been about 20 M6 or greater earthquakes in the region outside California. This includes such events as the 1983 M6.9 Borah Peak, Idaho, earthquake, and the 1959 M7.3 Hebgen Lake earthquake. The latter cost the lives of 29 people, many of whom died when a landslide struck a campground in Madison River Canyon.

M5 events happen throughout the region almost annually. For example, the recent earthquake near Salt Lake City and M5+ earthquakes in 2017 near Soda Springs, Idaho, and Lincoln. All of these strong events are followed by sequences of aftershocks that can last years. These aftershocks can be forecast, to a large extent, because they decay slowly over time following an expected pattern. Some "swarms" of earthquakes occur in the region as fault slip occurs gradually. The ongoing sequence of M3-4 events near Manhattan (west of Bozeman) is a good example.

The western United States is very active tectonically. This includes not only the boundaries between tectonic plates in California, Oregon, and Washington, but also what is known as the "Basin and Range" province. That's the terrane (a fault-bounded area or region with a distinctive stratigraphy, structure, and geological history) of alternating mountains and valleys that runs from the Sierra Nevada mountains in the west to the Wasatch and Teton mountains in the east, and from central Idaho and southwest Montana into Mexico.

The Basin and Range is a zone of tectonic extension. Since about 20 million years ago the crust in this area has stretched in an east-west direction, causing the mountains to rise and the valleys to fall (there are some neat maps and animations of this process at https://www.iris.edu/hq/inclass/animation/basin__range_structural_evolution. At the base of every mountain range is a fault — the boundary between the basins and the ranges. And when these faults slip, you get earthquakes.

This extension does have implications for volcanism. Because of the stretching, the crust within the Basin and Range is relatively thin, allowing the mantle beneath the Basin and Range to rise, decompress, and melt. If this melt reaches the surface, a volcano forms. An example of this type of volcanism is the Black Rock Desert volcanic field in Utah. More evidence of the higher heat flow in the Basin and Range are the numerous hot springs throughout the region, many of which lie along the bases of mountain ranges where hot water rises along the range-front faults.

Historically, much of the earthquake activity in the Basin and Range has focused on the edges — namely western Nevada, central Utah, western Wyoming and Montana, and central Idaho. This is reflected in the overall long-term seismic hazard maps of the United States. But other areas of the Basin and Range are not immune to strong shaking. For example, on February 21, 2008, a M5.9 earthquake shook the area near Wells, in northeastern Nevada.

Do these earthquakes impact Yellowstone? Some do, but only in terms of hydrothermal behaviors — geysers and hot springs. After the 1959 M7.3 Hebgen Lake event — the largest earthquake ever recorded in the Rocky Mountains — at least 289 springs along the Firehole River erupted as geysers, and of these, 160 had no previous record of eruption. Earthquake shaking can also impact the eruption intervals of some geysers. For example, in the months following the 1983 M6.9 Borah Peak earthquake, the average interval between eruptions of Old Faithful increased by almost 10 minutes.

These effects are probably a result of the breakdown of fragile geyser and hot spring plumbing systems caused by ground shaking. In addition, there is a chance that large earthquakes in the Basin and Range (and throughout the world) can trigger small earthquakes in Yellowstone as the resulting seismic waves pass through. These triggered events tend to be very small, with magnitudes less than or equal to one.

These earthquakes, however, do not cause volcanic eruptions at Yellowstone. The last time magma reached the surface there was a lava flow about 70,000 years ago. Since that time, there must have been more than 10,000 M6+ events in the Basin and Range. None of those triggered a volcanic eruption. And there might have been a mind-boggling 100,000 M6+ events in the Basin and Range since the major explosion that formed Yellowstone Caldera 631,000 years ago.

And the next time someone tells you that one of these earthquakes — which are bound to happen again in the future — is going to cause Yellowstone to erupt, you can explain what's really going on.

Caldera chronicles: The origin story for the Yellowstone Volcano Observatory 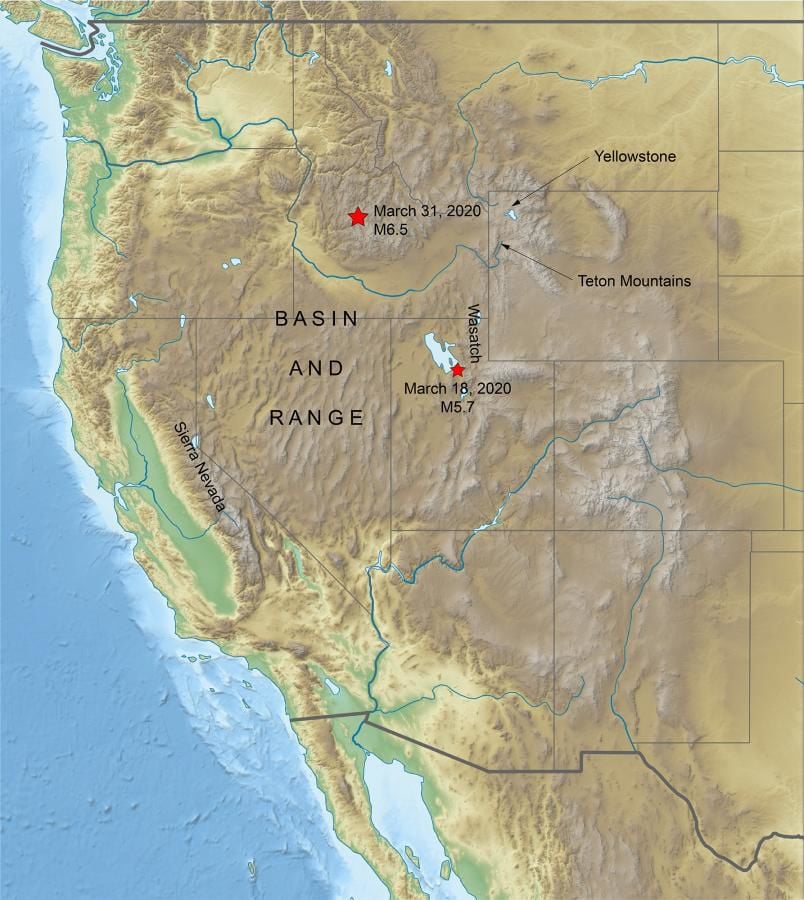 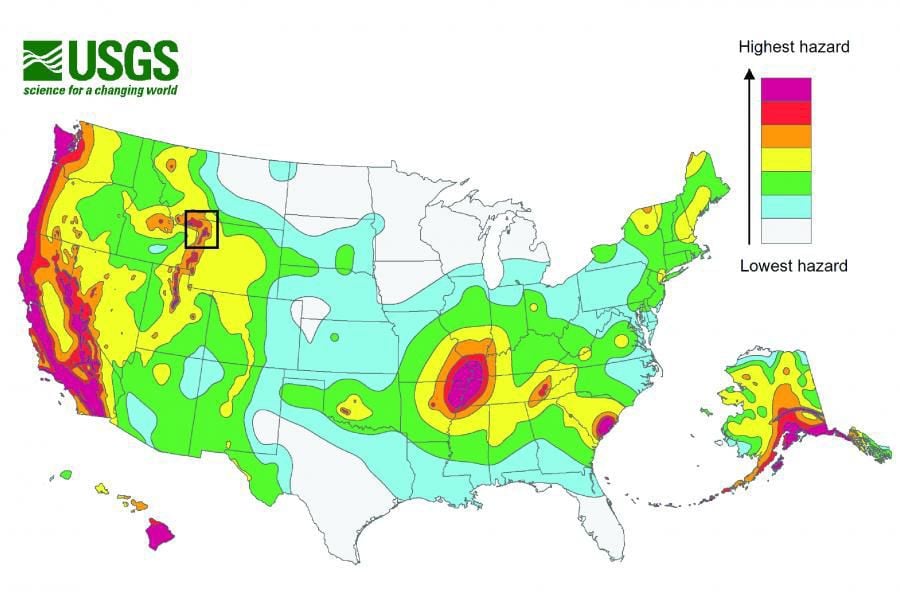 This earthquake hazard map shows peak ground accelerations having a 2% probability of being exceeded in 50 years, for a firm rock site. Black box outlines Yellowstone region. The map is based on the most recent USGS models for the conterminous U.S. (2018), Hawaii (1998), and Alaska (2007). The models are based on seismicity and fault-slip rates, and take into account the frequency of earthquakes of various magnitudes. Locally, the hazard may be greater than shown, because site geology may amplify ground motions. 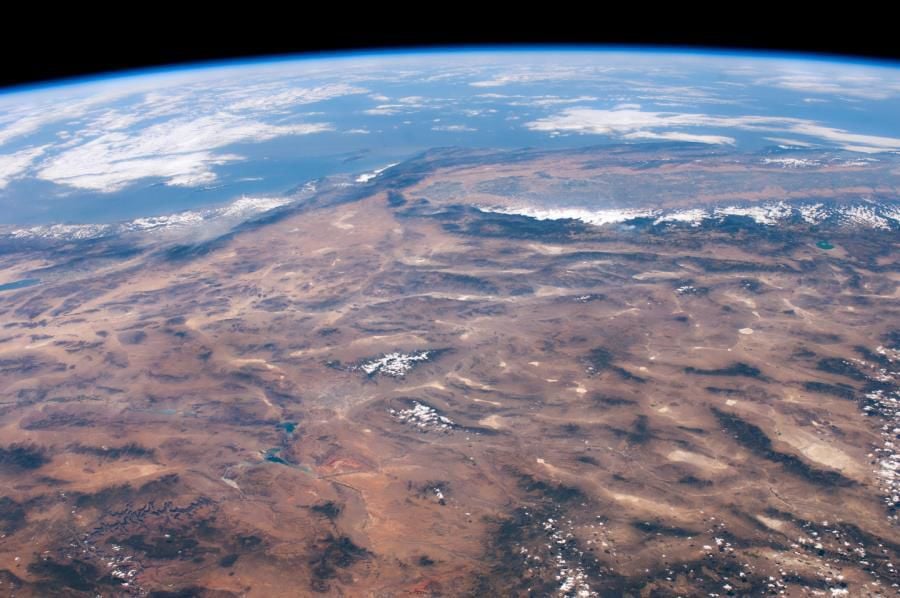 This view looks east across the southwestern United States, including Nevada, Arizona, and California, taken from the International Space Station. The Basin and Range province dominates the bottom half of the photo.