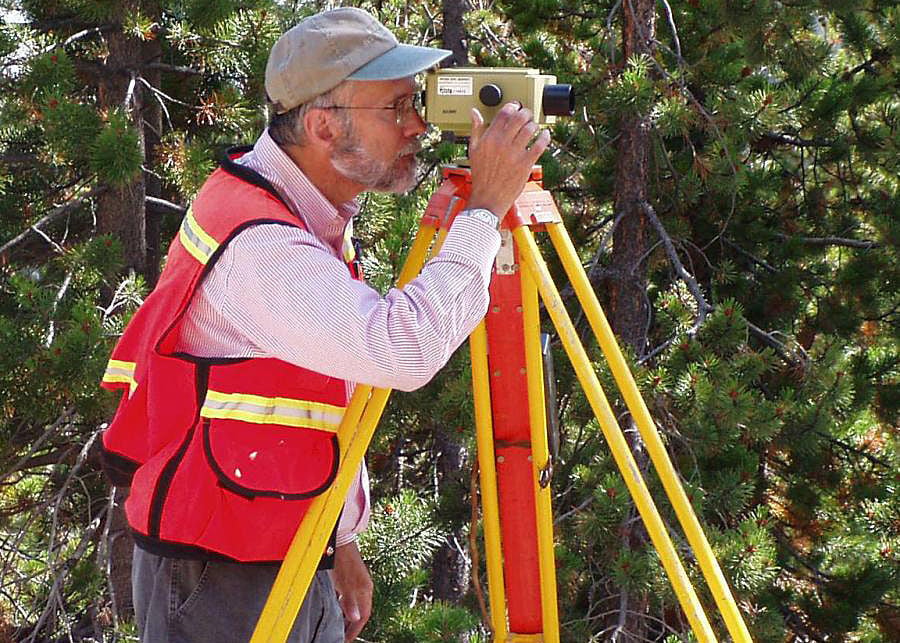 Dan Dzurisin, of the Cascades Volcano Observatory, conducts a leveling survey at Newberry Volcano, Oregon, in 2002. 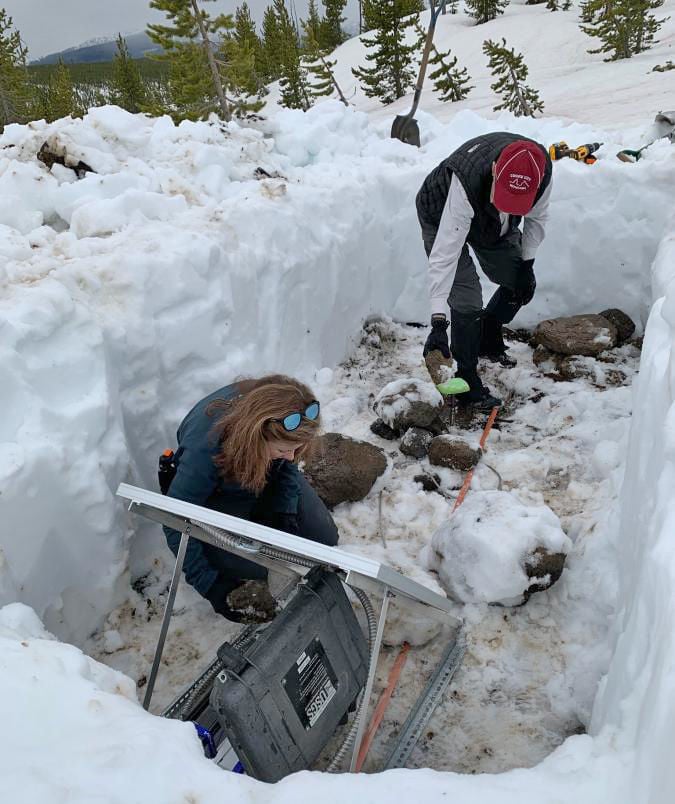 But how do we know about this ground deformation? Past issues of Yellowstone Caldera Chronicles have discussed some of the measurement techniques that have been used to measure the ups and downs, like leveling, the Global Positioning System (GPS) — both continuous and semipermanent — and Interferometric Synthetic Aperture Radar (InSAR). Today, we'll pay homage to one of the scientists who made these discoveries: Daniel Dzurisin, who retired at the end of the week after more than 43 years of service.

Dan Dzurisin, or "DZ" as he is known to his friends and colleagues, grew up in Illinois and obtained a degree in physics from the University of Notre Dame — a fact of which he is intensely proud. During his masters and doctoral degrees at the California Institute of Technology, his emphasis was planetary science, but a field trip to the Island of Hawaii exposed him to the study of active volcanoes. The landscape of Kilauea Volcano captivated him, and in 1976 he landed a position at the Hawaiian Volcano Observatory.

While in Hawaii, DZ focused on a variety of topics, including the geology of the caldera, explosive deposits from past Kilauea eruptions, and how magmatic activity beneath the ground causes surface deformation and even gravity change. In 1980, he was part of the response to the reawakening of Mount St. Helens, aiding with measuring deformation of the volcano. He was not there for the May 18 eruption, however — he had to return to Hawaii for the birth of his son.

In 1981 DZ, wife Linda, and son Jason moved to Vancouver, Washington, where he joined the staff of the brand new Cascades Volcano Observatory. He spent a great deal of time during the subsequent years working on Mount St. Helens, frequently collecting deformation measurements from within the crater and helping to predict small lava dome eruptions. He also began thinking big — caldera big.

The early 1980s were not only a time of unrest at Mount St. Helens, but also at Long Valley caldera in eastern California, where uplift and a series of strong earthquakes had been recorded. DZ began investigating calderas worldwide, and he was especially interested in Yellowstone. A study made in the 1970s by University of Utah professor Robert Smith — one of the founding members of the Yellowstone Volcano Observatory — suggested that the caldera had uplifted by about 72 centimeters (28 inches) between the 1920s and 1970s. DZ wondered if that uplift was continuing, so he did what any good scientist would do. He went out and measured it.

In 1983 DZ initiated the first of a series of annual leveling surveys to Yellowstone, measuring elevations over the Sour Creek resurgent dome, near Hayden Valley and in the vicinity of Yellowstone Lake. The 1983 and 1984 surveys confirmed that uplift was continuing, but the 1985 survey revealed no deformation, and by 1986 it was clear that the caldera was subsiding. The subsidence continued until 1995, when the deformation switched back to uplift.

As technology evolved, so did DZ's work — he and his collaborators began to apply GPS and InSAR to better understand the ups and downs of Yellowstone, learning that the two resurgent domes sometimes deform in concert, and sometimes opposite one another. The Norris Geyser Basin area also deforms, often in a way that is totally independent from the caldera. To explain these variations in time and space DZ suggested an interplay between deep magmatic activity and shallower hydrothermal pressurization and depressurization. This conceptual model is now widely applied to other calderas around the world. All of DZ's work is summarized in a 2012 USGS Professional Paper: "History of Surface Displacements at the Yellowstone Caldera, Wyoming."

In addition to his research on Yellowstone, Mount St. Helens (including the 2004-2008 eruption), and many other volcanoes, DZ served as the scientist-in-charge of the Cascades Volcano Observatory during 1994-1997. He also literally wrote the book on volcano deformation — "Volcano Deformation: Geodetic Monitoring Techniques" was published in 2007 and was the first-ever book dedicated to the subject.

Throughout his career, DZ has served as a mentor to generations of aspiring volcanologists. Many of the students who volunteered to serve on his Yellowstone leveling crews are now professional scientists, and he has always been generous with his time, energy, and wisdom. In his off hours, DZ takes professional-quality wildlife photographs. You may have seen some of his photos on brochures and websites related to Yellowstone National Park.

While this phase of DZ's career is ending, we know this is not goodbye — he is planning on returning as an emeritus scientist to continue his Yellowstone research.

What's in a name? The misadventures of Truman Everts