Yellowstone Caldera Chronicles is a weekly column written by scientists and collaborators of the Yellowstone Volcano Observatory. This week's contribution is from Jess Condon, Research Experiences for Undergraduates student, and Madison Myers, assistant professor of Igneous Processes, both at Montana State University.

These eruptions each left a thick deposit of ash called an ignimbrite, which also contains crystals and gas. When the ash, gas and crystals were emplaced, the deposit was so hot that it “welded” into incredibly dense and hard rock. These ash deposits are also known as tuff.

The tuffs from the Huckleberry Ridge, Henrys Fork and Yellowstone eruptions are well known and get a lot of attention; however, Yellowstone hosts a few more tuffs that, while smaller in volume, are still noteworthy.

Throughout Yellowstone’s history there have been many ‘smaller’ volcanic eruptions (if one considers an eruption 50 times the size of Mount St. Helens small!) that most people drive by without a second thought. So today, let’s highlight these underloved tuffs of Yellowstone, including the tuff of Lost Creek (about 50 million years old), the tuff of Sulphur Creek (480,000 years old), and the tuff of Bluff Point (170,000 years old).

Before we get into these tuff units, we should first address: what exactly is a tuff? A tuff is the term for rock that is formed from ash, crystals and other volcanic debris and that is emplaced during explosive volcanic eruptions. This hot mixture can fall from eruption plumes, blanketing the landscape, and can also form from ground-hugging flows of ash that move upwards of 80 kilometers an hour (50 mph). If the flow is sufficiently hot and thick, it tends to stew in its hot gases, compacting and cementing together. The hotter and thicker the flow, the harder the resulting rock.

Now, on to our under-appreciated tuffs. The oldest is the tuff of Lost Creek, which erupted from the Absaroka volcanic range when it was active almost 50 million years ago. This tuff spans the northern part of Yellowstone National Park, extending from the Washburn Range in the east to Sepulcher Mountain in the west. At its maximum, the tuff of Lost Creek is 1,000 feet (300 meters) thick, looming in the background of Mammoth Hot Springs (and easily viewed from the Beaver Pond trail). Just like so many of the Absaroka volcanics, this tuff contains petrified wood from trees that died during the eruption 50 million years ago!

Our next two tuffs are much younger, because they formed after the eruption that created Yellowstone Caldera. The tuff of Sulphur Creek is 480,000 years old and is most notable in the Grand Canyon of Yellowstone. It can be seen in the canyon walls where it has been altered by hydrothermal fluids, giving it an iconic red and yellow color. This tuff unit is about 250 feet (75 meters) at its thickest and covers an area of more than 100 km2, and it might have been associated with the eruption of lava flows in the vicinity of the Grand Canyon of Yellowstone.

The last under-appreciated tuff we will review today is, at 170,000 years old, the youngest in Yellowstone National Park. The eruption that deposited the tuff of Bluff Point also resulted in the formation of a 10 kilomter wide, elliptical crater known as the West Thumb Caldera, which was then filled in by Yellowstone Lake. That’s right — West Thumb is the product of a massive explosive eruption more than 50 times bigger that the eruption that occurred at Mount St. Helens in 1980. This tuff has blocks of crystals in a glassy groundmass up to 1 meter in size, and the eruption may have involved interaction with water from an ancestral Yellowstone Lake. Sadly, this tuff was largely covered by subsequent rhyolitic lava flows, but it is still possible to see outcrops of this unit today on the southwest side of West Thumb.

The thicker tuff units from the major caldera-forming events get all of the attention, but it is also important to recognize and appreciate the smaller tuff units in Yellowstone. Let’s give ‘em some love!

What were the major events that shaped the Earth and its environment, and when did these events takes place? When did the major volcanic events in Yellowstone occur within the sequence of Earth’s major events? Geologic research has made significant progress to answer these questions, and future discoveries will further refine the fascinating story.

About 631,000 years ago, a massive eruption formed what today is known as the Yellowstone Caldera. New deposits, discovered within the caldera, are changing our perspective on how that event might have unfolded.

The Blackfoot Volcanic Field in southeast Idaho is a unique product of Yellowstone hotspot volcanism. While it is chemically similar to other volcanic rocks in eastern Idaho that are related to the hotspot, it is located far from the hot spot track — a testament to its entanglement with tectonic activity of the Basin and Range Province. 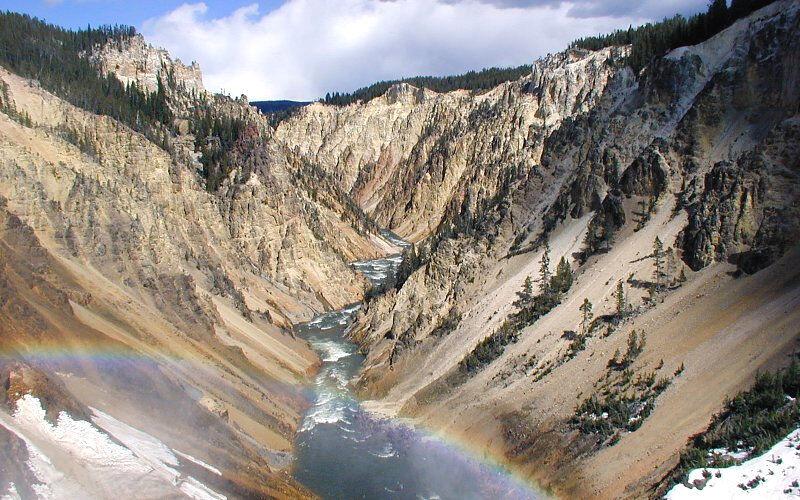 This view of the Grand Canyon of the Yellowstone is from below Lower Falls looking downstream. The splendid yellow-brown walls of the canyon consist predominantly of rhyolite tuff and lava (Sulfur Creek tuff and Canyon flow, respectively), which were erupted nearly 500,000 years ago. Both units have been intensely altered by hydrothermal fluids. 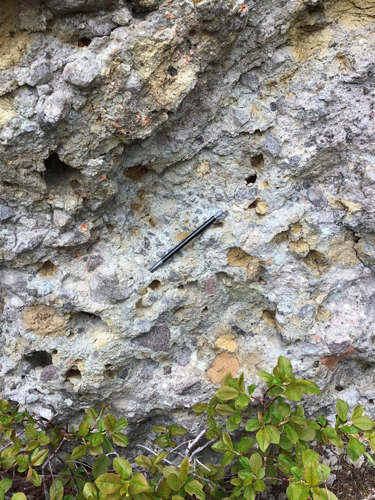 This is an outcrop of the tuff of Lost Creek near Sepulcher Mountain in Yellowstone National Park.