Yellowstone Caldera Chronicles is a weekly column written by scientists and collaborators of the Yellowstone Volcano Observatory. This week's contribution is from Dan Dzurisin, emeritus geologist with the U.S. Geological Survey.

Interpreting ground deformation at Yellowstone and other volcanoes might seem straightforward. After all, they’re volcanoes. Magma comes in, volcano goes up. Magma leaks out, volcano goes down. Simple, right?

But as a reader of Yellowstone Caldera Chronicles, you probably guessed that things are slightly more complex. Almost nothing at Yellowstone, or any other volcano, is simple. Volcanoes are complicated by nature, and that makes it hard to figure out what’s going on inside, hidden from direct view by kilometers of solid rock.

Fortunately, there are clues to be found, and scientists use a variety of tools to track them down. A complete and definitive understanding of the cause(s) of ground deformation at any given place and time is elusive, but the list of suspects is small and usually the most likely culprit(s) can be identified.

Let’s start with the easy part of the question: What do we mean by the word deformation? The term refers to a change in size, shape or volume over time. When you stretch a rubber band, squeeze a tennis ball, inflate a balloon, or push on a tablecloth, you’re causing deformation. Your action produces a change in size, shape, and/or volume of the object you’re deforming.

If the object is a volcano, the same principal applies. Something underground (a deformation source) causes the volcano to change in size, shape or volume over time. In most cases, we observe the change at or near the surface; hence, the terms “surface deformation” and “ground deformation.” Except in extreme cases (for example, the bulge at Mount St. Helens in 1980), the change is too small to be noticed with the human eye — but not too small to be measured with geodetic monitoring techniques, including leveling, GNSS (GPS), and Interferometric Synthetic Aperture Radar (InSAR). And over tens of thousands of years, we can use evidence of changes in the level of Yellowstone Lake to determine the deformation history of the region.

Now for the hard part: Why do volcanoes deform? The obvious answer is a good one. Magma is the lifeblood of volcanoes, and it plays an important role in most cases of volcano deformation. “Magma in, volcano up; magma out, volcano down” is both intuitive and valid. When magma moves inside a volcano, its movement has to be accommodated by deformation of surrounding rock, much like the motion of one fluid in a lava lamp must be accompanied by adjustments in the second fluid.

As you might suspect, there’s more to the story. In addition to its volume, magma comprises two more potential deformation agents: gas and heat. Under high pressure at great depth, most gases can be dissolved in magma, like the carbonation dissolved in an unopened can of soda. In the dissolved state, they occupy relatively little space. But as magma rises and encounters lower pressures, some of the gases are no longer soluble. They “exsolve” to form bubbles. Gas exsolution increases pressure in the magma, which can deform surrounding rock and the overlying ground surface, causing it to bulge upward. Conversely, gas escaping from magma lowers magma pressure, allowing the overlying surface to subside.

Heat can act as a deformation agent, too. Most materials expand when heated. The effect is relatively small on most solids, including rocks, but much greater on fluids, including water vapor and steam. (Water vapor is H2O in gaseous, molecular form; steam is water vapor condensed into droplet form. Heating water vapor or steam in a confined space causes a large increase in pressure.)

Many volcanoes host hydrothermal systems (Yellowstone is a world-class example) that are powered by magmatic heat. Steam or water vapor trapped within a hydrothermal system and heated will pressurize its “container” and deform its surroundings, causing expansion and surface uplift. If the container ruptures — an occurrence usually accompanied by a swarm of earthquakes indicating rock fracturing — pressure decreases and the surface subsides.

In fact, this is exactly what happened at Norris Geyser Basin in 2013–2014. The ground began to uplift in late 2013, and by late March 2014 had risen by almost 6 centimeters (about 2 inches). On March 30, 2014, a M4.8 earthquake occurred — the largest earthquake in Yellowstone since 1975 — and the ground immediately began to subside. Pressurization of the hydrothermal system caused the uplift, and the earthquake was the container “breaking,” after which subsidence occurred as the pressure was released. The 2013–2014 deformation episode at Norris Geyser Basin was part of a larger sequence of uplift and subsidence that also involved a deep magmatic intrusion in the late 1990s.

There’s one more deformation agent that sometimes acts at volcanoes: tectonic forces resulting from the dynamic nature of Earth’s crust. Volcanoes deform when they are squeezed, stretched or sheared by tectonic forces, not unlike a tablecloth that wrinkles when you push it across a table. Yellowstone exists in a zone of east-west crustal extension, as evidenced by north-south trending mountain ranges such as the Teton and Gallatin ranges, which are associated with numerous tectonic faults. At its current rate, tectonic deformation is thought to contribute relatively little to the deformation observed at Yellowstone (although the faults are the sources of numerous small earthquakes), except possibly near Hebgen Lake, just west of the park boundary, where there might still be deformation occurring after the 1959 M7.3 earthquake.

The causes of deformation in Yellowstone are many and complex, but monitoring changes to the Yellowstone system can provide clues to the source. And despite the temptation to say, “it’s magma,” — it is a volcano, after all — water and fault motion can be just as important to the ups and downs of Yellowstone.

The Rocky Mountain Elk Foundation had attempted to bridge the buyer and seller, since acquisition of the land would have provided public access to an additional 9,300 acres of BLM and state land now inaccessible.

A Connecticut woman faces a week in jail and $2,400 in fines after being prosecuted for walking across a thermal area in Yellowstone National Park.

Possession of grizzly bear parts, since it is protected under the Endangered Species Act, is a violation of the federal law. 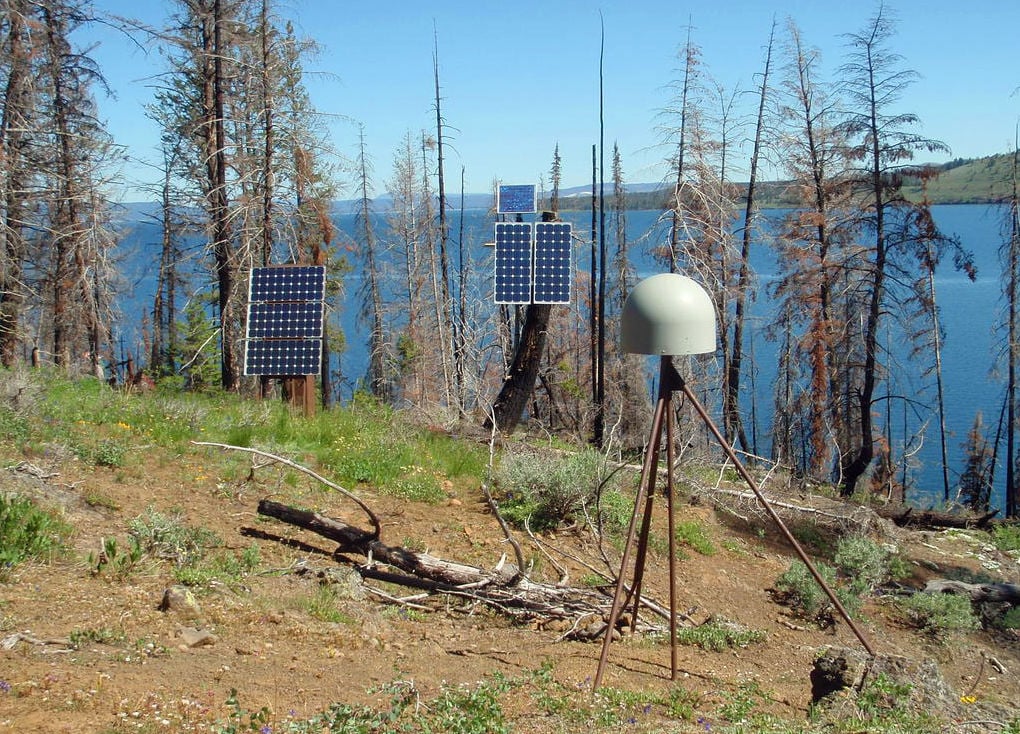 This GPS monitoring station is located on The Promontory between the South Arm and Southeast Arm of Yellowstone Lake. It was installed in 2005 as part of the Yellowstone component of the National Science Foundation's Plate Boundary Observatory. 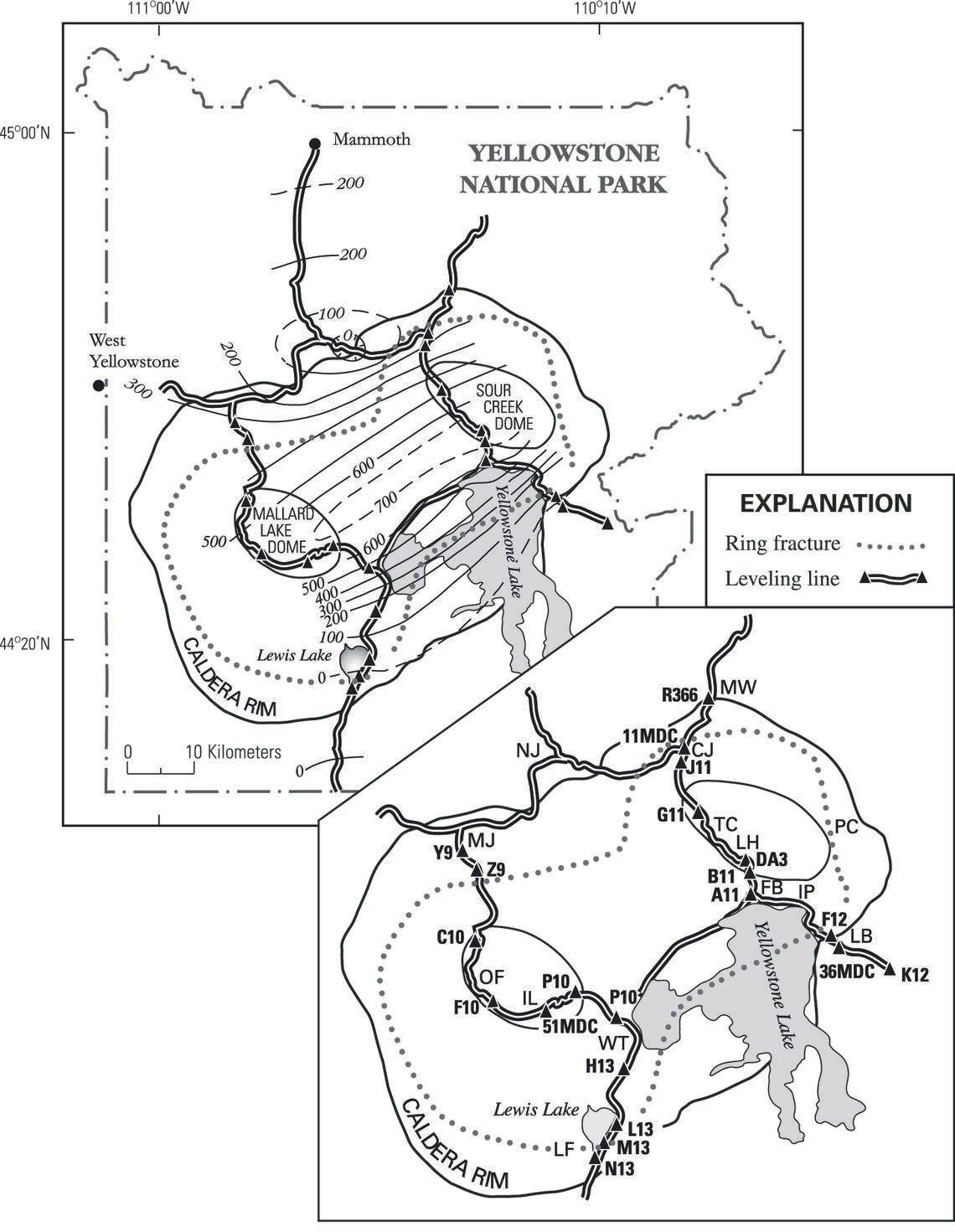 The contours of surface uplift that occurred in the Yellowstone caldera between leveling surveys in 1923 and 1975-77 are show at upper left. At lower right are locations of key benchmarks. The central part of the caldera floor rose more than 700 millimeters (28 inches), at an average rate of 14 millimeters per year (0.5 inch per year). The greatest uplift occurred between the Mallard Lake and Sour Creek resurgent domes, including near Old Faithful and LeHardys Rapids.