There’s no proposal to revive a controversial land exchange between two billionaire Montana landowners and the Bureau of Land Management, despite a recent news story that said Farris Wilks had met with Secretary of Interior Ryan Zinke in September.

“There is obviously a lot of checkerboard land in Montana and across the West,” said Heather Swift, Zinke’s press secretary, in an email. “The Secretary is interested in getting access to our public land, especially prime hunting and recreation areas, and is looking at everything from easements to swaps.”

Darryl James, a Montana-based consultant for brothers Farris and Dan Wilks, said the Washington, D.C., meeting — which he also attended — was simply to see if there was “any appetite” on Zinke’s part to look at the land exchange again. James said Zinke made no commitment but suggested the Wilkses meet with the BLM’s staff in Billings.

“They were here this fall,” said Al Nash, Montana-Dakotas office spokesman for the BLM. “Broadly they said they were interested in talking to us again. But there’s been no new proposal and no follow-up since then.”

James said the BLM staff indicated it would be “late this year” before staff would be freed up even to consider another land exchange proposal.

“We have always been interested,” James said, and the BLM has never said it’s a “bad deal” or that the agency wouldn’t consider it. He also said the Wilkses continue to deal with trespass issues that a land exchange could help resolve.

With the change in political administrations in Washington, James said it was an appropriate time to find out if the previous administration had shot the Wilkses’ proposal down for purely political reasons, or if it truly was a question of manpower and staffing time.

“We’re certainly not trying to hide anything,” James said. “We want to do it transparently.”

News of the meeting was first reported by The Guardian, which published a story last week.

Brothers Dan and Farris Wilks are two of the largest landowners in Montana, owning more than 346,000 acres across the state.

The Wilks brothers acquired their fortune from selling their interest in Frac Tech in 2011, a deal that was reportedly worth $3.2 billion. Frac Tech was an oil fracking business, the same technology that’s being used to fuel North Dakota’s Bakken oil shale boom.

The Wilkses' first Montana purchase, in 2011, was the historic NBar Ranch, southeast of Lewistown. Within that ranch is a block of 2,700 acres of BLM land known as the Durfee Hills that has been a bone of contention between local hunters and the Wilkses.

Because the Wilkses allow only limited public hunting and own so much acreage along Flatwillow Creek and the Little Snowy Mountains, the landowners have grown one of the largest herds of elk in the state, estimated at around 2,600 animals in Hunting District 411, north of the Little Snowies, and 4,800 in HD 530 south of the mountains.

By flying into the Durfee Hills — there’s no public road easement to the acreage — hunters have had limited access to a portion of that huge herd of elk. So many hunters have been against giving up the BLM property in any exchange proposed by the Wilkses, even if access is only via an airplane or helicopter ride that makes the area fairly exclusive as to who can hunt.

“I’ve hunted all over the West, and there’s no place that has any better elk hunting than Hunting District 411 in Montana,” Randy Newberg, a Bozeman resident and host of the television hunting show “On Your Own Adventures,” told the Gazette in 2014.

It’s almost an understatement to say the land exchange has had a complicated history.

In March 2014, the Wilkses proposed exchanging a portion of the 22,800-acre Anchor Ranch they bought in north-central Montana’s Blaine County — abutting the Upper Missouri River Breaks National Monument — for the Durfee Hills. A BLM staffer may have indicated the Anchor Ranch would be prime land for just such a deal, records show.

The original proposal by the Wilkses involved 12 BLM parcels inside their property. Nine of the BLM parcels, except for the Durfee Hills, cannot be accessed by the public. In exchange, the Wilkses were proposing to trade five parcels in Blaine County that would provide access along Bullwhacker Road to about 50,000 acres of federal land. In addition, the Wilkses would exchange about 1,250 acres along Red Hill Road that would provide access to an estimated 10,000 acres at the southeast end of the Big Snowy Mountains.

“The hunters are not opposed to the idea of a land exchange,” said Ron Moody, a now-deceased former Montana Fish and Wildlife Commission member from Lewistown, in 2015. “But they’ve believed from the beginning that the Durfee Hills are a land of extraordinary value, and so far the Wilkses have not offered anything of similar value.”

In April 2014, only a month after the Wilkses proposed the exchange, the BLM decided to take the Durfee Hills off the table citing widespread public comment from around the country — not just the region — against the exchange. The agency also said it was looking into building its own route into the Missouri Breaks around the Wilkses’ Anchor Ranch. The Wilkses’ consultant, Darryl James, was miffed about the decision by the BLM, saying at the time that the public process had been “hijacked.”

In an end run around the BLM, in August 2014 the Wilkses had a website built — MontanaPublicAccess.com — to present their case directly to the public. The BLM responded by saying the agency’s decision to back away from a land swap was based on the complexity of the exchange, a lack of staffing and the length of time the process would take.

By January 2015, the BLM said the exchange would once again be considered along with other alternatives, but backed away from building its own road into the Missouri Breaks after saying it would be too expensive to build another route.

By April 2015 the BLM said it was conducting an investigation into the Wilkses for building a fence around the Durfee Hills that encroached on the federal property. The fencing contractors had also felled timber on federal land. Initially, the BLM had denied any encroachment until pressed by a conservation advocate.

In August 2015 the Wilkses sweetened their proposal, offering to open up 16,000 acres of their land to limited public elk hunting. The brothers also offered public access through their Anchor Ranch, via the Bullwhacker Road, that hunting season.

By July 2016, the Wilkses’ fencing contractor had moved its encroaching fence on the Durfee Hills and recontoured some of the land torn up by a bulldozer, and the Wilkses had agreed to pay BLM $71,000 for costs the agency incurred as well as for the federal timber that was felled. In September 2016 the BLM was criticized for allowing some of the restoration work to occur during the height of archery season, frustrating elk hunters on the small patch of federal ground.

In August 2017 staff from the Lewistown Field Office signed off on final inspection of the restoration work, Nash said. Adding the agency would monitor the rehabilitation, vegetation cover and soil stabilization for five years. 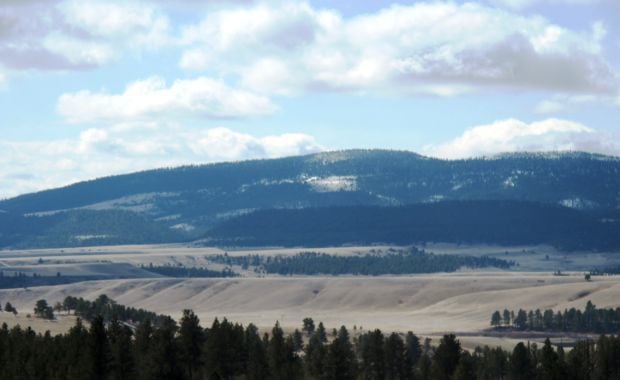 The Durfee Hills, located in Fergus County, is 2,700 acres of BLM land surrounded by the NBar Ranch, owned by Dan and Farris Wilks. 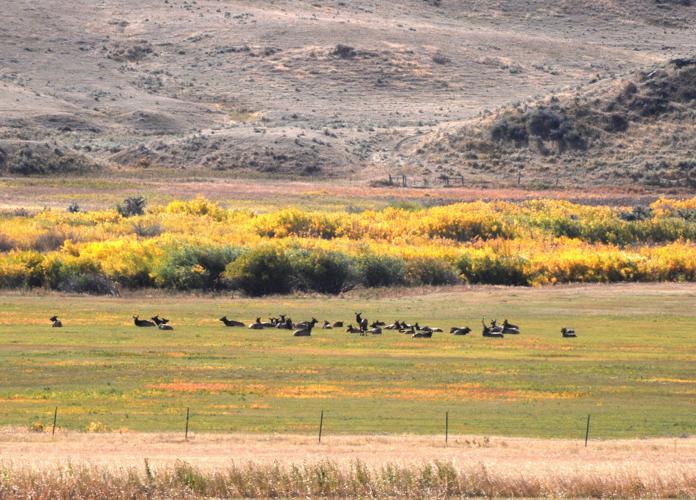 The NBar Ranch, owned by the Wilks brothers, is headquartered along Flatwillow Creek in Fergus County. 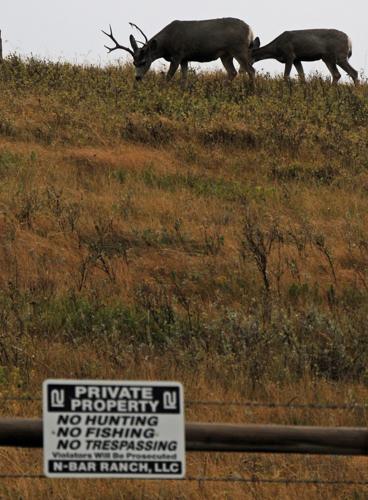 Deer graze on the NBar Ranch, which surrounds the Durfee Hills — a controversial patch of federal land valued by hunters.