It sounds like a bad horror movie. Canadian wild pigs are amassing at Montana’s northern border. It’s only a matter of time before they wander south and begin their destructive assault on everything from wildlife to agricultural fields and even archaeological sites.

Photos taken as recently as last year showed feral hogs only five miles north of the U.S. border, she said.

“So they are getting very, very close and we are very concerned,” Hester said.

The threat seems even more imminent since the publication of a University of Saskatchewan study showing the species’ growth across Canada during the past 27 years at a rate of about 9% a year.

One estimate put the cost of feral pigs at $1.5 billion a year in the United States.

Wild pigs may seem an unusual species to thrive in Canada’s cold climate, but the feral swine — descendants of European wild boars brought to the nation for game farms and as food — are extremely adaptable.

“People say the cold winters will keep them away, but we know that’s not the case,” said Greg Link of the North Dakota Game and Fish Department.

Wild swine are found in Eurasia, Australia, Africa and South America. In the United States feral hogs have expanded from 17 to 38 states during the past 30 years. The only place they aren’t found is Antarctica.

North Dakota gets the occasional report of a wild pig, Link said, but it’s more often an escaped domestic pig or one released by someone into the state than a Canadian migrant.

In January 2018 after a reported sighting north of Saco, a Wildlife Services crew flew for 13½ hours looking for wild pigs but found nothing, despite excellent conditions with fresh snow.

“But we’ve not had any confirmation of feral pigs coming in from Saskatchewan.”

The state has taken a firm stance against wild hogs, which are considered a game species in some southern states. In Montana’s hunting regulations it specifically states, “To prevent the introduction of feral swine into Montana, the 2015 Legislature prohibited the transportation, possession, and hunting of feral swine.”

“It’s an eradication for feral swine, we don’t want them here as you can probably guess,” said John Vore of Montana Fish, Wildlife & Parks.

Senate Bill 100 set a minimum fine of $2,000 for anyone who is caught transporting, importing or possessing feral swine, as well as anyone feeding or trapping, hunting or profiting from the release of wild hogs. Landowners can kill the pigs on their property if they pose an "immediate threat of harm to a person or property."

According to the University of Saskatchewan study, wild pigs have increased their territory in Canada by 5,400 square miles a year, on average, during the past decade. Just in the Canadian prairie provinces wild pigs range over 46,000 square miles.

The animals can spread so quickly because they are sexually mature at a young age and can have large litters of six piglets or more. They weigh on average 120 to 250 pounds, but larger ones have tipped the scales at more than 400 pounds.

“They are very tough,” Steuber said. “Not much messes with a 300-pound sow with big tusks sticking out.”

In addition to the physical damage they can cause to habitat by rooting and feeding, feral swine are also known to carry 89 bacterial, viral, and parasitic diseases that can be transferred to livestock, wildlife, and humans — everything from swine brucellosis to swine fever and salmonellosis.

Hunting has proven to do little to halt the species' spread. Once threatened by hunters, the wild pigs may become nocturnal. They are also incredibly good at hiding, even burrowing under the snow to create “pigloos.”

Although hunters may imagine them as bacon on hooves, wild pigs are leaner than farm-raised ones, since they are more active. That means the belly meat traditionally used for bacon may not be as marbled with fat.

Bait and trail cameras are the best tools for hunters, according to Ryan Brook, an associate professor at the University of Saskatchewan. He posted tips on the Saskatchewan Wild Boar Hunting Facebook page.

“I get loads of hunters yelling at me that there aren't any wild pigs out there in Saskatchewan, mostly because they approach it like deer, elk, or moose hunting and don't put in the effort,” Brook wrote. “These pigs are probably the hardest animals to hunt in Saskatchewan and just driving grid roads will rarely get you much success — even if you do spot one or two they are so fast and so smart that they'll be in the heavy willows before you open your truck door.”

He also noted that, “nowhere on Earth has hunting ever successfully controlled wild pig populations.”

Montana is in the process of developing a response plan, Hester said. It will be modeled on a successful Washington state program called “squeal on pigs,” encouraging people to report wild pig sightings.

Among western states the animals are cited as one of the top 25 threats to the environment.

No matter the measures taken, “it’s kind of inevitable” that wild pigs will one day make their way into Montana, Hester said. “There’s no fences or wall to keep them out.

When it comes to the outdoors, what's important to Montanans? Survey aimed at finding out

Saying she is passionate about the state, self-described eastern Montana girl Christine Whitlatch has lent her voice to a growing chorus of pe…

5 things 'Far Cry 5' gets right about Montana, and 5 things it gets wrong

How well did Ubisoft capture Big Sky Country in its first "Far Cry" game set in America? Here are just a few things they got right and wrong about Montana.

Anglers continue to do well at Fort Peck Reservoir in the Crooked Creek area. Those fishing in the Fourchette Bay part of the reservoir also e…

Genghis Khan exhibit featured at Bozeman's Museum of the Rockies

Abandoned by his clan after his chieftain father was poisoned, Genghis Khan would recover from his youthful impediments to become one of the g…

Oil and gas development throughout Wyoming’s sagebrush habitats may be affecting mule deer well beyond the perimeters of a well pad, a new study by University of Wyoming researchers found.

Feral Canadian hogs encroaching on Montana border are a concern for farmers, others, officials say

KALISPELL — Wildlife officials say feral hogs from Canada encroaching on Montana's northern border are a serious concern for farmers and others.

Video: Be on the lookout for wild pigs

Sport hunting hogs makes it harder to stamp them out, officials say as feral pigs creep toward Montana

Stealthy feral pigs can even burrow into snow, creating "pigloos" — actually the technical term — to help ride out harsh winters.

Farming and hunting are two of the defining qualities of Montana. For decades, hunters and landowners have worked together to maintain our pub…

Tourists flocked to Montana in '19 but spent less; expert warns of feral pig threat to industry

Compared to 2018, the number of travelers visiting Montana appears to have increased 2%. But despite the higher numbers of tourists, there looks to have been a 2% total decrease in spending. 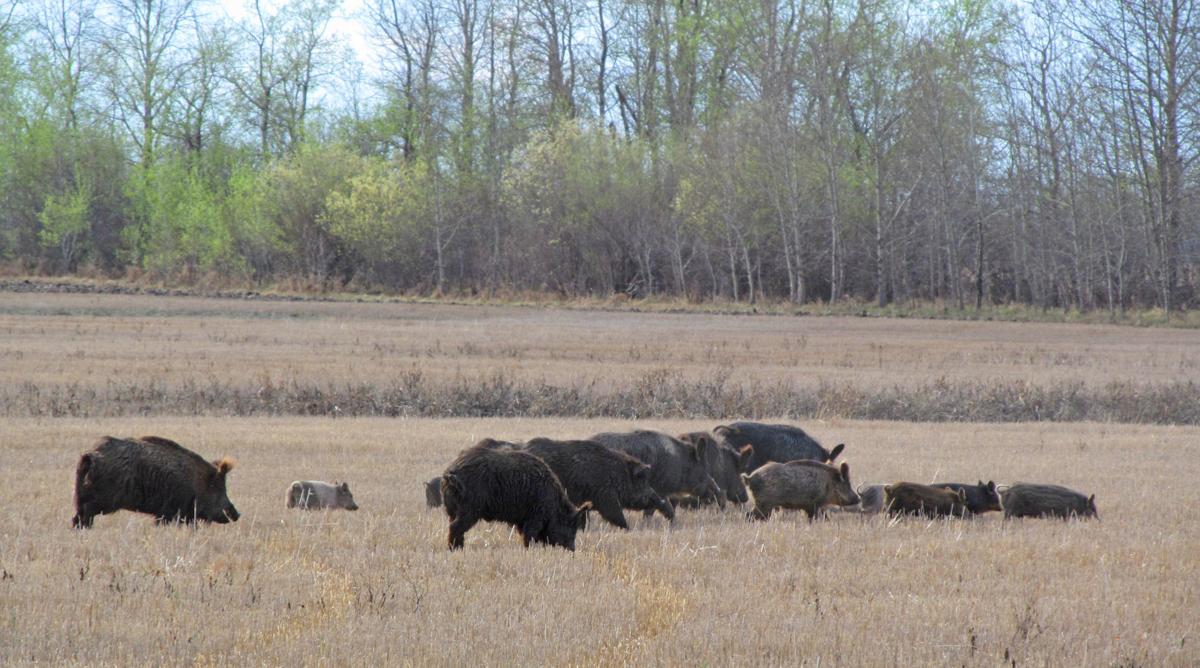 A sounder of wild pigs roams in Saskatchewan, Canada. The photo shows mature females and their litters of various ages feeding on harvested crop residue. The hybrid wild pigs — a mix of wild boar and domestic pigs — have lighter colored fur than true Eurasian wild boar. 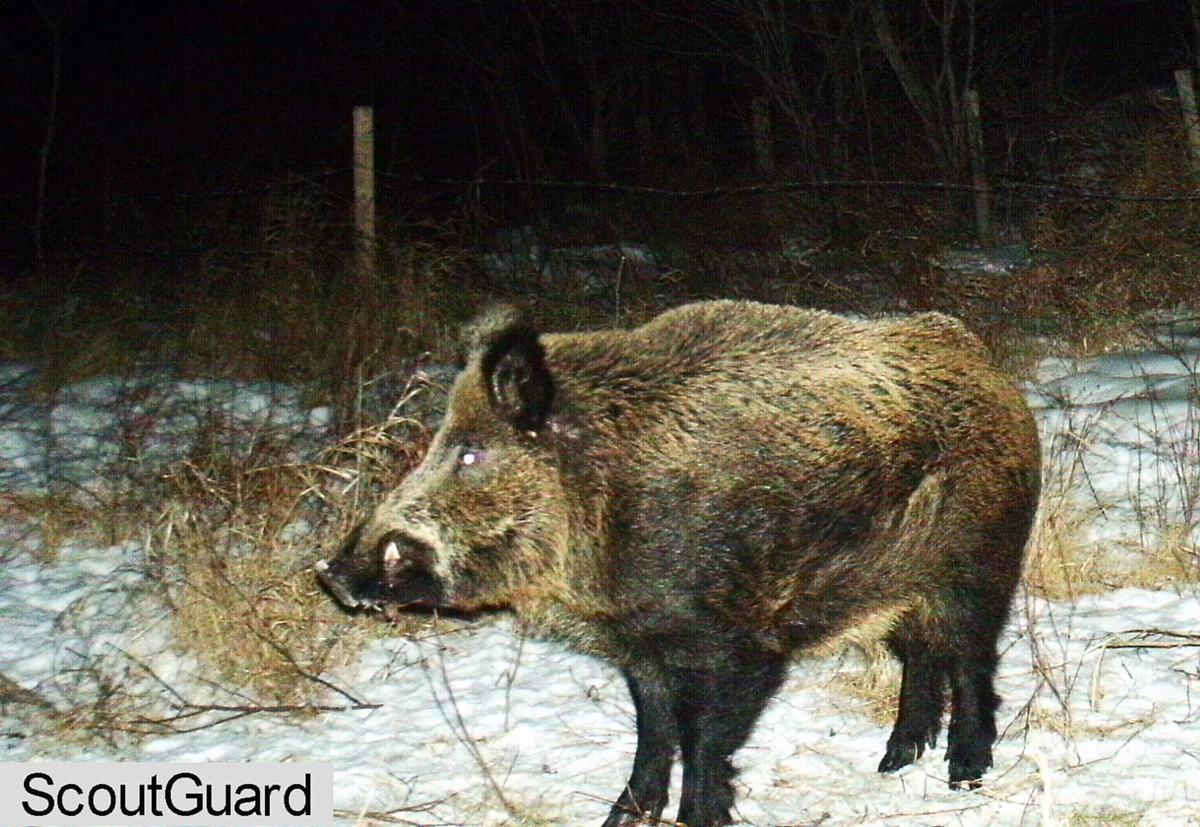 A mature adult wild pig is photographed at night in Saskatchewan, Canada. Both males and females have large tusks. The territory of a male wild pig can be as large as 300 square kilometers in the summer, with sows covering up to 230 kilometers.

This graphic shows the estimated growth of wild pig populations in Canada between 1990 and 2017.