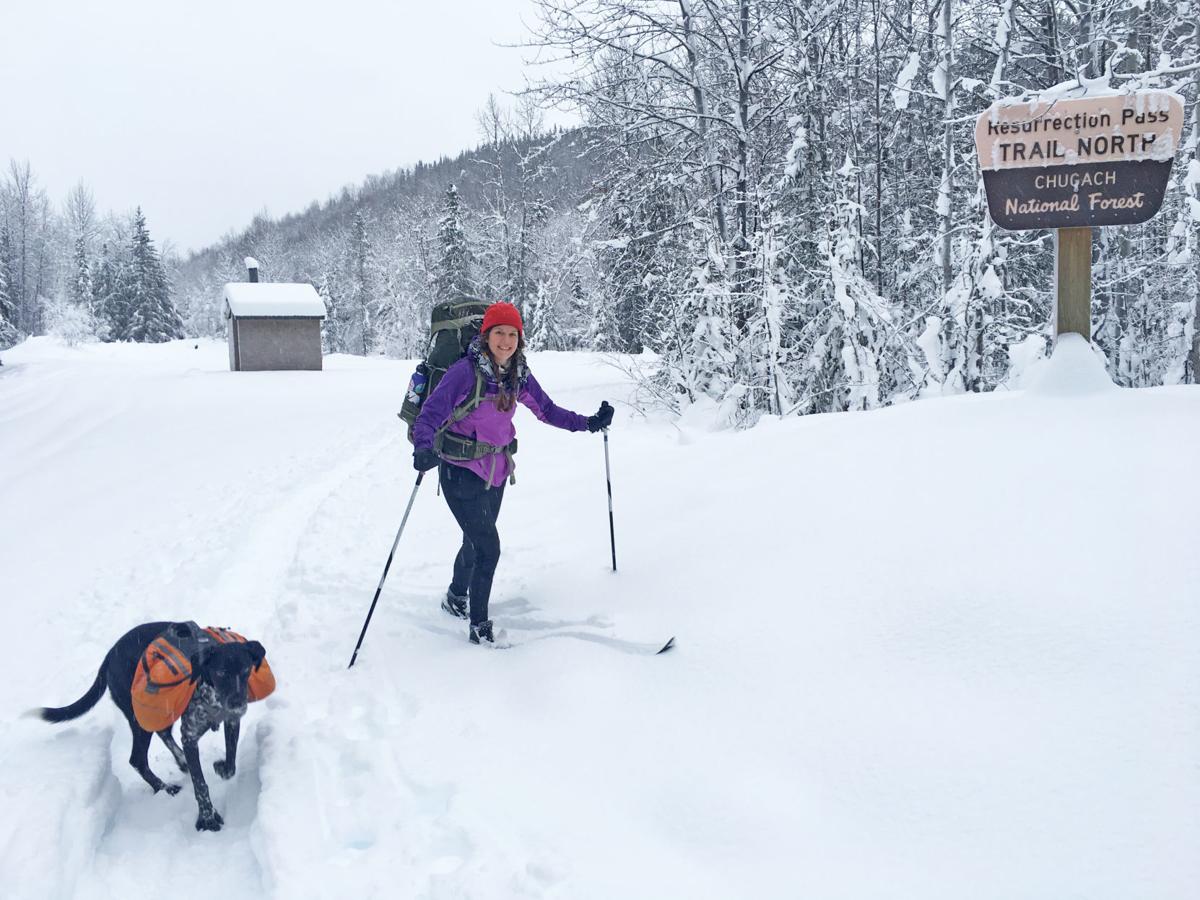 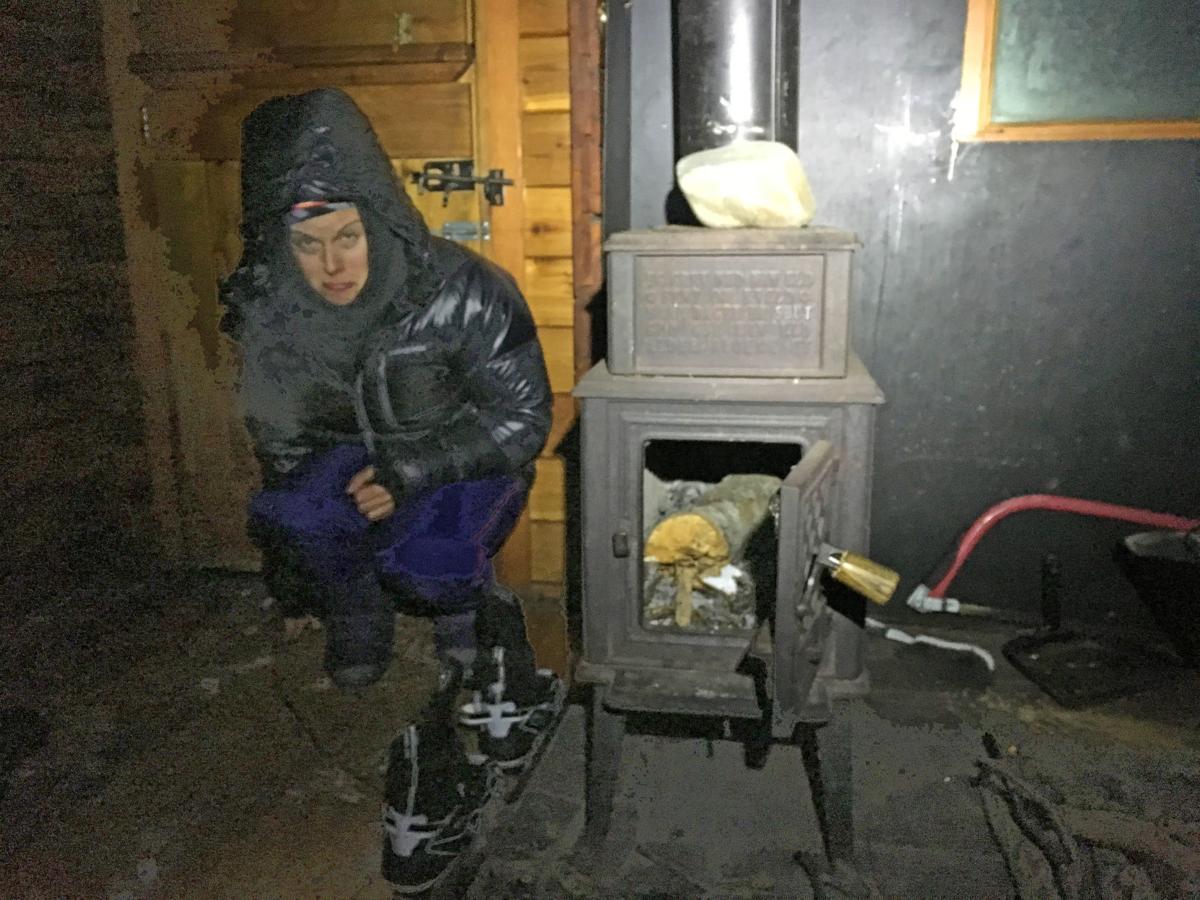 Lauren Frisch finishes a cold night of camping in Alaska's Caribou Creek Cabin after she and her friend were unable to get the wood stove lit.

Lauren Frisch finishes a cold night of camping in Alaska's Caribou Creek Cabin after she and her friend were unable to get the wood stove lit.

Even the weekday copy of the Anchorage Daily News didn’t burn well. It smoldered at the edges and only ignited when I blew directly on it. The kindling, likewise, only singed. With time, some of the smaller pieces burned down into coals, but except with a steady stream of oxygen on them, they didn’t produce consistent flames.

We still had a bit of newspaper and some toilet paper to use as tinder, but I started to get the feeling we might be in for a cold night when I noticed that despite my best efforts, everything went dark soon after I stopped blowing on it.

A few hours earlier, at about 7 p.m., my girlfriend, Lauren Frisch, and I arrived at the Caribou Creek Cabin on the Resurrection Pass Trail near the town of Hope on Alaska's Kenai Peninsula. We’d planned what we thought was a pretty conservative itinerary to ski the 38-mile trail over four days and three nights. We’d planned to stay at one of the Forest Service’s public use cabins each night.

Hope was mostly deserted this time of year and the trail especially so. No one had been on most of the trail since the last dump of snow, maybe all winter. It took us all afternoon and evening to break through 4-6 inches of new snow over eight miles of trail. Daisy Tada! the retired sled dog followed behind our ski tracks instead of bounding ahead as she does on a packed trail.

We skied by headlamp for the last few hours. Although there weren’t any tracks, it was easy to follow the trail, a wide cut through the spruce trees that followed the Resurrection Creek Valley. The numerous streams were a mixture of thin ice and running water, and we were glad the trail had bridges over them all.

As it always is, it was a relief to see the outline of a cabin poking out of the woods in the darkness, knowing we’d soon be able to dry our wet clothes.

But two hours later, a thin frost still covered surfaces in the cabin. We had changed into dry clothes, but the wet layers we’d taken off were starting to solidify. We’d also piled on all of our warmest layers.

The previous cabin occupants hadn’t left us a good supply of dry firewood, but there was a little bit of wood. A couple of big, decently dry-looking logs sat against the small wood stove, along with a bunch of green willow branches. Searching underneath the cabin and in the empty woodpile, we found better kindling — some scraps of dry wood that had broken off of bigger pieces.

There was a dull saw next to the wood stove, but no functional ax about. We found one ax head frozen solid to the bench on the porch.

Lauren and I each took a turn kneeling in front of the small wood stove, slowly adding more newspaper under a pile of kindling without any success building it into a bigger blaze. When we finished burning all the newspaper, we even tried burning some of the blank pages of the cabin logbook.

Instead of drafting up out the chimney, the smoke drifted out the door and into the cabin.

It was thankfully a warm night by Alaska winter standards — even south-central standards. The temperature was about 30 above, warm enough to use an isobutane cook stove to make a hot burrito dinner and melt snow for drinking water.

Lauren and I had both winter camped without fire on colder nights, but it felt different to find ourselves unexpectedly winter camping on what was supposed to be a warm cabin trip. We’d brought warm sleeping bags because we’d been warned that these national forest cabins weren’t as well-insulated as public use cabins in the Interior. We slept well in our feather cocoons, but in the middle of the night I noticed Daisy Tada! was shivering under her thin jacket. I opened my sleeping bag up and she crawled about half of her body inside.

In the morning we lay in our sleeping bags, dreading getting out as we figure out our plan. We were leaning toward pushing on down the trail, but the experience of forcing our feet into ice-covered boots made us change our minds about staying with the planned itinerary. Instead of breaking trail farther up the valley, we turned around, following our ski tracks back to Hope. We drove around the mountains to Cooper Landing and spent the next night at a warm room at the Sunrise Inn.

The next day we met our friend Tom Hewitt and his dog Bella from Anchorage and skied from Bean Creek trailhead to the southern part of Resurrection Pass. This side of the trail was considerably different than the north side.

We saw several other people along the trail, which was well packed. Skiing eight miles to the Romig Cabin on the banks of Juneau Lake took a fraction of the time it had taken to break trail to the Caribou Creek trailhead on the other side of the pass.

The Romig Cabin had a similar layout as Caribou Creek but felt different when we went inside because people had stayed there the previous night and there was some residual heat when we arrived. We found the same type of stove at Romig as at Caribou Creek, but this cabin had better dry wood.

I like to think we would have had no problem getting a good fire going with a bit of paper and wood, but we didn’t even try. Lauren threw in a piece of chemical fire starter Tom had brought from Anchorage, lit it on fire and had a roaring blaze in no time.

In the morning we cut up a big section of a downed spruce tree near the cabin for future occupants to use.

Lauren and I don’t think of ourselves as bad fire builders. We’ve built dozens of campfires and wood stove fires at far lower temperatures. Usually there is no issue. We open the dampers, light some tinder, build up kindling and gradually add bigger fuel until we have a warm cabin and can start to close the dampers and move on to important tasks like drinking wine and playing cards.

A fire needs a supply of oxygen to burn. The fact that the paper and kindling were smoldering and smoke was flowing out the door of the stove instead of out the chimney is a sign of an airflow issue, Severns said.

At the cabin, we suspected we had an airflow issue and tried to deal with it by making sure all the dampers were open and by blowing on our struggling fire to give it supplemental oxygen. It was an unfamiliar stove, but as best we could tell we had the stove’s only damper open all the way. The stove had no visible damper mechanism on the stove pipe or the door. It had a rod below the door that regulated airflow through the bottom of the stove.

One airflow problem I didn’t think to check was the chimney, which can become plugged with snow or creosote, Severns said.

The last people who signed the cabin logbook, about a month earlier in early December, mentioned that they struggled to get a fire going. Maybe there is a chimney issue, or maybe it’s something else. When the government shutdown ends, I plan to ask a national forest ranger if there have been any issues with that stove.

The biggest lesson I got out of this experience is that it’s worthwhile to carry a small chemical fire starter. I’d been meaning to make some fire starters with egg cartons, sawdust and paraffin wax. If I haven’t done it by my next cabin trip I should just buy something.

In general, “heat creates draft,” Severns said. If we’d been able to build a hot enough fire in the stove — and if the chimney wasn’t plugged — we should have been able to warm the stove enough to get airflow going.

While we worked on the fire, we gathered birch bark and dead branches and moss below spruce trees, which Severns recommended as the best natural fire starter. It wasn’t enough for us. The steady burning of a chemical fire starter might have helped.

South-central Alaska often has higher humidity than the Interior. When Severns heard that even newspaper wasn’t burning well, he said higher moisture content may have been an issue for us.

Humidity makes it harder for fires to burn in general. There’s no trick for dealing with it, but if we had thought about the humidity, maybe we would have adjusted our expectations about how hard it would be to get the fire going. This might have kept us trying longer before giving up.

Wind wasn’t an issue on our trip, but pressure differentials around a cabin can make it hard to start a fire, Severns said.

In general, if the wind is blowing toward the door of a cabin, leaving the door open can help prevent building up of negative air pressure, which can make it harder to get a fire going, he said. If it’s blowing on the opposite side of the cabin from the door, that door on the leeward side should be left closed.

Winter camping is a special treat. Here are some tips

SEATTLE — My first winter camping experience was a bit of an anomaly. Yes, I slept on snow, but it was an unseasonably warm February weekend n…