Varley was lobbying a group of officials Wednesday to modify how the winter bison hunt is conducted in the Gardiner Basin, just north of Yellowstone National Park. The hunter-killed bison bones, fur and offal emphasized his argument: hunts are being conducted close to nearby residences.

“Our contention is that some of the hunting that does take place hasn’t been safe,” he said.

Residents variously referred to the area as the “killing field” or the “kill zone," noting that as soon as bison cross the park boundary they are fair game for hunters. The issue isn't new, as hunts have been conducted in the area since 2005.

Varley is a member of the Bear Creek Council, a conservation group based in Gardiner at the North Entrance to Yellowstone. He also grew up in Gardiner, the son of the park’s one-time chief scientist. After leaving and then returning to the region, Varley now runs a wildlife tourism business. He’s concerned not only about wildlife, but how the public perceives the state of Montana’s treatment of animals like bison.

“We are hyper-vigilant of things that may influence tourism,” he said. “Some (tourists) are appalled and dismayed by what they see.”

Once bison leave the park in the Gardiner Basin they can be legally killed during two winter seasons by state hunters, as well as by tribal hunters with treaty rights. Some tribal hunts extend into April. The problem has been that the areas where hunters have the easiest access to bison is relatively small and not far from residences.

“Three-hundred and fifty eight gut piles in one winter. Picture it,” said Bonnie Lynn, who lives across from Beattie Gulch, one of two prime bison hunting areas north of Gardiner.

The gut piles attract scavengers, everything from eagles and ravens to bobcats, coyotes, wolves and bears. Together they can pick clean the backbones, rib cages and gut piles in a matter of days. Some of the scavengers are killed by predator hunters, others have died from lead poisoning caused by consuming bullets.

“We are concerned about collateral damage,” Varley said.

Varley, other residents and partners of the Bear Creek Council were lobbying members of the Inter-Agency Bison Management Program, which includes state, federal and tribal officials. About 60 people toured the two hunting areas as residents spoke.

The requests were varied: Could the Forest Service land near the old Yellowstone Trail Road that leads to Beattie Gulch be closed to push the bison hunt farther away from residences? Could all bison carcasses be removed from the fields?

Last winter one resident estimated that out of the 300 animals killed more than 8,000 pounds of gut piles were left on the landscape.

“The Bear Creek Council is not against hunting,” Varley said, a message all of the other residents echoed. “But we are here to say the way hunting currently is conducted is not safe.”

Dan Stahler, who owns a home just off Eagle Creek Road, has lived close to the other main bison hunting area for five years. A hunter himself, Stahler said he has turned in many violators he’s seen trespassing, shooting from roads and hazing bison.

“I’ve been a witness to a lot of the negative activities,” he said.

He suggested the hunting area at Eagle Creek be pushed farther east, away from the houses, to increase safety for residents.

Ilona Popper, who lives farther up the road near the small community of Jardine, said during hunting season the icy road she commutes on becomes dangerous as hunters park in one lane of traffic to load or butcher their kill.

“It’s not being conducted as a safe hunt,” she said. “Something has to change.”

Officials from the IBMP were willing to listen to the many tales of residents, but didn’t want to offer hope for changes before consulting with the rest of the group. No one partner wants to take on any of the issues individually, always seeking a consensus as well as a cost-share for any expense incurred.

“I’m glad to see people talking about it and what the residents deal with,” said Mike Volesky, chief of operations for Montana Fish, Wildlife and Parks. “But there’s not an easy solution or we would have done it already.”

Last year FWP proposed closing Beattie Gulch to state hunters, a suggestion that never made it past muster because it wouldn’t affect tribal hunters, who are more numerous.

“Maybe by getting people together and hearing other people’s concerns, we could reconsider some things,” Volesky said. “But it’s tough when you have a number of tribes, a number of sovereigns who see things differently.”

Tribes with treaty rights to hunt in Montana are not governed by state game laws, although they often work in concert with FWP.

Carl Scheeler, wildlife program manager for the Umatilla Tribe, agreed that the tour provided a great opportunity for the IBMP to hear the concerns of the local community. He suggested a bounty paid for carcasses could monetize what is now considered waste, encouraging some locals or hunters to pick up the dead bison parts now left lying in the field.

The question then arises: where would the carcass parts be taken, and what would be done with them? They could be incinerated or maybe turned into compost, all issues that would have to be worked out between the IBMP partners.

“We need to keep all options open right now,” he said. “We clearly care about it.”

Yellowstone National Park's bison are hunted only once they leave the sanctuary, but they are also removed inside the park by officials.

Under an agreement with the members of the Inter-Agency Bison Management Program and the state of Montana, Yellowstone captures and ships to slaughter bison each winter to reduce the population, the idea being that once the herd is smaller maybe fewer will migrate out of the park and be killed.

The animals shipped to slaughter are butchered with the meat going to participating tribes.

Yellowstone is also working with the Fort Peck Tribes to increase the number of live bison removed from the park. The problem is the bison can't be moved until they are certified free of the disease brucellosis. That doesn't occur until the animals pass a lengthy quarantine period.

The tribes have built their own quarantine facility in hopes of speeding up the transfer, but the state of Montana has refused to allow them to be moved out of fear of spreading brucellosis to another region of the state.

A Montana ranching family’s decision to run a herd of goats and sheep in a region that supports the largest bighorn herd in the state, and was…

Four years after a Crow tribal game warden shot a bull elk out of season in Wyoming’s Bighorn National Forest, the issue of whether the state …

CHEYENNE, Wyo. — The first golden eagle in Yellowstone National Park fitted with a tracking device has died of lead poisoning, likely after co…

GARDINER — Bison managers are thrilled with the movement of five bison to the Fort Peck Indian Reservation, and they hope it’s a sign of thing…

SPOKANE, Wash. — On Wednesday the Washington Department of Fish and Wildlife authorized killing some members of a wolf pack that are preying o… 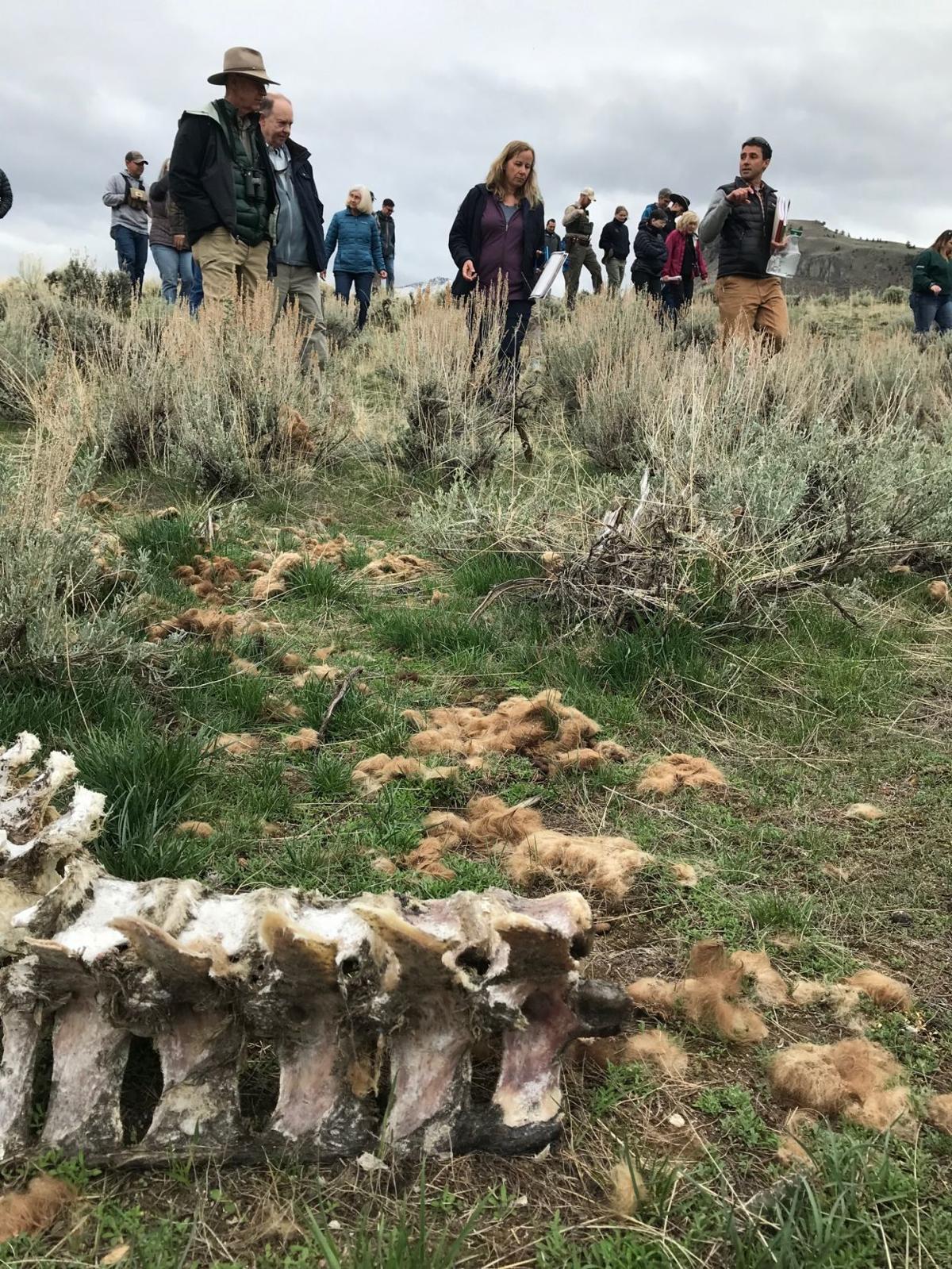 A backbone and scattered chunks of fur are all that remain of a bison killed by hunters near Beattie Gulch, one of two popular bison hunting areas north of Gardiner and Yellowstone National Park. 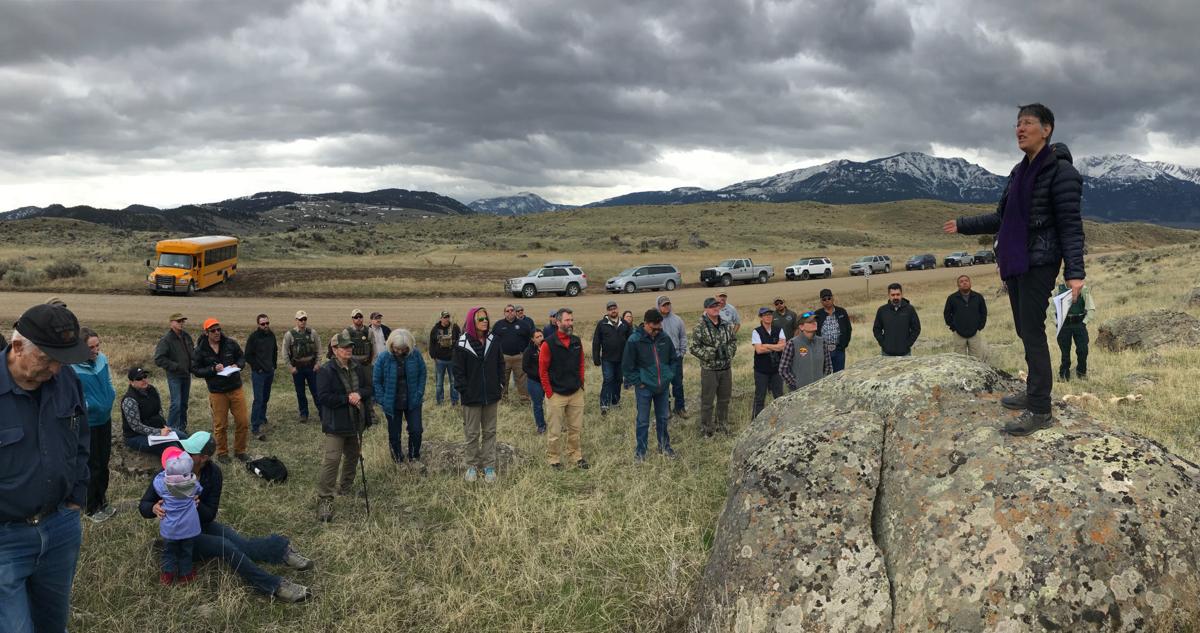 Ilona Popper speaks to a gathering of about 60 people along the road to Jardine, east of Gardiner. The area is a popular spot for bison and elk hunters just north of Yellowstone National Park. 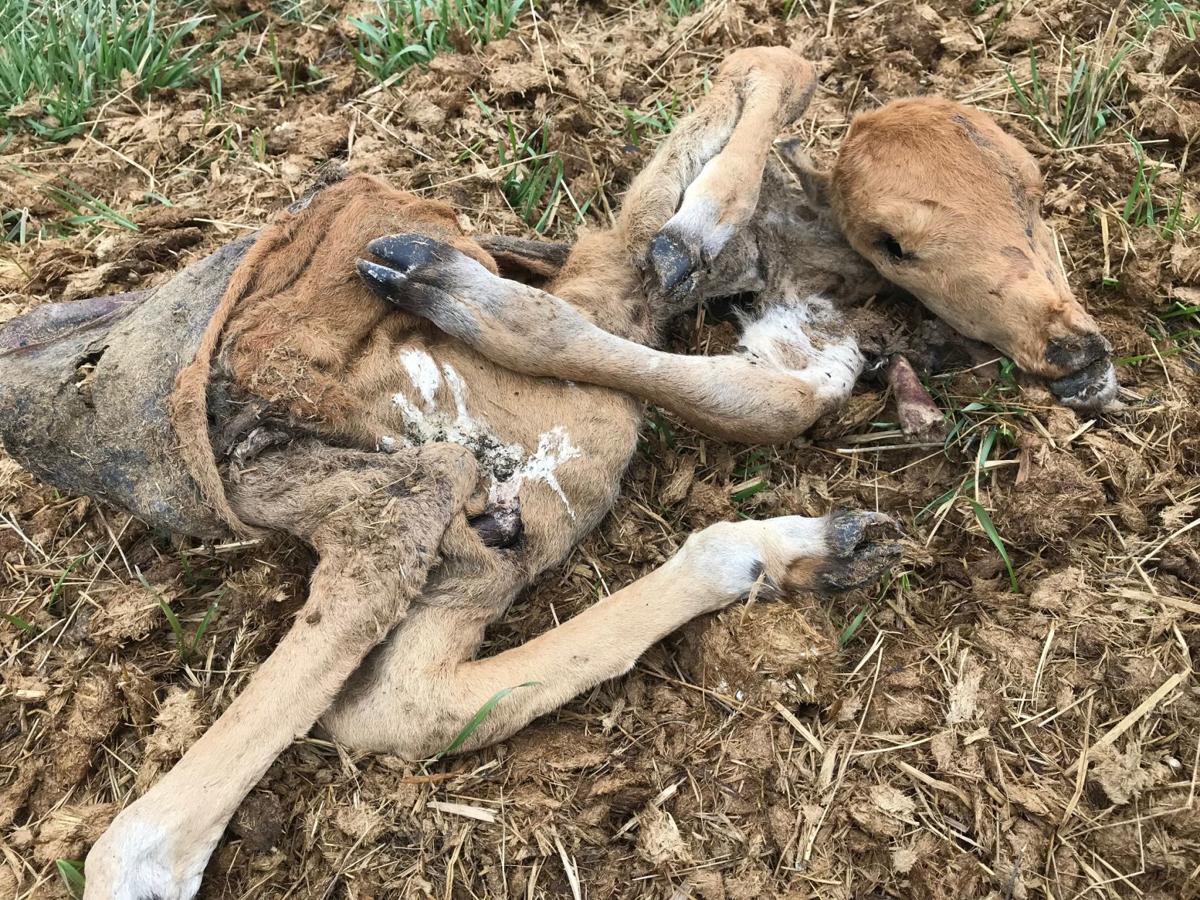 The remains of a bison fetus killed when its mother was harvested by hunters rests on a hillside not far from Beattie Gulch. 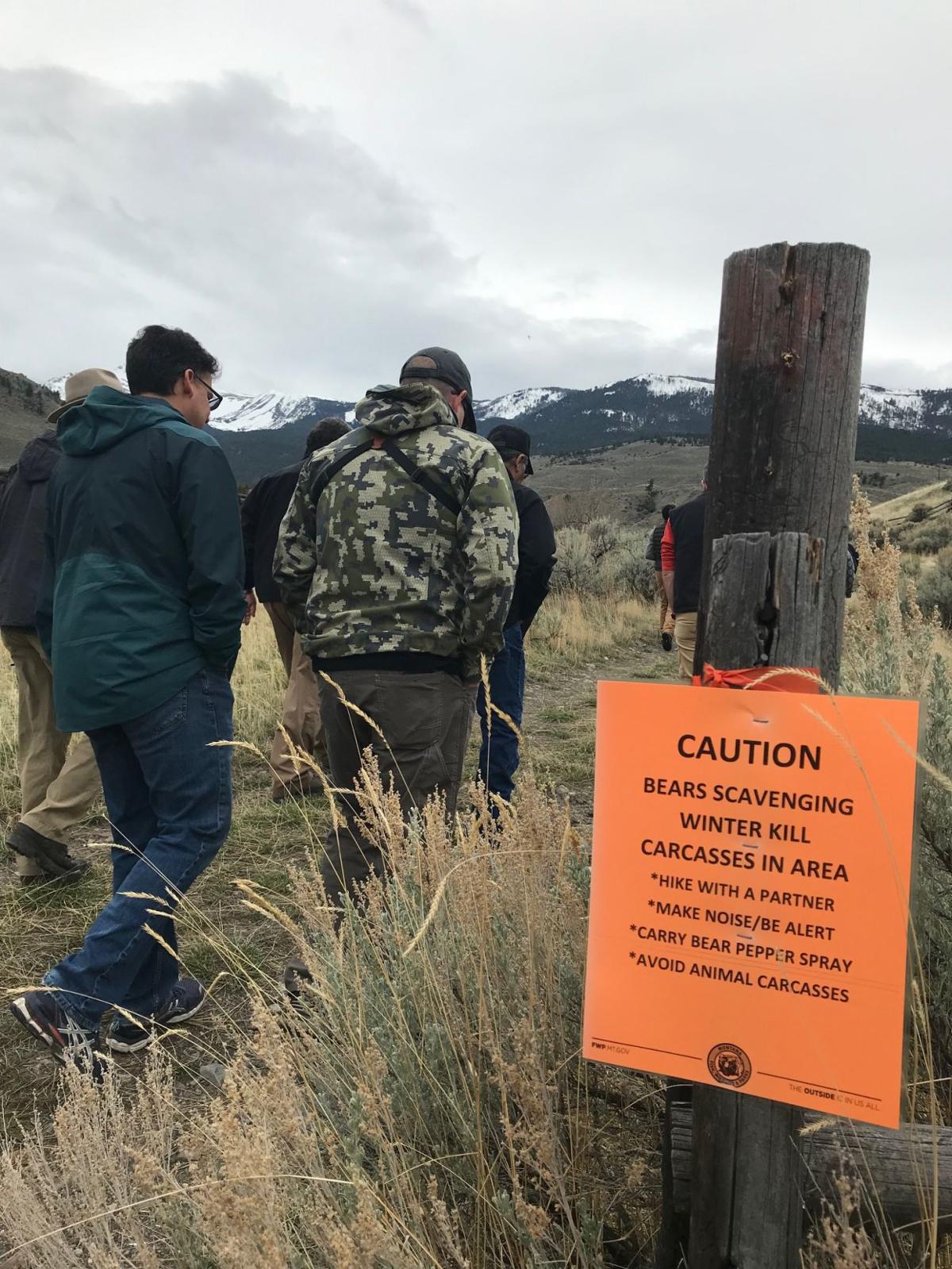 Members of the Inter-Agency Bison Management Program, Gardiner residents and tribal members hike into Beattie Gulch where a sign warns that winter-killed wildlife may attract bears. 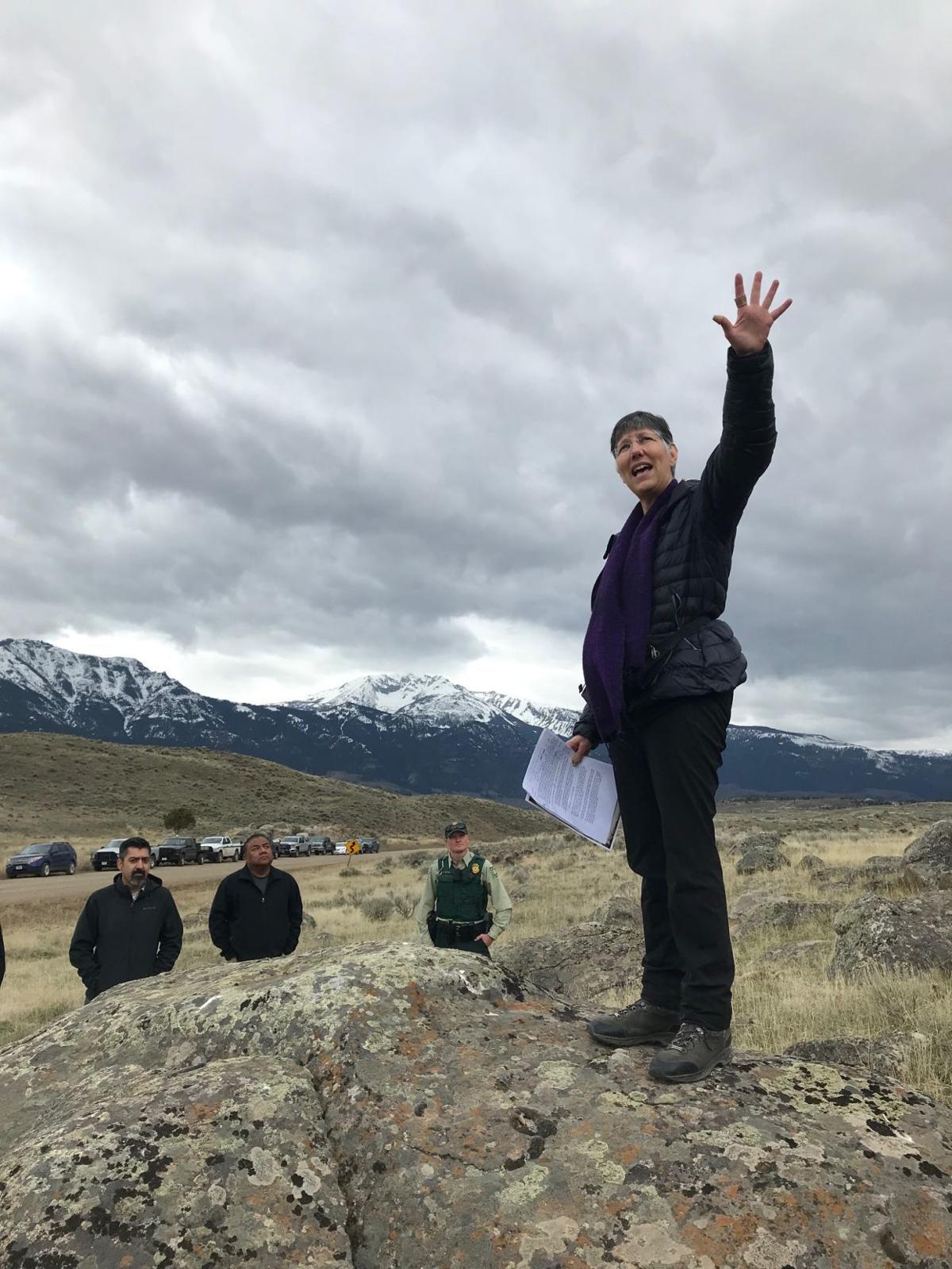 Ilona Popper, a resident of Jardine, talks about the issues she has with bison and elk hunters along the Eagle Creek Road outside of Gardiner on Wednesday.