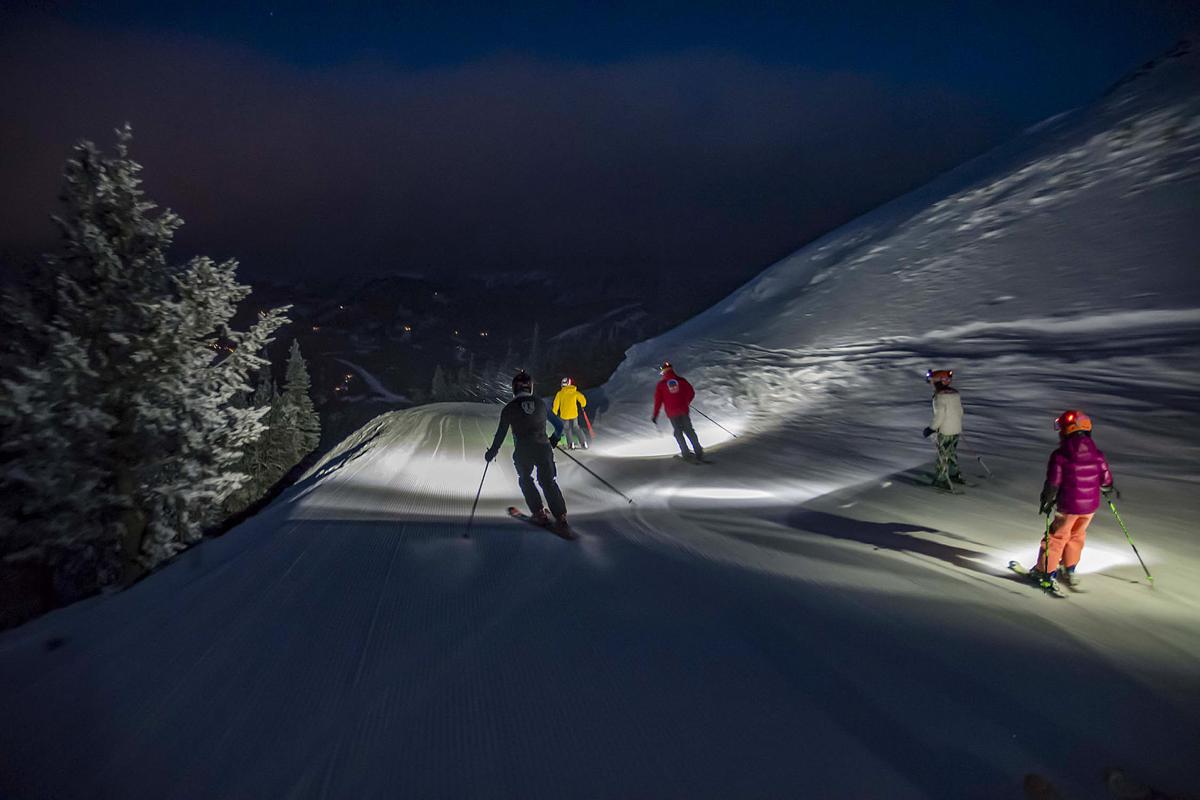 Skiers glide down a trail illuminated only by their headlamps at Big Sky Resort recently. The ski area is offering an exclusive experience for skiers and snowboarders to glide down runs after the lifts close. 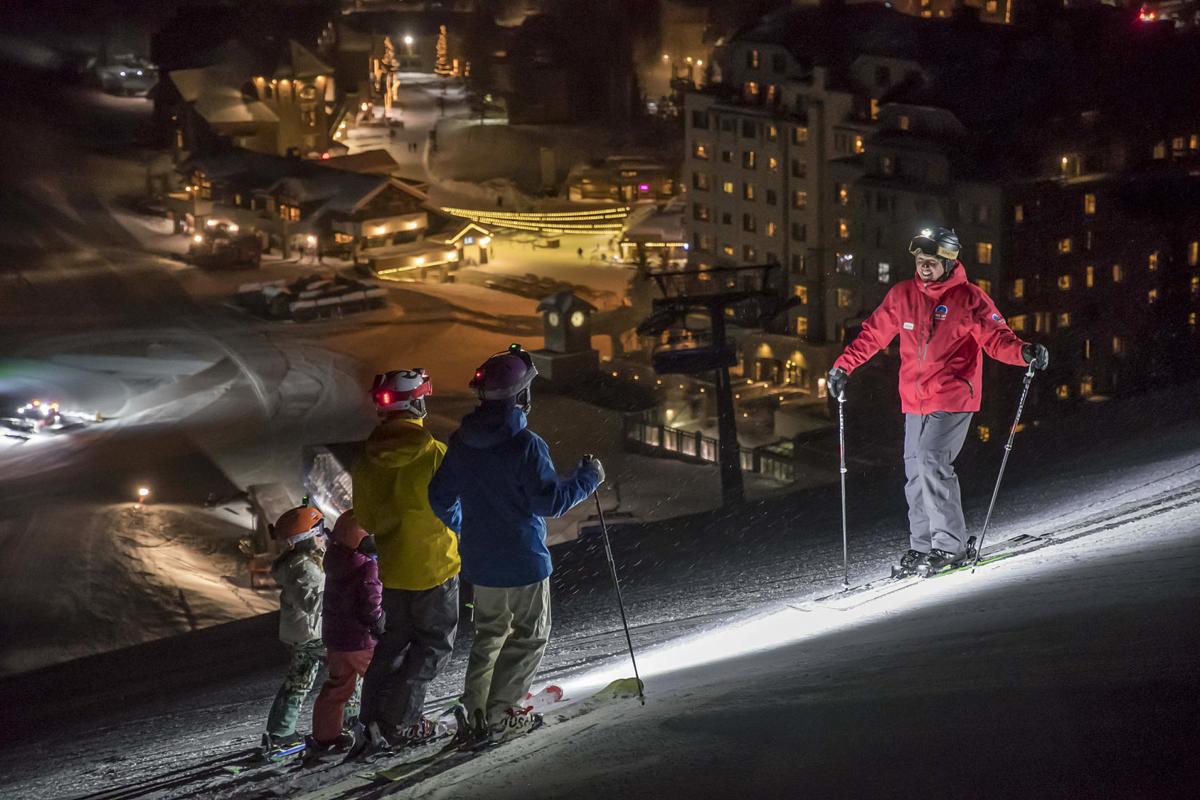 Stopping on the slopes and turning off headlamps to gaze at the stars and take in the quiet and lit scene below is one of the perks of night skiing at Big Sky. 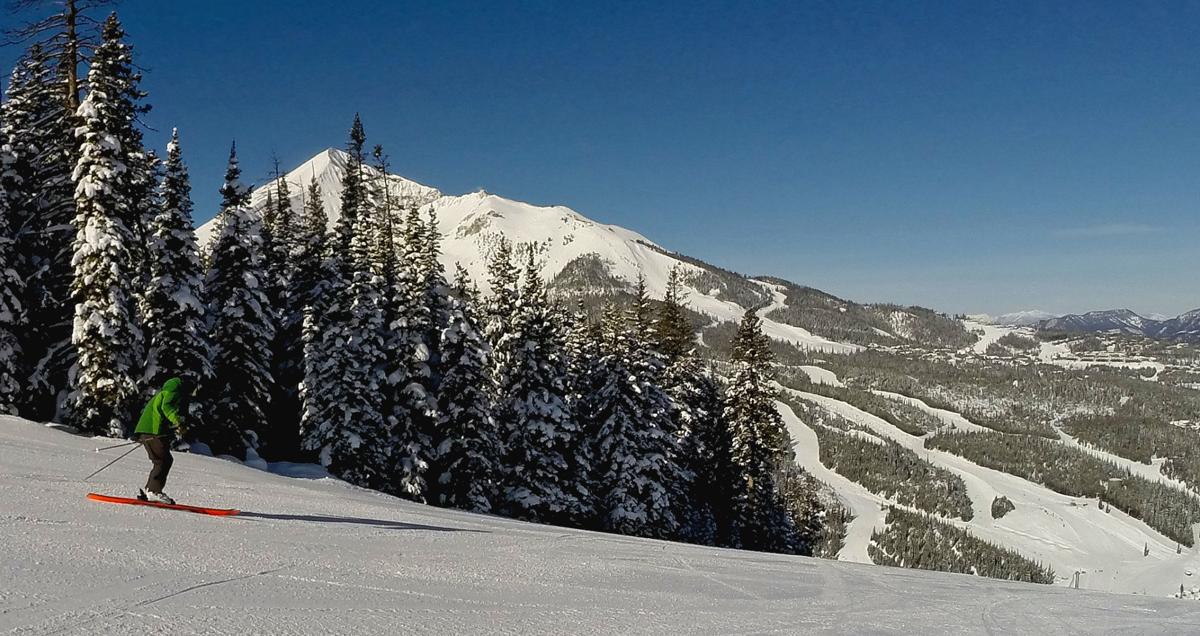 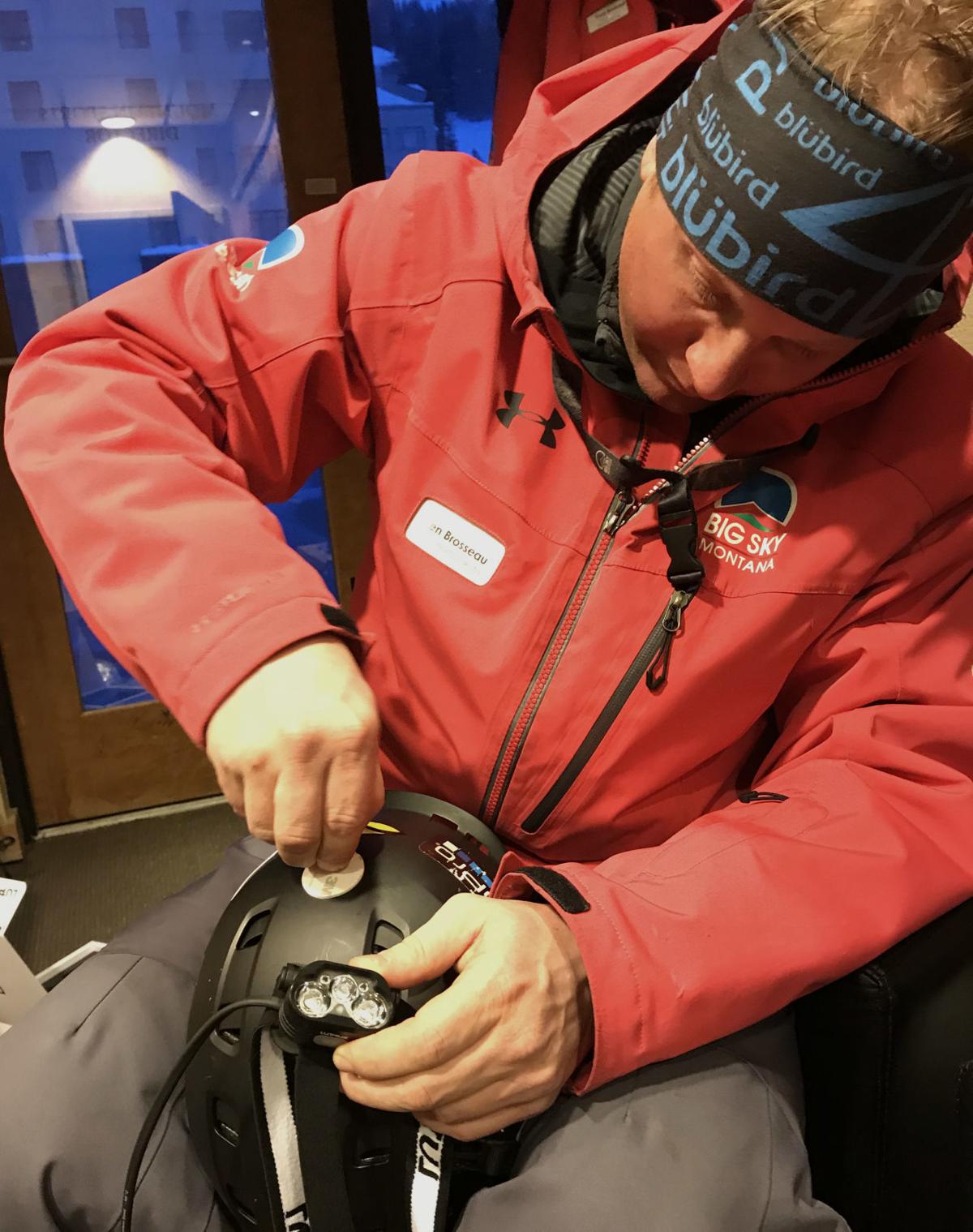 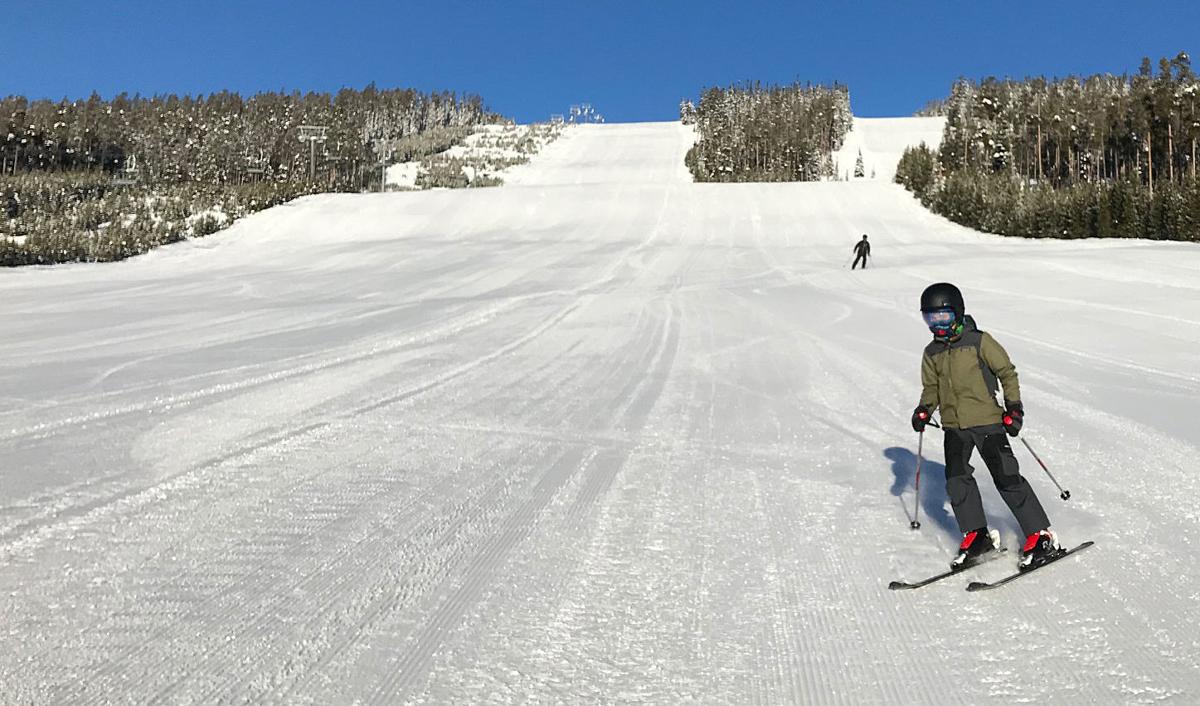 Long shadows are cast by the early morning light as the Emmanuel family from Brooklyn, New York, poses for a photo with Lone Mountain in the background. 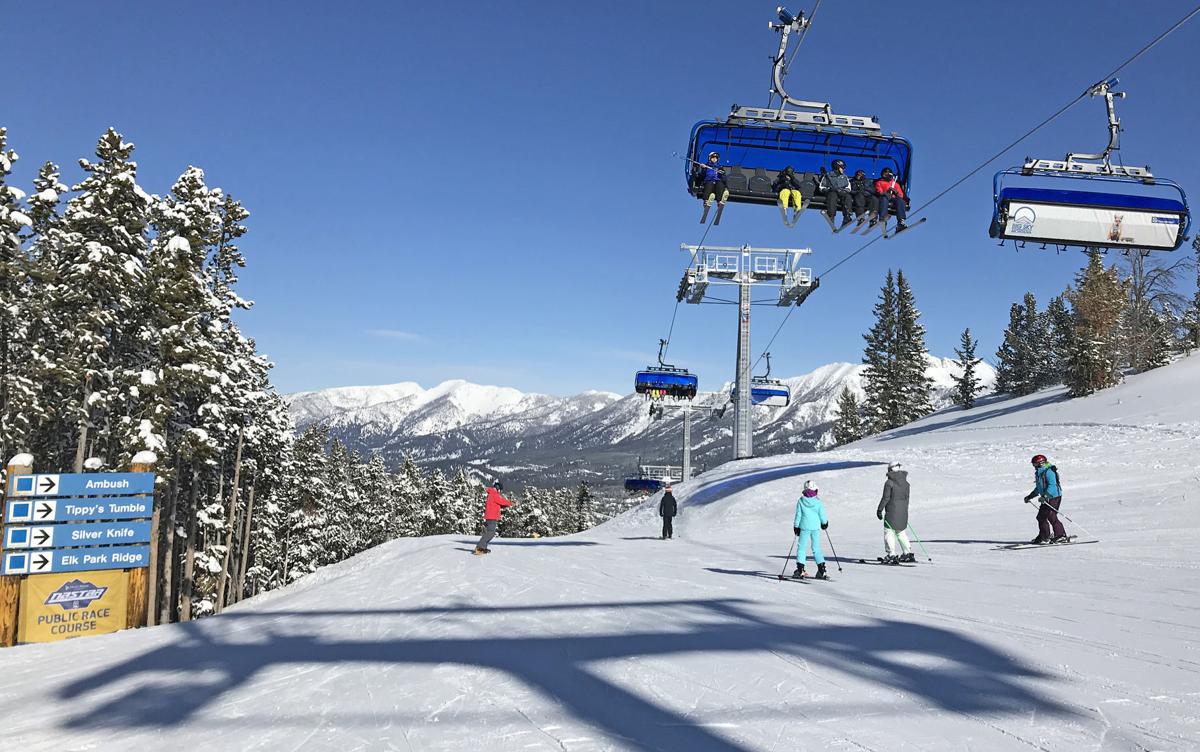 Big Sky Resort's new Ramcharger 8 is the largest chairlift in North America, holding eight passengers on heated seats that can be protected by a plastic blue bubble. 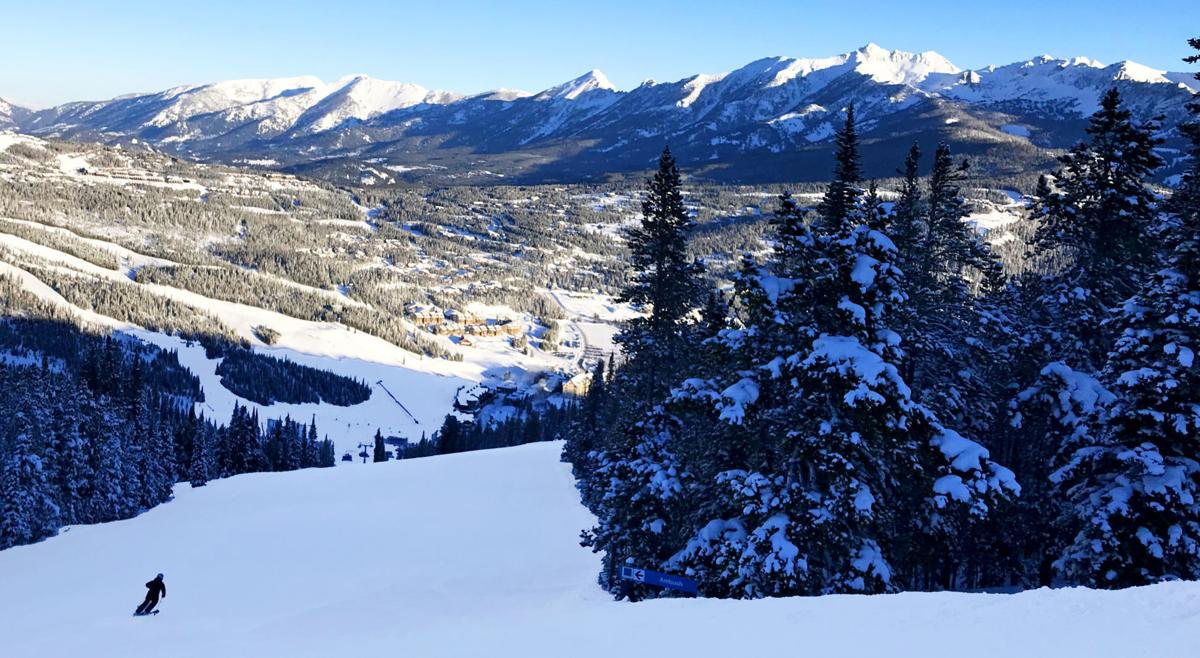 Skiers glide down a trail illuminated only by their headlamps at Big Sky Resort recently. The ski area is offering an exclusive experience for skiers and snowboarders to glide down runs after the lifts close.

BIG SKY RESORT — Like a controlled freefall into a dim cave, it was unnervingly dark as Ben Brosseau skied down aptly named Ambush run. A cone of bright white light shone in front of him. Just before he pushed off, a smile seemed frozen to his frosted face.

He was night skiing using a headlamp, a new opportunity for bold snowboarders and skiers looking for a unique experience, one that opens up portions of this mountain to no more than 25 people.

“It makes it more of a cool adventure, rather than doing it with the masses” under fixed lights, said Stacie Mesuda, public relations manager at the resort.

“It’s cool to know that it’s only you and maybe 24 other people on the hill,” an expanse of 5,800 acres crisscrossed by a spiderweb of 250 runs. At night the only other creatures lighting the hills are snowcats slowly grooming runs for the next day of skiing.

Big Sky Resort’s night skiing just opened to the public a few weeks ago. The cost is $390 for seven people, which includes a guide and the use of the 2,100-lumen Lupine Blika headlamps, which have a remote control that attaches to your ski pole.

Routes are limited to Andesite Mountain, accessed by the new eight-passenger heated Ramcharger 8 chairlift, which includes a drop-down bubble shield to block any windchill. The night skiing is offered between 6:30 and 8:30 p.m. Wednesday through Saturday.

“They have several paths they groom — Ambush, Tippy’s Tumble and Hangmans — steeper blue runs off the front side of Ramcharger,” Brosseau said.

He recommended skiers have goggles with clear or yellow lenses to maximize their night vision.

“It gives you a different perspective, that’s for sure,” he said. “I grew up night skiing on my home hill in North Dakota with fixed lighting. Doing it with a headlamp is a little different. You’ve got your light ahead of you. This thing is so bright you can turn it anywhere. It lights up the trees.

“If you have it faced down the hill from you, you’re just skiing the fall line below you. It’s really cool because it illuminates all of the texture of the snow, too, so it’s even more clear than it would be on a flat-light day. You can see every little nook and cranny in the snowpack, all the corduroy in the groomers.”

Humming her skis across the ripples of corduroy was thrilling for Mesuda, but the drop-offs were a little breath-taking.

“Going over a roller I feel a little bit of hesitation,” she said. “I hope this (snowcat) kept grooming over the hill,” she thought to herself. “There was a brief moment of praying.”

“I’m definitely not thinking about emails or what I have to do tomorrow,” Mesuda added, noting that night skiing seemed to require greater concentration. “I’m just focused on this groomer.”

The next morning, before the lifts opened to the public at 9, Mesuda was back on the slopes for another of Big Sky Resort’s exclusive offerings — First Tracks and Everett’s Breakfast. For 90 minutes starting at 7:45, skiers and snowboarders get the first shot at new snow or groomed terrain. The cost is $119 per adult or $99 for children ages 2-17 and is followed by breakfast at Everett’s 8800, a custom log restaurant atop Andesite Mountain. The combo is offered Wednesdays through Fridays.

First Tracks is also offered as a guided experience for $690 without breakfast for a half day of skiing. Reservations are required and the price covers two individuals. More folks can be added for an additional $25 each, up to five people. Each skier or snowboarder must also have a lift ticket.

Brosseau has done many of the half-day First Tracks trips, often starting off with a couple of laps on the Ramcharger lift to warm up. More often, though, the main attraction is being the first riders to the top of 11,166-foot Lone Mountain to pioneer the fresh powder.

“I would say the majority of our First Tracks people want to go up the peak,” he said. “Some want to do groomers or trees, but a lot of them want to get to the peak, especially on a day with new snow overnight. That’s a pretty cool experience.”

When the ski patrol is conducting avalanche control work in the morning, Brosseau has to be strategic about how to get his clients to the top. But once there, he can usually get in two to three laps before the lifts open and more skiers and snowboarders arrive.

In addition to the untracked powder, the view can be hard to beat, he said.

“Especially if you can get up there early in the morning when the sun is coming up. I’ve had some mornings when it’s foggy in the valley and bluebird on top and you're overlooking the valley” creating an otherworldly view.

Georgia and Augie Emmanuel made a few First Tracks runs on Andesite before having breakfast at Everett’s 8800. The brother and sister from Brooklyn, New York, were vacationing with their parents and enjoyed skiing when only a handful of others were on the slopes.

“I liked that no one had skied on the runs and they were smooth, and no one was coming at you,” said 13-year-old Georgia.

She’s been skiing eight years, often at resorts closer to home where the runs are icy and the lift lines long.

“Here the snow is so soft and powdery,” she said.

Augie, 10, echoed his sisters’ praise between bites of bacon and French toast swimming in sweet syrup.

“It felt like you had the whole mountain to yourself, which was true,” he said.

Other plans for Big Sky Resort

In the recipe book for Big Sky Resort’s continuing upgrades are more plans for new lifts on the lower mountain, said Stacie Mesuda, public relations manager at the resort.

The Swift Current chair, a high-speed quad and the longest lift on the mountain at 8,457 feet, will eventually be replaced. No date for that has yet been announced.

“The vision is that the existing chair, which is a quad, is going to move over to the Moonlight side for a terrain expansion on the Moonlight side of things,” Mesuda said. “And that Swift Current chair will be replaced with, this is the quote I got, ‘with an appropriate-sized bubble chair,’ so six or eight, I don’t know. I imagine it will be bigger than four.”

Swift Current is the main access point to reach Lone Mountain’s peak and The Bowl beneath it.

After that work, Big Sky’s management envisions removing the two-passenger Explorer Double chair and replacing it with a gondola. Explorer takes about seven minutes to climb 3,700 feet to access beginner and intermediate terrain.

“So the gondola will have a new mid-station with a restaurant, potentially some meeting space, and space for ski school up there,” Mesuda said. “There’s a lot of options what we could do with that. Then that gondola after the mid-station will continue to extend up into The Bowl. So up basically to where Powder Seeker (high speed six-passenger chair) is. That’s a good way to alleviate some of the pressure off Swift Current and have two major access points out of the base area.”