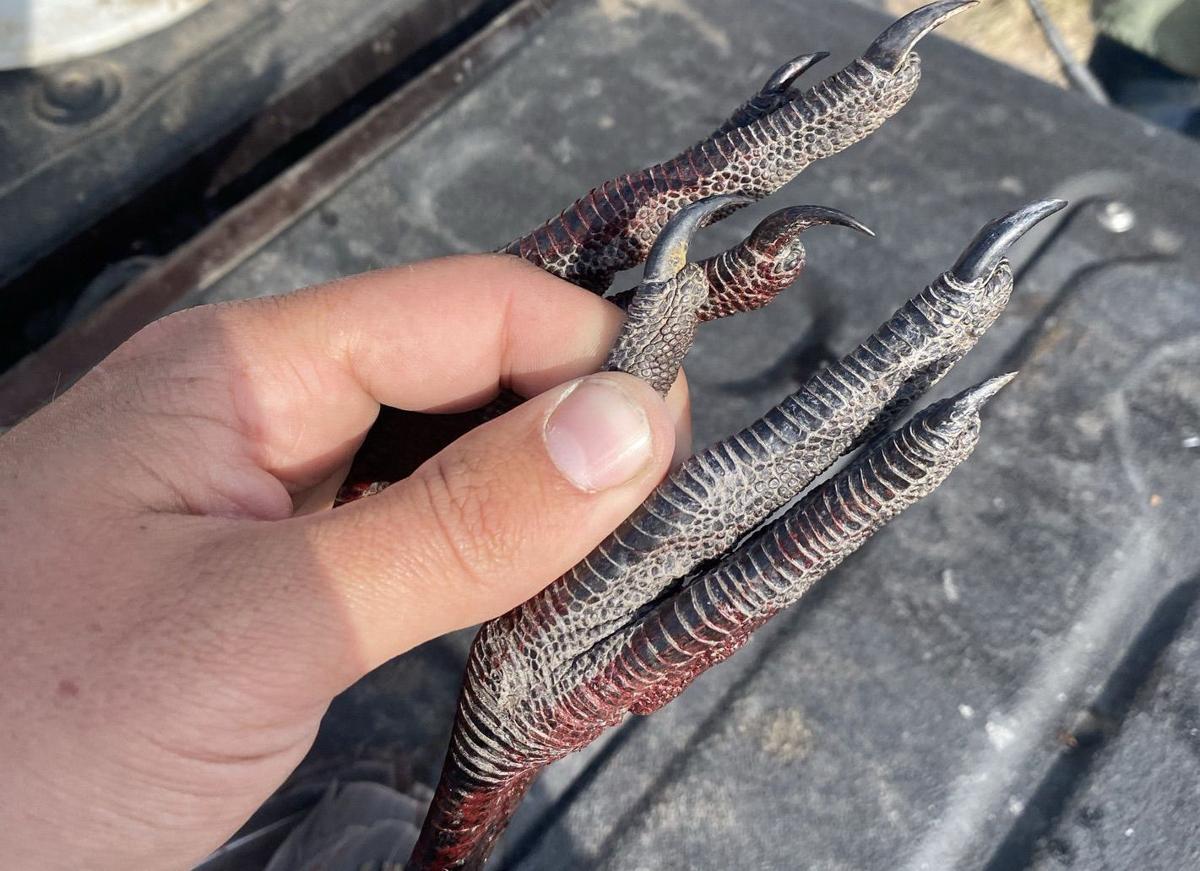 A closeup shows the long clawlike feet of a sandhill crane. 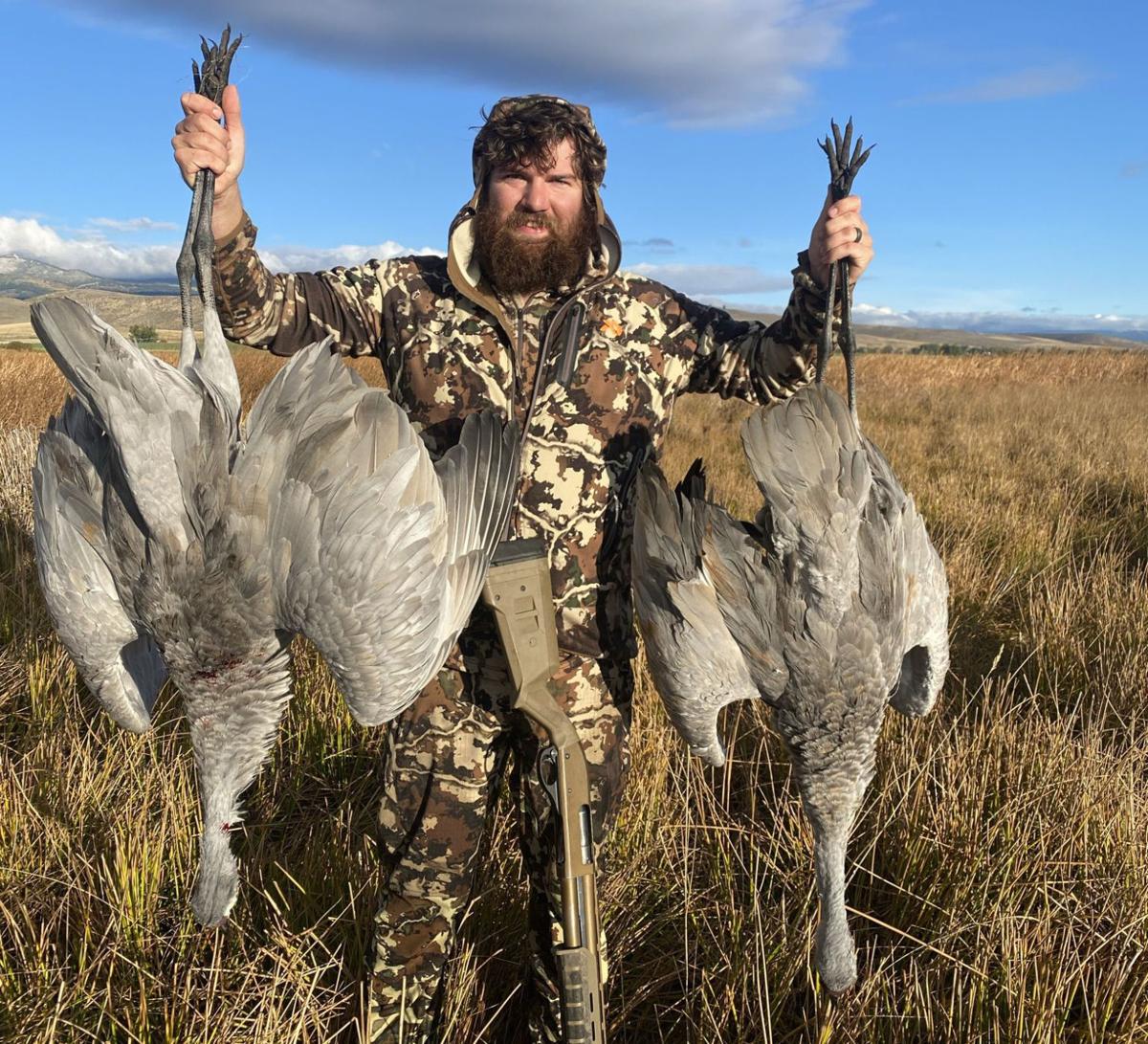 Not paying attention in a blind, no matter how slow the hunting, has an odd way of making things happen.

That’s the way it went for Wes Baker. He, his dad and a buddy were sitting in a field near Idaho's Bear Lake with a spread of sandhill crane decoys in front of them. The gangly birds were flying but shunning their setup.

Bored and discouraged, Baker started looking at his phone.

“All of sudden I look up, and there are six of them right in our lap — right above us,” he said.

Sandhill cranes are lanky, grayish-brown birds that stand about 4 feet tall on stick-like legs. They have sharp beaks, red skull caps and a squeaky, chattering call that is sometimes incessant.

But they were unknown to Baker. He used to work for the Idaho Department of Fish and Game at Lewiston. One day he walked into the office of the late Mark Hill, the lead conservation officer for the Clearwater Region. Hill had a mounted sandhill crane behind his desk.

“I said ‘What the heck is that thing?’ ” he remembers thinking. “I’m from north Idaho and had never even heard of these things before.”

Not long after, Baker got his first look at live sandhill cranes while working at the agency’s Red River Wildlife Management Area near Elk City. But he heard them first.

“I was trying to figure out what that obnoxious noise was, and there is these two just gigantic birds in a field. They make an awful racket,” he said. “They are just the most obnoxious birds. It’s like it’s never-ending.”

Those two experiences planted a seed. Baker, an avid hunter, thought of them each time he thumbed through the back pages of Idaho’s migratory bird hunting pamphlet, where the regulations for the state’s short crane season live. Then last year, he got a first-come, first-served swan permit in the Panhandle region and bagged one of the birds. Why not, he thought, try for a sandhill next.

Sandhill cranes can gather in large numbers and damage grain, corn or alfalfa fields. Because of their large wing spans, even just landing and taking off in grain fields can cause damage, said Toby Boudreau, chief of the Idaho Fish and Game Wildlife Bureau.

They are seasonally abundant in southeastern Idaho and in the lower Columbia River basin of Washington. They are protected in the Evergreen State, but hunting is allowed in parts of 16 states including Idaho and its neighbors Montana, Wyoming and Utah.

Idaho turned to hunters as part of a strategy to reduce crop damage. It awards permits in the southeastern part of the state on a first-come, first-served basis and adjusts the numbers available annually based on population trends in several Western states.

In each of the state’s hunt areas, some properties, known as lure fields, are off-limits to hunting. The idea is to harass the birds out of the majority of crop fields but teach them they are safe in the lure fields. Farmers who volunteer their fields as bait, are compensated by the Idaho Department of Fish and Game.

“The whole idea is to help keep cranes out of grain fields,” Boudreau said.

Baker, his dad and friend secured permits for the Bear Lake hunt area, did their homework and consulted with friends who live in the area but otherwise hunted blind. Making their schedules line up was a challenge, so instead of hunting the opening weekend when birds are less wary, they hunted during the third week of the season. By that time, most of the wheat fields had been harvested, and the birds had been shot at enough that they were suspicious of anything that looked out of place.

On their first day, the men explored, looking for fields with cranes and then contacting landowners for permission. Baker said most of the farmers don’t like the cranes and the damage they can cause. So they are often willing to let hunters use their fields.

“It was way easier than I ever expected to get permission,” he said.

At one field, they tried to sneak up on the birds.

“We belly-crawled along this grown-over fence for about 700 yards and go to jump these cranes,” he said. “We think we are a lot closer than we are. They are so big they look like they are in range, but they were never in range.”

They went back to scratch and while trying to figure out how they should hunt another field, a stray flock flew over the men. They unloaded and got one.

“We were ecstatic. We were on the board,” he said. “It wasn’t really what we had planned, but it worked.”

Later that day, they fell back to more traditional methods and set up decoys in a field, found some cover and waited. But not a single flock gave them more than a glancing look.

The next morning was their last chance. They planned to hunt for a few hours and then start the nine-hour drive home. Baker said they set up decoys in a field the birds had used the day before. Soon the cranes were flying.

“You can hear them from like a mile away just making an awful racket. Some fly way to the right, some fly way to the left,” he said. “It’s like they know they are being hunted, so they don’t follow any pattern.”

That’s when Facebook, via his phone, provided a distraction and maybe, too, a spark. He was looking at his phone and reading a post and glanced up just to check. The flock of six sandhill cranes was right on top of them, half to the left and half to the right.

It worked out, and they were ready for the long haul home to Coeur d’Alene. But one of the birds made it to some cattails. The men spent two hours slogging through the small wetland unsuccessfully looking for the bird.

Idaho allows sandhill crane hunters to use lead shot. Baker recommends heavy loads to bring them down. The birds are long but thin.

“Their necks are tiny, their heads are tiny and their body is pretty small,” he said. “They have a pretty squatty body.”

But they are also hardy.

“We were using lead coyote loads, like 3-inch magnum BBs. We started with 3-inch number 5s, and it didn’t even ruffle a feather.”

Sandhill cranes have a reputation as great table fare. So good they’ve been given the nickname ribeye of the sky.

“It’s very true, 100 percent,” Baker said. “Literally the best. It would be a very close tie for sandhill crane and rough grouse.”

Signs of spring amid the coronavirus pandemic

These are the times that try our souls. Isolation, face masks, drugs and diseases that are difficult to pronounce, let alone understand.

A closeup shows the long clawlike feet of a sandhill crane.