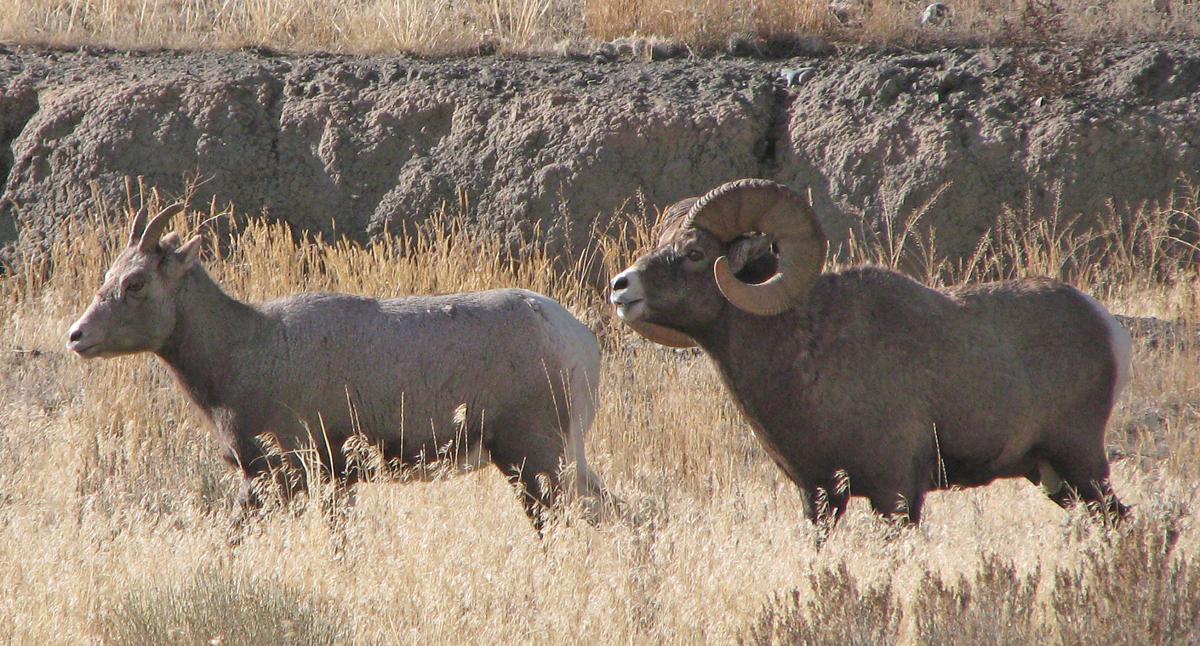 Hunters are fearful that a new herd of domestic sheep and goats in the Missouri Breaks could pose a threat to the largest herd of bighorn sheep in the state. 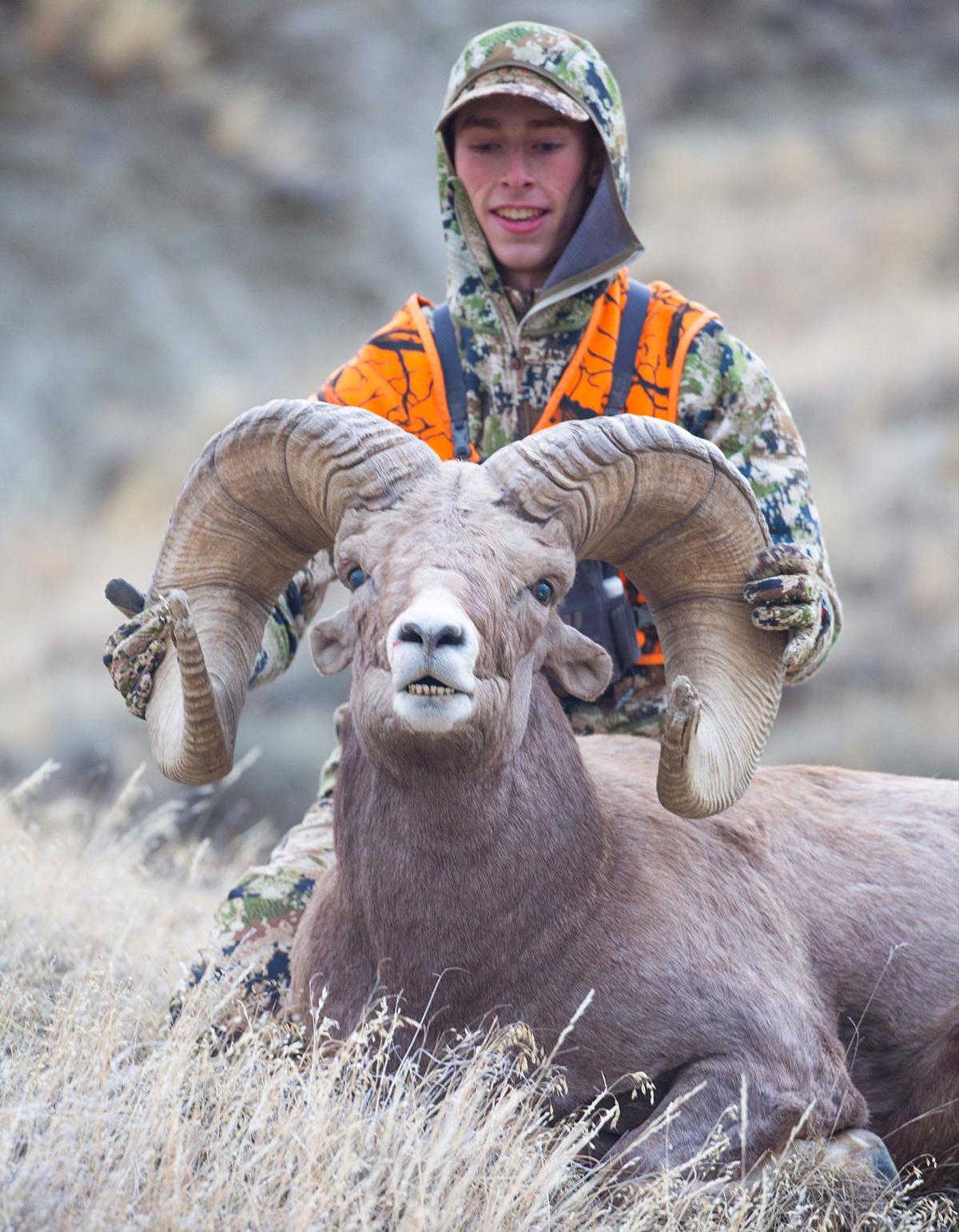 Justin Sheedy holds the horns of the bighorn sheep he shot last October while hunting in the Missouri River Breaks. The ram has scored 208 3/8.

A Montana ranching family’s decision to run a herd of goats and sheep in a region that supports the largest bighorn herd in the state, and was home to a new state-record ram, is giving some hunters heartburn.

“The Missouri Breaks is probably one of the most … sought after licenses anywhere,” said Kevin Hurley, vice president of conservation and operations for the Wild Sheep Foundation in Bozeman.

Within the past year the Brown family has reportedly stocked about 500 head of sheep and goats on their ranch near Big Sandy, north of the Missouri River. Ironically, Bill and Renita Brown also own Chase Hill Outfitters, which includes guiding bighorn sheep hunters as one of its services.

The hunters' fear centers around scientific studies that have shown the domestic animals carry pathogens that — if the wild and domestic animals interact — could lead to disease and death in the bighorn population.

The pneumonia-causing bacterium Mycoplasma ovipneumoniae, or M. ovi for short, has long been associated with domestic sheep and goats. More recent studies by the U.S. Department of Agriculture have shown M. ovi presence in wildlife, including moose, deer, bison and caribou. Bighorn sheep die-offs in Montana and other western states have been tied to M. ovi infections which lead to death by pneumonia.

Although even healthy bighorn sheep carry pathogens that can cause the pneumonia, it only seems to be fatal when the animals are stressed or don’t receive proper nutrition, according to Bob Garrott, a professor of Ecology at Montana State University in Bozeman.

Garrott has teamed with an FWP wildlife researcher in a 10-year study of bighorn sheep in the Greater Yellowstone Ecosystem and a six-year study of other herds in the state. The work has prompted Garrott to question whether domestic sheep and goats are as dangerous to bighorns as previous research has indicated.

Hurley said his conservation group has spent millions trying to understand the causes of bighorn sheep deaths and one thing always stands out.

“Separation does reduce or eliminate pathogen transmission,” he said. “Separation in time and space is still, we think, the best solution.”

Dave McEwan, former president of the Montana Wool Growers Association, disagrees that domestic sheep and goats are a threat to bighorn sheep in the Missouri Breaks or anywhere else. He points to other areas where bighorns have died without coming into contact with domestic sheep.

“It’s time to quit blaming the domestic sheep owner for the problem with bighorn sheep,” he said.

Montana has about 6,000 bighorn sheep spread across 48 herds. The majority, 70 percent, are small bands with populations under 100 animals.

Other agencies have been more inflexible. Wyoming’s Shoshone National Forest has gone so far as to ban pack goats, used by backpackers and hunters to haul gear, near its larger native bighorn herds.

“I think there’s a whole bunch of ignorance going on here,” McEwan said, adding that “the problem of doom and gloom on the river” is overblown.

The Browns' ranch is in Hunting District 680, an area that includes a resident bighorn sheep herd as well as transients that migrate from the south across the Missouri River. According to FWP data, 97 hunters spent 475 days and killed 71 bighorns last hunting season in HD 680. Of that total harvest 25 were rams and 46 were ewes.

It is notoriously difficult to draw a bighorn ram tag in the West because so few are offered and so many hunters apply. Circumventing the drawing system are wealthy hunters who are willing to pay thousands of dollars at auction for a tag that some states provide to conservation organizations to raise money for bighorn sheep management in the state. According to FWP’s online data, between 1997 and 2012 the annual auctioning of 16 Montana bighorn ram tags brought in more than $2.9 million.

Given the quality of rams that Montana is producing, especially in the Missouri Breaks hunting districts, it makes sense that those Montana tags attracted high bids, said Hurley of the Wild Sheep Foundation, which has hosted the most recent auctions.

In 2017 Bozeman hunter Justin Sheedy shot a ram in HD 680 that the Boone and Crockett Club scored 208 3/8. That score tied it for the largest hunter-shot world record at the time. It’s also the largest bighorn ever killed in Montana.

John Lewton, a Bozeman-area sculptor and bighorn sheep advocate who accompanied Sheedy on his hunt, called the Missouri Breaks bighorn sheep populations “the best in the United States.

“It’s the jewel of the state in my mind,” he said. “It’s something spectacular.”

Bill Brown obviously recognizes the significance of the wild sheep, too. He posted a photo on his outfitting businesses’ Facebook page with the ram he shot last hunting season after 31 years of putting in for a tag.

Yet outfitting bighorn sheep hunts while raising domestic sheep has put Brown at cross purposes with the Montana Outfitters and Guides Association, a professional organization that represents more than 200 outfitters and guides across the state.

“Bill has offered to voluntarily step away from MOGA, and we will accept that.”

Like everyone who commented for this story, Minard stressed that the Browns have the right to do as they wish on their land. Private property rights are sacred in Montana, and no one was going to challenge that privilege.

With that in mind Montana Fish, Wildlife & Parks officials have reached out to the Brown family in search of a shared solution.

“We made it known we had a disease concern,” said Scott Thompson, wildlife manager for Region 6 in Glasgow.

The agency offered some advice on ways to avoid co-mingling of the species, he said.

“The landowner didn’t share the concern and wasn’t interested in working with us,” Thompson said. “That doesn’t mean we wouldn’t (work with them) in the future. For now, we’ll be respective of private property rights.”

More broadly, FWP’s Quentin Kujala said his agency has been in conversations with the wool growers’ industry to seek collaborative ways to address issues that arise between wildlife and domestic livestock in general.

“If we don’t figure out how to do things in a collaborative manner we’re not going to get very far,” Kujala said.

Likewise, the Wool Growers public information contact, Helena attorney Jim Brown, said his group’s position is that working on a memorandum of understanding to collaborate with FWP could resolve the issue with the Browns, but that’s their choice.

Brian Solan, of the Wild Sheep Foundation, said he has talked with Bill Brown and agrees that the landowners have every right to do as they wish on their private property.

“We don’t want in any way to be disrespectful,” he said. “However, it is an additional risk to wild sheep. It’s clear that they have a different view of that.”

Solan said his group is willing to assist in any way it can to keep the wild and domestic animals separated, whether that means guard dogs or fencing.

Yet the concern about the Missouri Breaks sheep is different than what the Wild Sheep Foundation is advocating in other parts of the state, he noted. In other regions the group is pushing FWP to introduce new herds to spread populations into more areas.

“We understand the irony of that,” Solan said, “but this is the crown jewel.”

Adding to the stew of discourse over the situation is the fact that Lewton, who posted his concerns about the Browns' livestock on Facebook, and Bill Brown have a history of confrontation in the past. Lewton was charged with illegal outfitting in a Montana Fish, Wildlife & Parks sting operation in 2009 in which an undercover FWP warden shot a trophy ram. Lewton was found not guilty following two jury trials.

During one trial, however, Bill Brown testified that Lewton had trespassed on his property to reach the bighorn sheep that the FWP warden killed.

Lewton’s lawyer at the time framed the issue as Missouri Breaks outfitters scheming to get his client in trouble because he was taking business away from them.

When reached for comment Renita Brown said she wasn’t comfortable discussing the issue.

“We’re just trying to make a living in farming and agriculture,” she said. “I’ll be plumb honest, we don’t have enough time to go on Facebook.”

A Lincoln man caught a state record walleye on Sunday, but North Dakota Game and Fish Department officials are looking into it a bit further.

Residents hope for a change to the winter bison hunts conducted in the Gardiner Basin just north of Yellowstone National Park. There, they say the area turns into a "kill zone" — a place where as bison cross the park boundary they are fair game for hunters.

GARDINER — Bison managers are thrilled with the movement of five bison to the Fort Peck Indian Reservation, and they hope it’s a sign of thing…

A popular Fish, Wildlife & Parks program in northeastern Montana's Region 6 that allows children and their friends or families to check ou…

A study led by Blake Lowrey found notable distinctions in the migrations of different types of bighorn sheep herds. Native herds that have never been removed from historic ranges retain more diverse migratory patterns than restored and augmented herds.

Hunters are fearful that a new herd of domestic sheep and goats in the Missouri Breaks could pose a threat to the largest herd of bighorn sheep in the state. 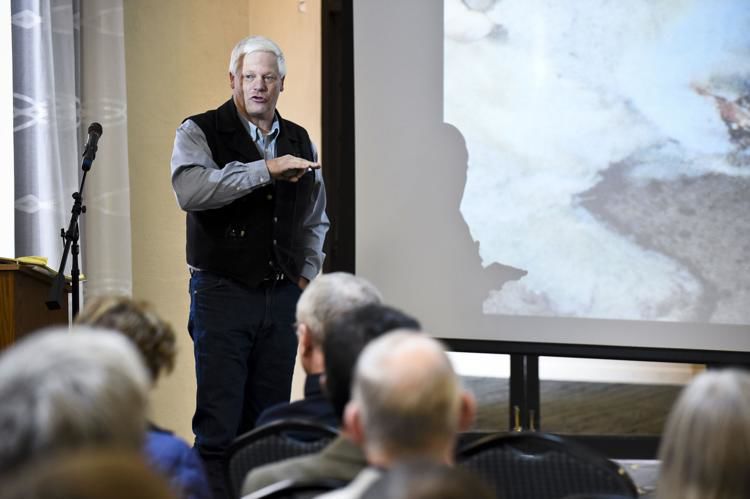 Past president of the Montana Wool Growers Association Dave McEwan said domestic sheep and goats do not present a threat to bighorn sheep.

Justin Sheedy holds the horns of the bighorn sheep he shot last October while hunting in the Missouri River Breaks. The ram has scored 208 3/8. 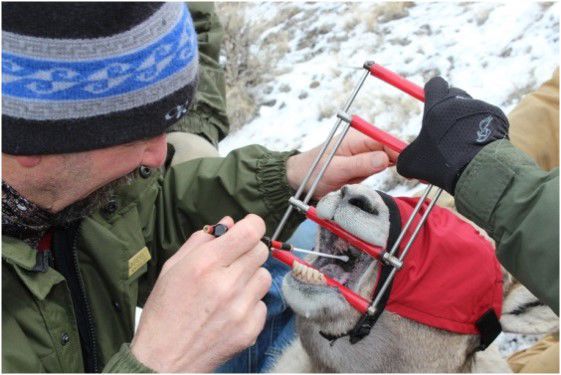 Using a device to prop open a bighorn sheep's mouth a researcher collects a tonsil swab for detecting pathogens. 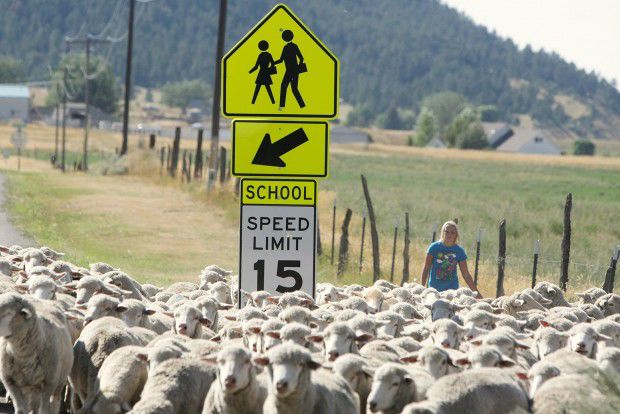 The sheep industry has a long history in Montana, honored every year in Reedpoint with a sheep drive. 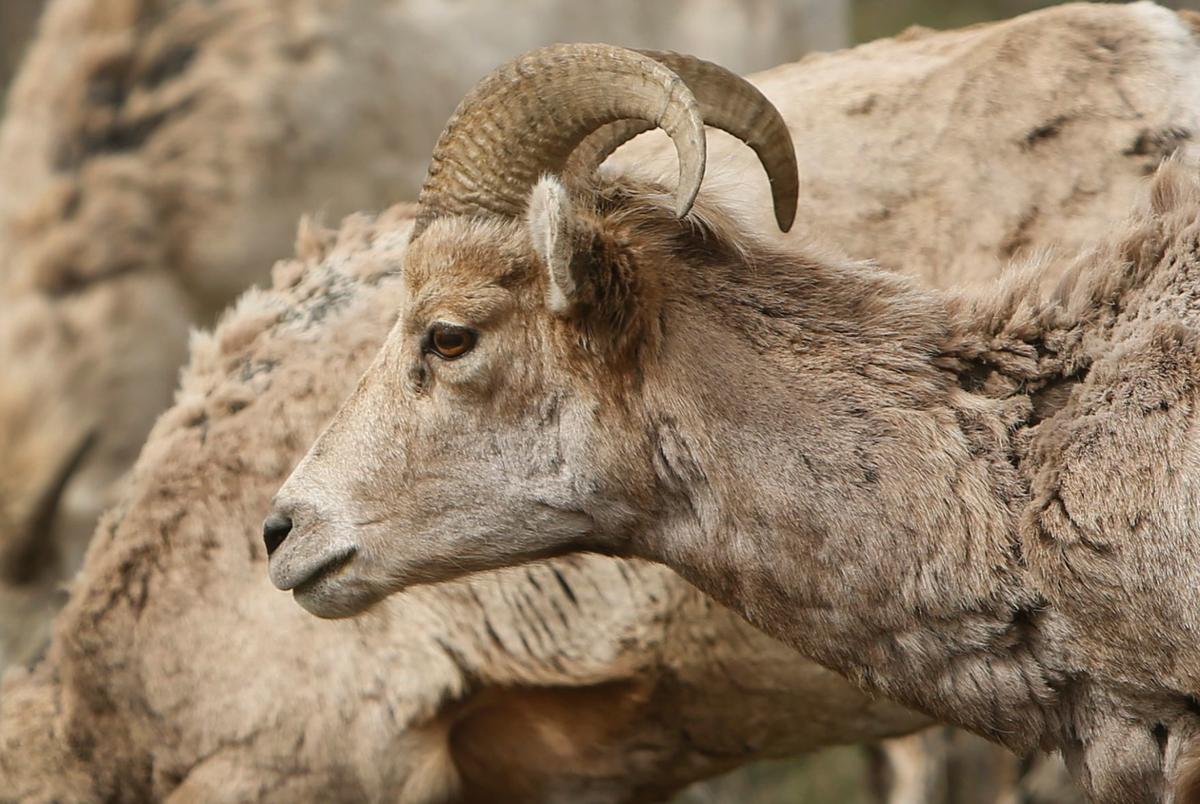 A bighorn sheep pauses while grazing along the road near Yellowstone River in Yellowstone National Park.