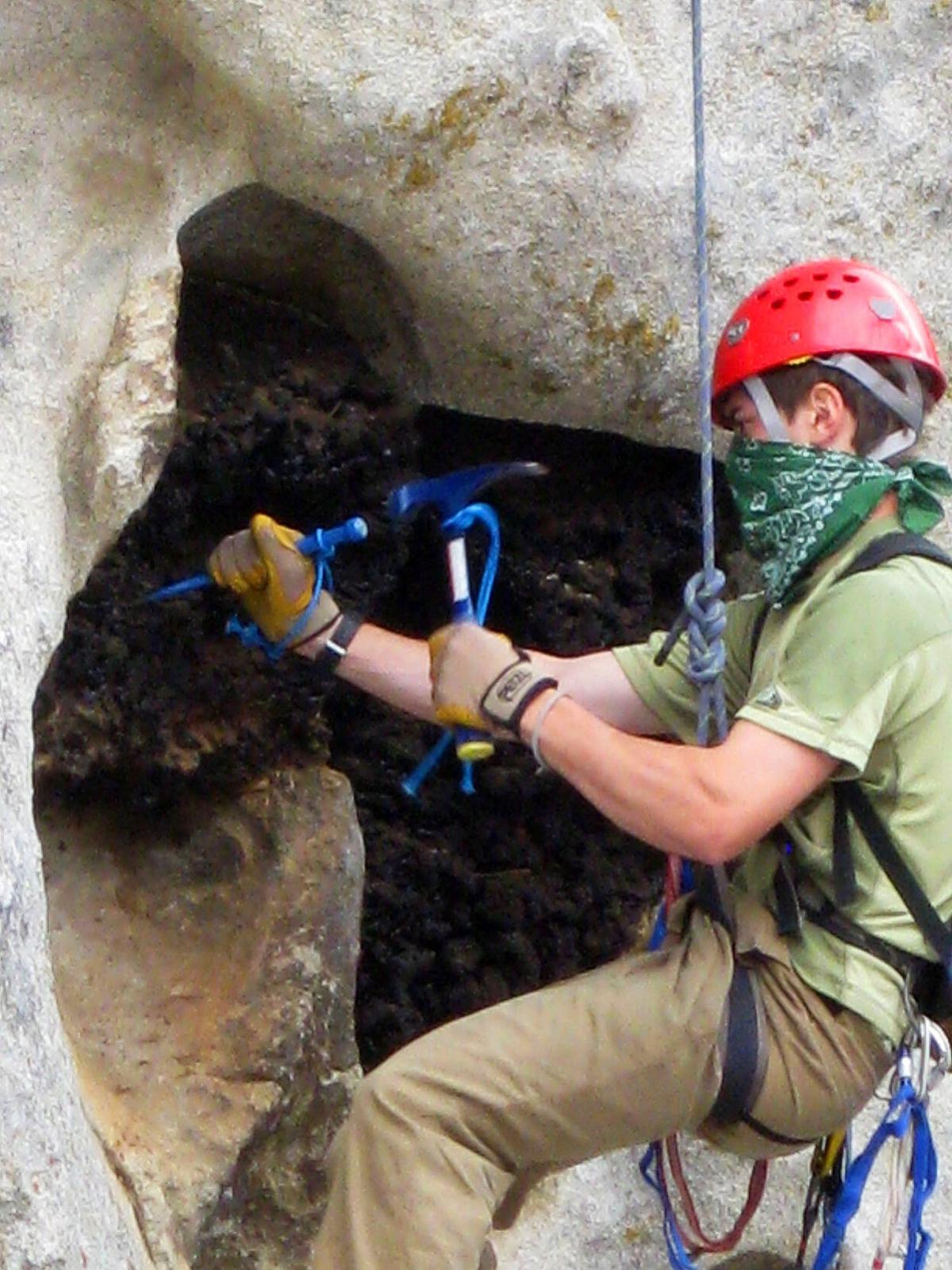 A technical rock climber recruited by researchers collects pieces of a pack rat midden at City of Rocks National Reserve in Idaho during a study. This midden was radiocarbon dated at 5,200 years old. 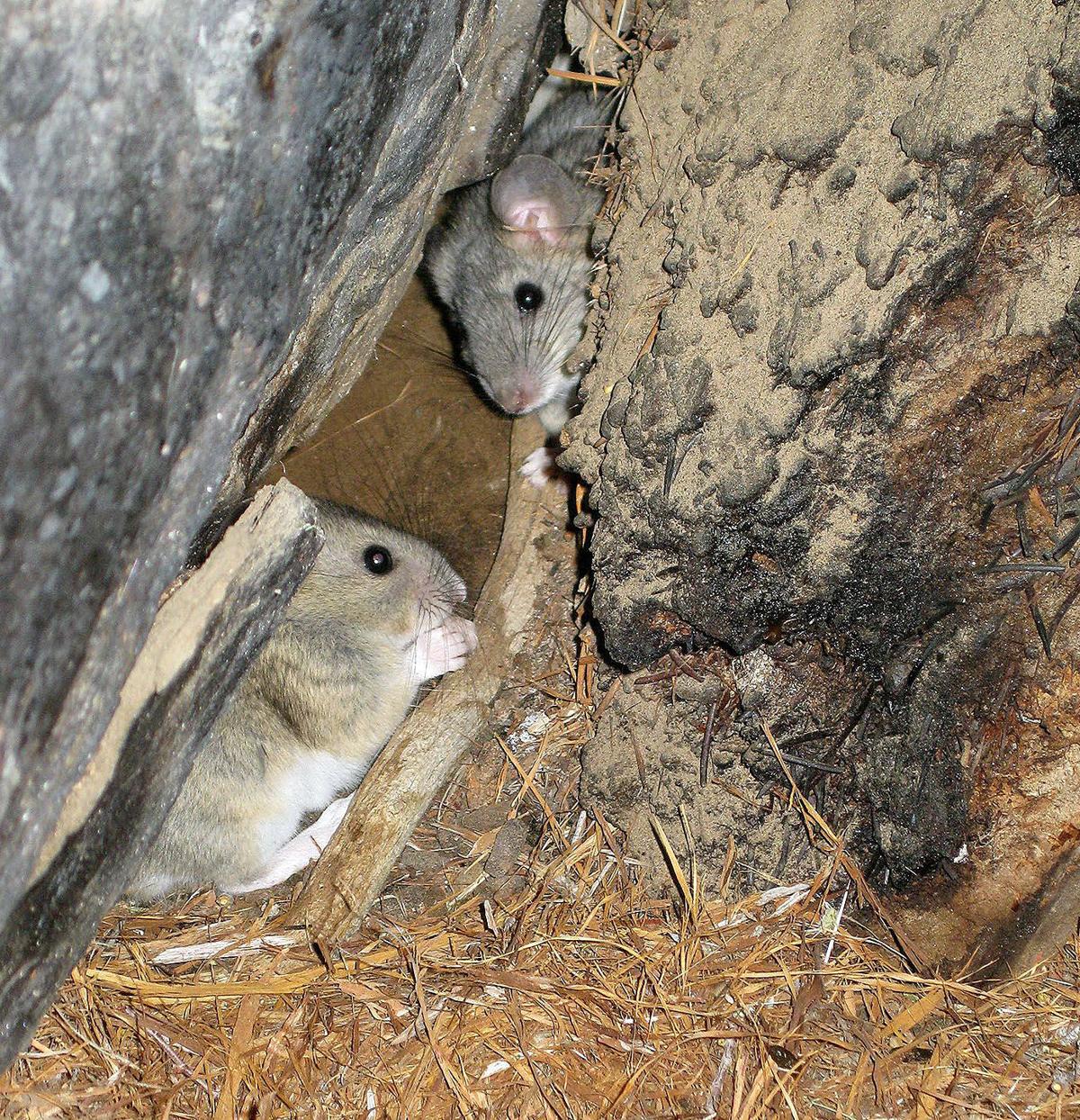 Pack rats peek out behind a rock on top of their midden at the City of Rocks National Reserve in Almo, Idaho.

This is one case where a rodent’s penchant for hoarding, collecting and thievery has been turned into a scientific treasure trove of information.

These treasure troves are being mined in particular at Idaho’s City of Rocks National Reserve near Almo.

Pack rats have a deserved reputation for stealing all things bright and shiny, including pull tabs, rings, wristwatches or keys. But even those pack rats that live far from humans still comb their surroundings gathering a bit of everything — plants, sticks, stones, bones and dung — and pile it into their living space called a midden. They can’t help themselves. It’s what they do. Over the lifetimes of a pack rat family, a midden can become quite the impressive mess. Although it looks like soft goo tucked into a crack or notch, it’s rock solid.

What makes the midden blob hard and incredibly long-lasting is pack rat pee. At the City of Rocks National Reserve, scientists studying middens have carbon-dated the contents of some middens to be 45,000 years old — particularly near the Twin Sisters rock formations. The middens are found in small caves or behind rock overhangs protected from the weather. In some cases, reaching the middens is done with the help of rock climbers.

“They’re hard as a rock, kind of black, big chunks, sometimes huge chunks of pack rat deposits that have been consolidated, cemented by the crystalized urine of pack rats,” said Julio Betancourt, a semi-retired U.S. Geological Survey scientist who has studied and cataloged the contents of middens across the West and in South America. “The pack rats are just collecting tons of stuff and don’t go very far to collect it — mostly within 50 meters. The spatial resolution is really high. We’ve studied all kinds of things in these deposits. The principal thing is plant remains.”

Listening to Betancourt describe his midden studies is like attending a college science class.

This summer, Claire Veseth, an Idaho master naturalist from Boise, was hiking with friends at the City of Rocks and noticed large middens hanging from the rocks.

“I tapped it with my hiking pole and I said, ‘this stuff is hard as a rock,’ ” Veseth said. “Then we noticed the silver tag below it with a little circle nailed into the rock. It said ‘576’ on it. I said somebody is looking at these things.”

Veseth contacted Betancourt and learned of his studies of middens at City of Rocks and elsewhere.

Essentially, the crystalized urine becomes a time capsule, a snapshot of what the ecology was like at the time the pack rat lived and gathered. A sample piece of midden dated to 10,000 years ago is on display at the City of Rocks visitors center in Almo.

“When you get a sample out of these middens it’s rock hard,” Betancourt said. “We clean them off really well. Then we take it back to the lab and clean it up some more. Because the piss is crystalline urine and water soluble, we throw it in a bucket of water and it dissolves over a period of a week or two and it releases all of these plant remains that the pack rats collected. Then we put it through a geologic sieve. Then put it on a paper plate and dry it. Then we sit there and sort it. We separate out stuff that we’re going to analyze. Many of the plant fragments are in pretty good shape. We can identify oftentimes the species.”

Gathering well-preserved ancient plants gets paleoecologists excited. By studying the plants that existed through the ages at the City of Rocks, Betancourt said he and his team can track the climate and major vegetation changes dating back nearly 45,000 years.

“At fairly high resolutions we can tell the timing of plant migrations,” Betancourt said. “We’ve done that for Utah juniper, and we’ve done that for the two main species of pinyon pine and for ponderosa pine in the central Rockies. One of the things that’s always interested me are these isolated outposts of particular species.”

Betancourt points to City of Rocks’ famous pinyon pine trees as an example of what the pack rat time machine reveals.

One question the midden plant information helps researchers explore is what affects fire regimes in the past centuries: Is it drought times or wetter times with thicker vegetation?

“Now that we have this vegetation record, it’s an incredible luxury that we can start looking at the chicken-and-egg question,” Betancourt said. “What comes first, the change in vegetation or the shift in fire regime? And also, the erosion in sedimentation regime?”

One new research tool coming available in recent years is metagenomics. This allows researchers to study a mass of genetic material from a site and possibly find more information on plants and animals that existed at a certain time.

“It helps identifying species and finding stuff that we couldn’t have found otherwise, like pathogens for example that affect both plants and animals, we could discover in these middens,” Betancourt said. “A lot of other animals pass through those middens, and they leave behind their own piss and poop and hair and stuff. You can start getting a little bit better view of the whole biotic community contributing.”

Now that there’s an archive of material gathered from middens across the West and at City of Rocks, Betancourt said other scientists have been reaching out to him for specifics on a variety of research projects.

“People will say, ‘Hey Julio, I see that you’ve identified desert lavender from all these middens in the Sonoran Desert, and could I get from you feeds of this species between 10,000 and now over this geographic domain? I have this interesting hypothesis I want to test.’ If I’ve got it, I’ll give it to them,” he said. “It’s not just me doing it, but anybody who’s got a rational plan to use the material.”

“These pack rats are still at work building a record. A time capsule is the right word,” Betancourt said.

A technical rock climber recruited by researchers collects pieces of a pack rat midden at City of Rocks National Reserve in Idaho during a study. This midden was radiocarbon dated at 5,200 years old.

Pack rats peek out behind a rock on top of their midden at the City of Rocks National Reserve in Almo, Idaho.